Off To The Football

It might have taken me nearly 3 years since we moved to Bulgaria, but yesterday I finally managed to go to a football match. It is something that Peter (Dad) and I have been planning to do for quite some time, but trying to find out who is playing when and what time does it all happen has proved somewhat difficult. Just over a week ago I was told that Lokomotiv Gorna Oriahovitsa were playing at home this weekend just gone and that the kick off would be at 5 o'clock. Dad was definitely looking forward to it as much as I was, but first we had the car boot sale at CampingVT to get through.

Whilst we were at the car boot sale, we met Pat and Nev amongst others. Now Nev really likes his football, and his eyes lit up when Net mentioned that Dad and I were going to watch football. Net even asked Pat if Nev was allowed to go with us, and permission was duly granted. It was arranged that I would pick Dad up at about 4 and then Nev round about quarter or twenty past. Needless to say with one thing and another I was late picking both up, and consequently we missed the kick off. 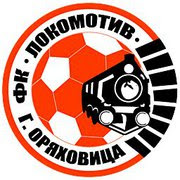 We parked up and went round to the gate, there were no turnstiles, but there was the normal security bloke and a lady with a carrier bag. All tickets are one price, which does make it very easy. So 3 times the entry fee cost us the princely sum of 3 Leva. Our entry fee duly paid we strolled on into the ground, as we were not assigned seats we were really quite spoilt for choice as to where to sit. The majority of people seemed to have headed towards the main stand, so we thought why not and headed over that way too. It wasn't really a capacity crowd, maybe 300 at most, so we didn't have to worry about blocking anyone's view. Seeing as the fencing round the pitch looked as though it had been painted red and black at one point it wasn't too difficult who the home team were. I had been told who the opposition were but it wasn't until I got home and looked it up that I remembered.

As Nev pointed out it was a bit like watching a conference match, but then again a Lev a ticket isn't going to get you Premier League standard. At least 'our' side showed more invention about going forward and even made their goal keeper work a few times, which is more than can be said for the opposition. It was nice to see that throw ins were taken from where the ball went out of play, free kicks were taken from where the referee said, and the game was played with a very good level of sportsmanship. In the second half the ref did get a bit card happy, and at one point gave a yellow to a home player that he thought that he had booked before and so showed him a red. He must have realised his mistake as this player remained on the pitch for the rest of the game. It could have been the bloke in the stands helping him out, as every couple of minutes he was shouting something or other out, I wish that I could understand whatever it was that he was saying as it was making the lads in front of us laugh. With about twenty minutes to go the opposition were down to 10 men as one got sent off for his 2nd yellow card. He started walking off, got a few feet changed his mind and went back towards the referee. I thought that he was going to try and argue his case, but I was pleasantly surprised that all he wanted to do was shake the Ref's hand, he didn't even get any barracking from the home supporters when he trotted off.

The game petered out with the opposition defending their goal in numbers, and the home side throwing everything but the kitchen sink at the goal. The final whistle blew, and none of us were sure about the final score, it looked like 0-0 but as we had missed the first few minutes we couldn't be certain. A couple of the 'local nutters' decided to try having a go at the match officials as they went off, but as one of them couldn't even get over the wall (yes it was Mr Gobby) it fizzled out into nothing. 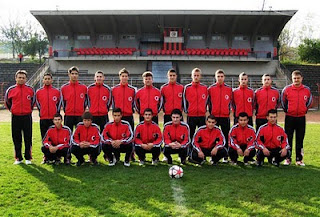 Once I got home I was able to confirm that the final score was indeed 0-0, and that the opposition was Balkan Belogradchik. All in all we enjoyed ourselves at the football match, and I for one am looking forward to the next home game, we do have family over then but I'm sure that Sarah will let Adam go.