Well yesterday was Bulgaria's Independence Day, so it is like a two day public holiday or even a four day weekend. Since Net has got involved with the coalition we get invited to some rather odd things, yesterday was no different as we were invited to Bulgarian wrestling in a village called Parvomaytsi. Unfortunately no one explained where in the village it was actually to be held, but at least I knew where the village was so that helped. I did have a vague idea about where the event was to be held, so we duly set off in that direction. My sense of direction served us well again, mind you the amount of cars parked and the Police directing traffic were a bit of a give-away. So we parked up and took a leisurely stroll back to the park in the late afternoon sunshine. 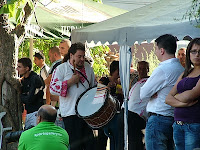 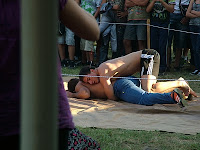 If we were expecting a bout between the likes of Big Daddy and Giant Haystacks we would be sadly disappointed, but in all honesty we didn't really know what to expect. As far as I could make out it seemed to be like the wrestling that you would see at the Olympics, but at a village level. There was no ring but a square of canvas laid out on the ground, and the winner seemed to be decided by pinning an opponents shoulders to the ground. This is all done to 'musical' accompaniment, well it seemed to involve a drum, an accordion, and a set of bagpipe things, although musical might be stretching the definition a wee bit. The crowd did seem to enjoy it all though, and a lot of the time it was difficult to actually see what was happening through the press of bodies. There were two weight categories below 80kgs, and above 80kgs, and the winner of each category won a sheep. I think that they were still alive, and maybe not destined for the Barbecue. 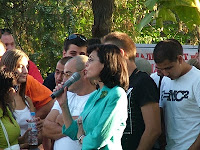 After the initial bouts, it was time for speeches, and they do like a good speech over here. One of the main speech makers was this woman in blue, she was a VIP and everywhere that she went she was shadowed by a security entourage and the local police. Had it been the UK the Chief Constable at least would have been there in his best uniform, but she got a couple of local scruffy policemen. I guess that it is a case of when in Rome. Incidentally I think that this woman is someone called Meglena Kuneva, who is the Independent Presidential candidate. As they were doing their walkabout and meeting the public Net and I decided that it would probably be a good time for us to make an exit, which suited me as I was starting to get a bit peckish. So it was into Gorna and time to feed the beast. Suitably fed and watered it was then into VT as we had been reliably informed that there would be the last Sound and Light show of the season, and that this would also include fireworks.

We were advised to get there early as with it being a special public holiday it was likely to be heaving. So we set off at what we thought would be early, got to the bottom of Arbanassi hill and crossed the bridge at the bottom to find that the Police had already closed the road off. So we then had to make a detour into uncharted territory for us, just by luck we were able to find somewhere to park quite easily, and it didn't take us long to make our way up to the main square. Where we were confronted by a mass of bodies and TV vans, not only was there to be a Sound and Light show but there was also a televised military parade going on. Where we were stood it was difficult for me to even see Tsaravets, so Net had absolutely no chance of seeing anything, even standing on a wall made little or no difference. We decided to have a wander round and see if we could find a better vantage point, hopefully one where we both could see what was happening.

We then found ourselves on the next road over but the slope went the other way, so now we could both see Tsaravets between a couple of TV wagons. We couldn't see what was happening with the military parade, which was of no consequence as we hadn't come to see that. Once the parade had finished and the dignitaries had disappeared it was time for the Sound and Light show to begin. The first thing that we were aware of was a team of squaddies behind us, loosing off full magazines of blanks through their assault rifles. On full automatic, they make a hell of a racket, and between eight of them they must have gone through five magazines each, my only thought was that "I'm glad that I don't have to clean those". I enjoyed the Light show, we couldn't really hear the sound above the noise of the TV generator lorries. Unfortunately other people noticed that we had a fair view and some did insist on standing directly in front of us. They weren't the worst ones, that award goes to the ones carrying children on their shoulders, so we ended up shuffling from side to side just so that we could see the show. All too soon it was all over and it was a case of trying to fight our way through the crowds to get back to the car, and then fight our way through the traffic to get out of VT. 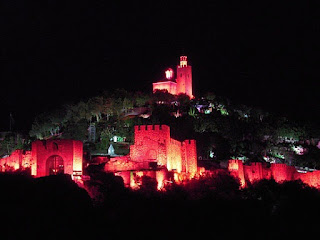 All in all, the sound and light show is well worth seeing, maybe next time that we go it will not be quite so manic. Mind you it has taken us very nearly three years to get to see it, I have just been working out that three years ago tomorrow we set out on our journey across Europe and to our new life here.