Just in case anyone was wondering if I had dropped off the face of the Earth, I am back with yet another Blog for your 'enjoyment'. We have been fairly busy just recently, especially since we had the first snow, this proved to be a timely reminder to start winterising the house, So wood has been cut, split and stacked, chimney flues have been swept and the garden has been tidied. We have also been giving Jolanta, our neighbour, a helping hand too.

It hasn't all been work though, family have been over, I've managed to go to 3 football matches, Net has been on a couple of Ladies days, we have had a meet up with some members of the group in Veliko Turnovo (including Bulgarians, so no-one can accuse us of the group being exclusive even though they have tried), and we have been out walking in the countryside.

A group of like minded souls have got together and formed a walker's group, and we are known as The Balkan Ramblers. Each week we meet up at a given point and go traipsing off into the Bulgarian wilderness. Normally there seems to be about a dozen of us, and the ages are quite varied. The object is to get out and about whilst the weather is good, it won't be much longer and the snows will be back and we will see enough of the same four walls then. It is a nice bit of exercise, and a good way of socialising too.

Our first walk took us all the way through Emen gorge, to the village of Emen and back again. We did stop in the village for a coffee at the halfway point, and luckily some of us took money with us. It was during this pit stop that we christened ourselves The Balkan Ramblers. The walk from the lake to the village wasn't too bad, some of us tried to walk the Eco-trail, but that seems to have fallen into disrepair so wisely decided to try not venturing out onto the bridges that criss cross the gorge. Our trip back from the village was a bit more adventurous, as we wanted to see the waterfall. The going underfoot was quite slippery in places, so some ended up going downhill on their backsides. 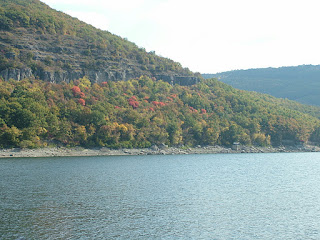 The next walk was along the waters edge at Stamboliski Dam. As we all had to travel there it was decided that we would meet up at a coffee shop in Pavlikeni. Once again the weather held out for us, and although it was a cooler start the sun soon came out as we started our excursion. We even passed a fellow who had caught the biggest Pike that I have ever seen, it must have been nearly three feet long. Despite it being a vicious fish it was still a beautiful specimin, just a shame that it was going to end up on someone's dinner table. 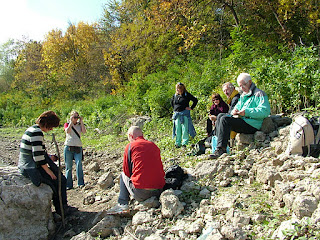 As it is a Dam Lake the going was sloped all of the way round, so it was a good workout for the ankles. We did have a few rocks, boulders and fallen trees to clamber over, but apart from that the going was flatish. The lesson had been learned from the previous week and we had all bought our own lunches. So it was quite pleasant just sitting at a convenient spot, feeding ourselves whilst listening to the waves gently lapping at the shore line and the fishermen in their boats puttering around. One good thing about carrying your own lunch is that once you have eaten it then you have less to carry. I have to admit that even though these walks are largely carried out off the cuff everyone does seem to enjoy them. 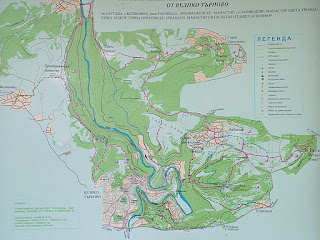 Our latest walk was meant to take us from VT to the Preobajenie Monastery, I have passed the signpost for there many a time but had never visited it. The happy ramblers met up in the Yantra Hotel for a pre walk coffee, and then set off through the old town of VT. I didn't realise that we were meant to have transformed into Mountain Goats the previous evening, as we kept on going up and up. The morning had started as slightly foggy, and the wood smoke mixed in did cause some people some difficulty, or it might have been a bit of altitude sickness. It certainly gave me a different view of VT that I have never seen before. There was a surprising amount of building work going on up there, and we also passed a clay pigeon range that I never knew existed. I remember seeing a signpost outside of the hotel that indicated that the Monastery was 6km away, but we were going uphill and down dale, across cliff tops and through woods. I think that I can safely say that everyone felt slightly tired after this walk. 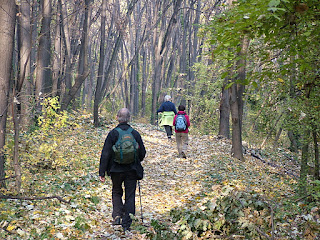 There is something quite satisfying about walking at this time of year, as we crunch through the autumn leaves that have fallen. It seems as though the snow that we had did cause some damage, as there were a few trees that had come down over the trail, but we were able to safely negotiate our way past them. A few more hills were crossed and we arrived onto a proper road, so we knew that our goal was within reach. Sure enough at the top of the road we found the Monastery. I'm glad that we went there as it looks to be under refurbishment, and it is good to see that some of the heritage and history are being preserved for future generations. 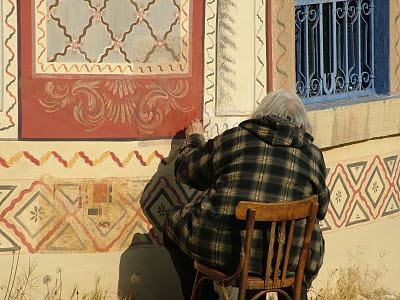