Well here we are mid way through September, the temperatures are still in the 30s during the day and no sign of rain. At least it is cooling down during the night so it is possible to get some sleep, and we are now under a sheet and a light throw. The window does have to stay open though, otherwise when the dogs sneak in during the night we would end up being gassed.

Just recently there has been rumblings and mutterings about the up coming local elections. Supposedly our Kmet has had enough and wants to quit 3 years into her 4 year term, but we haven't heard anything official. There is a trial going on in the Veliko Turnovo area whereby the local Expats can get involved in the elections and supposedly even run for election to the council. This idea was first put to Net when we met Bobby and Rosie from Trust Global radio and Cindy from Anglo Info on an evening out in Veliko Turnovo. Net was told that English representatives were wanted for VT, Gorna Oriahovitsa and Lyaskovets, and so Net volunteered for Gorna. It was then just a matter of waiting for someone to get in touch.

The next day the bell at the gate was rung, and there was someone that we vaguely knew from the next village. He wanted to know if I was interested in running for office, now not being at all political I thought that it would probably be better if he spoke to Net. It only turns out that he wanted to know if anyone would be willing to run for office, his party would provide the sponsorship and backing. Beyond that he couldn't really provide much information, nothing about policies or tendancies, but he said that he would organise a meeting with the party heads. So it was just left at that, or so we thought. On my next trip to the shop, it was mentioned that Christian had been in and had told them that Net was going to be running in the elections. Shame that he still hasn't got back to us though. 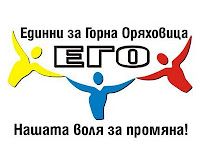 About a week later we had a message from Katia saying that a coalition party wanted to meet with Net, and could we meet on the Friday. Then on the Thursday Katia phoned again saying that it had been cancelled but that a CRB would be needed, but that she would get back to us when the meeting had been rescheduled. We couldn't really understand the bit about needing a CRB, they are only valid for 5 years and we have been here for the last 3. When Katia got back to us it turned out that the CRB thing was a mistake from the party legal team and that everything kept changing. The new meeting was scheduled for Tuesday and all would be explained then.

Tuesday arrived and we set off into Gorna, it was difficult to know what to wear as the day was still hot but we were not due to meet until 6 that evening. We decided on the smart but casual look, and thought that we would be able to keep out of the sun for most of the time. I was even allowed to have an ice cream, but only after I had promised not to throw it over myself as I was wearing white trousers. After a leisurely lunch it was time to do battle with Vivacom again, last month I was able to get out of a contract that I wasn't really in, but it did cost the individual whose contract it really was. Trying to think ahead then I asked for all of my bills to be put of one invoice and posted to me so I could pay it round at the Post Office. Well this month I got a bill for 77 Stotinki, no standing charge for the tariff that the house phone is on, no TV package and no mobile phone charges. So instead of making it easier for me they had completely messed it up, I was prepared for the normal battle that you get in these places and the shoulder shrugging. I was assured that the proper invoice had gone out on the same day as the 77 Stotinki one, but we have only ever had the one invoice from them so something had to be wrong. In the end it was me that spotted the problem, there was a completely different post code on the new invoice, so now it seems as though the village has 3 different codes that I know of. We shall see what happens next month, so this month's battle with Vivacom was more of a skirmish. 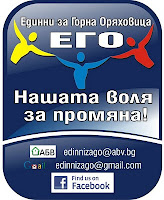 As 6 o'clock was approaching we waited for Katia in the square, but she was held up in VT so her husband Mitko came and found us and escorted us to the new party offices, which were being opened that evening. Net did have a few questions but they would have to wait until Katia got there, a young lad who spoke some English was tasked with making us feel welcome, many thanks Viktor. Sure enough Katia duly arrived, and began to make the introductions, not only was the main candidate for Gorna there but also the main party boss had come down all the way from Sofia. Net was introduced to them both and probably shocked them by being direct and asking why they wanted English in the party, and what would her role be. They basically wanted an English member to stand for election, but as the powers that be kept moving the goal posts time ran out. Not only that, as there would be 32 candidates vying for 5 places, the chances of a foreigner, with limited knowledge of the language, making it through was extremely unlikely. They envisage Net playing a link role as part of the civic council that they have set up, any foreigner that has an idea, or request, for improving the area can speak directly to Net who in turn can put it to the civic council. Now not everything may get actioned but it will not be for the want of not trying, and at least us foreigners now have a voice that will be heard. They were quite pleased when Net told them that she used to be involved with local politics when we lived in the UK, they deemed this ideal as they want new ideas and new ways of doing things. The language problem was raised by us, but we were assured that it wouldn't be a problem as there would always be a translator available at meetings. It does seem as though they have thought things through, and this is not just some knee jerk vote winning ploy. The coalition is broadly a centrist party so there is nothing too extreme or radical about them, and they all want what is best for the area not necessarily what might be best for the individual parties. Net then had to sign some declaration, and became a member of the coalition. Katia did say that I could have signed as well, but maybe one in the family is quite enough.

As I mentioned earlier the new coalition offices were officially being opened that evening, and this included a service by the local priest. As far as I could make out it was basically blessing the building, blessing the assembled guests and individually blessing the party candidates. Net got pushed forward for the last bit, so when we said all those years ago that we wanted to integrate into Bulgarian life I don't think that either of us really envisaged that we would go down the political route. Despite being the only foreigners there, they went to great lengths to make us feel welcome and included in the various proceedings. It was a very nice feeling, and there was never the undertone that they had to keep the foreigners happy. There are some fairly large projects in the area, maybe Net will come in handy with one, or more, of them only time will tell. Already we are getting invited to social functions, the next one being wrestling which might not be our cup of tea but definitely something new to experience. Net has also been invited to an art exhibition, and was also asked if she would like to display any of her work, which is much more Net's scene. It was pleasing the see that a lot of the youngsters take an active interest in the political goings on of their towns and cities, unlike the largely apathetic attitude of the UK. 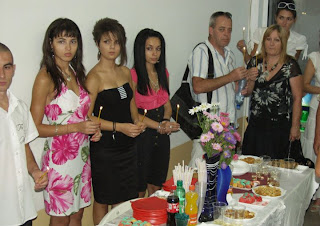 If anyone would like to join the coalition's facebook page, then please just follow the link below. It might be in Bulgarian but using Google translate gives you an idea about what they are all doing.
http://www.facebook.com/groups/135450959877454/
Posted by Unknown at 20:21