Anyone Can Be Cold 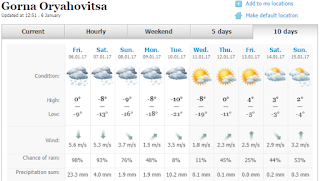 Welcome to the first blog of 2017, I hope that you have all had a good Christmas and New Year. As you can see from the image to the right things are going to cool down just a little, particularly overnight. It will all prove to be a good test of the changes we have made over the last year, so far things seem to be working but the mercury in the thermometers hasn't plummeted that drastically so far. We managed to get through Christmas with it being fairly mild, but things certainly look as though they are about to change. We shouldn't complain as the previous two winters have been unusually mild. Snow has been constantly falling since last night, and the trenches I dug this morning I have had to dig out again. 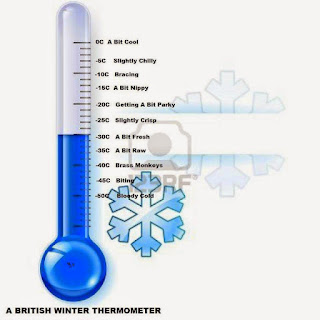 So what changes have we made here? We have tried to keep as much character to the house as possible, but we decided to finally do away with the old internal doors and windows. None of them really shut properly, even after I had planed them down. Planing them did give other problems, as various gaps appeared. Holding a hand up to these gaps a draught could be felt. So we took the decision to replace them all. The new doors and windows might not be in keeping with the character of the house, but they do now actually close, and none have to be held closed with hooks and eyes. When closed there are no longer any draughts, whistling through non-existent gaps. We have also put extra rolls of insulation up in the roof space. So in theory we should not end up trying to heat the village via our attic space, even though the roof now has a thick layer of snow to provide even more insulation up top. Down in the cellar we have a new wood burner. The old one worked fine but had a smaller door, so we were limited to the size of logs we could actually feed onto the fire. With this new one it has a massive door. Anyone who splits wood out here will be aware that there are often problems, some logs you end up nibbling bits off and that seems to be it, even if a splitting wedge is used. Now with the generously sized door I can even fit a stump from the black swamp inside, even with those awkward roots which always seem to grab hold of things. 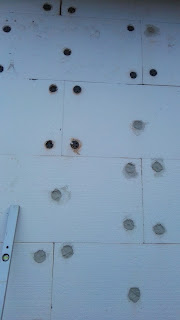 The main change that we have made has been the insulation on the outside of the house. We have also insulated some of the internal walls, then wallpapered over the top. I've seen other people do the same to the outside of their houses and it all looked quite simple. Don't be fooled, it isn't as easy as it looks. I didn't think that sticking insulation to the walls would be that difficult, so I was just going round sticking up sheet after sheet while trying to get things as level as possible. Gaps were carefully filled in, and I lost count of house many sheets of polystyrene I went through. I can safely say that I got fed up with the sight of those little white polystyrene balls, as initially I was cutting the sheets with a kitchen knife (but don't tell Net). It was then suggested that I might find a gas soldering iron easier to use. It did cut down on the amount of balls floating around the garden. I thought that I was doing so well that I carried on sticking sheet after sheet to the wall. Bulgarian weather had other ideas, and the sheets I had stuck up in bright sunshine the adhesive must have dried out too quickly. As one morning I spent chasing round the garden gathering up sheets of polystyrene which had blown off. I then had to work out which sheet went where, it was a bit like trying to do a jigsaw without the box lid. I have since found out that I should have used the plastic pegs as I went, but we live and learn. More by luck than judgement I didn't, as I would have put the meshing on incorrectly, as I would have used the central pins to hold the mesh in place. Fortunately we have a friend who knew what he was doing, and he did all of the meshing and plastering for me. Even the fiddly corner bits, and around the doors and windows. Thanks Dani. 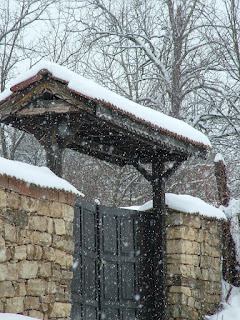 Things are going well so far, as we are now down to -8C and indoors is warm and cozy. So -8C outside, and indoors it is a comfortable 23C, so it would appear that our endeavours are already paying dividends. It might also have something to do with the fires being lit, a stomach full of beef stew and a pair of Granddad slippers on my feet. The dogs are sprawled out in front of the fire in the little lounge (even though they often smell like they have lived on a diet of Sprouts for the last month), two of the cats are sleeping on the furniture and the other one has laid claim to one of the dog beds. We might just survive this winter comfortably, without having to touch the extra firewood which we stocked up on. The freezers are still full as are the cupboards. We have plenty of dog and cat food, torches and candles are in convenient locations, and mobiles, laptops and kindles, not to mention the all important Internet dongles are all fully charged. I hope that you manage to stay warm and safe too. Before I forget, the blog figures for last year went past 200,000 hits, and that can only be down to all who have accessed the blog. Very many thanks to you all, especially to those who have shared the blog links with friends and family. People have been very complimentary about these blogs, but they are only ever as good as the people who read them. Stay warm, stay safe and please accept my wishes for a happy and healthy 2017 for you and your loved ones. Remember that Spring is just around the corner. 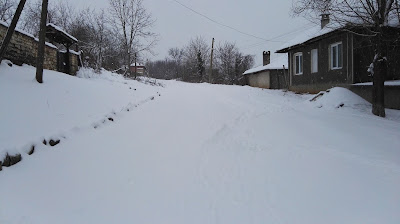 Email ThisBlogThis!Share to TwitterShare to FacebookShare to Pinterest
Labels: cold, Inside, Insulation, Outside, snow, Warmth, Winter