The Day Of The Races 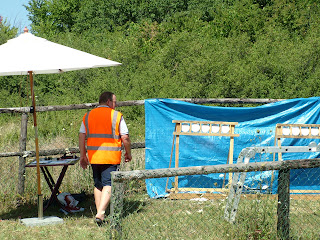 The Saturday dawned bright and clear, I know this because I was awake at daft o'clock still trying to figure out what had been forgotten. To no avail, but it did have at least one benefit. I was able to get in the bathroom first, not a bad result when you consider that I could have been at the back of the queue. Then it was time to play tea boy, once everyone had been sorted out we all headed off to the campsite, via a shop as Iskra's father wanted to get some water. When we got to the shop he decided that he didn't want any water after all, but we were still ahead of our mental schedule. 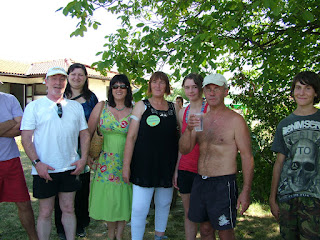 Once we had arrived at the campsite we had enough time for a quick coffee, before sorting out the team and the marshal packs. We also had to put the finishing touches to some of the games and adjust some of the others. For instance at the archery, the pins would not hold the balloons to the target boss so the game there had to be rejigged slightly. Fortunately the problems that were encountered on the day were fairly minor. At 9 in the morning it was meant to be time to brief the team captains and the marshals, eventually they were shepherded into place and the briefing were carried out and packs were issued. Of the twelve teams promised, eleven turned up to compete, the only ones who failed to show were Team Vinograd who had withdrawn the previous day. The mayor of Dragizhevo formally opened the games by saying a few words and cutting the ribbon. Once the speeches were over it was over to Bobby martin who introduced the teams and then they were away to their first events. The morning all went like clockwork with each team turning up to where they were meant to be, when they were meant to be there. 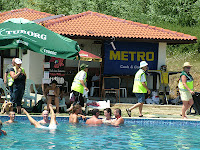 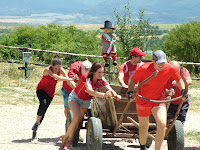 The sun continued to climb high in the sky, and the temperatures were rising all of the time, so the pool events were looking more and more inviting. The teams were staggered for their lunches, the theory being that this would help Nick and Nicky's kitchen staff. Hopefully it worked to a certain extent, but people did get fed and the teams managed to appear at their next events. After lunch a few problems cropped up, mainly caused by marshals just going home and not actually telling anyone, so the events in the afternoon were a bit more chaotic. This was also when the TV crews chose to turn up and start filming, and the newspapers wanted interviews. As the various photographs, that have been posted round the internet, show there were plenty of big daft grins plastered on people's faces. 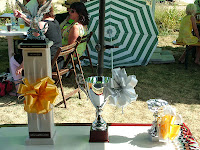 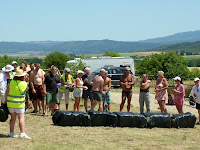 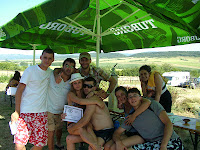 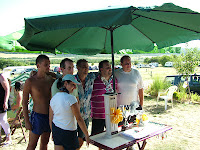 Come five o'clock it was all over, even if we hadn't managed anything else we had got ExPats and Bulgarians working and competing together, and from that point alone the games were an outstanding success. The feedback that was passed on immediately after the games was that they had been an incredible success. Some teams were more interested than others in the final placings, and there were three different trophies up for grabs, which would go to the top three teams. The trophies were kindly donated by Trust Global radio, McNamara's Irish Bar and the VT Times. It all seemed to work out quite well, it was a team of Bulgarian youngsters, from a local Salsa club who came first who came first. A mixed team of Bulgarians and ExPats came second, and an ExPat team who came third. Once the trophies had been given out it was time for the evenings festivities to commence. Along with the raffle there was also the karaoke. People will be glad to hear that I didn't sing, as I can't carry a tune, not even in a bucket. Everyone did seem to enjoy themselves, and I think that I crawled into bed at nearly 2 in the morning. I was also up before 6 tidying up the archery and slingshot ranges. Just in case anyone wonders what Net and I were doing on the day, Net was trying to take charge of the marshals, and myself? Well I was competing. The team that I was part of came third as we were called the VT Camp Crusaders the trophy that we won is now being kept out at the campsite, but I do get to keep my third place medal. 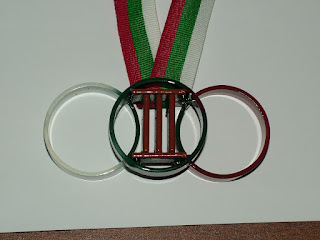 The Run Up to It's A Knockout 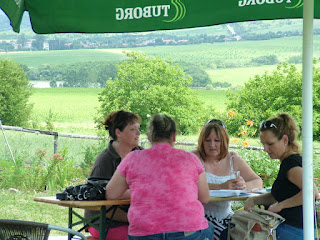 Maybe some of you have been keeping an eye on the calendar, and will be aware that the It's A Knockout was held at the VT camp site this weekend just gone. I have decided to blog it in two parts, the lead up to the event, and the event itself. I don't think that I have ever spoken to the press quite so much as I have in recent weeks. Not that I have been the only one, as can be seen here it also happened to Net and Nicky. Although as they say any publicity is better than no publicity. Besides speaking to the newspapers, I was also invited to chat with Bobby Martin on Trust Global Radio. As many have said previously it is lucky that I have a face for radio. The first time I was a little nervous, but managed to get through it all unscathed. Probably largely down to Bobby though. 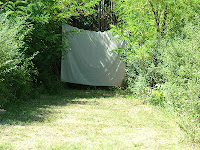 There have been several planning meetings throughout the year, and as time progressed more people have been invited to join. It does seem strange looking back on things that this all grew from a friendly quiz challenge with the Condor Club down near Nova Zagora. Not only have there been planning meetings but also some fund raisers, mainly because we were starting off with no equipment. Games also had to be devised, and built, alongside rules being drawn up. It was quite difficult trying to sort out the logistics of it all, we didn't know how many teams we could expect, and by the same token we did not really know just how many events we ought to consider. 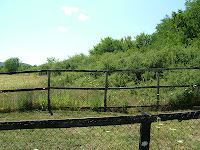 Nick and Nicky out at the campsite very kindly said that we could use there as the venue. So that was probably the biggest concern sorted out, to be quite honest I don't think that this project would have worked without their willingness. Although they are probably fed up with the sight of us. Tomorrow will seem rather strange when we go there for the craft club, and I am not wandering about trying to work out which game will go where. We had to come up with a shortlist of games, and also try to figure out where they ought to be held so that they didn't interfere with anything else. It was quite surprising where some of the ideas were coming from, but they were often adapted to fit into another part of a game. In the end we decided to go for 10 games, and each one would have to be tried out to make sure that they would work. 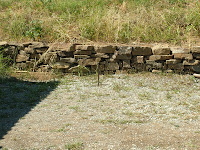 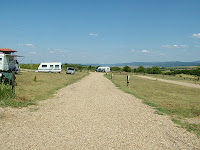 We decided that the time to test the games would be the weekend before the big day. This would give us enough time to change things around if necessary, and also to source any more equipment that might have been needed. It was also used to get various marshals used to the games themselves and to highlight any particular problems that might arise. It did prove very beneficial on several different counts, it highlighted the dangers of shooting, so that was ruled out quite quickly. This meant that we had to come up with something else to take its place, but luckily it was the only game that we had to remove. A couple of the others had to be slightly adjusted, but all in all a very worthwhile exercise. Just so there could be no arguments about teams having a sneak trial, a couple of teams of village children and some students were used. Once we found out what worked and what didn't we sat round a discussed how they could be changed or adapted. It did help having some new heads available to give things a fresh approach. 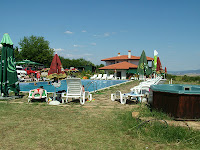 When everything had been decided upon, it was then just a case of deciding what was going to be taking place where, and also who would be doing so when. This might sound easier than it actually was, the location for the games themselves was quite simple once a basic plan had been drawn up. The difficult thing was trying to get 12 teams through all 10 games roughly on time. Eventually a timetable was roughly worked out. So everyone would know where they were meant to be and when, we began to make up packs of information. There were packs for teams, and slightly different ones for the marshals. 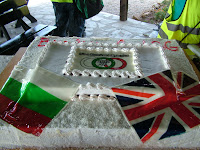 On the Friday evening as the teams began to arrive various bits and pieces of the games were being assembled. I don't know about anyone else but it had seemed to have gone smoothly, probably too smoothly for my liking. I kept on having the niggling thought at the back of my mind that we had either forgotten or overlooked something. With friends staying over we didn't get to sleep too early, and because I couldn't shake the niggling doubt from my mind I was awake the next morning at 4. It didn't do any good as I still couldn't work out what I might have forgotten, and by then it was too late really.