Then The Snows Came

Well we have now had snow out here in the wilds. Not a great deal, but enough to make getting about difficult. Normally the village tractors would have been out and about, with plough blades on the front, coughing and wheezing as they clear the roads. As we live up a small lane they haven't been to us yet, well they did when the snow first fell, as we have a two foot wall of snow at the bottom of the slope from our driveway gates. At the moment it seems like the village has gone into hibernation, nothing much is stirring anywhere, chickens are huddled up somewhere and the village dogs seem to have developed asthma when they bark.
Our dogs and cats have been out playing in the snow, Sirius normally ends up with a pile of snow on the end of his nose as he snuffles the ground. Albert and Razzy have been rolling and jumping in it like a pair of overgrown kittens. Mr Cat and Stinky don't do snow if they can possibly avoid it, and because Fenric is a Boxer and only has short hair he tends to feel the cold. Gremlin, our white cat, keeps coming home with black oily patches all over himself, maybe he has been doing oil changes on the tractors. Bonnie always lets us know when Grems is about, as she seems fascinated by him and barks and prances about whenever she catches sight of him.
To get out of the village at this time of year we go out past the cemetery, due to potholes we would normally avoid this stretch of road, but it is the shortest route out to get to a main road. It is also the flattest route with no ditches either side, so if we do do a Margot Fontaine we aren't going to come to too much harm, either to ourselves or the car.
Yesterday the weather was glorious, the sun was shining, the sky was blue and the snow a dazzling white. There was a constant drip, drip, drip from roofs and trees, and the temperature soared to 16C at one point. Looking at the weather forecast the weather was due to improve, and we could say goodbye to the sub zero temperatures. As I found out this morning the respite was short lived, last night's temperatures dropped (I did notice -8C at one point, and have been told it went to -14C). All of yesterday's thaw has now turned to ice, and the 'main road' through the village has become a skating rink. I was hoping that like the other year the tops of the trees would be encased in ice, when the sun hit them it looked as though they were made from glass.
Luckily during yesterday's thaw Mum and Dad managed to escape the village, as Mum had to have a small operation today. It might be one thing to get out of the village, but we also have to take into account will we be able to get back. We do have winter tyres on the car and have reduced the pressure in them, thanks for the tip Kristin. The next thing on our must do list is renew the car insurance as that is due this week. Hopefully the slow thaw will continue for long enough to enable us to do it later in the week, failing that it will be a trip on the bus, which is an adventure in itself.
Well the log baskets are full, and the fires are banked in so it is now time to go and feed the menagerie while I can still see what I am doing. Then up to Mum and Dad's to feed their cats. I could always use my head torch, but do I really want to slip and slide through the village like some demented Dalek?
I was going to take some photos and post them on here, but sod's law the batteries in the camera were flat. I must remember what they always tried to drum into us in the Navy, 'Prior planning prevents piss poor performance'. Oh well, at least they are on charge ready for when we get the proper snow in the New Year.
Posted by Unknown at 16:50 No comments: Links to this post

Our First Attempt At Blogging

We are now into our third year here in Bulgaria, and I had a sudden urge to jump on the blog bandwagon. Initially I was going to wait for broadband in the village, but it seems to be getting put further and further back. To some this might seem like just another blog written by Brits out in Bulgaria, but to family and friends this will allow them to catch up with us and see what we are doing. Any pictures that we put up will normally be from ones that we have taken ourselves.
Who Are We?
Well some of you will know who I am, whereas others will know me by my alter ego Chris P Bacon, and I am 49 and retired from the Royal Navy. My better half is Net, an ex Nurse, among other things, which comes in handy. We are out here with 3 dogs Fenric, Sirius and Bonnie, and 5 cats, Mr Cat, Stinky Tinks, Gremlin, Razzy and Albert. 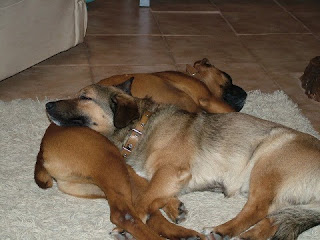 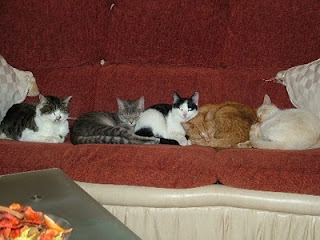 We did think about keeping Chickens and Ducks, but more about that at a later date. We do grow our own fruit and veg though, not that we are Tom and Barbara Good from The Good Life. Remember them, or am I just showing my age?
Why Are We Here?
We moved out here for several reasons, the main one being Net's love of painting and the onset of arthritis. This is such a picturesque country, and with the four distinct seasons has such a changing landscape just crying out to be painted. We did look at other countries, but I am glad that we made this choice. The people are so friendly and helpful, but beware of any claiming to be a maestro. It is a much slower pace of life here, and took us a good six months to get used to it. The air is clear, and the village relatively trouble free, and there are definitely more pluses than minuses to living out here.
Where Are We? 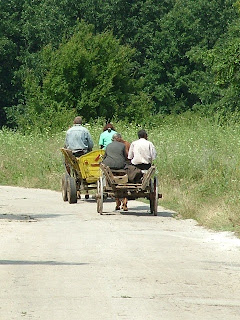 Well if you look at a map, there is a good chance that you will not be able to find us. We are in North Central Bulgaria, in a small village called Paisii (паисий), in the Veliko Turnovo region. There are only about 150 people living in the village, of which 6 are English, 2 Icelandic, 1 Irish and 1 Pole. Luckily Peter and Sylvia have taken us under their wing and shown us where to get things and how to get things done, (thanks Mum and Dad). It is a friendly village, and everyone seems to know everyone else. There is a definite sense of community spirit here, unlike in the UK where you might see your neighbours, but how many do you actually talk too. As previously mentioned it is a small village, just the one shop/bar, a post office (open twice a week) and a pensioner's club (we might live on a pension but have only used the club on village occasions). It is so quiet here, but a pleasure to hear birds singing most of the year, we hear plenty of chickens, the occasional dog barking and the odd tractor. It does take some getting used to all of this peace and quiet. We were extremely lucky to find the estate agents that we did, thanks to them we now live in our little bit of heaven.
We are slowly coming to grasps with the language, but we seem to be able to make ourselves understood with a mixture of Bulgarian and the odd bit of sign language. At this time of year, with the snow on the ground, it is an ideal time to get the various language books and CDs out. We have to remember that if you don't use it you lose it. I can now go to either the Post office or the local shop and not speak a word of English. It is only polite to try and learn the language, and we do enjoy a challenge.
What do we miss about the UK?
Mainly family and friends, though that is not to say that we haven't made some wonderful friends out here. It took a while to find a radio station that plays some listenable music, I'm not sure that I will ever appreciate the local 'folky' stuff that everyone seems hell bent on playing. Luckily we do not have any close neighbours, so I can play my music as loud as I like. We have been told that music in the garden is a good deterrent to snakes, not that there is any likelihood of there being any out and about at the moment. Not unless they are fur lined and with hot water bottles strapped to themselves. We came over with plenty of books, and other bits and pieces to keep ourselves amused and out of mischief.
It helps having an ex-pat community over here with various forums on-line. They can be a wealth of information, but in typical Brit fashion have a tendency to let 'the lunatics take over the asylum'. Since being here we have tried to integrate into the village life style, and not enter into the ex-pat Brits on the piss mentality. Luckily neither of us really drink, and with the garden, the house and the pets there is always something that needs doing. We try to help others, even if it might only be showing them where things are, or how to get things done. At the end of the day we are all guests in a foreign country, and need to help each other.
Do we regret moving here?
Not for one minute, our family and friends come out to see us, and it is quality time spent with them. We share with them the things and places that we have either been shown or have discovered.

Well that is probably enough for now, so we will see how this blog goes down, many thanks for taking your time to read it.
Posted by Unknown at 19:19 9 comments: Links to this post