Hello you 'lucky' people, I'm back, did you miss me? It only seems like yesterday that I was doing my previous blog, anyway two blogs in as many days must be great news for any insomniacs out there. I just thought that I would keep you all abreast of the social goings on out here before I forget what happened when, and who was there.

It started off on Friday evening, when Bobby Martin (and his lovely wife Rosie), from TrustGlobal Radio was staying at the Yantra Hotel, along with Cindy Preyzner from AngloInfo. Expats from the VT area were invited along to go and meet them. It is nice to finally be able to put an actual face to a name. Suzie from a neighbouring village wanted to go as well, but David her husband was tired after a busy week, so we said that we would pick her up. As Suzie said it did make a difference having a Friday night out in VT instead of staying at home and either reading, watching the box or going on the internet. Anyway, we arrived in VT and parked up and sauntered along to the Yantra, as we passed the window we could see that Bobby, Rosie and Cindy were already there along with Janice Myer from Dog tired boarding kennels. Normally I do feel slightly intimidated meeting people for the first time, but we were soon put at our ease. Tony Jackson was also meant to join us but when he asked at the reception desk they made out that they didn't know what he was talking about, but we did meet Rachel and Joe Pritchard. Now there is an amazing couple, they have been everywhere, home schooling their children as they went. It was an entertaining evening with Bobby telling us about his early radio days, with Radio Caroline and then Radio One where he used to help with putting the early road shows together. He was also telling me about his Naval days so we were able to swap some sea stories. At 9 o'clock the hotel bar shut, but not before a young lady had turned up at the bar wearing not a great deal. Now whether she was going to a party or if she was one of the 'traffic census ladies' we may never know. Once the bar closed it was just a matter of sauntering down the road to another bar and carrying on with our conversations. It all worked out quite well as I think that we all got a chance to talk with everyone else. After dropping Suzie off home it was definitely gone one in the morning by the time we got indoors and sorted the animals out. 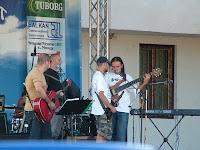 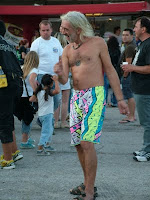 Saturday evening we went to the Mindya Rock Fest, it is an annual event but would be the first time that we had ever attended in our three years here, and it is not that far away from us either. Not knowing the traffic situation we set out a lot earlier than we actually needed to and arrived in Mindya in plenty of time. We were able to hear them going through their sound checks, and even that was enough for some, who had probably been to one too many Glastonbury's. Still why not, he was enjoying himself and wasn't doing anyone any harm. It was a very enjoyable evening, apart from Net's semi cooked/raw chicken, and we met a lot of fellow Expats there, some for the first time. We have said that we enjoyed it so much that next year we are going to go to both days. I can't imagine something like this happening in the UK, it was free, there was alcohol available and I didn't see any trouble at all, a credit to the event organisers, the festival goers, and the very low key policing. 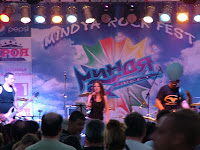 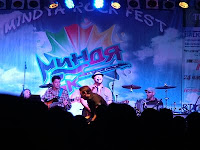 So once again we had another late night, consequently we were not exactly up with the larks on Sunday morning. We slowly surfaced and after a couple of coffees started to do the housework, Net was down in the bedroom and opened the windows and could hear something at the gate. When we opened the gate there was this little black puppy sat there crying. I don't think that it had even been fully weaned. So now instead of just the two dogs we have another addition. As far as we can tell she is a little girl, and has been named Mindya, so far she has been bathed, de-fleaed and has had a course of worming treatment. Net definitely seems taken with her, but I think that it is a mutual thing. At first we were a bit concerned that she would grow up into a big dog but having spoken to people the general consensus seems to be that she will just be a normal size dog. On Tuesday we took her with us in the car, when we went to Pliska to meet Lorraine and Big Dave. While we were there we also met Katie and JD so it has been a very enjoyable few days out. Even as I write this Net is planning this weekend's Barbecue, so I will let you know how that goes in due course.
Posted by Unknown at 15:45