A Busy Start To March 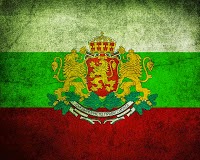 Early March is always a busy time here in Bulgaria, and it began yesterday. Many people have asked what all the fuss is about with Baba Marta, so I have decided to put my previous March blog bits into this new post to save people trawling through older posts in the archive. So even though the 1st was yesterday, some people still aren't aware about what it all signifies. Then there is also Liberation Day, which is celebrated tomorrow the 3rd. That is then closely followed on the 8th by Ladies Day. We also have our wedding anniversary to look forward to, and yes I do remember the date and how many years. I also remember what day we met and where, so the long term memory hasn't gone just yet. We also have various birthdays within the family, so it's all go here. So firstly let's have a look at one of my favourite celebrations, Baba Marta. 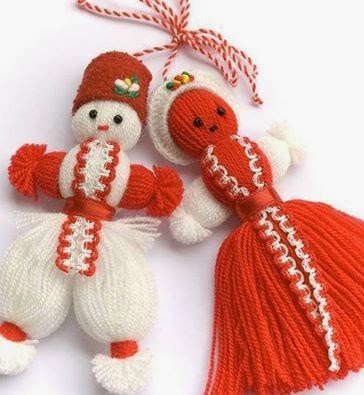 It is the celebration to welcome the coming of Spring and the waning of Winter. It is depicted by a cranky old lady called Baba Marta, or Grandmother Marta. Marta is a play on words for March, the month being called Mart in Bulgarian. Weather wise we find that it is quite similar to April in the UK, one day it can be brilliant sunshine and the next you can be confronted by all sorts of weather. I seem to remember something being said about in like a Lion and out like a Lamb. So the weather can be as contrary as an old lady, one day she can be all sweetness and light, but the next it could be like she has been on a diet of vinegar and lemons. Definitely not an old lady to mess with, and one who will keep you on your toes. So far she has been smiling, so the sun has been out today. It is so much nicer to hear the birds singing in the trees, rather than coughing and sneezing. There have even been a few bees lazily droning by, hunting for the crocuses and snowdrops which are now out in the garden. The daffodils and tulips are also pushing their way up through the soil, hopefully they won't come up blind this year or that we have some late frosts. 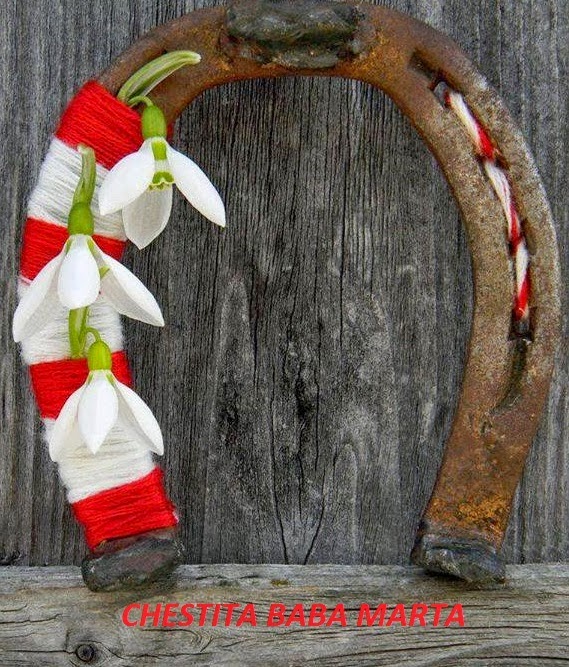 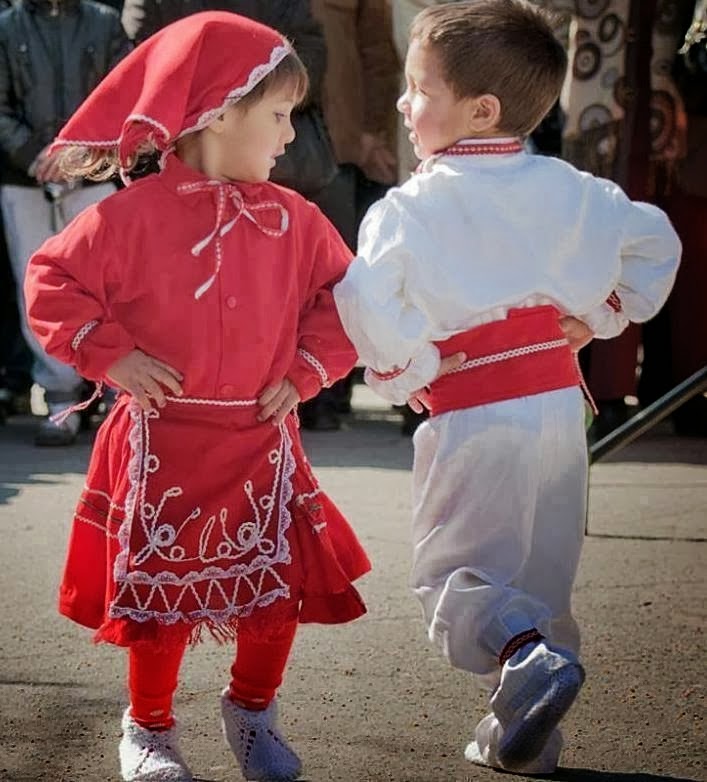 On the 1st March Bulgarians exchange Martenitsi, and wish each other Chestita Baba Marta! The custom is to essentially wish each other good health, luck and happiness. When Baba Marta is smiling the sun shines and the weather is warm, but when cross, or her bunions are playing her up, the cold stays longer and it may even snow.
These Martenitsi are the red and white ornaments, made from twisted threads and are often worn around the wrist or neck, pinned to the left side of clothing, especially coats and jackets. You can even see them decorating house doors and hanging in vehicles, some people even buy them for their pets to wear. At this time of year there are many stalls selling these Martenitsi, but there are still those who prefer to do things the traditional way and will hand make them for their friends and family. The colours are quite significant, with white symbolising strength, purity and happiness, and the red with health, blood and fertility. As shown in this picture Snowdrops are quite often incorporated as they are often the first things flowering after winter. 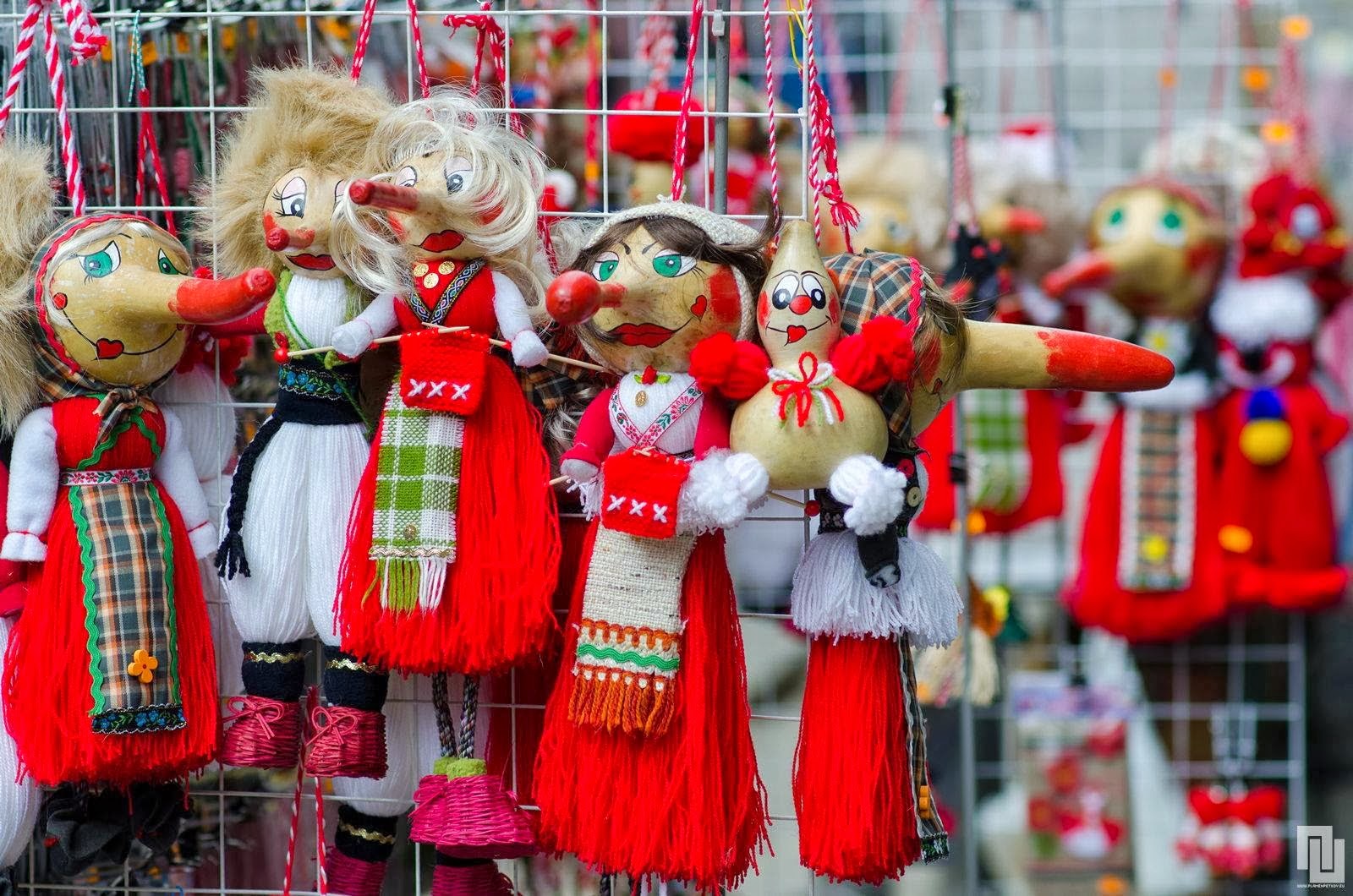 Quite often you will notice that a couple of figures are represented, and these are known as Pizho and Penda. Pizho is the male figure, and can be identified by being mainly white. As you might have deduced the mainly red figure is the female of the two, and is called Penda. Maybe it is a Bulgarian version of Yin and Yang, with all things being balanced out.There are different schools of thinking, firstly there are those who feel that a Martenitsa can be thought of as an amulet and is used for protection against Baba Marta, whose mercurial temperament can cause unexpected misfortune. Baba Marta is thought to be gentler and more forgiving towards the person who is wearing a Martenitsa. Some feel that a Martenitsa can also be used for fortune telling or to encourage the desirable outcome of a wish. Some also believe that wearing a Martenitsa will also hasten the coming of Spring. I have to admit to being guilty to smiling when I see the Martenitsa stalls set up, it gives me a little lift thinking that soon the warmer weather will be back with us. Even though the daytime temperatures look to be holding quite steady, the night time temperatures are set to remain above zero. Now that we are wearing our Martenitsi I have already started my annual version of Stork watch, the good news for us is that last year a pair of young Storks built a nest in the village. 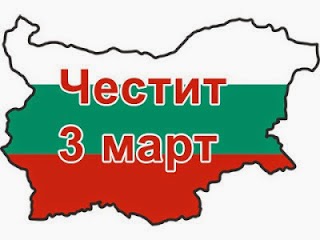 Tomorrow sees a very important day in the Bulgarian calendar, so all shops are closed as it is a public holiday. This year marks 137 years of Bulgaria's Liberation from under the Ottoman yoke, where they had been held for five centuries. The actual Independence Day is celebrated later in the year in September. So tomorrow commemorates the signing of the San Stefano peace treaty in 1878 between the Empires of Russia and Turkey, which enabled the Bulgarian nation to re-emerge, although that wasn't the final version of the peace treaty.

This peace treaty came at the end of the war of Liberation which was fought between 1877 and 1878. The Russians became involved due to atrocities that the Ottomans had carried out against the Bulgarians in the April uprising of 1876. Fortunately it was reported by an American journalist who was working for the British press. 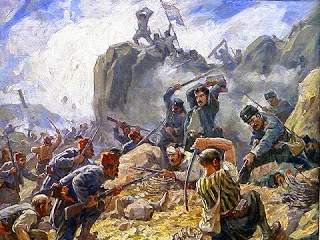 There are many famous names linked to the Independence movement of the 1870s, some are even known to us foreigners, some of who I have mentioned in previous blog posts. People such as Hristo Botev, Georgi Rakovski, Lyuben Karavelov and Vassil Levski were leading figures in the Independence movement but the deciding factor in ousting the Turks was the Russian involvement. This was when Tsar Alexander II of Russia declared war against the Ottoman Empire, over concerns about treatment of orthodox christians in Bulgaria. After the liberation Bulgaria came under Russian administration for a couple of years, but it also allowed Bulgaria a gradual transition to achieving nationhood once again. 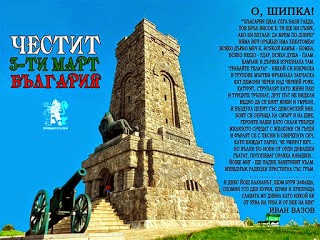 Tomorrow there will be celebrations held throughout the country. There are normally large solemn celebrations held at the memorial atop the Shipka Pass, which was where fierce fighting took place during the war. This is of such significance that various politicians, and heads of the military, are often in attendance. Flowers and notes of thanks are often placed at the various liberation memorials on this day. The parades are quite sombre occasions, but once the wreaths have been laid it is time to celebrate, and the Bulgarians don't need much of an excuse to enjoy a party. Don't be at all surprised if fireworks light up the night sky tomorrow evening, hopefully Baba Marta will keep her happy head on, and the weather will be good.

Ladies day is hopefully quite self explanatory, and if you are in one of the villages it is quite possible that the village ladies will come calling. That is next weekend so no need to panic just yet.