Logging On For Winter 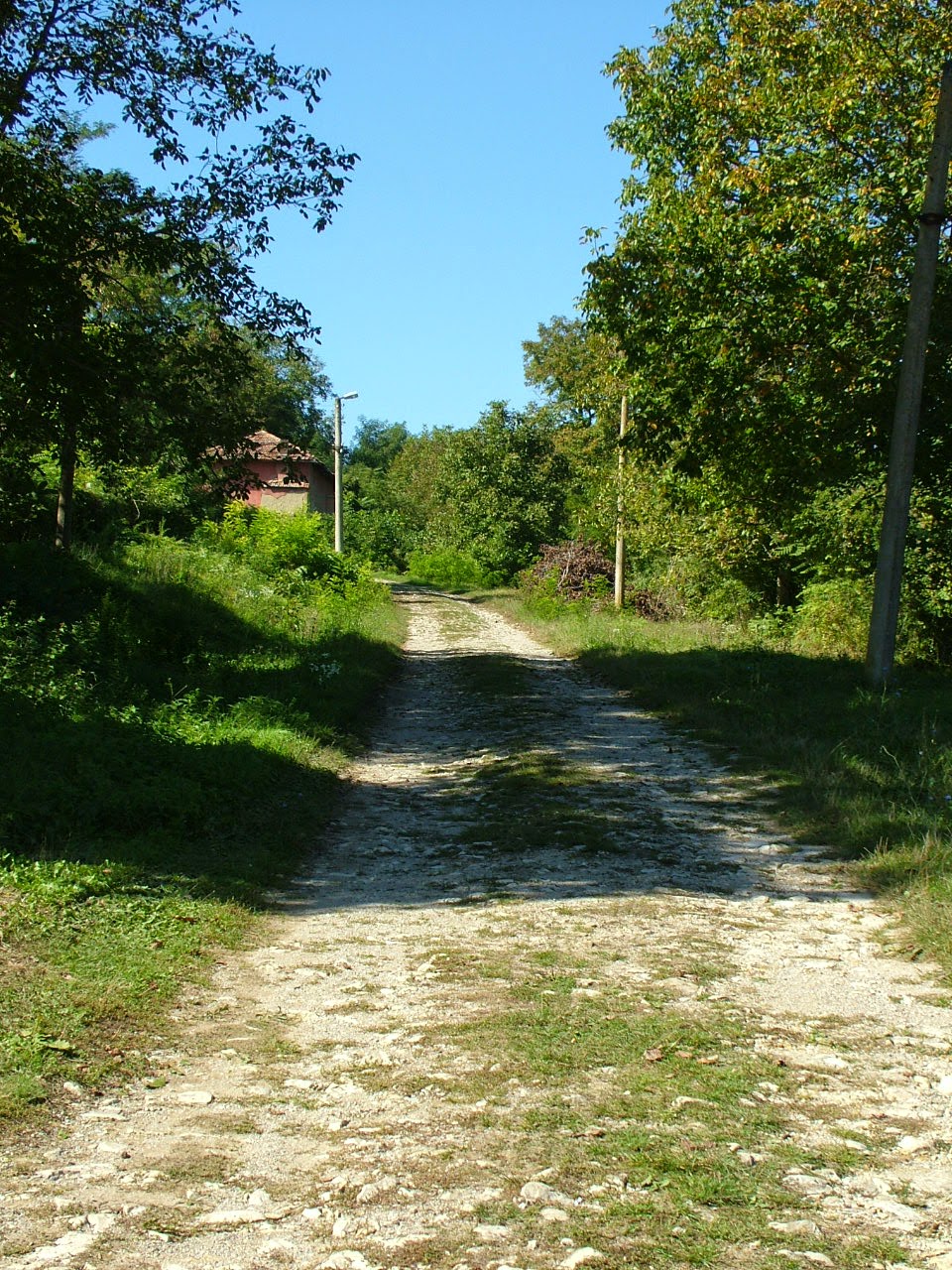 So September is drawing to a close, the nights are getting longer and the days are getting shorter. The temperatures during the night plummet from where they sit during the day, but at least it has stopped raining for the time being. So all in all it is much the same as when we first arrived here, six years ago. Now we have been here for six years and two days, and I am still more at home here than I ever was in the UK. At this time of year thoughts start to focus on the up coming winter, and what preparations need to be made. Some might think that we are a little bit premature in our thinking, but we are not the only ones. In the village the walnut trees are being raided, any fruit and vegetables that the ladies in the village can lay their hands on are being compoted and stored away in jars ready for winter. We would compot too, and one day we will learn how, but in the mean time our fruit and vegetables from the garden are going into one of the freezers. Living in a small village does get you used to adopting a siege mentality, and everyone is like a proverbial squirrel stashing food away for the winter while we still can. 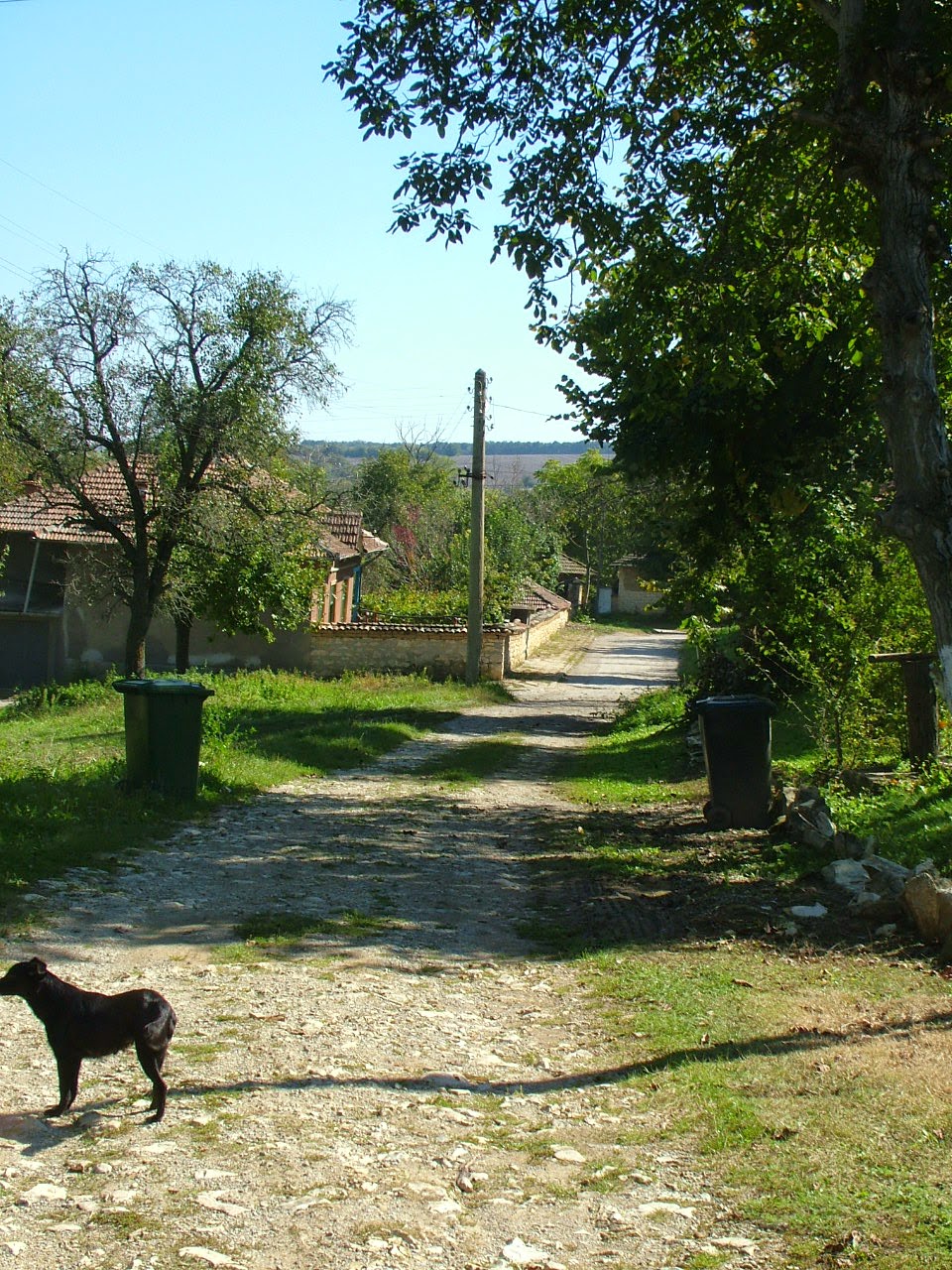 Even the people responsible for the power lines have been busy in the village. Each year they go round in their truck with the cherry picker on the back and cut down tree branches from around the power lines. Each year they seem to forget us, so we sit here reading while they have turned the power off and we don't get the benefit. So the following day risking life and limb I have had to get the ladders out and sort out the offending branches of the walnut tree out the front of our house. I wouldn't mind so much but I could actually see where branches were pushing against the cables. So if we were to get more strong winds we might well have ended up with a broken power line. Also with the weight of snow on branches above the cables there is another possibility of damage being caused that way. So defying death and nose bleeds I am perched at the top of the ladder 'trimming' the offending branches out of the tree. maybe scalping one side of the tree might be more accurate, but I am hoping that it will do for next year as well. 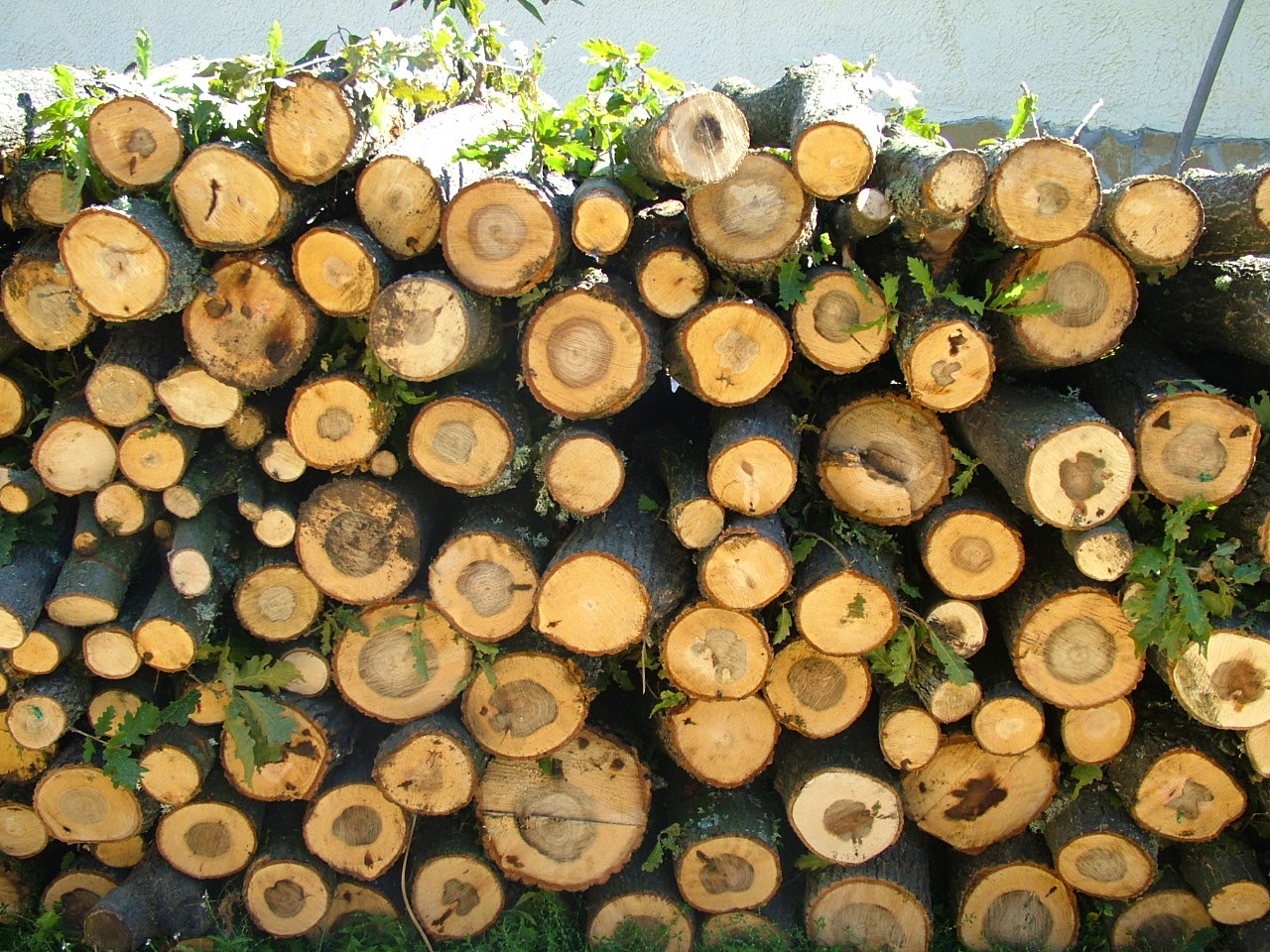 The next thing on our list of things to do was to sort out firewood. Now seeing as how we have wooded areas all round us, and the wood lorries are constantly shuttling backwards and forwards, I didn't foresee there being any problems. After all there has been no problems in previous years. So yesterday I went round to the mayor's office to arrange a delivery. I spoke with the mayor's secretary and explained what I wanted, and one of the village women started saying about documents. So there is me a bit baffled, wondering what on earth this document is. So the woman goes off and gets her document. So I have now seen a document, now I wanted to know do I need a document and if so where do I get one from. Maybe it was a new thing that I was unaware of, so I had the mayor's secretary talking about something in one ear and this other woman talking about something else in the other ear. Their voices were going up and up as they tried to make themselves heard over the other, and I'm stuck between the two getting more and more confused. All I wanted was to arrange a delivery of some firewood, why was that so difficult? 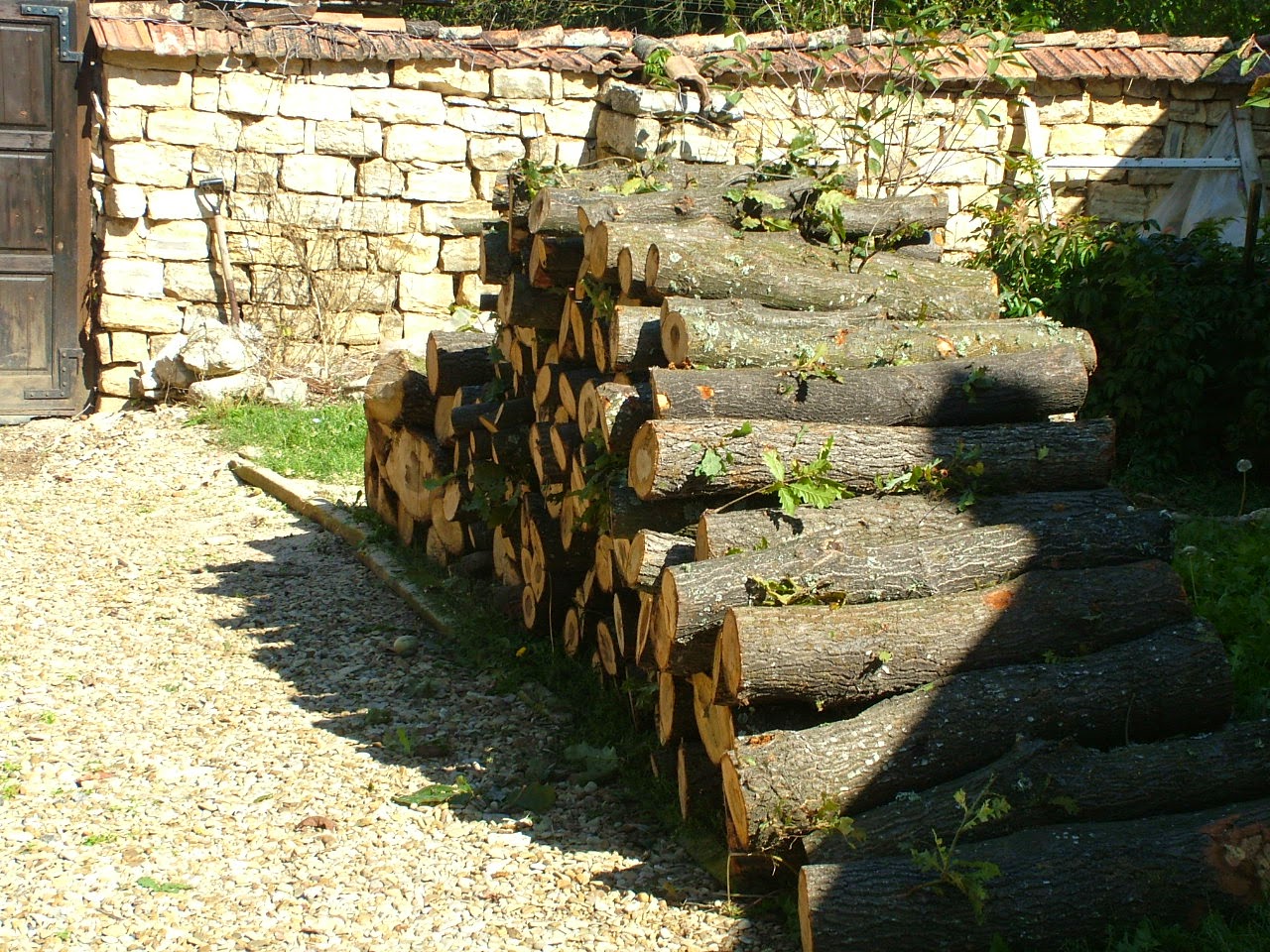 Knowing that the secretary's son lives opposite to us, and his wife speaks some English I thought that it might be easier if Emi got involved. At least that way I might actually get wood organised this side of Christmas. So after locking the mayor's office up we wandered down to Emi and Said's house. After shouting and hollering over fences and walls, and rattling the gate they decided that Emi wasn't there. Looking at the time she might be at the pensioner's club waiting for the school bus. So the secretary returned to the mayor's office and that left just two of us to head for the club. Thankfully not only was  Emi there, but also Petya. Eventually it turned out that the document the woman was ranting on about is for those who claim some form of social benefit, so why on earth she thought I ought to have one is beyond me. Maybe she wanted to sell me her document. For the life of me I couldn't understand why if a document was actually needed, how come none of the foreigners in the village were made aware of the fact. Anyway Petya and Emi explained that in the morning I was to go and see the mayor and order the wood. Much the same as I had done in previous years, and pretty much what I thought that I had done until the 'woman' began mentioning documents. 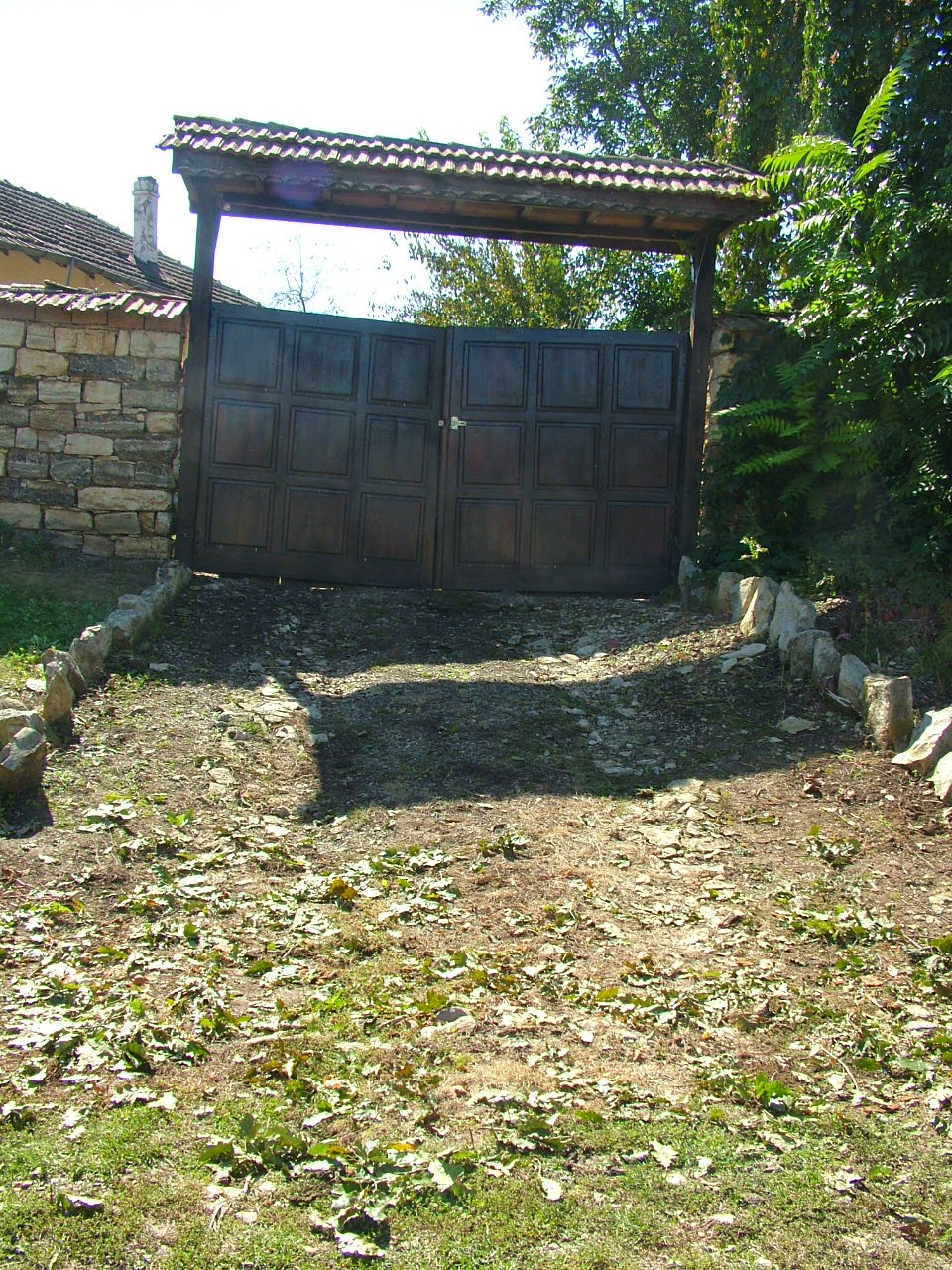 So this morning I return to the mayor's office and actually speak with the mayor. I explained what I wanted, and checked on the price. The price was the only thing that tallied between yesterday and today. The mayor, bless her was straight on to one of her many mobile phones sorting it all out for me, explaining where I lived, how much I wanted and what price she had quoted. My next question was when would it be delivered, today or tomorrow? The answer was about 10 minutes. So thanking the Mayor I returned home, and opened up the drive way gates to await the delivery. I had managed to do some of my daily 'poo-patrol', when a tractor and trailer full of logs turned up driven by Ivan. The first thing he did was shake my hand before speaking on his mobile, the gist of it being that he knew who I was, he has known me for more than five years and if he had been told who the wood was for he would have known where to bring it anyway. Once I had handed over the cash the wood was emptied into the driveway, and Ivan was off making more deliveries round the village. 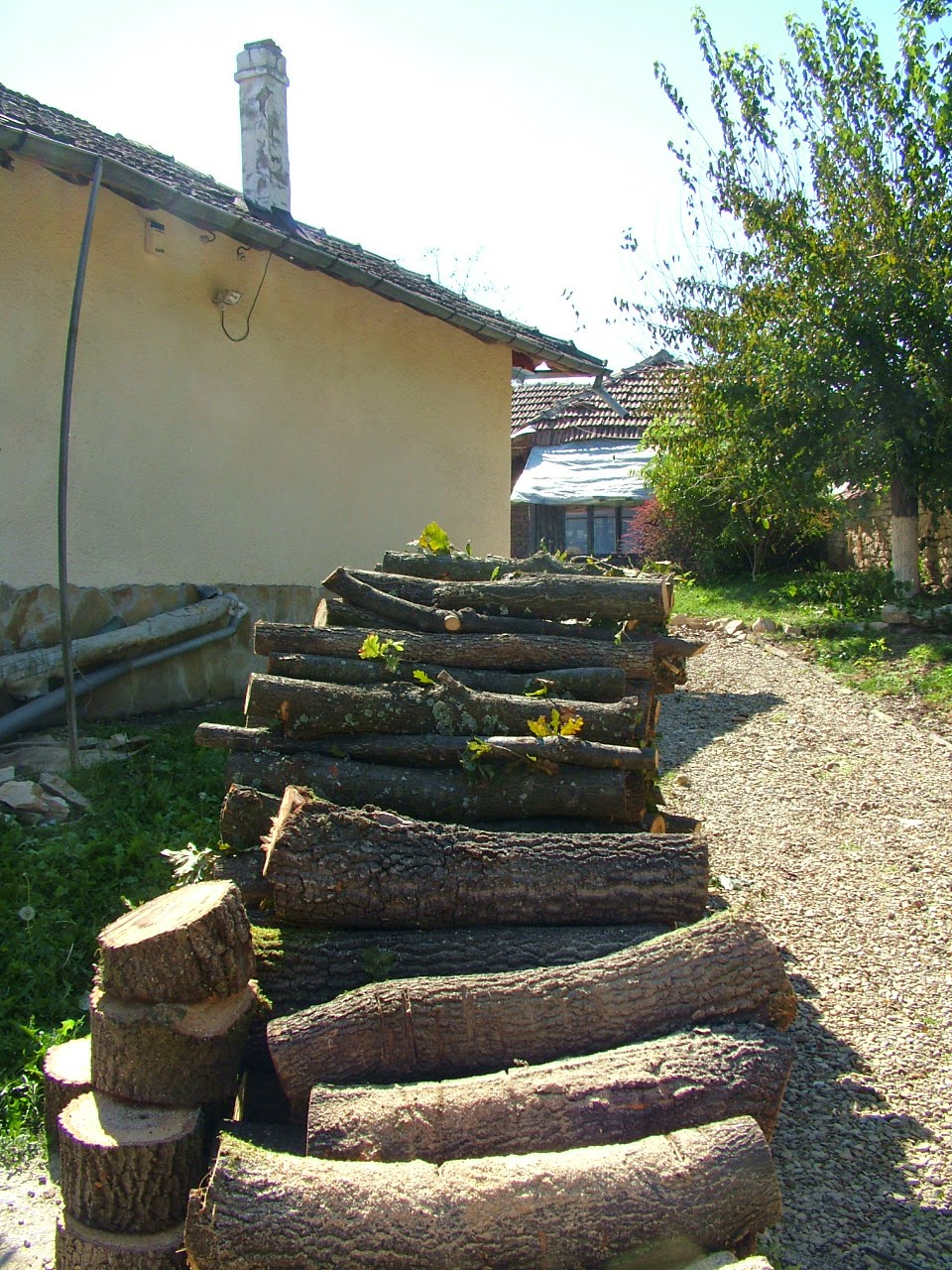 The price of wood seems to have gone down this year, or maybe we are slightly earlier ordering it. Last year it was 55 Leva a cubic metre and this year it was 50. This wood is still quite fresh, and as you can see the leaves are still green. This will all be cut into cheeses and go up under the barn to dry out ready for next year. Previously I have left it in metre lengths to dry out, but the chainsaw seems to prefer cutting the logs at this stage rather than when they are drier. Also some of the bigger logs are a lot easier to move in cheeses in a wheel barrow, rather than trying to wrestle with the full metre length. Our neighbour Said once again came and gave me a hand moving the logs up the drive and stacking them out of the way. It certainly makes things a lot easier for me, and he didn't want paying for his help either, I did insist that he had money for a packet of cigarettes though. Many people will leave their logs stacked outside their houses, and I am often surprised that no one ever goes and helps themself. Fortunately we don't have anywhere flat enough, where we can leave a pile of logs maturing, so we stack and dry our logs up under the barn where the dogs and the cats can keep their eyes on them. 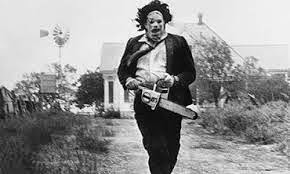 I am guessing that like most people, when I was living in the UK, I never had any reason to use a chainsaw. So once we moved out here it was a new skill which I had to learn. Most of what I learnt is through watching the locals, and learning what not to do. One thing you do learn by living in a village is how to look after your chainsaw. This is now my 4th one, surprisingly the electric version outlasted the other two petrol ones. I have been told that the fuel is quite bad here, and when you mix the 2 stroke oil in you do it into 4 litres of fuel and not the recommended 5 litres. This helps to prevent the piston overheating. 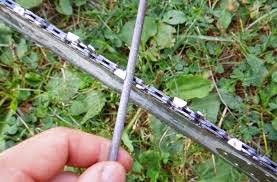 Every so often you will need to sharpen the teeth on the saw, and most people do this with a round file. There are various files that you can buy, but the cheapest ones might just as well be made of cheese for all of the time that they will last. It is a lot more sensible to buy your files from either your local Stihl or Husqvarna shops, they might cost a bit more but at least they will do the job. An even better option is to have a couple of spare chains, which can be swapped over is you are doing a lot of cutting. They do say that googles, gloves and hearing protection should be worn, and that safety flip-flops are not ideal footwear. Most things are common sense, but if in doubt get someone who is used to working with a chainsaw in to do whatever needs doing. If it is some of the village lads it is probably best not to watch.