A Slight Cock-Up On The Weather Front 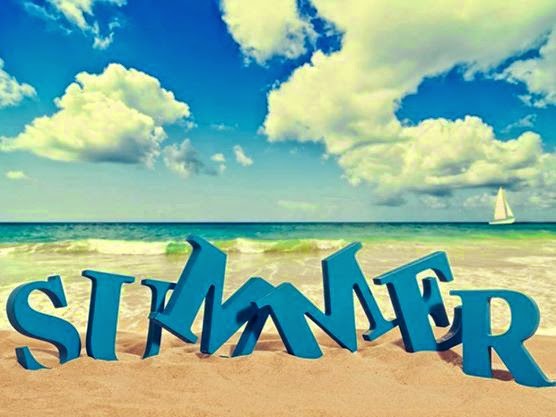 You could be excused for thinking that July is a Summer month. In the course of normal events it is, however this year there seems to have been a bit of a cock up on the weather front. Normally you would be thinking about lazy days on the beach, perhaps looking forward to your feet cooling in a stream as it slowly meanders past, or maybe even barbecues and picnics. So far this summer has been notable for just one thing, and that has been the weather. There just seems to have been so much of it, and unfortunately not the type of weather that you would normally associate with the Summer. 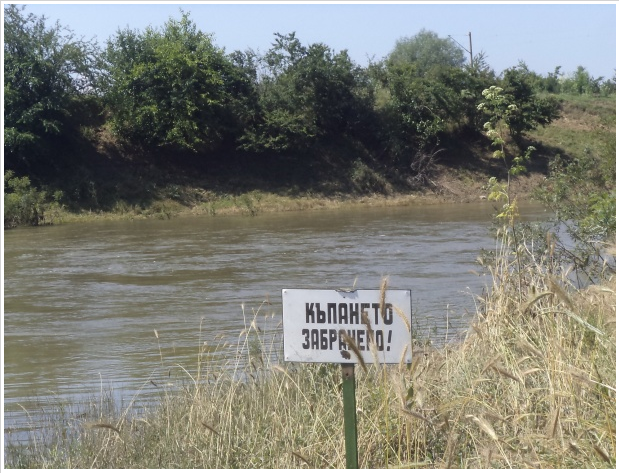 There have also been baking hot days to contend with, and in many areas, ours included, they have warned people not to swim in the lakes and reservoirs. Some of these have been filling rather rapidly through both springs and heavy rainfall, and every so often they have been opening sluice gates to prevent these dam lakes bursting their banks. Unfortunately sometimes this has created further problems downstream. The main problem seems to have been caused by the mild winter and the seemingly endless rainfall. The ground in many areas is still saturated and can not absorb any more water. 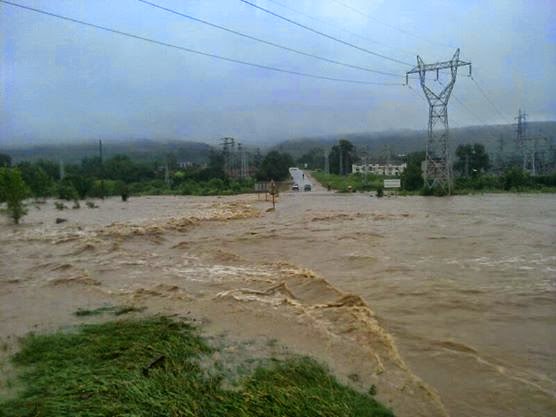 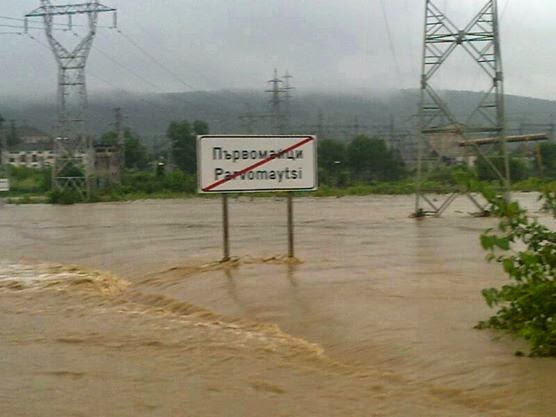 Flooding is not unusual in the summer, but that is normally due to the ground having been baked like concrete. The water is unable to penetrate with any great effect, and so this can lead to flash flooding. Looking at the amount of man made rubbish caught up in these flood waters, 'civilisation' is also partially at fault. Cutting down trees, removing hedgerows and altering watercourses doesn't help matters either. 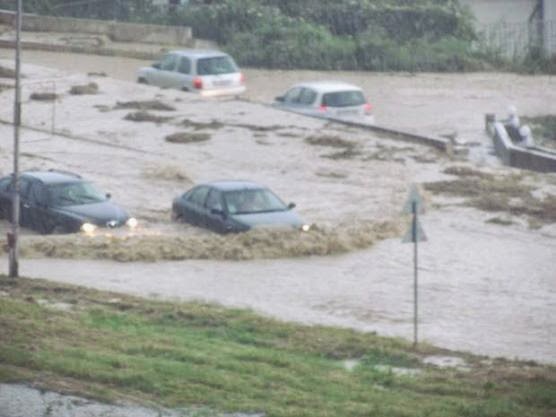 Many will have seen the news footage of this summer's flooding in places like Varna. Unfortunately this flooding either directly, or indirectly caused 12 deaths. It is probably safe to say that no-one predicted over a month's rainfall in the space of 24 hours. There were drainage ditches and culverts in place, but some had been partially blocked with illegal rubbish tips. I also seem to remember hearing that part of this drainage system had been damaged and interfered with. So the overall effect just seems to have snowballed, and some people were even likening the rush of water to a tsunami. With the way that cars were shown being thrown around on our TV's, they were probably not far off of the mark.

Another problem that people had to face was the mud. Anyone who has been to Bulgaria when it has rained will know just how sticky this mud can be. People were shown risking their own lives to help out their friends and neighbours. Those living in the lower levels of apartment blocks were invited to stay in neighbour's apartments above the water level. 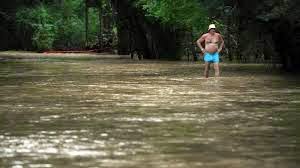 This time it seemed to be Varna which bore the brunt of things, but it could so easily have been anywhere in the country. Around this way there was some general flooding, with minor damage. We were told that at one point the River Yantra in Veliko Tarnovo rose to 6 metres. The problems were not just confined to the coast as places like Kilifarevo were also hit. Roads have been damaged, homes have been wrecked, and businesses have been affected. The cost of sorting things out is going to be astronomical, and I only hope that the money goes to where it is genuinely needed and not to tarmac some politician's driveway and refurbish his house. 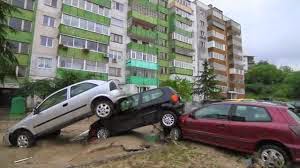 Things have been slowly getting back to 'normal' in many areas. Collection points have been started to help those unfortunate enough to have been caught up in all of this. As the water levels have receded, the flies and the mosquitoes seem to have gone into a breeding frenzy. The little buggers seem to be everywhere. We have tried various bug repellents, fly sprays and citronella things. The Aikon and Fendona sprays, which we normally use, are proving largely ineffective. These bloody bugs are just laughing at us as they swoop in to take another bite. Some evenings I look even more like the Elephant Man than I usually do. One things that they haven't overcome yet is the good old-fashioned fly swat. If you have ever wondered how come Bulgarians have got so good at tennis, try a summer here with only a fly swat as your means of protection. 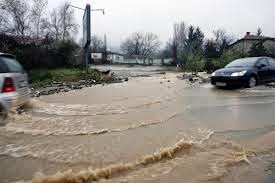 The rains departed and people began to look forward to the summer actually starting. The temperatures began climbing, and with them the ground began to dry out. Well the moisture in the ground seems to be almost boiling off, as the humidity has ramped up sharply. You wake up all sweaty and go for a shower, the humidity levels make it difficult to dry yourself off. As soon as you put so much as a sock on, you are once again sweating like a marine in a spelling test. The ladies probably can't wear much make-up as it would soon be sliding down their faces. So at times it feels as though I have become a walking fly paper. 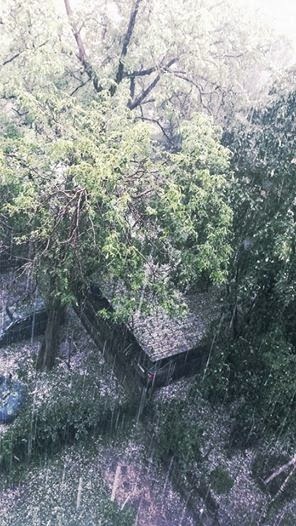 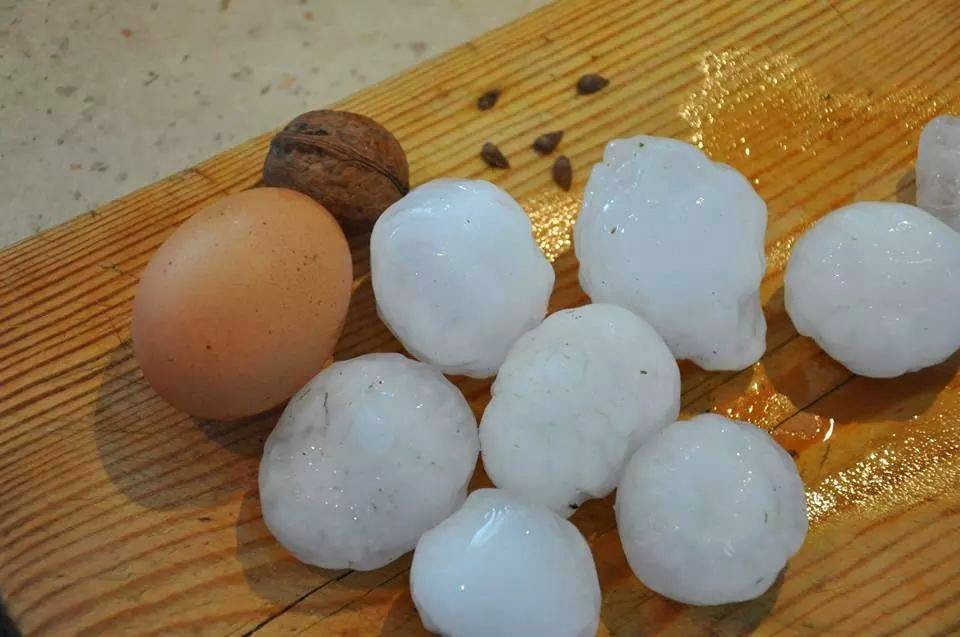 As if that wasn't bad enough, Sofia had a hailstorm the other day. Not the normal pea sized hail which you would expect to see around the end of autumn. These were great big things, I had seen a photo showing hail stones the size of a tennis ball, but as Sod's Law dictates I couldn't find that picture again so I have grabbed a few from the internet and from friends just to show the kind of thing that I mean. Once again it has been no laughing matter, as there was 1 death and over 40 injuries reported. Yes, I did check the calendar and it is definitely July, but with these strange weather events I am beginning to wonder whether my calendar had problems in the printing stage. 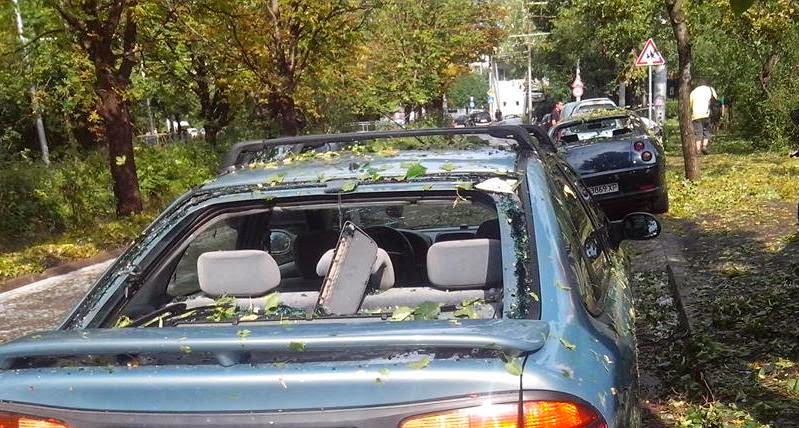 Homes and businesses had their windows broken. Car windscreens, both front and back suffered. Some of the worst hit were open air car parks and used car lots. There would have been no protection for the vehicles, and I am guessing it would have been very unpleasant for those who were caught up in it all while they were out and about. Now is possibly not a good time to ask for ice in your drinks while in Sofia. I know that double flazing firms seem to be ten a penny, but I have yet to see anything like Auto Glass over here. It is probably about and its just me not being observant though. 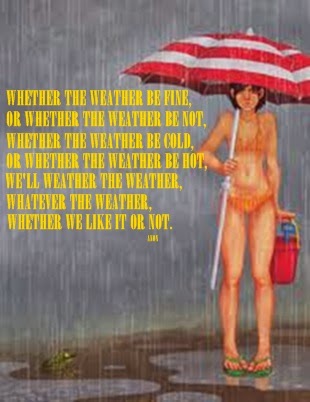 So to sum up the summer so far. People have grown webbed feet due to the incessant rain, various lichens and fungi are now growing on everyone. We have all turned a uniform mud colour, and are slowly cooking ourselves, while dodging rocks of ice. So welcome to the summer, the good news is that I haven't heard of anyone saying that they'relooking forward to the winter. Yet, but there is still plenty of time.

In the meantime I have dug up this weather poem which I remembered from my childhood, and it just about sums things up.