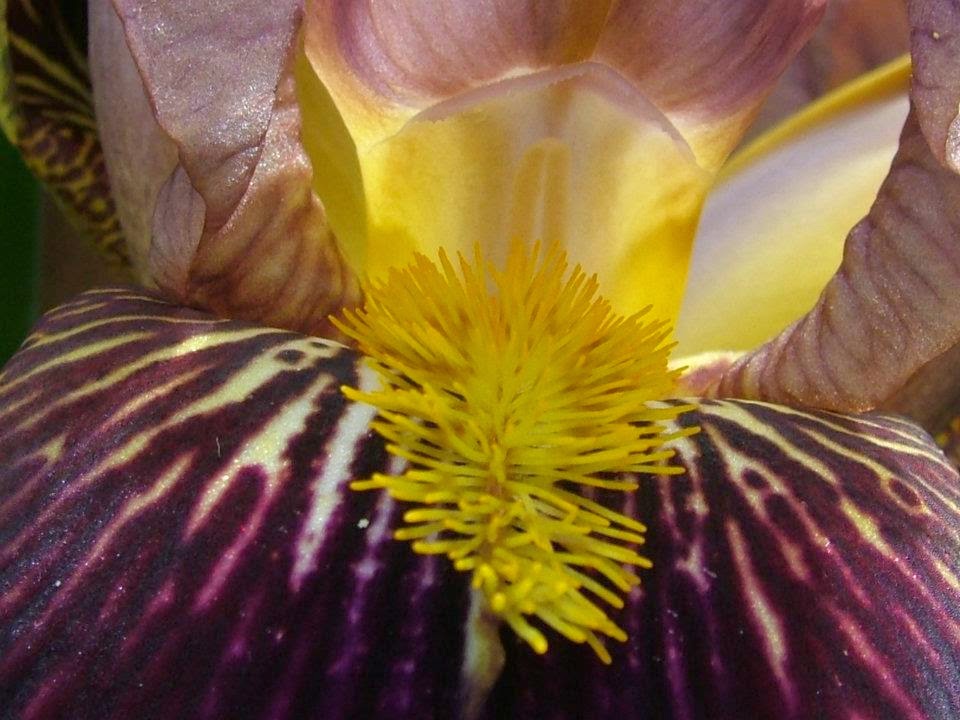 The other day I was busy looking for some music CDs to take over to the barn. I knew which CDs they were, and Net knew which CDs they were, as we had made them last year. As often happens they were possibly put somewhere either safe or logical. If they were somewhere safe, then we probably wouldn't have actually found them until CD players were a thing of the past. So it seemed like the logical place to start looking was with a lot of the other CDs and computer discs. Now it was while I was searching through all of these discs, that I discovered that half of them didn't even have writing on. This wasn't too much of a problem as the weather was a bit on the manky side of things. So sitting at the computer I was feeding these discs in just to find out what was on them, and then writing a brief description of the contents. I got to one disc in particular, and I guess that you could say that I got kind of side-tracked. The disc in question contained a lot of our old photos. These photos also included shots of the house from when we bought it.

I thought that it would be interesting to see just how far we have come in the last five and a half years, and the changes that we have made. The main difference is that originally the house was in three parts. There was the living area, the sleeping area and the cellar. None of these parts were actually connected, and to gain access between them meant venturing outside. Also having three separate areas didn't make sense security wise, but now the dogs can roam the whole house without getting wet or muddy paws. I do have to say that the house was liveable when we moved out here, so the changes that we made could be done room by room. 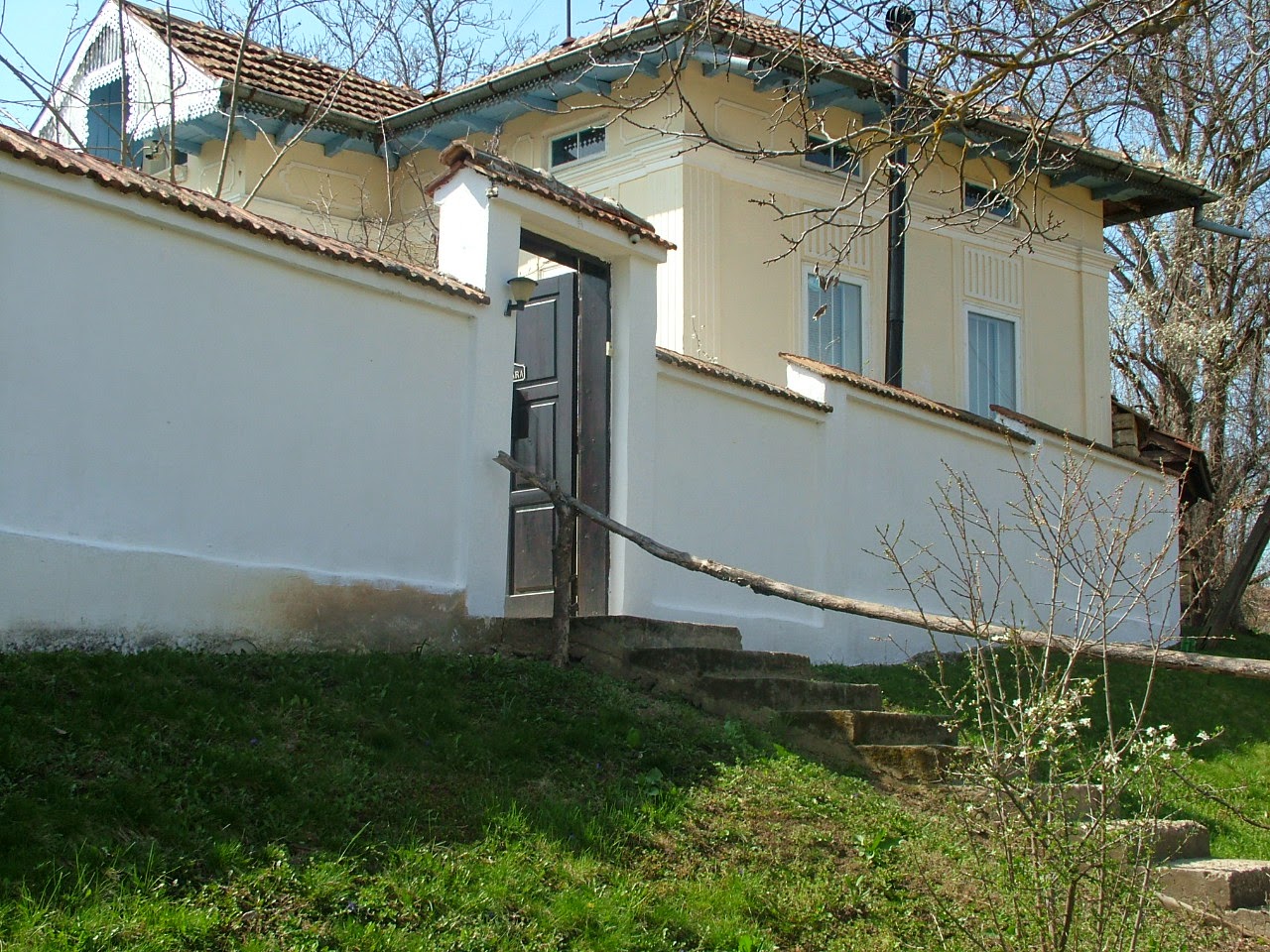 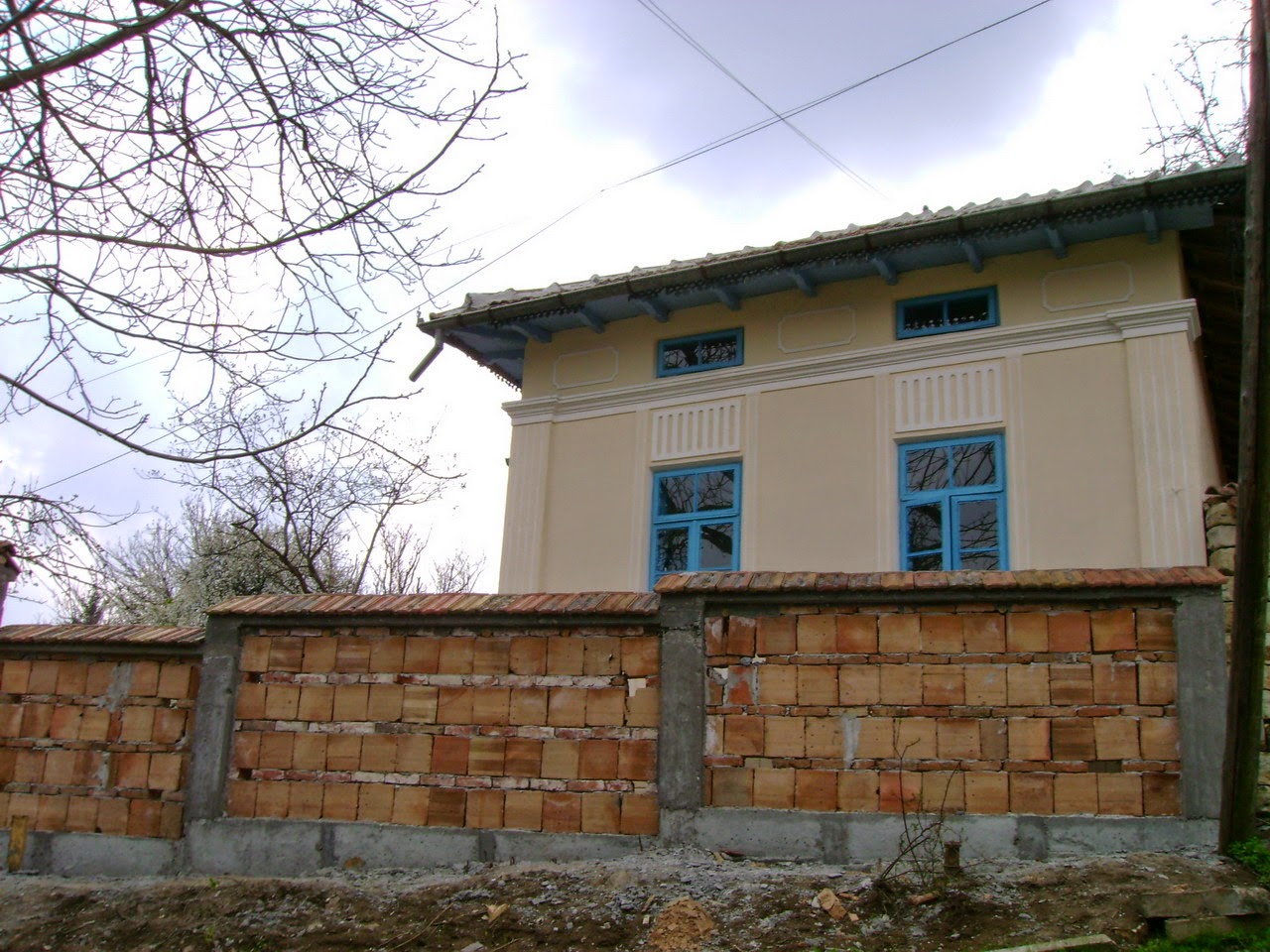 The outer wall is possibly the first thing that people notice, well that and the grass banks outside. We are slowly reducing the number of weeds out there and replacing them with grass. It still needs cutting, but I guess that is one way of me getting some exercise. 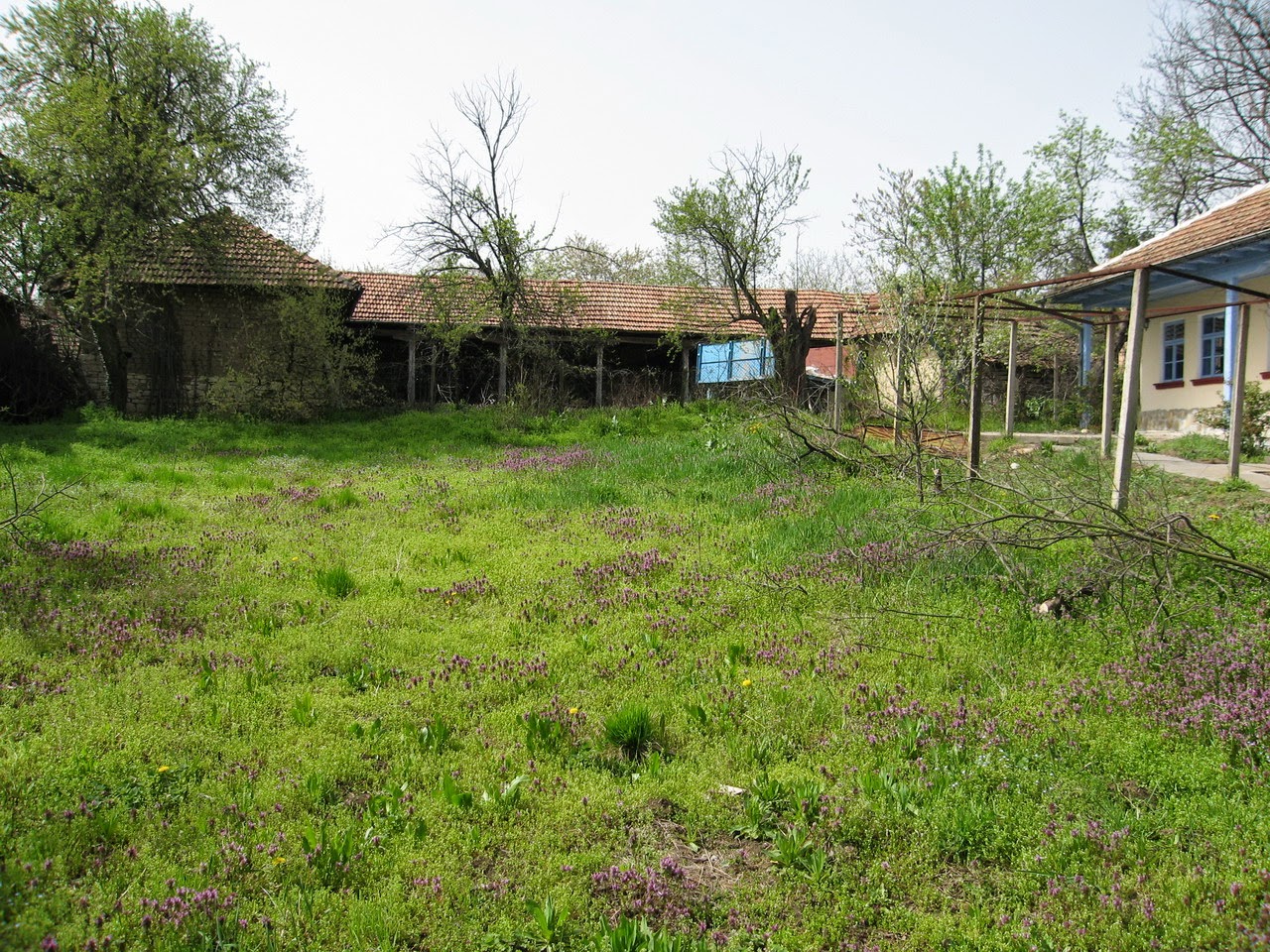 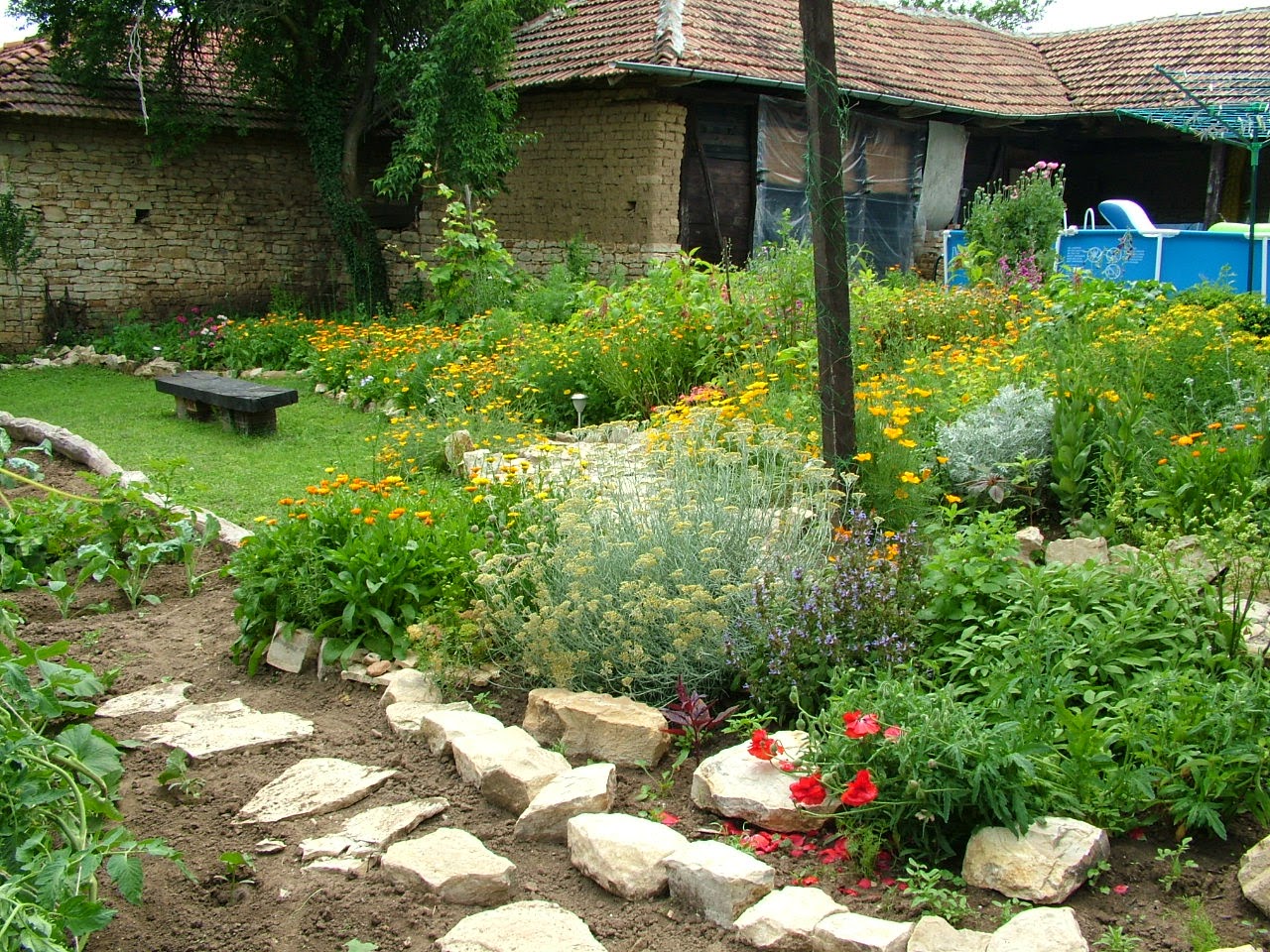 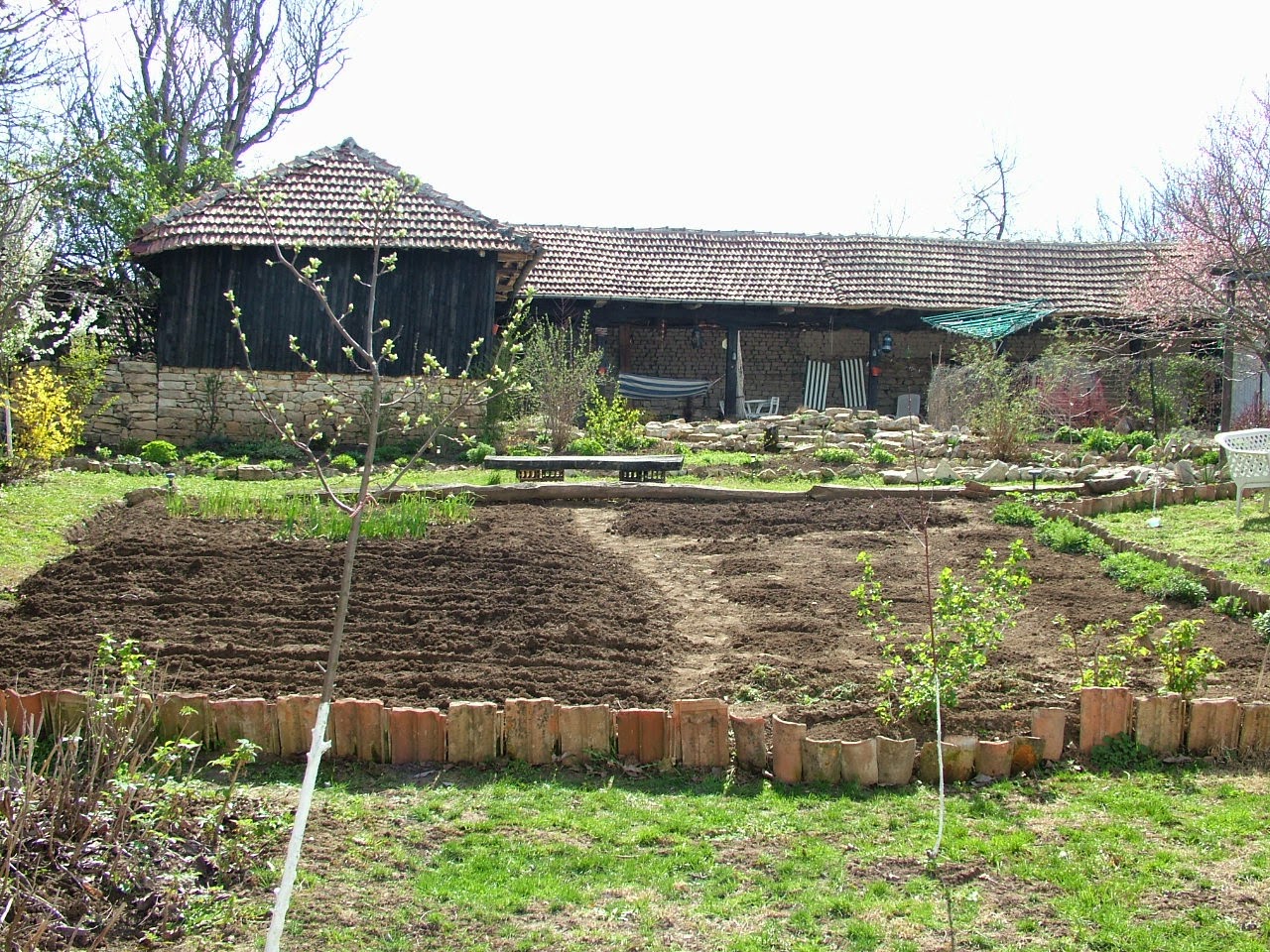 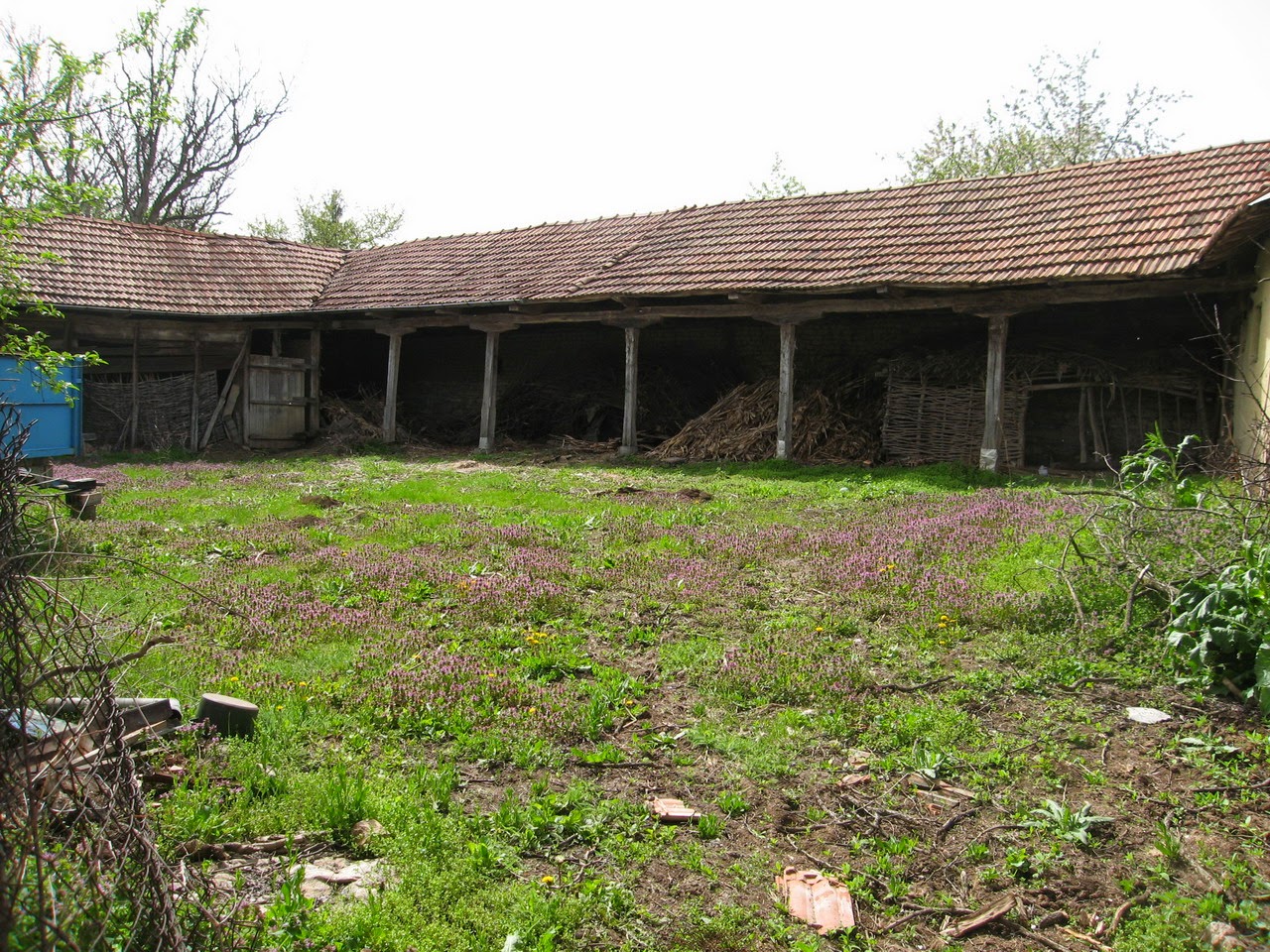 Trying to tame the garden, and get it into some sort of shape has taken a lot of willpower and determination. As much as I would like to take some credit for this, it all really is down to Net. I am just there to do as I am told, and some of the more manual type things. I do have to admit that Net has managed to create a very nice garden with flowers and shrubs, and still enough room for the vegetable patch and the pool and washing line. 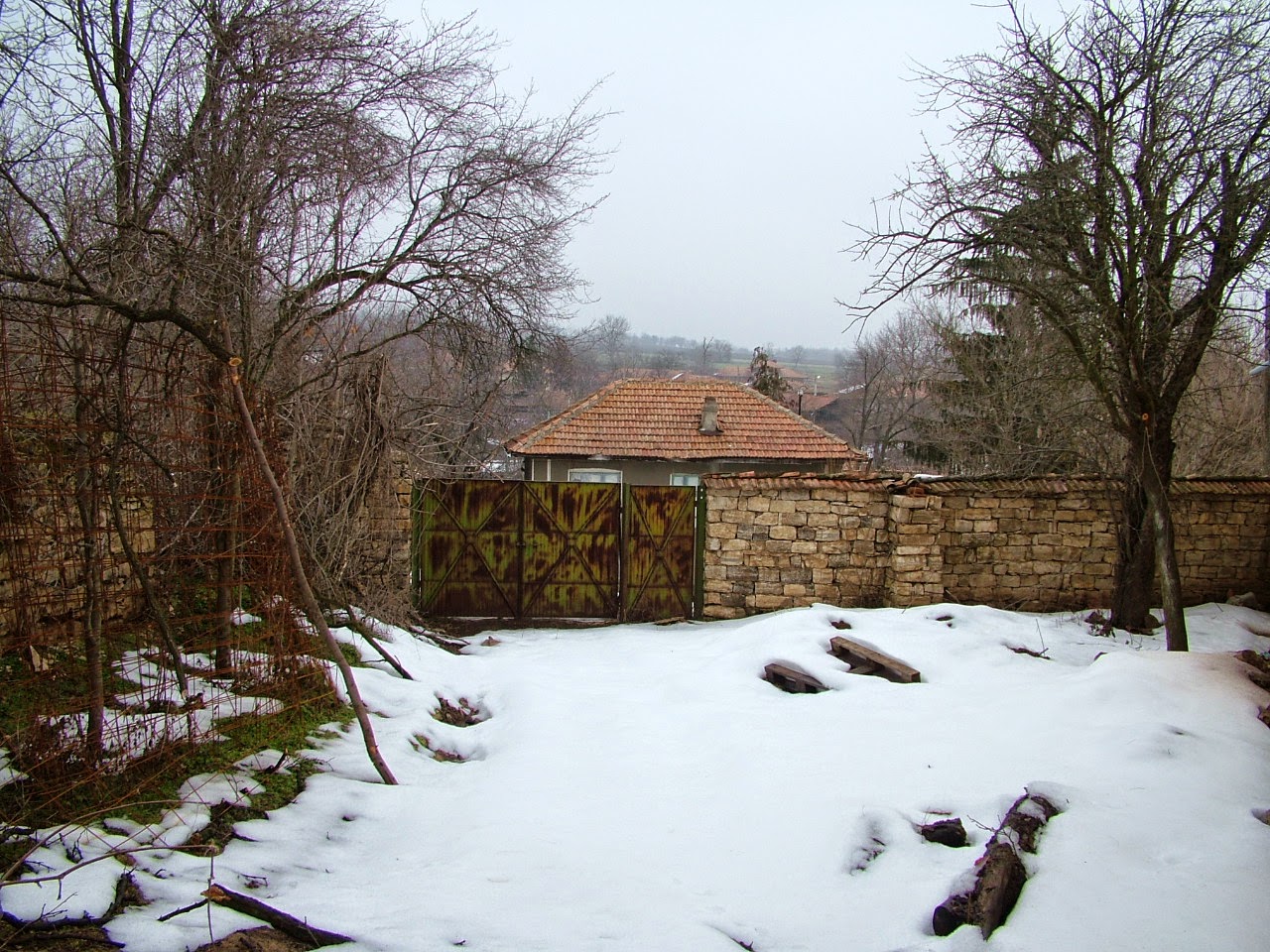 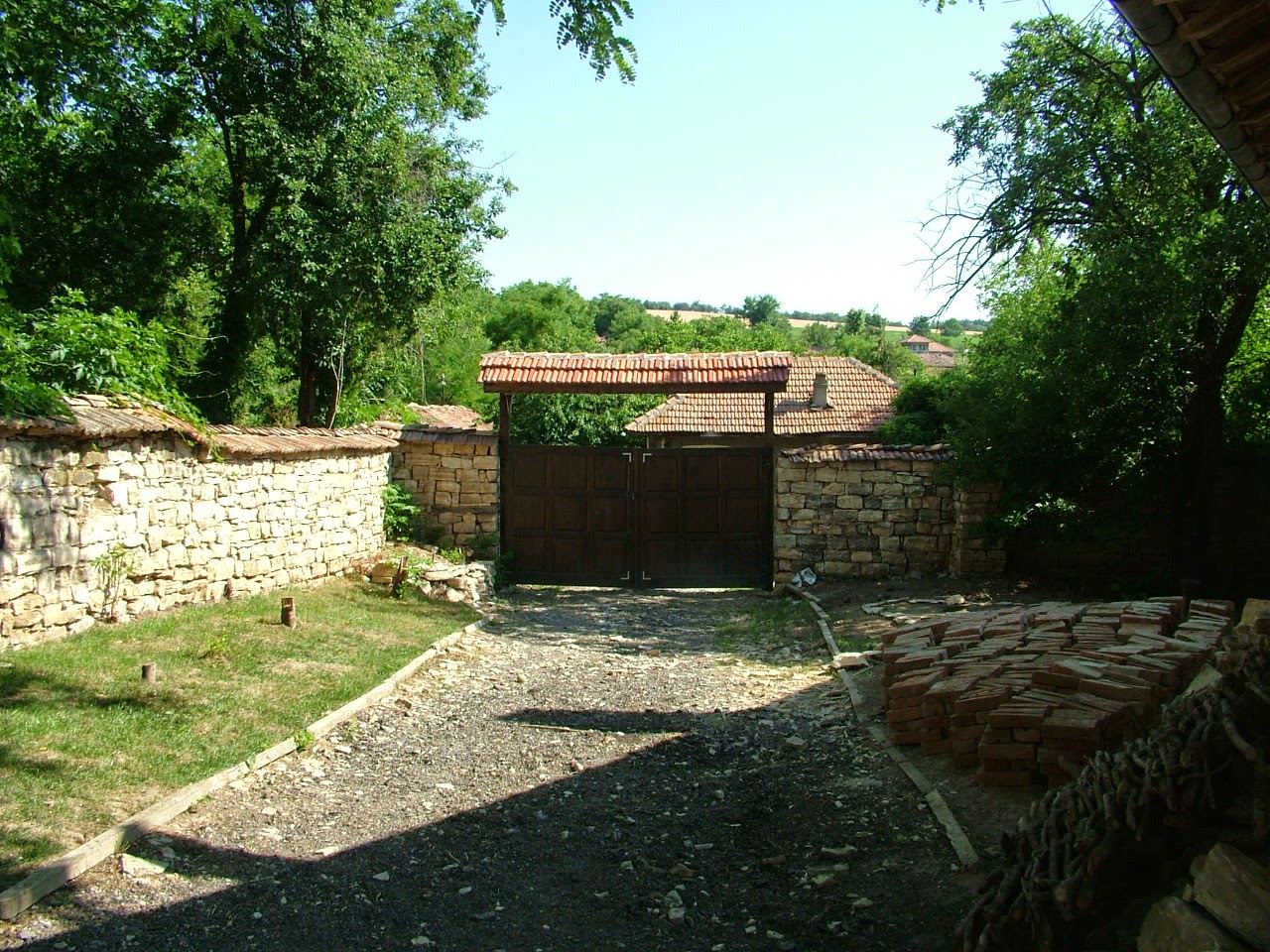 We did have some problems at the back of the house, where some of the boundary wall had gone missing over the years. Not ideal when you have large dogs, as you wouldn't want them marauding round the village. So sections of wall have been rebuilt, we had to get people in to do this for us as we had no idea where to start. Fortunately the old metal gates were replaced by the wooden ones, and the mud drive has twice been coated with gravel. 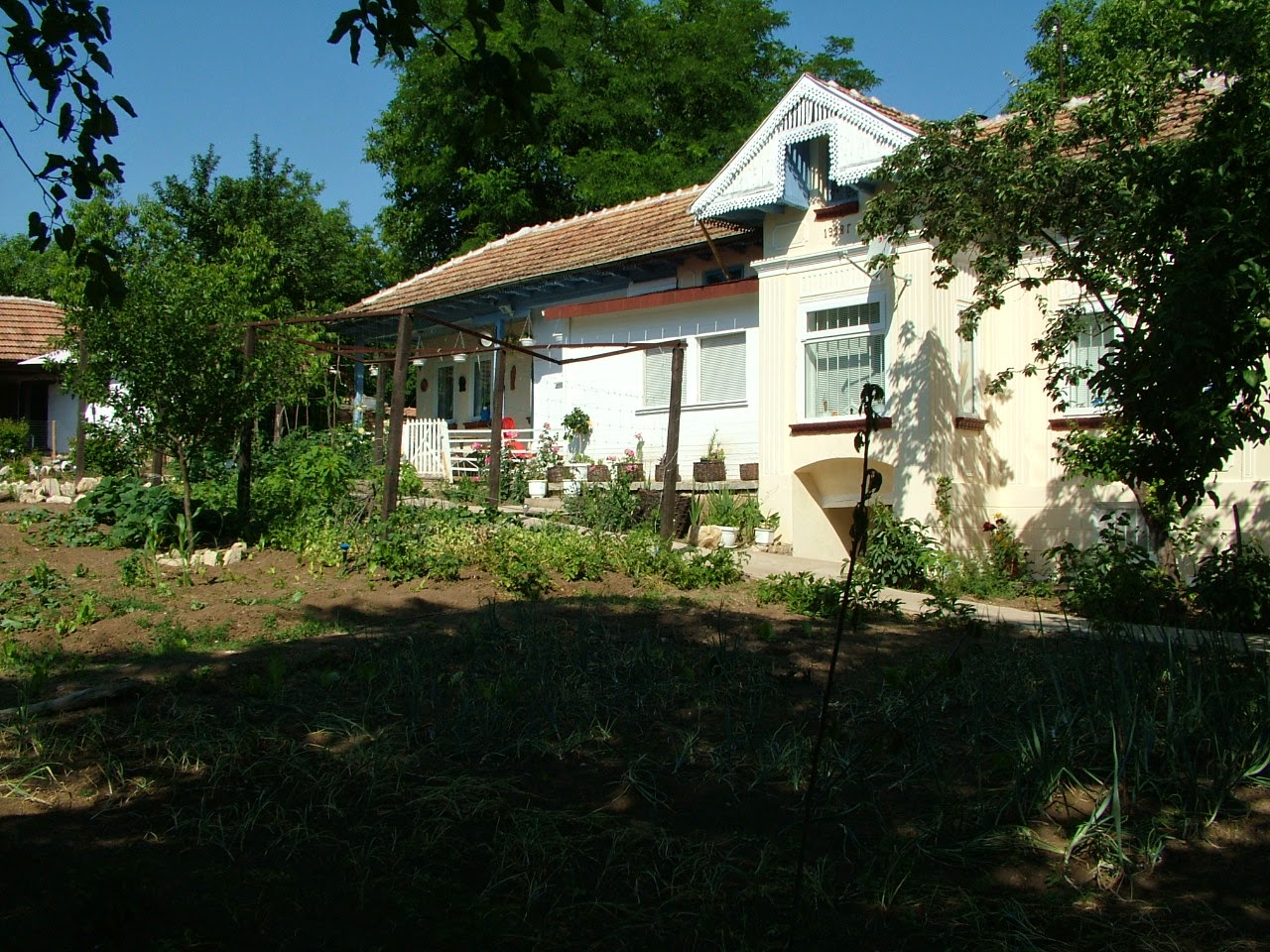 The main change to the house itself has been to replace the old draughty windows with double glazing. That first winter we had sheets of polythene across each window just to try and eliminate the breeze blowing through. We even fitted each window ourselves rather than have a firm do it as we were told how much mess they leave behind. It also meant that we were doing it a window at a time so we were able to level them up properly and then fit them with something more robust than just expanding foam. 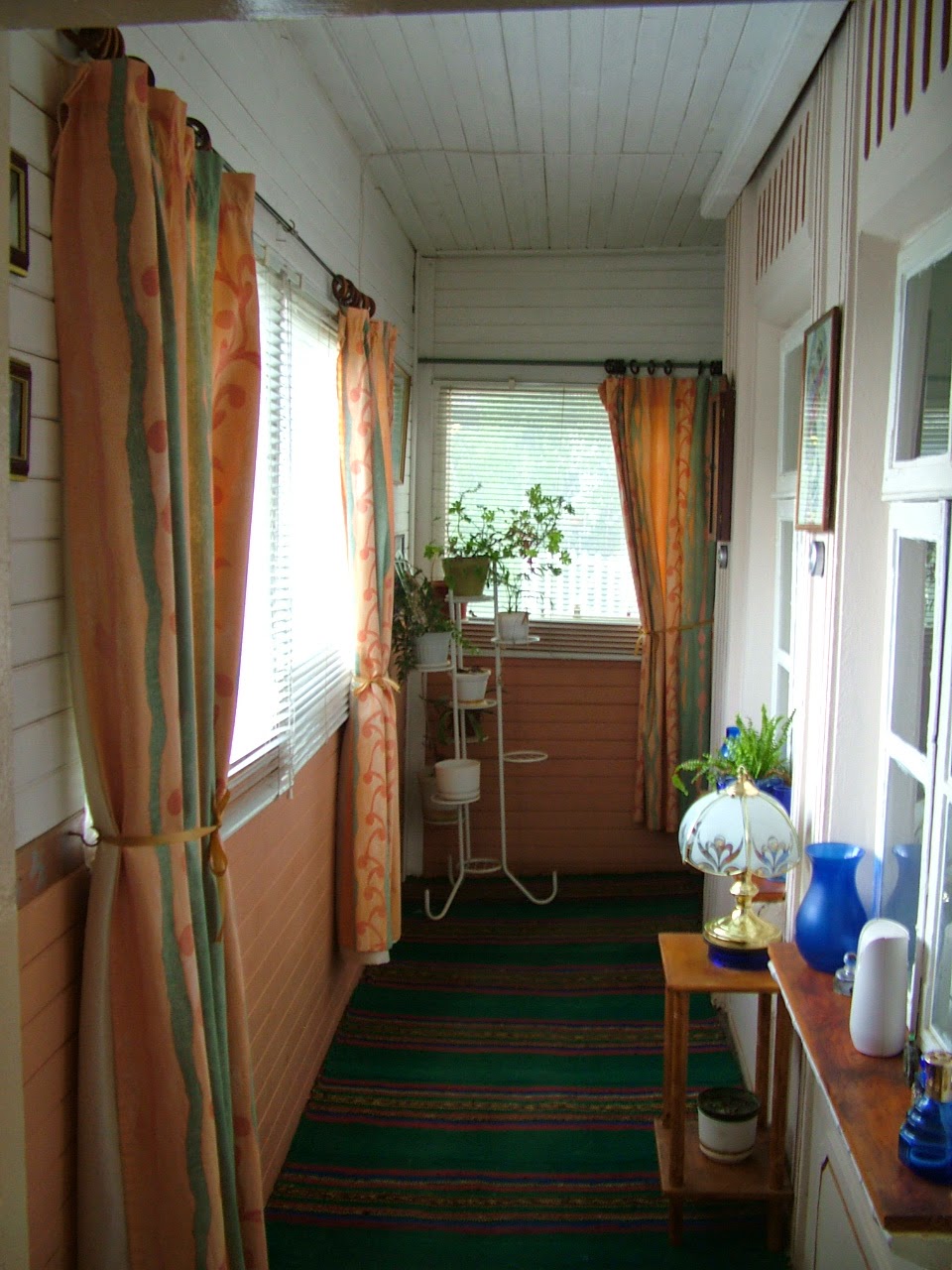 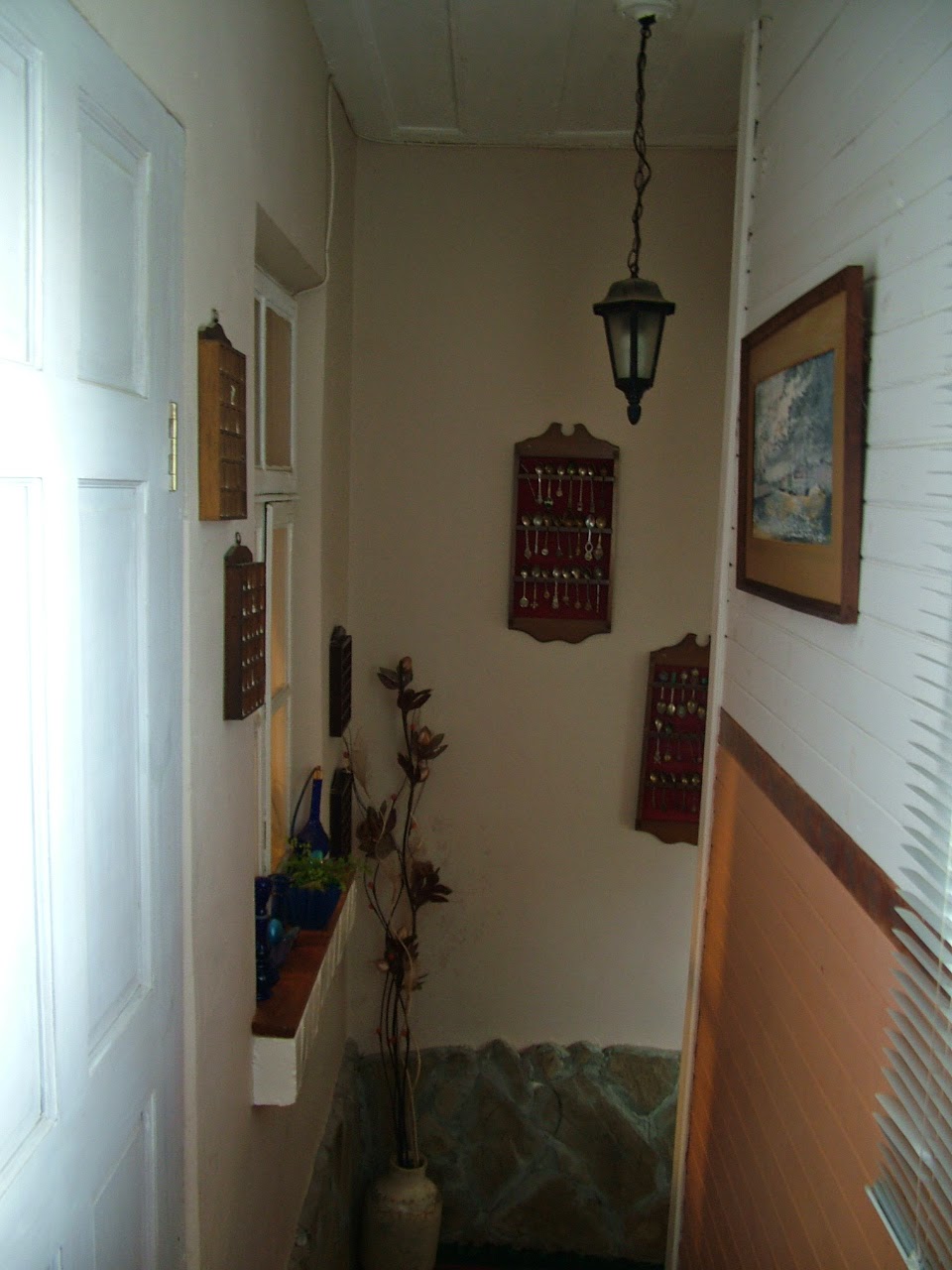 As you can see from the above picture the two closed doors opened into the living area, and the open door was the sleeping area. During the summer that would be no problem at all, but in the depths of winter it meant venturing outside just to go to bed or to the loo. This was overcome by simply enclosing part of it. As it also cuts down the draughts it has made the house warmer too, and gives us somewhere else to overwinter some of the less than frost hardy plants. The cats like to think that it is now part of their own personal racetrack. 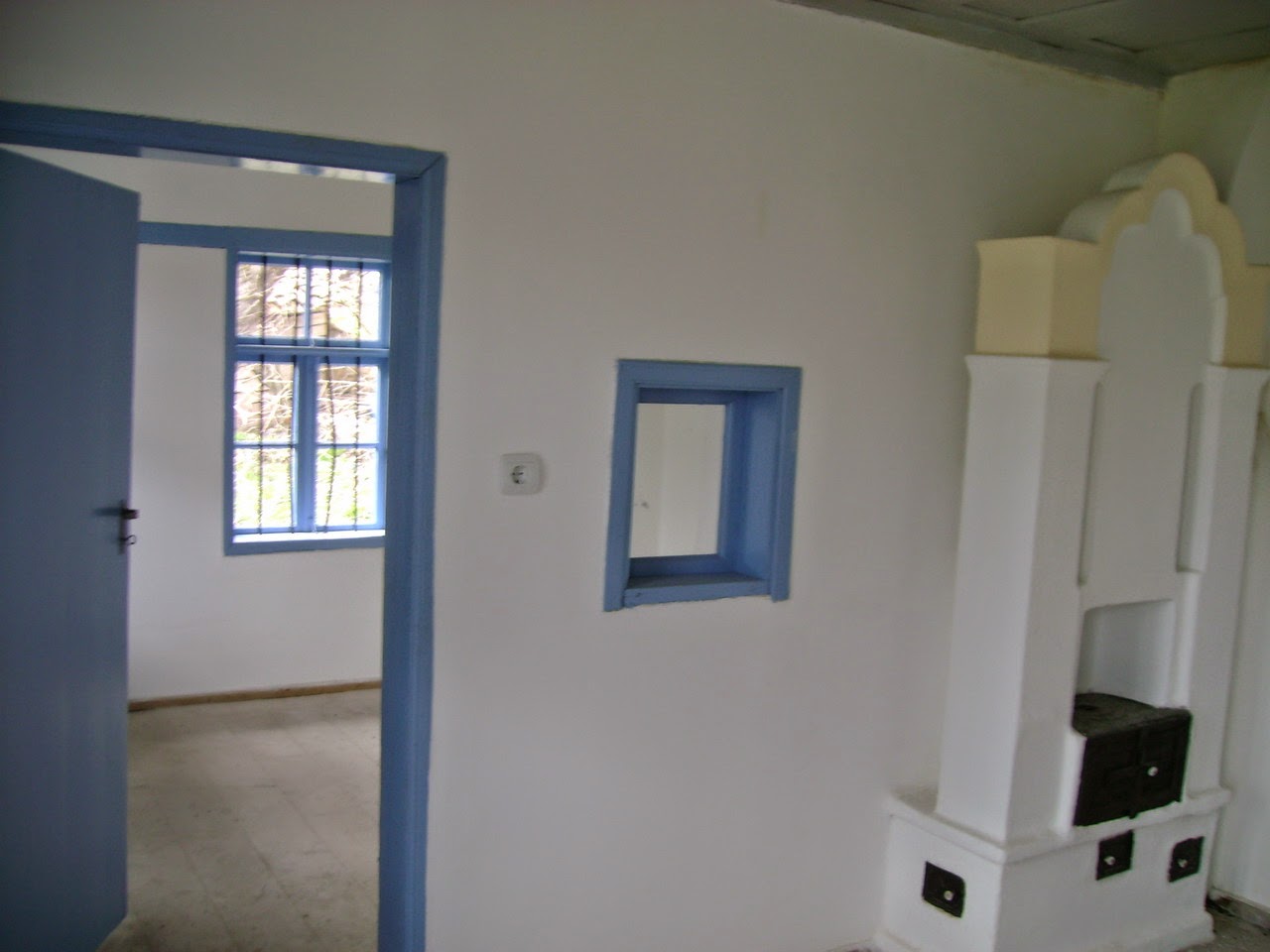 Originally we had a small kitchenette, and a utility room. With only one window the kitchen area was really gloomy in the winter. We would have had to run water up into the utility room anyway so we decided to take out the Jamal and the wall. The timbers in the wall were all burnt, so if you have these jamals please be careful with them. With the increased space we were able to make a kitchen/dining room, and with more windows it is so much lighter. I don't think that I did too bad of a job fitting the kitchen, as it was my first attempt. 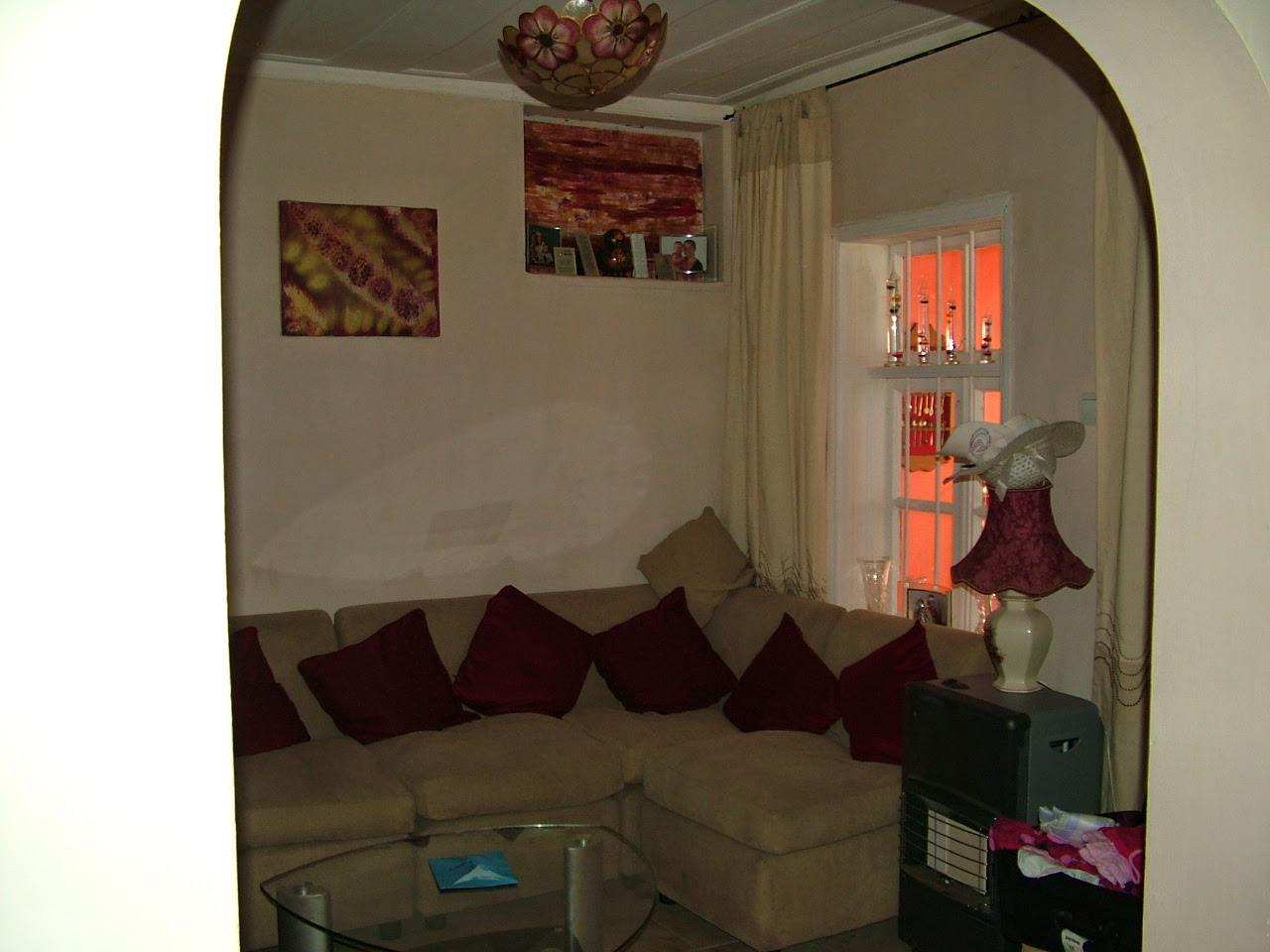 The small upstairs lounge has possibly seen the least of the changes. The fireplace is still there, although it now has a wood burner placed there. The existing chimney has been used to feed the flue pipes up. In the summer this is a nice cool room, and with the tiled floor refreshing on your feet too. In fact it is perfect for relaxing with a good book. 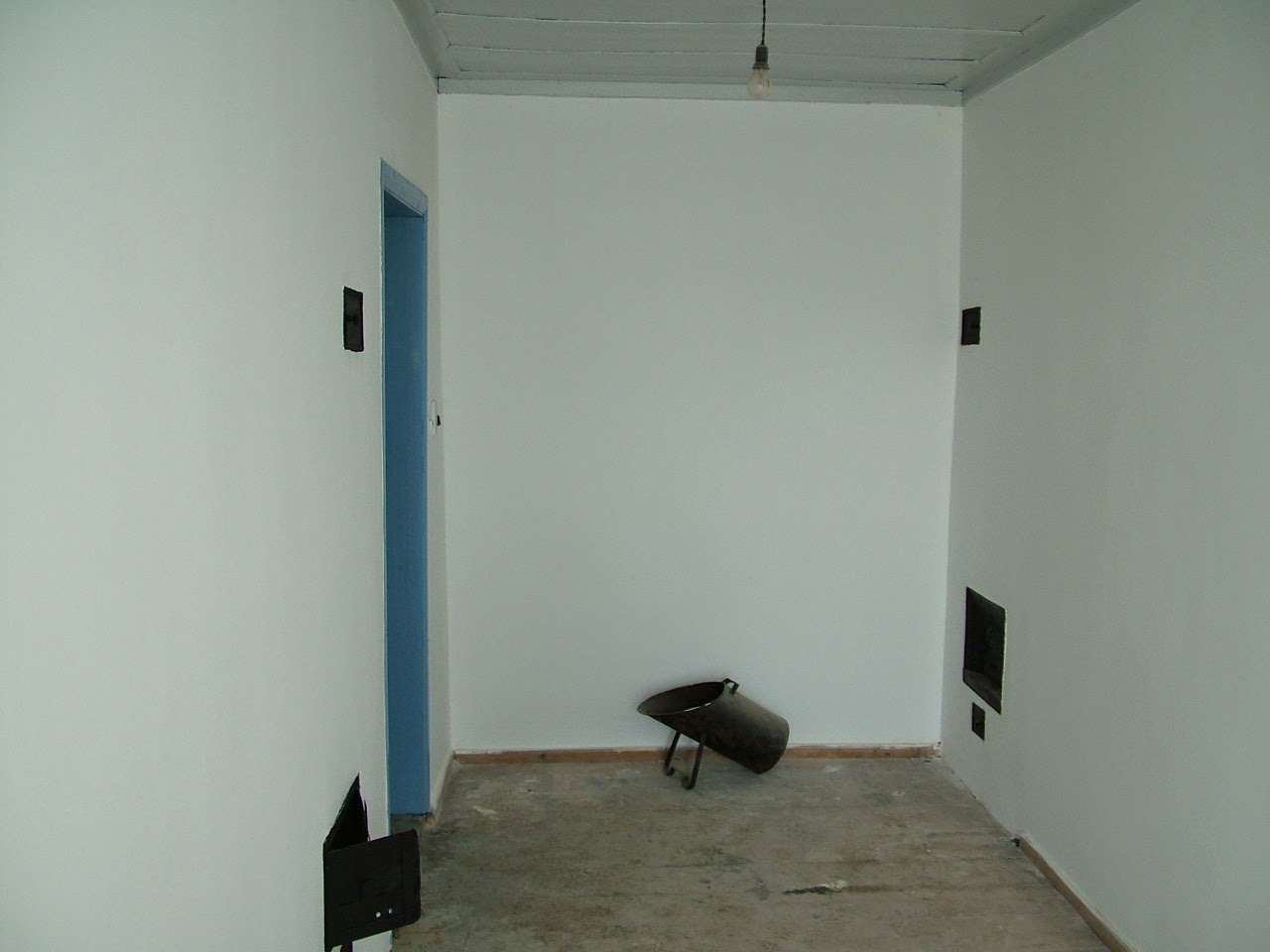 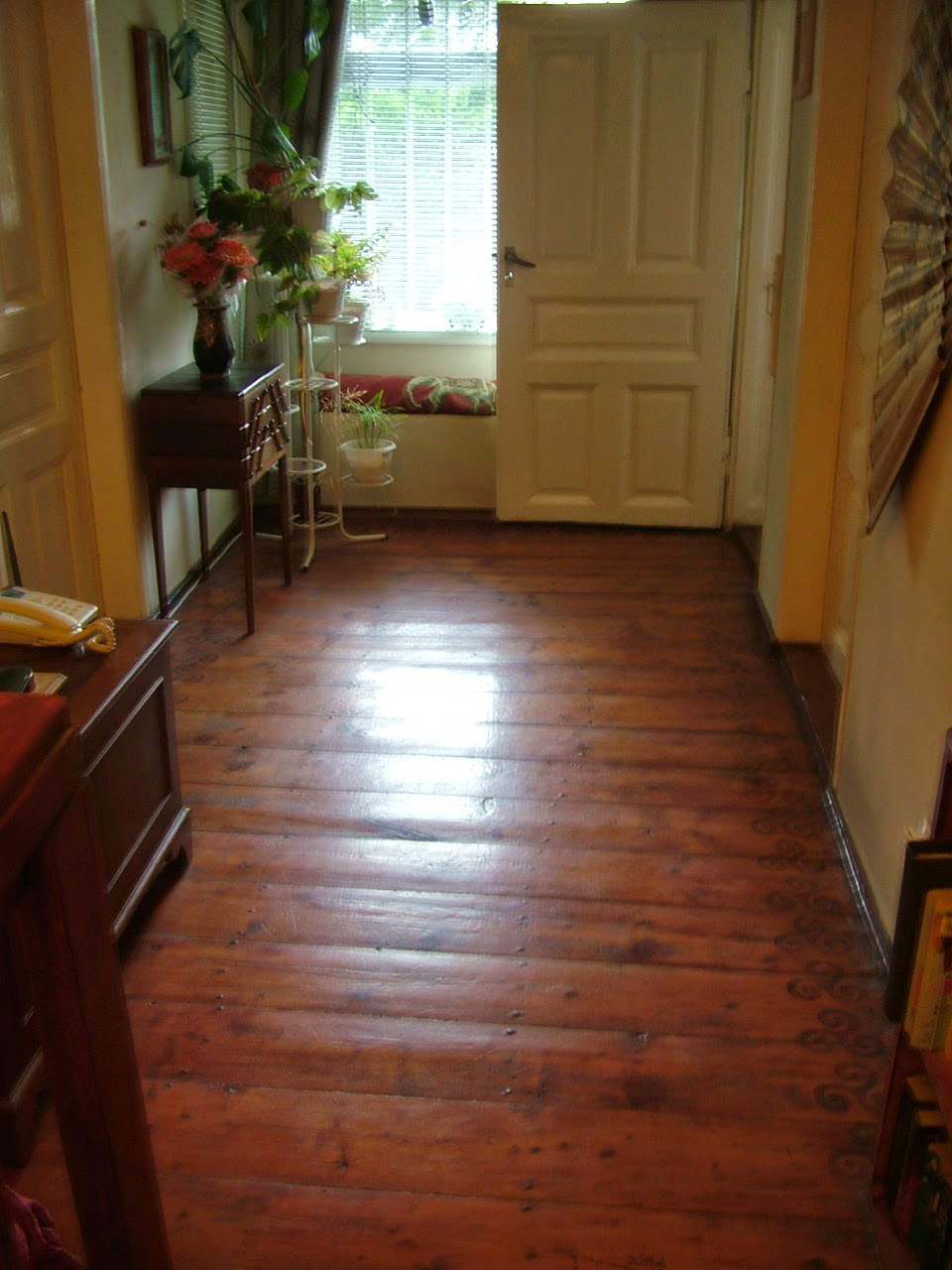 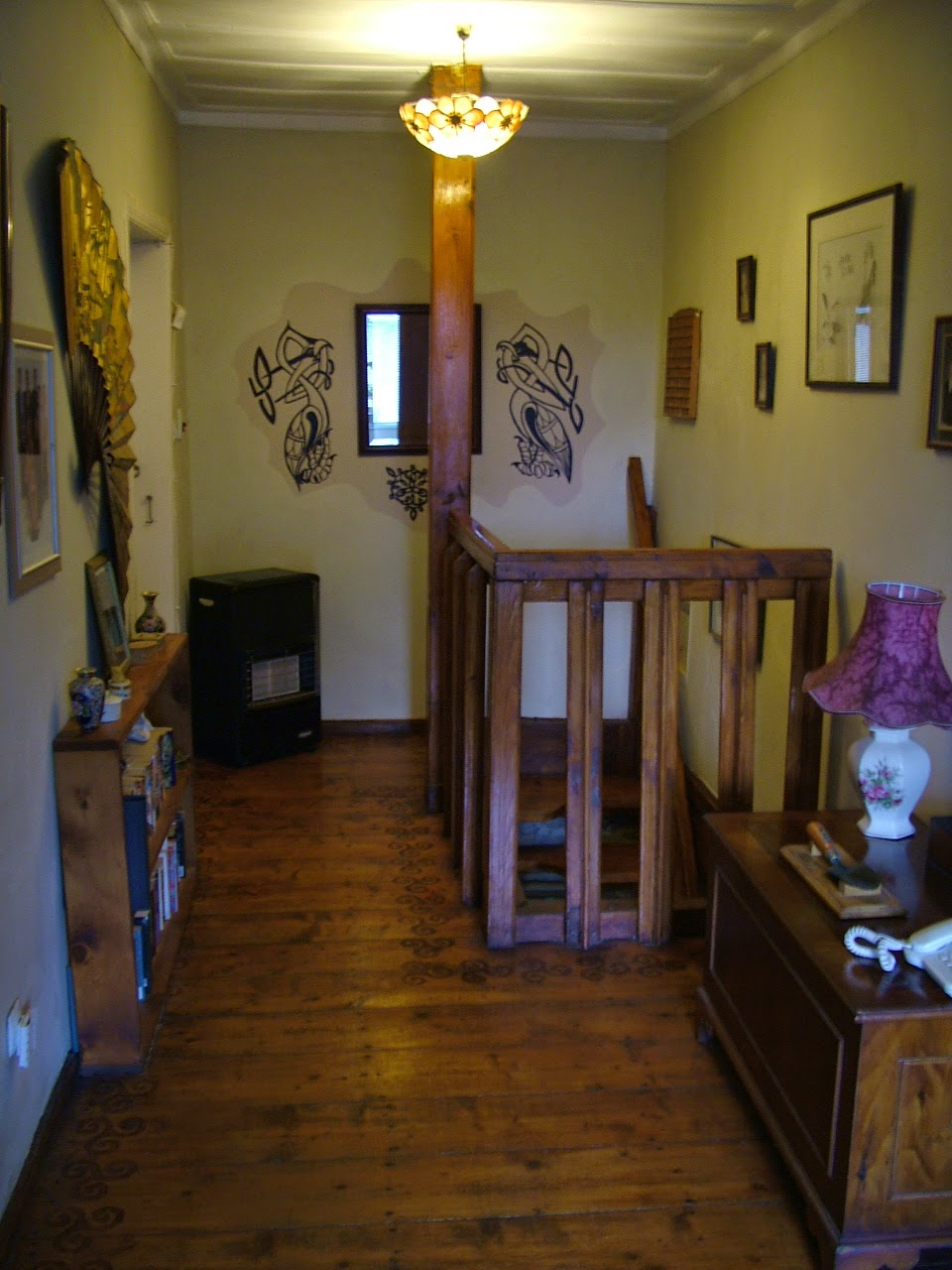 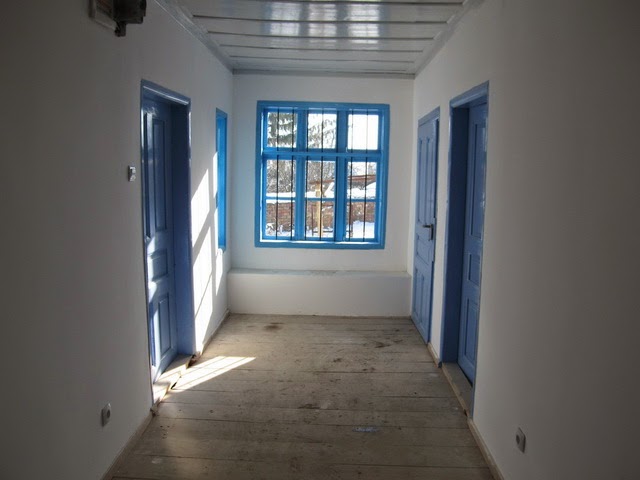 The hallway done in the sleeping end has had some major changes. Mainly due to the fact that we needed somewhere for the stairs to come up to from the cellar. We were fortunate that all of the existing floorboards were perfectly sound. So with a lot of sanding, staining and varnishing we have managed to achieve what you now see. You can just about make out the border which we created ourselves, using a darker wood stain. We protected the whole lot with marine varnish, which we hoped would be quite durable. It was a bit trial and error. In the winter the floor was still tacky after two weeks, in the summer it became one big fly trap. So if anyone is tempted to use marine varnish try to do so in either spring or autumn. If you have dogs and cats good luck with trying to keep them off of it all. 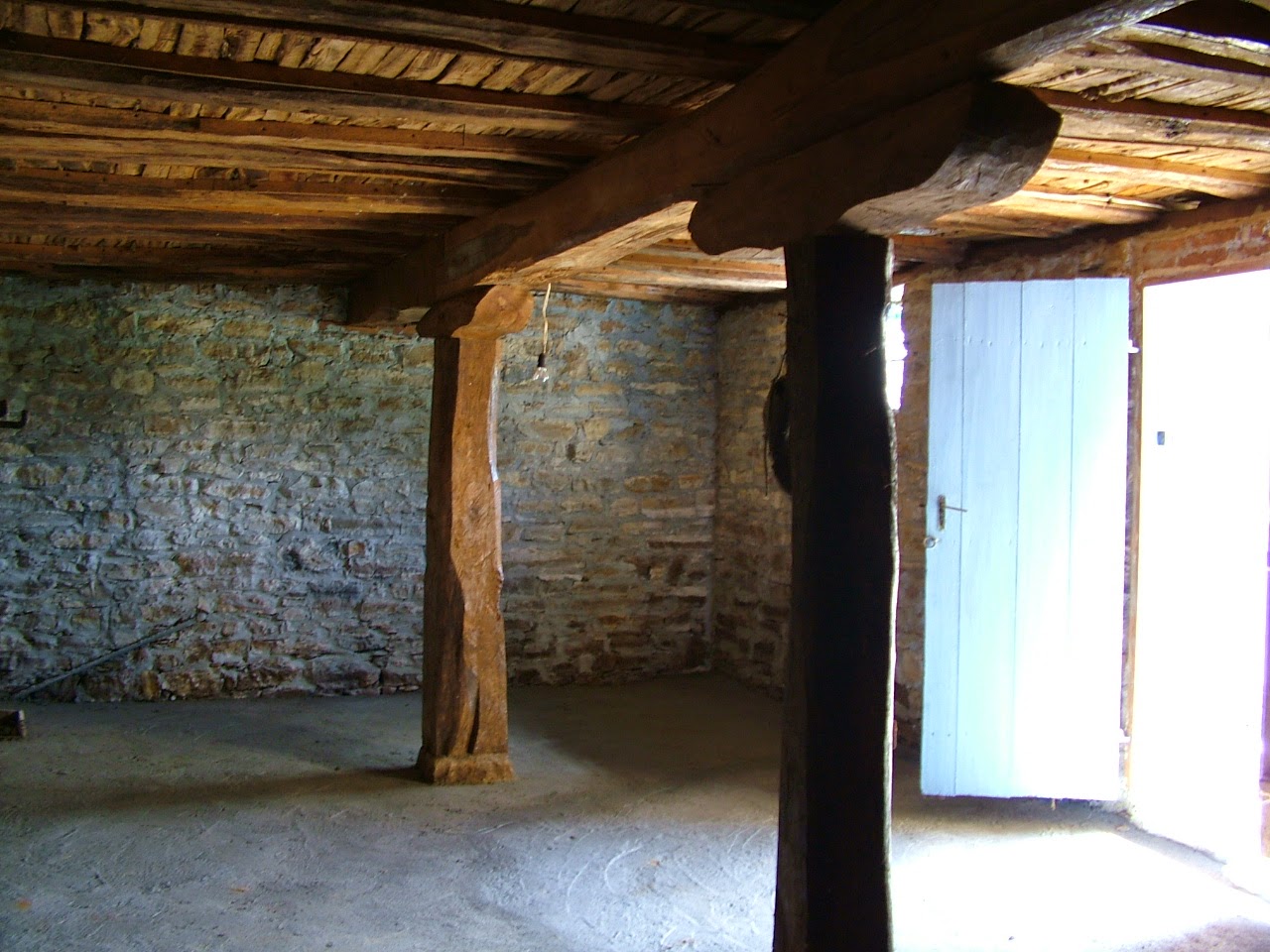 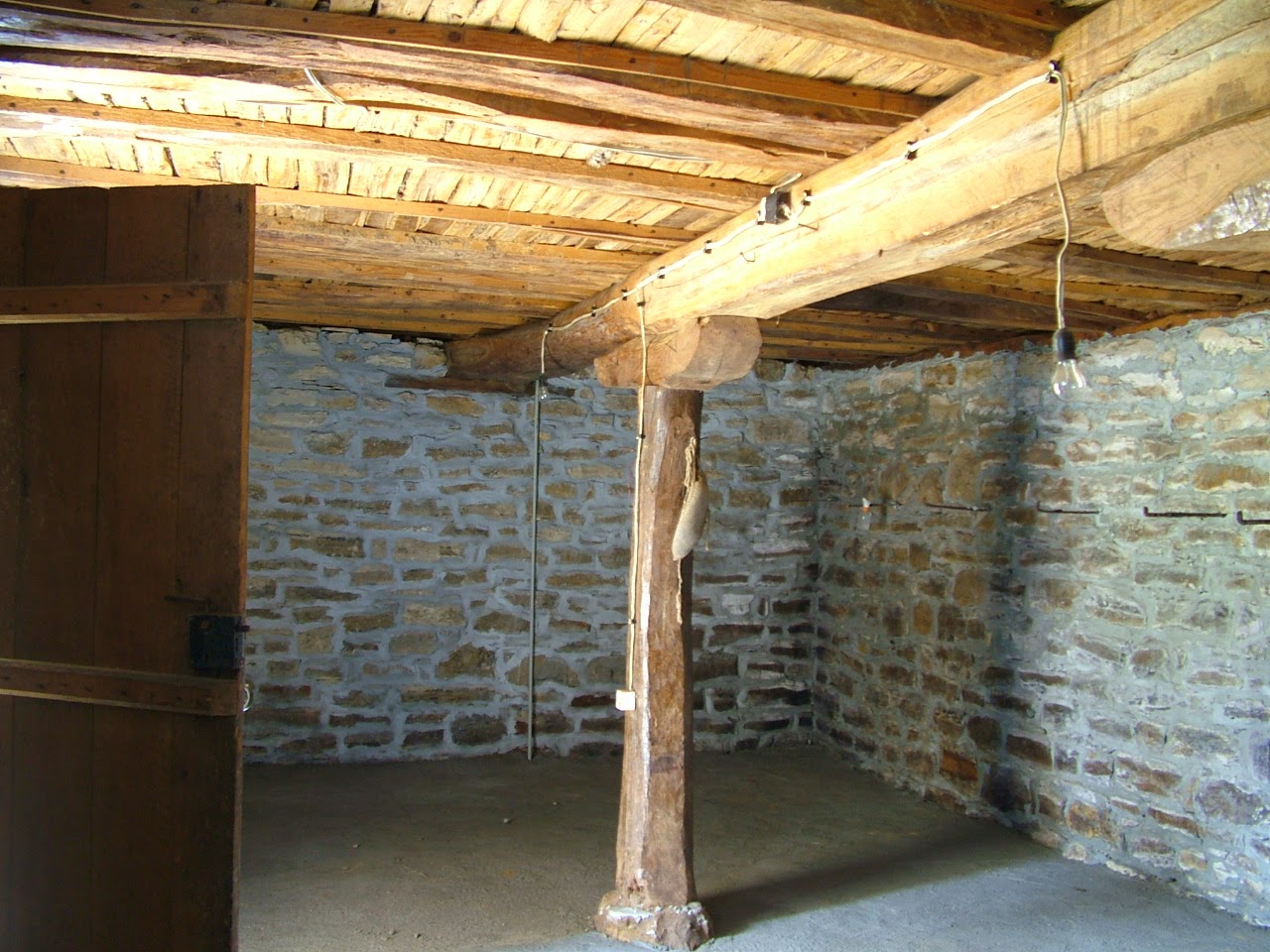 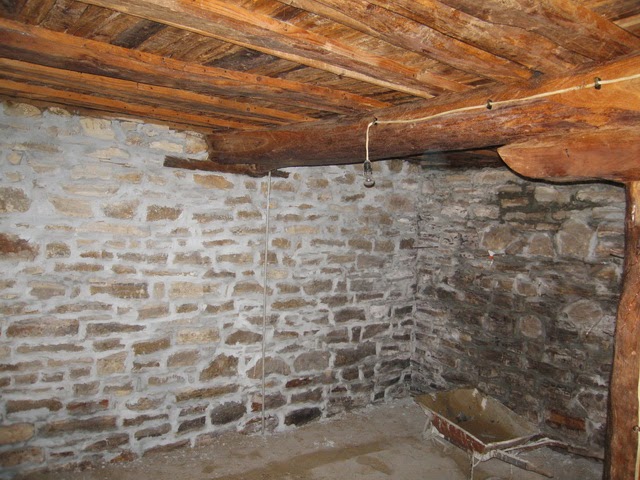 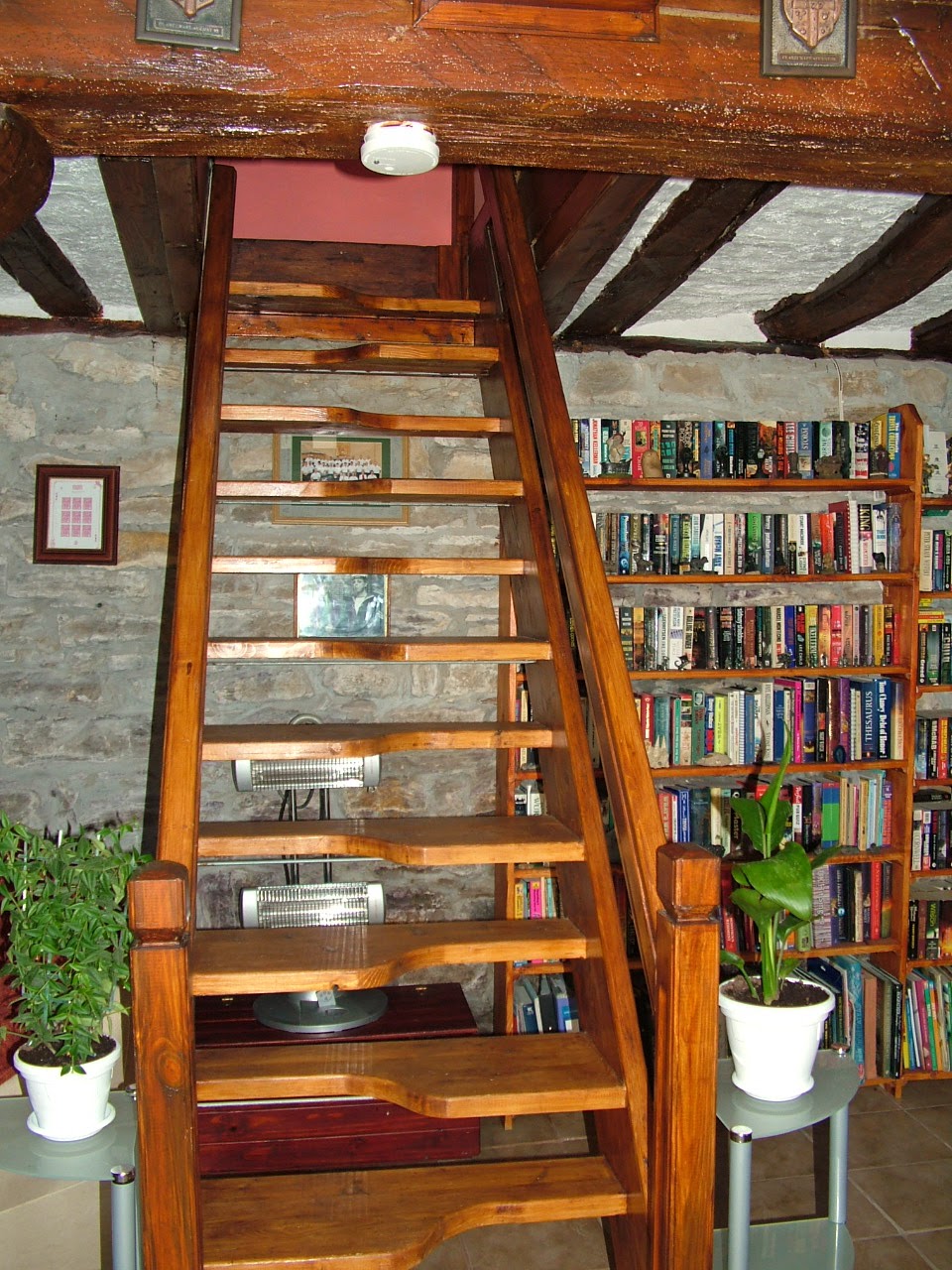 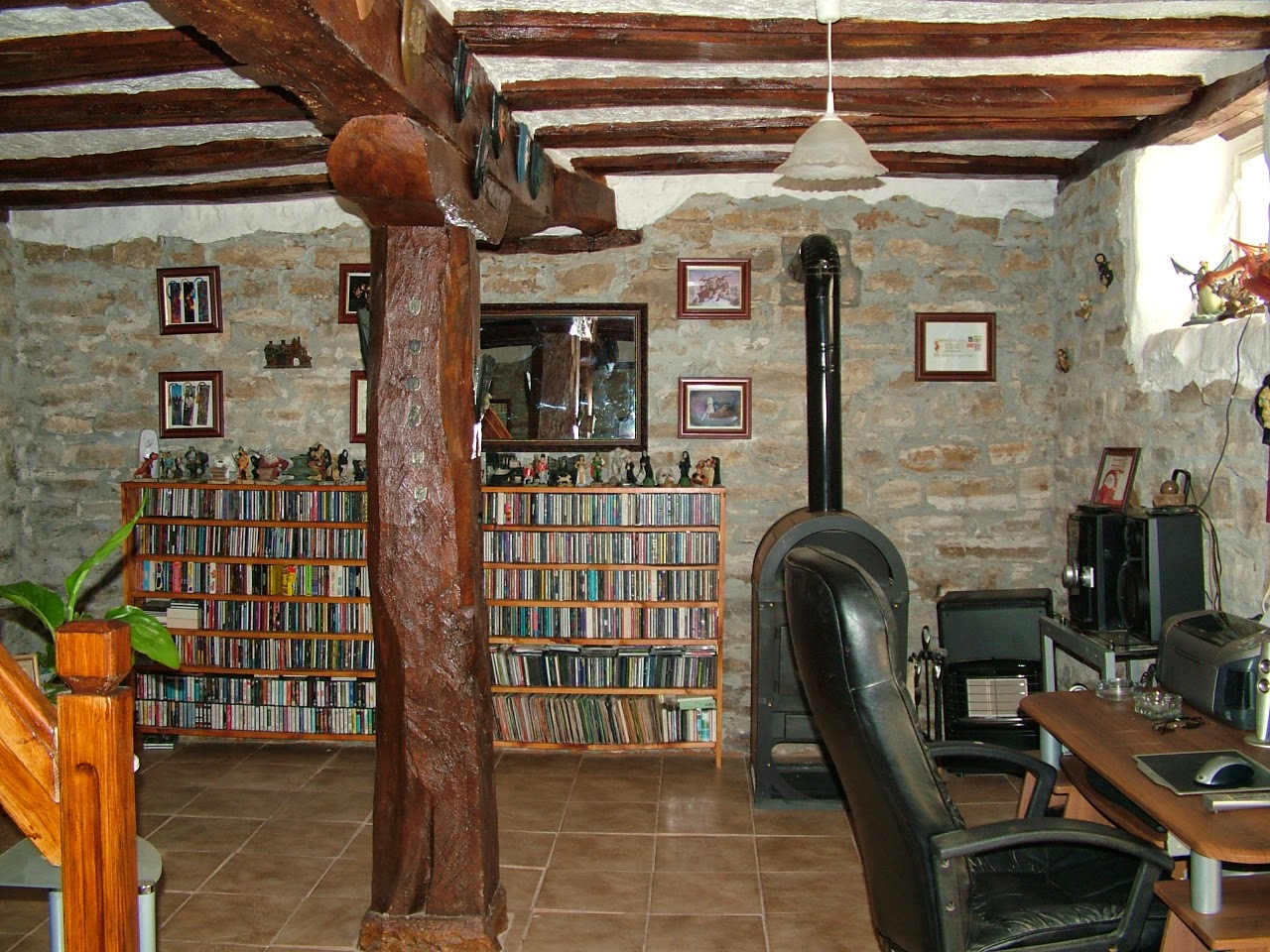 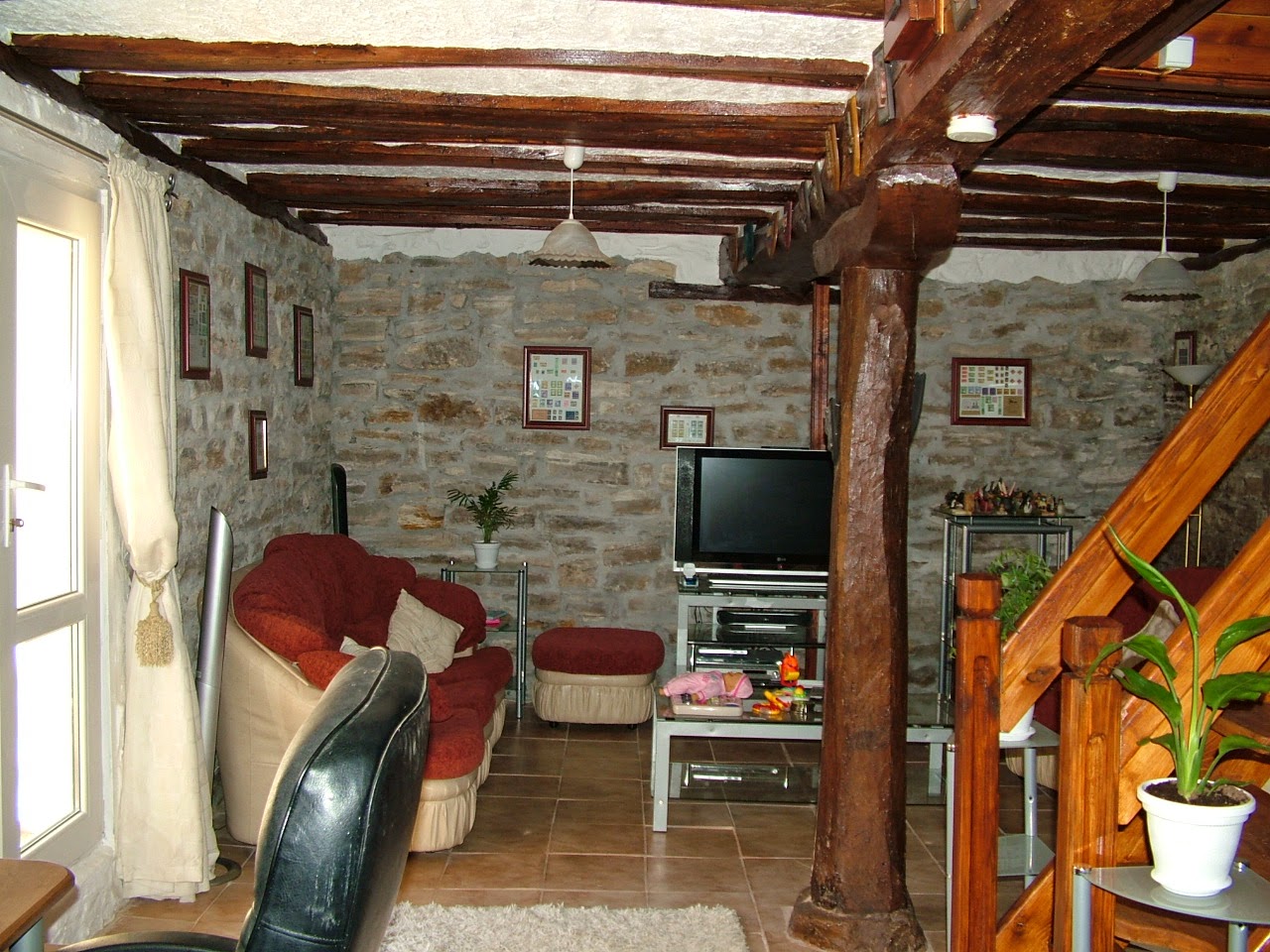 Finally there is the cellar, we have taken it from the pictures you see above, to the later pictures. I think that we have made a good job of it all. The stairs we had made, and fitted, but I wasn't totally happy with them so I ended up adapting them slightly. So more than five years on and are we finished? Not by any stretch of the imagination, but one of the most satisfying things is that much of the work has been carried out by ourselves. It just goes to prove that you never really know what you are capable of. It might not be a Palace but it is comfortable and getting the way that we want it to be.

Digressing slightly onto the blog figures, this time last year I put a little widget at the top of the blogs which would record everytime a new person viewed the blog and where they were from. In the year just gone more than 9000 different people, or different IP addresses have viewed the blog, and you have come from all over the world. In fact counting the figures up from 85 different countries. The total viewing figures are now standing at over 50,000, and none of this would have been possible without you. So once again I am going to make the most of this opportunity and say a very big THANK YOU to you all. I hope that you still enjoy these articles now and in the future, and that you will continue to share them with family and friends.
Posted by Unknown at 16:55