Tales From The River Bank

Firstly a word of thanks from me. Earlier in the year I set this blog a target of 25,000 hits by Christmas. Well here we are just into the beginning of November and we have already exceeded that figure. This is all due to you having taken the time from your busy schedules to read my ramblings and musings. The number of people who follow these blogs has also increased,  so a very big thank you to these kind people.

November is always a busy month as the work getting ready for the winter continues. Our firewood has now all been cut up into 'cheeses', we have been out splitting a fortnight's supply. It might sound a bit odd only doing enough for a fortnight, but during the depths of winter splitting more wood gives me some exercise every day. So what was previously split will have dried nicely, and will be replaced by the freshly split stuff. I don't know if this is the best way to do it but it seems to work for us.

The garden has been stripped, and made ready for the winter. The veg plot has all been turned and fed, the garden has been weeded and partially turned. The majority of the trees have finally shed their leaves, and now look so bare. This has meant several bonfires, especially with the amount of leaves which always seem to accumulate. I have even been up ladders sawing branches down from a walnut tree as they could potentially have damaged the power lines coming into the house. I even checked that it was ok to do so with the Kmet. Normally E-On would have done this but since they sold out to Energo Pro our village seems to have been ignored for such matters. While stood out the front talking with one of the neighbours and the Kmet, it got round to the internet and they both seemed surprised that we also use Facebook. They were quite eager that we sent them friend requests, I did enquire if there was such a thing as a village Facebook group. There wasn't, but there is now and it now has over 60 members. Mind you I haven't a clue who half of them are, but they do seem to know the village and like the photos which have been put up. We do try to post in both languages. Maybe not everything we post in Bulgarian is grammatically correct, but we do get plenty of Brownie points for trying. 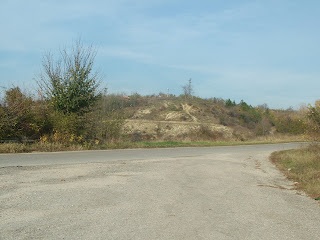 However, we have still managed to find time to get out in the fresh air and enjoy the countryside. The weather, up until today, has been glorious. Supposedly it has even been breaking records for temperatures in November. So we make the most of it when we can. Several of us decided that it would be nice to go out for a Sunday afternoon Ramble. We had often passed a track on our way into Polski Trambesh, and so we decided that would be a fine place to explore. Despite the fact that we haven't experienced any rain for a while it was surprising the amount of water which was still sat in some of the potholes. One of the good things about walking alongside a river is that the going is normally quite flat. Also rambling gives you the chance to see things that you might otherwise have missed, like dragonflies. Although Sod's Law did mean that by the time I had my camera sorted out they had buggered off. Unfortunately we also got to see several piles of building rubble spoiling the countryside. 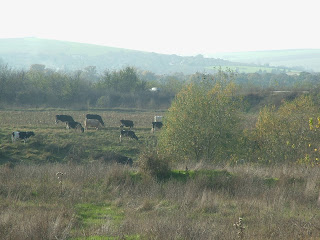 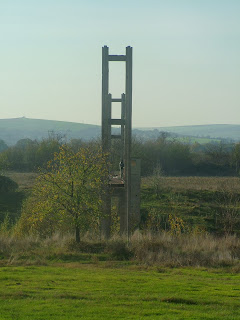 So to make up for it here is a photo of some cows, who were also enjoying the autumn sunshine. Fishing is definitely a popular pasttime over here, and you will often see them lining the river banks, or fishing from the various bridges. The people that is, not the cows as they seem more content just mooching along eating grass. I don't know if anyone else has noticed but herds seem to be getting bigger here. Not only cows, but also sheep and goats. 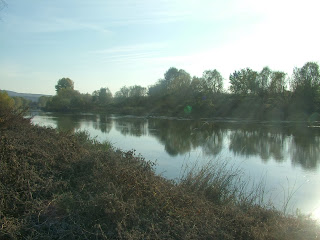 For the most part we were able to enjoy the silence, apart from three lads who passed us on a quad bike and a couple of trail bikes. Thankfully that noise was short lived, but we did see them when we drove home coming down from Orlovets. So there has to be a way through to there, maybe we will discover that another time. We were all quite happy to enjoy the peace and tranquility. The gnats and midges we could have done without, but they are to be expected along the rivers. Heading away from the river there was plenty of sun scorched yellow grasses climbing the gentle slopes of the hills. This surprised me as I didn't think that this summer had been as hot as last year. Mind you, for all I know this grass is possibly meant to look like this. 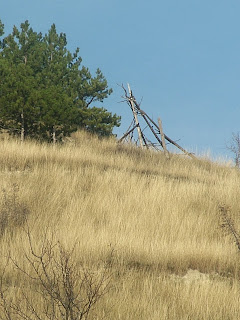 At the top of a hill there was a rather curious structure made from wood. Have American Indians decided to pitch their teepees in the middle of rural Bulgaria? Perhaps Giants have been using it as an easel. Or perhaps it is just something to do with hunting. Whatever its purpose none of us really felt like traipsing up to the top of the hill just to have a closer look. Idle speculation seemed a much better idea.

Once the sun started sinking the temperature soon begins to drop, so all to soon it was time to retrace our steps and head  back to where the cars had been parked. None of us had over exerted ourselves, but we all felt much better for having a little bit of gentle exercise in the fresh air. We enjoyed it so much that we have decided to have another similar ramble at the weekend. That is providing that the weather picks back up, which it is forecast to do. Temperatures in the 20s during November are not to be turned down, and although the shorts might have been packed away the t-shirts are still in use. Some of the things that we saw made me wonder if Mother Nature wasn't a bit confused by this warm weather. So is it Autumn, or have we bypassed Winter and gone straight into Spring? 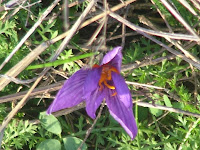 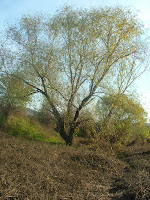 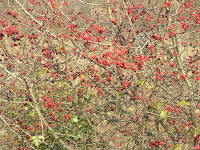 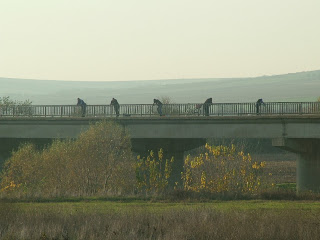 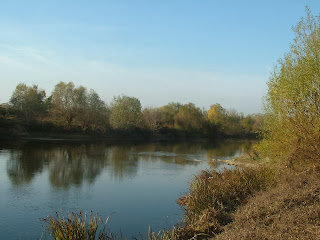