Is Winter Just Round The Corner? 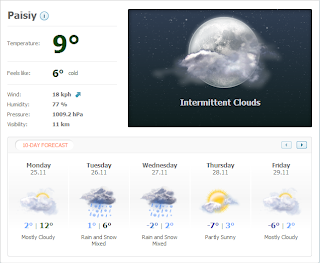 Well once again it has reached that time of year, and people are preparing for the onset of winter. It seems difficult to believe but the temperatures were in the 20s last week. Not so long back people were saying just how hot it was. Depending on who you give credence to, the coming winter is either meant to be the coldest on record or it is going to be freeze and thaw with the coldest weather in January. This will be our sixth Bulgarian winter and each one has been different. So far records have been broken, but that has been for the highest temperatures at this time of year. If you look at the forecast shown here you will notice a couple of things. The temperatures are expected to continue with their downward trend, and the dreaded s*** word is being mentioned from tomorrow onwards. The wind is now coming from a more northerly direction, and has a bit of a raw edge to it. We do know that something is going on with the weather as all three dogs and six cats are now indoors, which is surely a more reliable source of information. 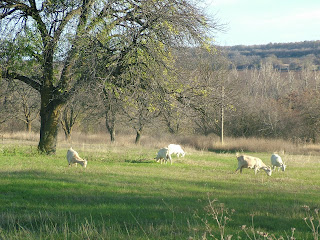 So maybe today is the final day of sunshine, but who can try and second guess what the weather has in store for us. It is like the other day we were enjoying bright blue skies and sunshine, we had to nip into Polski Trambesh to get something for Yolanta. The weather was fine until we got to the other side of Orlovets. Then it was like driving into a cloud, and with the dampness the temperature plummeted. Fortunately we have got into the habit of carrying jackets with us in the car wherever we go, we even had a spare for Yolanta. We got our bits and pieces and had a coffee, but on the trip back the cloud of doom had reached Vinograd. Later that same evening that same cloud had swallowed the hilltop, and it was as though everything was wrappedin damp cotton wool. No wonder the animals wanted the fire lit. We are not doing too bad so far this 'winter' we have only lit it 3 times, and the rest of the time we have just used the gas fires to take the chill off. 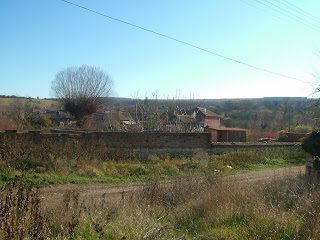 When the fog eventually clears we have enjoyed blue skies. These have enabled us to continue doing the final few jobs ready for winter. There has already been one 'fatality' that I have to report, and that is my splitting axe. After more than five years of faithful service the head is rather loose on the shaft. I am still able to use it but I have to keep stopping and wedging the head back in position. I tried sealing it in position by using glue from a hot glue gun, but that didn't work too well, so I will have to devise another method of securing the two parts together. I do have an emergency backup axe, just in case my running repairs keep on failing. One thing you do learn is to try and plan for various scenarios, and how you will attempt to overcome them. One thing to bear in mind is that the sunshine will return. 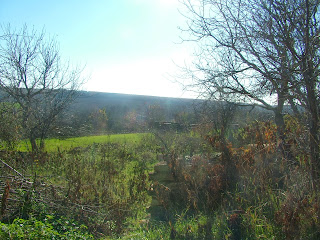 Today has been a baking day here, and we have made sausage rolls, cheese and bacon puffs, apple turnovers and an apple crumble. Most of these are destined for the freezer, now that they have been officially approved by the chief taster. In case of power cuts they can be brought out and placed on a cake cooling tray on top of the petchka and heated up that way. We also have a camping kettle which will also fit there so we can always have hot drinks. It is quite surprising what you can learn from other people and how they cope, all too often they are simple little things that you hadn't even considered. One thing to keep in mind is that the Bulgarians have survived much harder winters than we would have been used to, and they did so without many of the modern gadgets that we take for granted. So we can all learn from our neighbours, which is one of the best things about small village life, there is still a community spirit. So everyone seems to look out for everyone else. 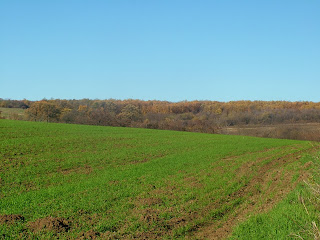 In the last week I have noticed that I feel more and more like hibernating, or is that curling up with a good book? Maybe it is just the thought of winter looming on the horizon, or the still lengthening night times. Often the night time sky is so clear that it seems as though a handful of diamond dust has been scattered on a black velvet cloth. Out in the middle of nowhere there is very little light pollution so it is easy to watch satellites and stars, it just gets a wee bit chilly. So for all of the readers of our blog I hope that your plans for winter are all on course. If you do have elderly neighbours, or those who are on their own, please keep an eye, or at least an ear, out for them. One of my next tasks is to make a seed cake for the local birds, I always used to buy them but this year I thought that I would attempt to make my own. Fortunately the cats have lost interest with trying to catch the pork skin that we have hanging up, so if I am lucky they will do the same with the seed cake. We have also said that during winter we will try teaching our nearest neighbours some English, they will also try to improve our basic Bulgarian, so wish us luck. 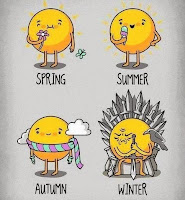 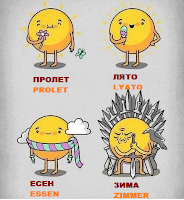 We have already posted these small posters on the village website to start gettng people used to the different languages. Whether it will help or not remains to be seen.