A Walk On The Wildside 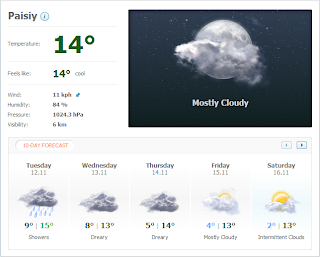 It is with deep regret that we have to announce the sad demise of Summer. Greatly loved by many, and will be sorely missed. In recent times Summer has defied the prognosis by experts and has lasted much longer than originally predicted.

Yes folks it seems as though the gypsy summer has finally come to an end. We shouldn't complain too much as it has lasted until nearly the middle of November. I dare say that many of us could only dream of such a thing happening in the UK. In the last few weeks I can only remember a couple of frosty mornings and they haven't been recent events either. I have to admit that we have had to resort to the gas fire a couple of times but we have resisted the temptation to light the wood burners. 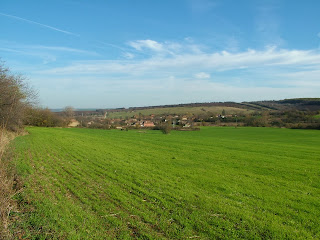 The past couple of days have been rather gloomy looking with grey skies and no real hint of sun. I think that the official term is 'claggy'. Even today it looked as though we had a touch of mist up on the hill. When we went into Gorna we discovered it to be the top of a cloud. We couldn't see down over the hill towards Polski, and it was getting thicker the lower we went. It made me quite glad that I had decided to go for my walk round the village on Sunday afternoon, as this would appear to be the final blue sky day for a while. I was going to head off towards one of the lakes, but as it was only me I changed my mind and decided to see where a farm track heading off towards some woods would take me. I even kept my ears open in case hunters were out and about, in which case I would have revised my plans again. Fortunately I didn't hear anything apart from the sounds of children playing somewhere in the village. 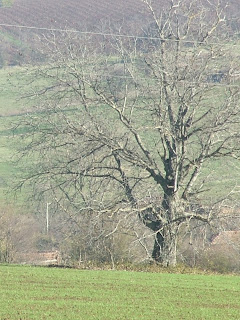 I was quite surprised to see that both bees and butterflies were still out and about. Maybe they were doing the same as me and enjoying the last of the summer sunshine. In one way I will be quite glad for the temperature to drop for a few days. Mainly due to the fact that I have at least one wasp nest up in the attic, and I am hoping that the cold will keep the wasps sleeping while I remove their nests. I don't really fancy trying to do what some people might think of as dance moves or a ninja workout in a restricted area under the roof. Maybe I will be lucky and they will have all have left home, although I somehow doubt that.

Anyway as I was wandering about it suddenly struck me that over the past few days all of the leaves seem to have been stripped from most of the trees. So everything is looking very autumnal, and getting themselves ready for winter. The various forecasts have been murmering about how this winter will be breaking records. They haven't actually said which records, but to my knowledge they have also said the same for the last few years. This will be winter number 6 for us, and all of the previous winters have been different. We can certainly say that it will be cold, there will be snow, but we can't say just how much or when, or even how long it will last. 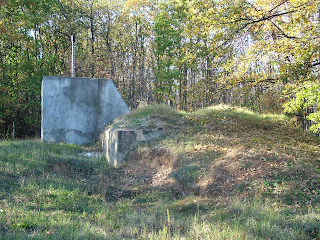 It is surprising the things that you stumble across when you are just out wandering around. This structure was at the edge of woodland overlooking the village. I have a feeling that it has something to do with the villages water supply as I have seen Nikolai the waterman returning from  this direction on occasion. Looking at the state of it though it seems to have been there for quite some time, but with the breather tubes it might be the villages emergency water reservoir. Although an old cold war bunker complex sounds just as likely. One day we might be able to find out more of the village's history, and others have also asked about this in the village's Facebook group. 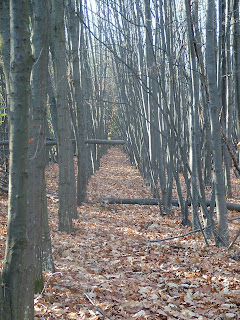 Even the other day I found out that some of the woods round the village were part of an experiment to find out which planting method, and which trees, returned the best yield. I think that looking at the regimented planting here I might have found one of the trial areas. Even though there have been some trees which have fallen over the years no one seems to have ventured there to acquire them. Maybe that might have something to do with the fact that it would be quite difficult to get a horse and cart up to that area. It was nice and peaceful up there in amongst the trees, with the only sound being my own feet moving through the dry leaves.

Round about this time the sun had started going down, and as the sun went down it was taking the temperature with it. So I headed out from between the trees and out onto the heathland and headed for home and a coffee. Others must have noticed the temperature change as I could see smoke starting to corkscrew up from quite a few chimneys. The good news is that Summer will return, we might have to wait a few months but it will be worth it. 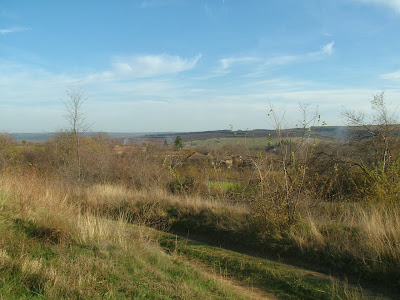