Some of you might remember the beginning of the year when some of us brave 'explorers' scaled the heights of the stone overlooking Gorna. This is the large ridge of rock which seems to stand as sentinel over the town, it is even floodlit at night. The last time that we made this journey we didn't have a camera between us. Well this week it was fine walking weather once the morning mist had burnt off, and armed with camera this time we decided that we were going once again climb the stone. We parked up and began our ascent, at least this time we had more of an idea about where we were going. It is surprising just how many Bulgarians there are also walking up and down the road, even with it being midweek. Apparently it gets even busier at the weekend. We decided that we were going to make the ascent without oxygen or climbing aids.

Initially the going was easy, and then we got off the road and started heading off between the trees. All was going well at this stage, and no one was feeling the effects of oxygen deprivation as we began our ascent. We did express our sympathy for whoever had gone before us with their pots of paint. The first time that I had seen these markings I thought they might have been poor attempts at Spanish graffiti, but the Indian pathfinder had done quite a good job. Sometimes it might have been better if some of the marker points had been closer together. It was nice to see some good size clumps of wild cyclamen poking up through the blanket of fallen leaves. Even though we haven't had rain for a while the mist and fog had left some areas a little bit slick underfoot, which could catch out the unwary.

For a while we even had a Bulgarian couple following us, but that was short lived. maybe they felt that we didn't have a clue where we were going. We just had to follow the trail left by El Painto. Unfortunately they caught up with us just at the time when we had found a wide gap in the trail markings. With a little bit of perseverence we soon picked up the trail again and we continuedour assault on the big rock. It was surprising to see some of the big gaps under and between some of the rocks. They were big enough for bears to hide, or from observing the contents left in them the local wine and beer appreciation societies had recently held meetings there. It really is a shame that such areas of natural beauty are spoiled by rubbish being left strewn about.

We continued our climb up through the trees, hopping from stone to boulder, and boulder to stone. It really does pay to wear some proper footwear when you are making these ascents. We could notice that the trees were getting less and less, and the sun was getting hotter. Beneath my backpack I was starting to sweat more than the last chicken in Colonel Sanders back garden in Kentucky. We burst through from the trees into an area of bushes and scrub. Fortunately it was a bit of a convenient passing area as an old man was coming down with his newspaper. So we moved to one side to let him pass, and then we continued ourselves. Even Chris Bonnington would have been proud of us as we reached the summit.

There are some stunning views looking out over the town of Gorna. The Bulgarian couple also appeared at the top at the same time, they didn't look as sweaty or as disshevelled as we were, so they must have found an easy way up. Unfortunately with the farmers burning the stubble off in the fields there is a bit of a smoggy haze which seems to be a permanent feature for this time of year. This view makes it all worth while, and on a really clear day it is amazing the number of villages which you can actually spot and name. The air was so still and quiet that we could hear the siren of an emergency vehicle in the distance. We think that it might have been between Yantra and Pravda but we couldn't be certain. I had carted the binoculars up there but no one could really be bothered to use them. It was enough to just be up there and looking out over the land below.

Unfortunately we had another appointment so it seemed that no sooner were we at the top of the stone then it was time to start on our way down. This actually proved more problematic, as there could be small twigs hiding under the fallen leaves. Fortunately no one fell into the wine appreciation areas, and everyone made it down unscathed. All joking aside for anyone else thinkingabout attempting this climb, on a dry day it is really worthwhile. On a wet day perhaps it might not be so good. Always remember that a good pair of boots or walking trainers are much better than flip flops. Most of all don't forget to take a camera with you to record those views. This time of year is wonderful, especially with the autumn colours. 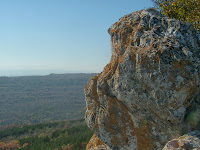 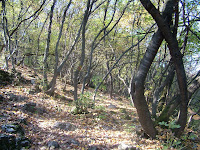 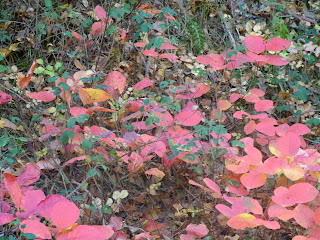