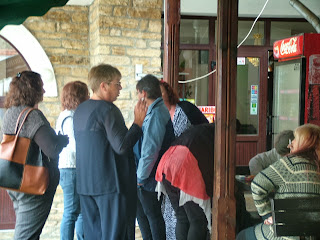 As some of you might be aware there are various ExPat ladies groups throughout Bulgaria. The majority seem to have their own group pages on facebook, and one such group are the LaLa's. I am told that they are not limited to just ExPats, but are quite pleased that they also have Bulgarians within their number. Every so often these ladies groups will meet up for lunches. Yesterday saw such an occasion for the LaLa's as they held a lunch at the Hotel Palmira in Arbanasi. As far as I am aware this is the first time that they have ventured into a hotel for one of these occasions. The ladies came from far and wide, and it was an ideal opportunity for them to actually put faces to the names that they have previously been chatting with. Some stayed in the hotel overnight and some were hosted by some of the local ladies. 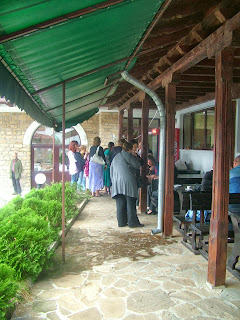 We played hosts to Jenny, so our Sunday started bright and early as we had to pick her up in VT. So there we were waiting at the bus station, a bus went and nothing else happened, nothing else came in. We gave it a further 10 minutes but there were no signs of any other activity, so we thought we might actually be at the wrong bus station. So we went on to the next one which seemed more promising as there was a lot more activity. People were sat there with cases, buses were coming and going, however not the bus we wanted.  So I had to go inside the bus station and try to find someone who could tell us if we were in the right place, if not where we should be. It turned out we were at bus station south and we should have been at bus station west. So onto our third bus station and sure enough there was Jenny waiting for us. So after our tour of the bus stations of VT I was definitely in need of coffee. Over coffee we had a decision to make, should we stay in VT for a few hours and meet the next couple at the bus station or did we go home and then come back in a couple of hours later. We decided that it was possibly bbest staying where we were given the problems we had trying to guess the right bus station earlier, why a city like VT can't have a single bus station is beyond me. 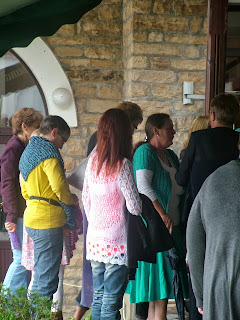 Anyway we eventually managed to pick everyone up who needed picking up. As we have dogs and cats to feed we thought that we would go via home, I could feed the animals, Jenny could drop her luggage off, coffee could be drunk and the facilities could be used if necessary. Once all of that was done we could then head over to Mrs M for the next stage of our journey and lunch. We were spoilt as there was a full roast meal waiting for us including roast lamb. It was a great evening spent catching up and having a bit of a laugh, the only downside being that we had to drive home in the wet and the dark. We eventually got to bed about 1am. Then it seemed as though it was up again as soon as my head touched the pillow. Everyone fed and watered then it was over to Polski Trambesh to act as guide getting those from that way to the hotel in Arbanassi. It might seem a bit of a weird and convoluted route but we managed it all. People were turning up at the hotel and luckily we were going to be eating in the dining room as it was a persistant drizzle with low flying cloud outside. 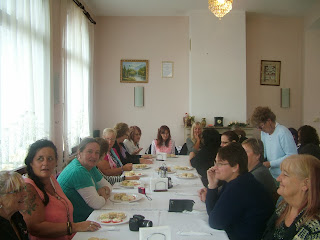 There were even 4 of us brave men who had decided to brave the occasion, and not one of us had a posh frock on, fortunately. We did have our own table out of the way. It was closer to the kitchen, which meant that we got served before the ladies did. The meal was okay, even though it wasn't what was actually arranged when the venue was booked. There only seemed to be one waitress doing all of the work, there were other staff there but I think she was the only one who spoke English. In the end everyone was fed and all in all the lunch went off without any major snags. There was certainly a lot of chattering coming from the tables with all of the ladies, so I think that everyone enjoyed themselves. Even when the lunch had finished and people had started to drift away there were still about eight who stayed behind nattering. 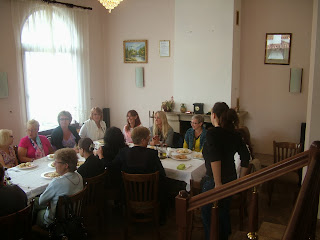 To my mind it was definitely a good do, and it did give me a chance to put some more faces to names. I am also pleased to welcome Sarah as one of the new followers to the blog. Even once we had left and returned home to sort animals out we still had another trip over to Mrs M's to make for a buffet and more talking and laughter. The weather hadn't improved at all, and even the drive home was wet, even when I got stopped for a document check near Polski. I guess that with the weather they wanted to feel like they were doing something useful. I think that I got to bed about 2am this morning. Maybe I am getting too old for all of this party lifestyle, and I am becoming a daft old fart. However, there is much to be said with the old saying, "That you can't expect to soar with the Eagles if you have been out hooting with the Owls."

So ladies a very big thank you to all who braved the weather and managed to attend, and even for letting us men join in as well. I don't know if anyone actually took their swimming cozzies with them, but I didn't notice anyone brave enough to actually take to the water. Although it was touch and go when someone almost dared someone else to take the plunge.