Today started off a little bit cooler, and at times it was quite overcast. So it was decided that it was high time that a lot of the produce out of the garden ought to be sorted out ready for later in the year. Yesterday we had also been round the fruit and veg market in Gorna Oriahovitsa, getting other bits and pieces. So while Net was sorting bits and pieces out, I was going round doing the housework. Now I still might not be qualified to drive the washing machine, but at least I can hang the washing out on the line, push a broom round and wield a mop and bucket. The Royal Navy's school of cleaning has stood me in good stead for these kinds of situations.

Today has also been one of various trials and tribulations. Last night we noticed a problem with the satellite system, the picture would freeze periodically and there was no sound at all. So today armed with my client number I phoned them up to try a find a solution. I dialled the number and went through the normal press 1 for English etc. When I had finished pressing buttons, to narrow down the selection, I finally got to speak to someone. Could they speak English, no. My Bulgarian is nowhere near good enough to even begin to try and explain the problem. Eventually I was put through to an English speaker, who decided that I needed to speak to their technical people. So I get put through to them and because I didn't speak enough Bulgarian they hung up on me. Five times this happened, and to say that I was not happy would be a slight understatement. To think that this is a service that we are paying for, maybe when I pay the bill next week I might be tempted to mention my level of satisfaction. In the end we solved the problem ourselves so who needs them anyway.

Whenever fruit and vegetables are prepared, there are always plenty of trimmings and off cuts. At this time of year we don't really want them hanging about in the kitchen bin. So we placed them all in a bag, which I disposed of in the wheelie bin outside. Half an hour later there was more to get rid off, so I took that out as well. In the space of that half an hour the skip divers had been and had a rummage through our bin. Now I wouldn't mind too much if they actually put stuff that they had taken out instead of leaving it dumped beside the wheelie bin for the wildlife to play with. If it continues anymore I shall have to resort to my idea which cured it last time, I shall deposit my patrol bag in there after cleaning up from the three dogs. That will give them a 'nice' surprise.

As previously mentioned today was a kitchen day, and that also included me helping. Salsas have been made, as has Mango Chutney and Courgette Relish. Net had a slight problem with the chillies. The oil that they produce got on her hands, and was getting hotter and hotter. Now normally gloves would have been worn, but we forgot to pick some up yesterday. So it was a case of trying to look up how to take the burning sensation away, while making sure that nothing caught as they were cooked up. I was amazed at the number of 'cures' that the internet throws up. Even my immediate answers came up. So there was Net's hand thrust into a pot of yoghurt. We didn't have any natural yoghurt, so it was a peach one. That didn't work, and neither did milk. Other cures involved salt, sugar, slices of cucumber, olive oil and vodka. They were all about as much use as each other, or as is commonly known bugger all use. Maybe the combination of trial and error eventually helped, or it might have been Net having her hands in the pool for ten minutes at a time.

My job today, or one of them, was the sausage rolls. Now I realise that the picture shows that I might not have made very many. However, these are the ones that I didn't actually eat ...... yet. I don't know what it is about sausage rolls, but there seems to be an unwritten law that you have to start eating them as soon as they come out of the oven. Even though I am not totally helpless in the kitchen, Net seems to think that I surround myself with chaos. Just because it looked as though I had gone three rounds with the Pillsbury Dough Boy, and I had won as I had knocked the stuffing out of him. It was quite surprising where flour hadn't managed to end up. Other pastry items included three apple pies. For some strange reason I didn't really feel much like my tea tonight. Maybe there wasn't much room amongst the sausage rolls, apple pie and cream.

Even though the day started cooler, the heat didn't take too long to start building. It must have been shortly after we had actually started cooking. So we had the heat from outside added to the heat in the kitchen. Hardly surprising that we ended up feeling quite so knackered. I am quite pleased that we did it today though, as looking at the forecast it is going to be getting maybe a little bit warmer. Thank heavens for the pool, as I imagine that we will be in and out as often as a fiddler's elbow. 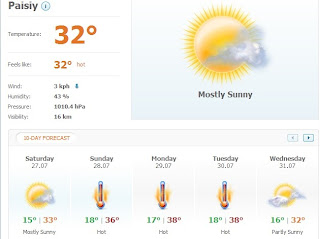 The kitchen is now back to normal, and there is no longer any sign that I might have been a little heavy handed with the flour. The rubbish is still in the wheelie bin outside, and the satellite system is still working. Best of all, Net's hands have stopped tingling from the chilli oil. The sausage rolls are most definitely edible, and the apple pies are disappearing, maybe my waistline will soon be increasing. I wonder where I can buy some Ex-Pando trousers.
Posted by Unknown at 21:01