Some of you might remember a statement that I made a few posts ago. The one about how the insects in your garden if not trying to eat your plants will be trying to eat you. So there I was out cutting the grass when all of a sudden I felt something bite me on the shoulder. The only thing there was a Ladybird. It turns out that these little buggers do actually bite. I have noticed that there seems to be a lot of them this year, and on checking the roses, there doesn't seem to be that many aphids about. So maybe either these ladybird needs to go to Specsavers, or I have started to look like a great big greenfly. I am hoping that it is the first of these options, otherwise I might have a few snags that I was otherwise unaware of.

As you might imagine there are all manner of insects lurking in the average Bulgarian garden. Some look quite scarey, but these are the peaceful ones. It is the ordainary looking ones that often trying biting lumps out of you. There is a fly , that seems immune to all known fly sprays,whose sole purpose on Earth is to bite people. The closest that I have come to it before now was something called the Blandford Fly. To try and control these bugs and beasties we have got a couple of things from the Agro Apteka. Firstly we got something called Fedona, which can be liberally sprayed round. It is recommended by the World Health Organisation, and is often used out in Africa. A small vial is mixed with 6 litres of water, and that will last you all through the summer. It is also pet friendly, although I am not sure about using it round chickens and such like. We have also got something similar, called Icon 10 which is meant to control the Mozzies.

Then there are the Grasshoppers. These also bite, but luckily we have cats who like hunting them and then eating them. It is not unusual to find bits of Grasshopper leg on the step by the back door. I am guessing that there is not a great deal of meat on the legs, unlike a chicken drumstick. Occasionally we also get Praying Mantises in the garden, but I have only seen male ones so far this year, and not the larger females.

The Fireflies have either disappeared or their batteries have run out as I don't notice them flitting round the garden of an evening now. I am expecting the big Hawk Moths to arrive soon, although as I remember there were not that many about last year. These are something else that the cats love to chase, but unfortunately they damage some of the plants as the leap around trying to catch these large moths.

Some of the larger beetles are already out and about. There are Stag Beetles, which many in the UK will be familiar with. There are also Rhino Beetles as well, unfortunetely I don't have any photos of a complete one as the cats seem to think that these form part of their diet, anyone would think that we don't feed them. Ignore what Mr Cat says, as he feels that he should live on a diet of Cheese, Ham, Chicken and Fish.
There are plenty of different species of Spider to be found over here. The good news, for those who are a bit worried about such things, is that they are not that big. Although if you do have a bit of a phobia, I am guessing that any spider can appear much larger than it really is.

Quite often you will find that people in the villages keep bees. It is often said that if you suffer with hay fever then if you take locally produced honey this helps to build up the bodies immunity. I know that Dencho, round the back of us, keeps bees as we keep fishing them out of the pool. The little sids are quite ungrateful, as a couple of times we have been stung by them. I can understand people keeping bees, as they are useful for the honey and the wax, and they also help to polinate the crops. With the number of wasps and hornets about, do people also keep these in hives? Last year our Boxer, Fenny, decided to sample a Hornet just to see what it tasted like. Half of his jowls swelled up, and he ended up looking like the Elephant Man's dog, he wasn't too bad after some anti histamine. Surprisingly he doesn't seem that keen on a repeat performance this year.

So as you can see there are quite a few insects that inhabit the gardens, and there are still plenty that have yet to be photographed by me. This will also include the various different species of Ants. I have noticed that the smaller something is the worse it's bite seems to be. Whenever I am watering the garden of an evening, I often get bitten, but on looking there never appears to be anything there. maybe they are related to the famous North American Nosee'ums 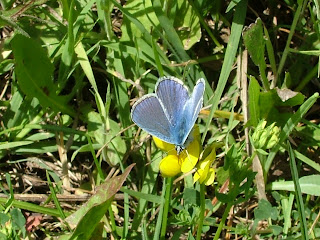 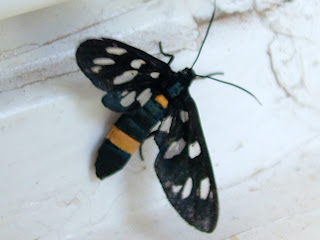 Before I forget I would just like to welcome a couple of Ladies who are now officially following the blogs. So a very warm welcome to both Net and Chris. The good news is that there is still plenty of room should anyone else feel inclined to follow the blog.