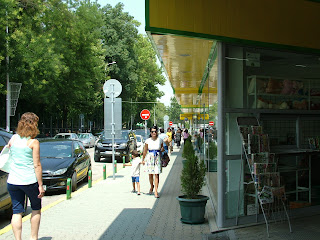 As things have been fairly busy here recently, when we were invited out for a day trip we jumped at the chance. Especially when it was to a city that we had never been to before. Yesterday was spent gardening and cutting the grass, mainly so that we didn't feel guilty today. So this morning we left home and went over to see that very nice Mrs M. You will understand why I think that she is such a wonderful person when I tell you that we had coffee and home made fruit cake as soon as we got there. As soon as we were ready it was time to head off to Pleven.

As usual whenever we head for somewhere different I take my camera with me. The journey from Mrs M's is a lot shorter than it would be going direct from here. As it wasn't me doing the driving it gave me the opportunity to take in the surroundings. One of the things that immeadiately struck me was that the roads are in much better condition than they are round our way, and they have possibly more heavy lorries on the road. Not long after we passed a small airport we arrived in Pleven itself. The first order of the day was to find somewhere to park, which actually proved easier than any of us imagined. 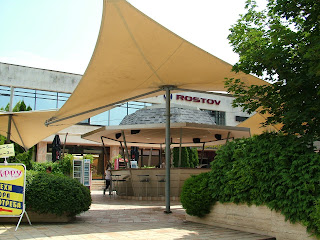 The next priority was to get something to drink, as it was getting a bit warm. We used a cafe attatched to the Hotel Rostov, two of us were quite happy with our cokes with ice and slice, but Net's Cappucino was a bit of a disappointment. It was one of those strange packet concoctions. Once suitably refreshed it was time to take a slow wander wherever our feet fancied taking us. Many who live out here now will agree that the pace of life is so much slower, but one good thing with it being that much slower is that you do get to notice so much more. You also do not get bumped and jostled, and people do not seem to be stuck in their own little bubbles. Just at the end of some of the main streets, right next to one of the main shopping malls, there is a very nicely laid out park. There were wide paths to stroll along, plenty of trees to provide shade, there are plenty of fountains providing that beautiful sound of running water. Best of all there are plenty of places to sit and relax, and watch the world go by as we let our lunches digest. Another thing that I noticed was that there wasn't any rubbish littering the area, and as a city it doesn't have that grubby, down at heel look that so many seem to have. Whilst there I did hear my first siren in a long while, now as to whether it was the Police, an Ambulance or a Fire Engine I couldn't say, but it did seem to reaffirm our sound reasons for not wanting to live in a city. 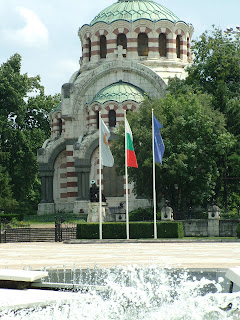 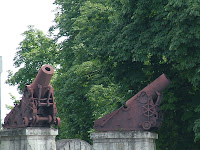 There is much to be said for slowly sauntering round, while eating tubs of ice cream. For any ice cream afficionados out there, I would like to suggest that both the Raffy Lemon and Strawberry flavours are worth more than a taste this season. The Bubblegum flavour was a bit of a disappointment though, even though I did manage to finish it. Holding a tub of ice cream does not make it easy to photograph things though. I am guessing that Pleven was somewhere of military importance of there were plenty of old cannon, and what seemed to be war memorials dotted about. 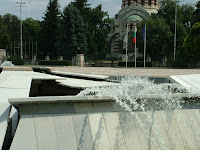 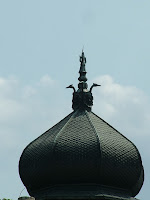 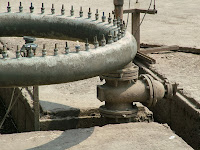 My abiding memory will be fountains though, as there certainly seemed to be plenty. They have so many there that they don't even have them all running. The empty ones looking like something that has been cobbled together from a WWI submarine. It does pay to keep your eyes open when you are visiting a strange city as there is no telling what you might spot. Don't just look in front of you, but up, down and side to side. It was whilst looking up that I noticed what seem to be dragon heads. They immediately made me think of Viking Longships, but I don't know if the Vikings ever made it down to this part of the world. There were a crowd of people stood around under the shade of conker trees watching a couple of games of chess unfold. I wonder if they would have been so interested if they had been playing that well known spectator sport of Uckers. There were also plenty of statues dotted around. Considering that it was a work day there were still plenty of people out enjoying the sunshine. 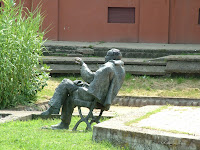 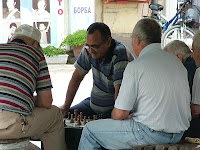 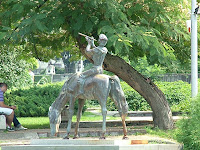 All too soon our visit had to end, but Net did manage to find an art shop and so she was able to replenish some much needed art supplies. The next task that we had to tackle was how to get back out of the city centre. Even that seemed to be problem free, well ok there might have been a bit of guesswork involved. Soon we were recognising some of the things that Mrs M had pointed out on the way in. Our day was not quite over, as once we had got back to Mrs M's we went over the road to visit her lovely neighbour Lily. As luck would have it, her son Ivan was also there. Despite Lily not knowing that her son was going to be visiting, or that we would be dropping in from across the road the previous evening Lily had baked a cake. Now that is what I call a successful day, very good company, two different cakes, ice cream, visiting somewhere different and people watching. 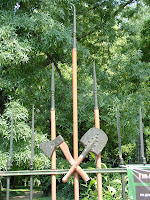 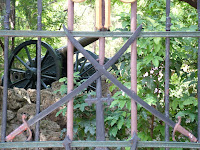 Would we go back and see more of Pleven? Yes please 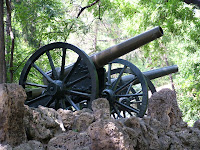 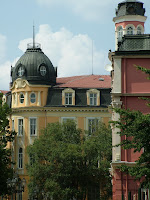