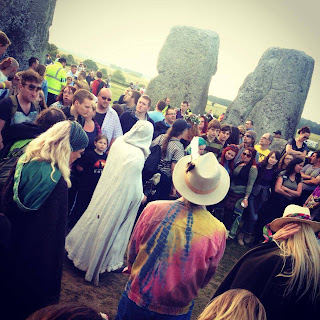 As many of you will know yesterday was the Summer Solstice, or the longest day of the year. I have included this picture from Stonehenge, as i do not know if Bulgaria has any similar celebrations at this time of year. English Heritage open up the stone circle on a few occasions each year, I always thought that it was for the Druids, but looking at this photo it seems to be all and sundry there. Still having said that I can remember going there with my Grandparents on many an occasion before it was all fenced off.

We have been fairly busy since I last updated the Blog. We were due to have people over for a bite to eat last Sunday, but with the last few rain storms the grass has been growing like nobodies business. So on the Saturday it out with the lawn mower again and try to make the lawns look slightly presentable. I managed to cut three out of the four before it started spitting and spotting with rain. 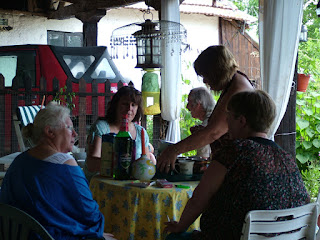 We had told people that if they fancied a dip in the pool they were more than welcome, but to bring their swimming togs. As it had taken me so long getting the pool clean we had put the solar cover on to prevent anymore leaves and twigs being blown into it. Once people had eaten i think that swimming was the last thing on anyone's mind. However, hands were stuck under the cover and comments were passed on how warm the water was. It was just like bath water., or as Clive put it like the water in the Caribbean. The cover remained on for the next couple of days as we did have some more rain during the nights, although nothing like the quantity that we have had recently. 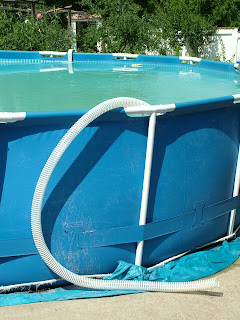 When we took the solar cover off we were in for a bit of a surprise. Not only was the greenish tinge back to the water, but due to the heat of the water the algae had been having a field day. The good news is that the pool is now back how it shoould be, even though it took another two days cleaning. There were plenty of flying ants that had crash landed in the pool and they must have got themselves part boiled. I ended up with so many stuck on me whilst doing the cleaning duties that I must have looked like a human Garibaldi biscuit. It has been worthwhile as it has been in use these last few days as the temperatures have been somewhat warm to say the least. So a cautionary tale, the solar panels are great at warming the water, but do not leave them on constantly.  It is surprising just how effective blue bubble wrap can be. All throughout the cleaning operation I have been under cat supervision. The only one who hasn't sat on the steps and checked on my progress has been Mr Cat, but he has never been that far away. 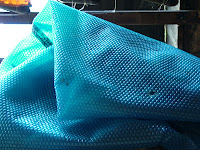 With the hotter temperatures have come the various insects. The other year we learnt about a great thing to control flies. It is something called Fedona and it's available at any Agro Apteka. It is the stuff that the World Health Organisation recommend for use out in Africa. It is pet safe, and supposedly you can even use it on your kitchen counter tops, although we have never actually tried that. It does keep an awful lot of the flies at bay, unfortunately the ones that are left all seem to be the biting ones. That reminds me about something we were told when we first moved out here. The insects that don't eat your plants and vegetables, will try to eat you. It does seem to be true, as we have both been eaten alive by invisible insects. You can feel the little buggers bite, but when you look there is nothing there.

We have also had a trip into Svishtov with friends. My task was to try and get a couple of pictorial dictionaries. I wouldn't have thought that would have been too difficult, but I was offered anything but what I wanted. In the end I have ordered them from the book shop in Gorna where I had bought my copy. I don't know why but no-one in Svishtov had the gumption to say that they would order
them online from their suppliers. Clive had checked on Amazon, and the price was over £40. Slightly different to the 29.90 Leva that I had paid for mine. Maybe people might think that it is a lot of fuss over a dictionary, but this is the most comprehensive one that I have found, and quite easy to use. 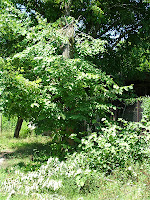 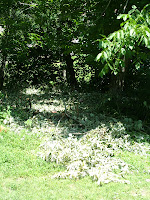 Many living in the country will have noticed the local Gypsy population ravaging the Linden trees. They call them Lippa or something like that, and they are after the flowers or blossom. They dry it out and use it to make tea. I don't really have a problem with this, but what I do have a problem with is the destruction that they cause in doing so. They also just dump the branches where they have left them, and the only ones who I have seen tidy up after themselves are Ami and Said over the road from us. These poor trees have got broken, and partially broken branches, and these Gypsies just don't seem to care. I wonder what they are going to do next year if these trees do't make it through the winter. At a guess they will probably cut them down and try to sell it to a foreigner for firewood. 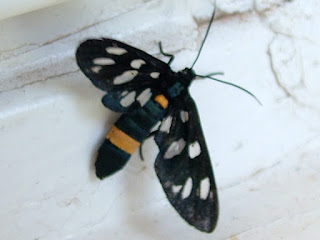 Now that the rains seem to have left us for a while I have noticed an increase in the number of butterflies and moths in the garden. The ones pictured opposite seem to be in abundance, and if Merlin is anything to go by should form part of any cat's staple diet. He lies in wait in amongst the shrubbery and just pounces on them. I guess that it gives him plenty of exercise and entertainment, and stops him trying to pick fights with the other cats.

Well I think that has caught you up with everything, so I am off to do some more stuff in the garden, and when I get too hot and sticky I can be found in the pool. 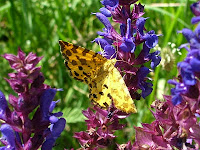 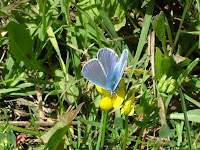 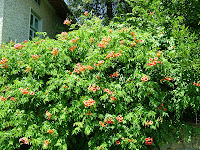 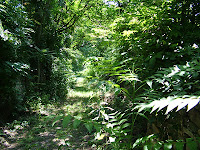