Now That's What I Call A Storm

Yesterday we were out and about, even though the National Institute for Meteorology and Hydrology had placed this area on a code yellow warning for rain and thunderstorms. That wasn't so bad, as other areas were placed on code Orange. So there we were, over at our friend's house and the air was getting stickier and stickier. The air was very calm and there were a few clouds scudding about in the blue sky. My head started to pound as the pressure built steadily throughout the day. As time wore on the clouds were gathering. There didn't really seem to be any direction to them, as they were coming in from all directions. Maybe someone was demonstrating their cloud magnet, that they had bought at Pavlikeni market. 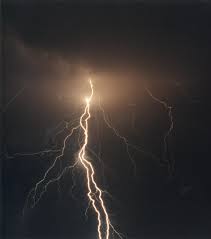 The sky was getting greyer and greyer as we sat down for something to eat. So I had one eye on what was happening outside the window and the other on my plate. Well it was proper sausages, fried onions, new potatoes, veg and gravy, so who could blame me for my attention being divided. At one point it looked as though the weather was going to by-pass us, which seemed like a good time to have another coffee. It did still look grey out of the window, and then the first few drops of rain started to fall. You could almost hear go splat as they hit the ground, as they were that big and heavy. We decided that was a good cue to be leaving. Getting in the car we could see just how dark the sky was getting again. We had only just started up and turned round when the rain began to get heavier. Going through the village the wipers were not on constantly, we saved that treat for when we got out on the main road. As by then the rain was coming down like stair rods, what a great time to find out that the door seal on the driver's door has developed a leak. Despite there being a new law here in Bulgaria that you are meant to drive with lights on at all times, there were still idiots who thought that they knew better. Some of them were even overtaking, I decided that we would cut across country rather than stay on the main road.

So we got halfway through a village and the roads started to dry out, by the time we got to the other side the roads were completely dry. If we didn't check the mirrors we wouldn't have guessed that there was a storm about, but the sky that we could see in the mirror was blacker than a witch's hat. I just made it over the brow of the hill before the rain caught up with us again. It was coming from two different directions and the wind was picking up. Going down the other side of the hill the lightning started, and this was proper light up the world fork lightning, and the thunder was crashing around. The windscreen wipers were only just copiing with the quantity of rain, even on the fastest setting. 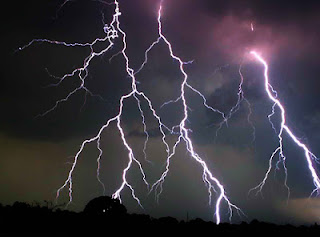 If I had been speeding I would have been worried about the flashes coming from every which direction. They were quite regular, and Net even saw a pink one. You couldn't speed even if you wanted too, due to the amount of surface water. Those who have driven on Bulgarian roads will know what I mean, as pot holes like to lurk hidden by puddles. The last thing that you would want to do is stop and change a wheel in weather like that. Fortunately by the time we had got to Polski Trambesh the worst was over. So all we had to do was head up into the hills and we were home. We were heading uphill and there were streams of water heading downhill, some were clear and some were muddy from the fields. As we started the final leg of the journey we noticed that the road was steaming in places. Near some fishing lakes there appeared to be a cloud hovering about twenty feet off of the ground. 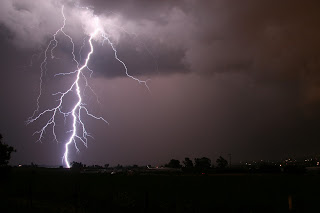 Now on that road there are some dips, and the rain water had collected in them. Thankfully we were in the 4x4, so the ground clearance is quite high. Even so we ended up creating enough of a bow wave to go over the top of us. Some of these 'pools' were full of very watery mud, not very good when it gets on the windscreen. Some was brown mud and some was red mud. Halfway though these dips we passed a motorcycle going the other way, we both thought surely not, but he didn't turn round and follow us out. He had already managed to get through a few by the time that he had passed us. By the time that we got home it seemed as though the worst was over, but even through the night the storm rumbled backwards and forwards. Going out to pay the bills today I was surprised by just how little damage there was. In other areas of the country there was a fatality due to the storm. These people had taken shelter under a tree, which unfortunately was struck by lightning.

Before anyone asks the photos to this blog are all ones that I have downloaded from the internet. I don't know about anyone else but I have never had much luck with taking photos during a storm, I can never get that perfect, or even near decent, shot. I can pick my spot, and focus on it, wait for that right moment and the thunder crashes, I jump like a startled rabbit and the shot has been missed once again.
Posted by Unknown at 18:21