Does The World Know Or Care About What Is Happening In Bulgaria?

Today I was asked to repost a blog, I have tried but for some reason it doesn't seem to like going onto Blogger. So the next best thing is to copy and paste it in its entirity. The initial words are not mine but from another blogger, please take the time to read and forward it on. Thank you 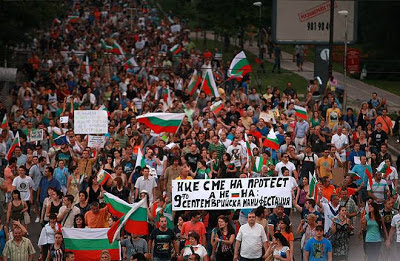 Okay for now the protests in Bulgaria are unlike the others going on around the world. And the only difference is that our protests are still peaceful. And that’s thanks to the police, who showed solidarity. In that moment the citizens showed the police love. We take care of them by bringing them water, some even share hugs or get flowers. But for how long?

The problem is that noone is listening to the people. There isn’t any change after almost 10 days of protests. Nothing. And the world is still silent about all of this. All the big news channels or sites share only a little articles about what’s happening. Until Sofia’s in blood and fire like Taksim. Is that what the world wants?

The protests managed to keep it creative and peaceful for now. Actually it’s like a big party on the streets of Sofia. There are kids and parents and grandparents. There is love. There is creativity. There is tolerance. We want to keep it that way, but we need to be heard, we need change. Help us spread the word. Help us show the world that #BuglariaExists

What can you do? Reblog this. Share it with your friends on Twitter and Facebook. Tell your family what’s going on. Just tell someone. You can help us. Oh and use the #ДАНСwithme hashtag. You have no idea how much we need to be heard and you can make that happen. Just take a moment and help a nation. 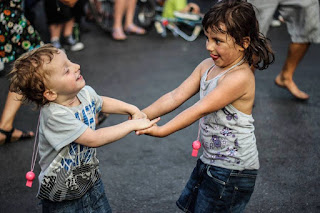 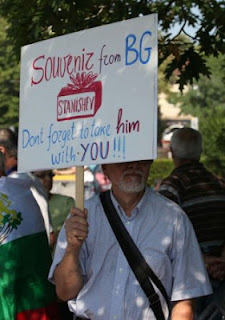 Even today there have been more protests held in the centre of Sofia. Thousands have gathered to protest against the new Prime Minister, Plamen Oresharski, and his new cabinet. All of this in foul weather. Prince Edward and his wife, Sophie the Countess of Wessex, are also in Sofia today at the invitation of the President, Rosen Plevneliev. Do you think that the powers that be will let a tenth day of protest overshadow this visit. As it has hardly been reported outside of the country I am guessing that the Royals know little about the situation. I would imagine that it does pose some problems for their security detail though.

Many people are puzzled by some of the appointments to positions of power, that the new Prime Minister has made. One appointment has since been overturned. This was the appointment of Delyan Peevski  as Chair of the State's Agency for National Security. By all accounts he is a bit of a dodgy media mogul, so nothing that hasn't happened in other countries. Even Parliament's decision to overturn this appointment hasn't appeased the protestors, and they are still calling for the resignation of the new Prime Minister, and that of the whole government. He was only appointed into power on May 29th, so he has wasted no time in distancing himself from the man on the street. This is Bulgaria's 42nd elected Parliament, although how long it will last is anybody's guess. 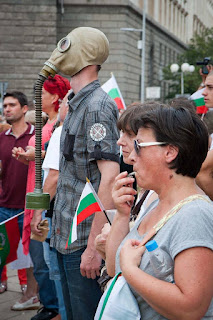 Many are now critical of Bulgaria's election system, claiming that it is long due for an overhaul. Hopefully in time a future government will be more in tune with what the people actually want. I am guessing that the dumped completed ballot papers being found without them having been counted will not have helped matters. At the moment after the last elections there are representatives of just four parties holding seats in the new Parliament. The protestors are also pointing their fingers at percieved shady goings on between politicians, large corporate businesses and those who aren't averse at bending, if not breaking the law. There is one problem looming should the people get their wishes and the government resigns, and that is who will take over? 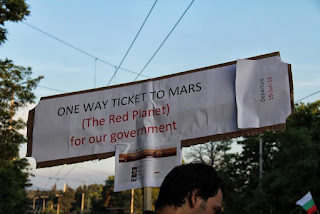 Even the Prime Minister's first trip to Brussels couldn't keep him out of the sights of the protestors. They were there in Brussels to 'welcome' him. Slowly the protests have been gathering momentum, and these are no longer confined to just Bulgarian cities. Even the EU Commission President, Jose Manuel Barroso has expressed concerns  about the goings on in Bulgaria. What many politicians seem to be forgetting is that the EU has been closely monitoring Bulgaria's performance in certain areas. The Commission President is also quoted as saying, "Some of the recent developments in Bulgaria were not good, and they raised concerns not only in Bulgarian society but among the European partners of Bulgaria. The candidates chosen should be based on merit, and they should have the highest standards of integrity."  I am guessing that the final sentence is in reference to the appointment of Delyan Peevski. 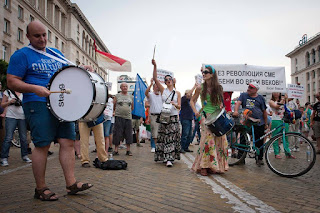 So does this mean that the cat is out of the bag, and that the protests, although peaceful, will be considered newsworthy. Or will people still be focussing on the likes of Nigel Farage and his jingoistic posturing. take a look Mr Farage, the average Bulgarian does not want to go to the UK and sponge off of the social security system. They are a proud nation of people who want what is best for their country. So please do not mistake honest hardworking Bulgarians for the gypsies with Bulgarian passports