The Day Of The Triffids

I would like to take this opportunity to welcome the new followers to this blog, thank you for taking the time to read them, and I hope that you enjoy reading them as much as I enjoy writing them. Hopefully you will remember me writing about the crafty ladies last week. Well this week we hosted them here at our home, so along with the wonderful weather it has been time for getting things presentable. This included one of my favourite jobs, cutting the grass.

One thing struck me as I was pushing the lawn mower backwards and forwards, and that was that I really ought to plug it in. Seriously though, grass cutting is quite tedious so my mind does tend to wander, and this time it went back to my school days. Or more precisely English Literature, and John Wyndham's 'The Day Of The Triffids'. The ground is that fertile here, that you could probably push a stick into the ground and it would take root. It definitely seems as though the Dandelions like it here, turn your back and you have loads of them. You cut them down and back they come, it is almost as if they are mocking you. The yellow flowery bits are not too bad but we can do without the Dandelion clocks that come with them.

Fortunately it is not only the Dandelions that thrive here. Since  we have arrived we have had to take out some of the old , and dangerous, fruit trees from our garden. These have been replaced with new stock, at a rate of about 2 for 1. A lot of these have been planted in what I think of as the Cadbury's orchard, as they are all either fruit or nut. This year the trees have been plastered in blossom, and the bees have been busy too. While I was engaged in my grass cutting duties I happened to glance into one of the trees, and there at eye level was a small fruit. Now this tree has never fruited before, and as far as we can remember it is an Apricot. If so then I am really pleased as so far I have counted half a dozen small fruit hidden amongst the leaves. We know that they are not peaches as the blossom was totally different, so I guess that only time will tell. The rest of the garden is also coming on well. The flower seeds seem to have started to grow, and now we are faced with a bit of a dilemma. Are they flower that are coming up, or are they weeds? This is one of the drawbacks of sowing directly into the garden. Again all that we can do is wait and see.

We don't have as much trouble in the vegetable garden, as down in the trenches things are a-stirring. In the pictured trench I think that these are our Swede coming up. Before anyone says anything we know that they will need pricking out, but normally we lose some to the local ant or bird communities. Then there is the other hazard known as cats, and we have four of them. Mr Cat isn't too bad as he likes to supervise our gardening efforts, but the other three see these seed trenches as good places to hide before pouncing on one another. Merlin soon gets bored with that and starts to pursue his new hobby, which is chasing the black crickets. The ones that look like Darth Vader, I tried to get a close up picture of one, but wouldn't you know it they are camera shy.

So the garden is looking quite good, even if I do say so myself. The grass has been cut, yet again, and I have been sweating like a Marine in a spelling test trying to get it all done. The shed and the barn have been tidied, as has Net's studio. We have even got the pool out and put up, although at the moment that is in the process of having it's Spring clean. The sun has been shining, I am back in my shorts so my knees have seen sunlight again. I considered going topless, but thought it wiser to spare the village that shock so early in the year. I guess that things would have been done a lot quicker if we had concentrated solely on those tasks in hand.

We have an electric door bell at our gate and every winter the cold kills the battery inside the bell push. So every year we replace the battery, or the doorbell. I have rigged up a bell, of the cow or goat variety, which will work whatever the weather. Yet it needed something to pull the clapper. So I came up with the brilliant idea of checking out decorative knots on the Internet. After all how difficult can they be, as they are only made from bits of string. As you can see in the accompanying picture my attempts at tying a Monkey's Fist met with varying success. They would start well, but when it came to tightening the knot up any slight distraction and that was me lost. So it then became a case of 'round again class leader'. However on this afternoon's craft doodah I did manage to tie a fine example and that now adorns said bell. Although come the morning it will probably be just a bit of cord hanging there.

On a random note we have not long had a phone call telling us to look at the moon. We would have done but it came up directly behind Baba Donka's big Pine tree, but apparently the moon was red when it rose, then went gold, then yellow and is now moon coloured. Another random note is that we have also had a microlite flying near the village this evening. Typically I go to get my camera and he takes the opportunity to make his escape. 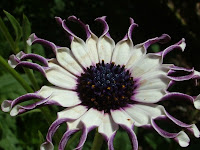 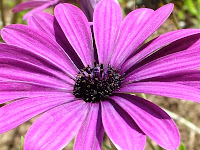 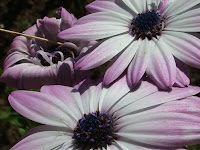