Fairies In Our Garden

As April draws to a close it is time to reflect on a busy few days. Some of you will have been aware that there was the 50/50 sale at Trinity Rocks campsite on Saturday. Without any further ado I feel that I must thank certain people for their generosity, you know who you are. I also want to thank a pair of stalwarts who have provided a lot of very welcome support and help, and of course all who came to the event. A big thank you has to be said to Cliffie for giving us permission to hold the event there in the first place. Saturday was rather warm to say the least, but at least all of the sales were able to be conducted in the shade. I think all of those who turned up went away with some lovely bargains, maybe coerced slightly by the auctioneer and his lovely assistant. There was not a piece of gold lame between them, but I don't think that Southeby's will be unduly worried just yet. Another good thing was that there were also some of our Bulgarian friends there. All in all a good afternoon, the sun shone, people enjoyed themselves and money was raised for a good cause. It was quite a long day for some of us, but it was highly worthwhile and we finally got the chance to put another few faces to names. I have to say that even the frog's chorus didn't keep me awake that night.

The Sunday was another hot day, and so once again the knees were being aired. Knees like these have probably not been displayed since the days of Gunner 'Lofty' Sugden in 'It Ain't Half Hot Mum'. Sunday's venue for this brazen show of knees was at Camping Veliko Tarnovo, and the car boot sale. The place was crowded, as the weather seemed to have brought everyone out from hibernation. Yet despite the numbers of people and how busy things were, especially in the cafe, Nick, Nicky, and their staff met it all with their customary smiles and efficiency. So I would just like to say a very big thank you to them all. We had a leisurely saunter round, but our main requirements were plants, and we all seemed to be quite lucky. Once again theese car boot sales are great social occasions and give people a chance to catch up and have a natter about the previous month's goings on in different areas of the region. I was pleased for Yolanta as she met up with Polish friends and was able to talk  in her native tongue, sometimes it is difficult to remember that English isn't her first language. Even I ended up nattering away.

Today has been just as hot, but if you look at the thermometers it has only been 31/32C, so I hope that no one is complaining about the heat just yet. The only thing that has been noticeably different this year is that we haven't had the usual rains and thunderstorms. Merlin doesn't mind as he is too busy patrolling the garden looking for those black crickets, the ones that look like Darth Vader. So while Merlin was occupied we were busy washing dogs, Fenny and Polly were not too bad, but it took both of us to do Sirrius. Then once he was done he just wanted to go and sprawl out in his favourite spot, so he is probably just as dusty again. At least he no longer has that certain doggy smell, which is quite fortunate as he is asleep alongside my desk and chair at the moment. 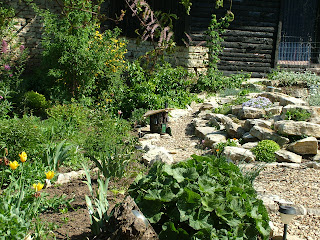 Another of today's projects was something to fire our young grand-daughter's imagination. We have had this tree stump next to the rockery for some time now, but now it has been slightly converted. Ash is of an age where everything is still magical, and princesses and fairies are everyday occurances. Well now when she comes out to visit she can see that fairies have moved into Nana and Granddad Bulgaria's garden. Long may she and her little sister enjoy their world of make believe and fantasy. It was actually fun making the doors and windows, while Net was making the roof and the swing. There is even a solar light next to it so that the fairies can find their way home at night.

Life continues much as it ever does here in the village. Chickens are often to be seen pawing at the dirt over on the green, geese can be heard honking and there are a least two seperate lots of peacocks in the village, and also some pheasants. Then round about one o'clock it is as though the mute button is pressed, it all goes silent for a couple of hours. Just when you are getting used to the silence a cuckoo starts, at least I hope it is a proper cuckoo as I have never heard of 27 o'clock. I am not sure, as I have not seen them yet, but it sounds like the Golden Orioles are about and if they are here hopefully so are the Bee Eaters. If I am lucky I might even be able to get a photograph of one this year. 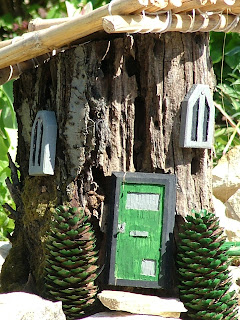 A very warm welcome to the latest follower of this blog. I have to be honest, when I first started writing this I didn't think that many people would be interested, but now I find that it has been read in over 30 different countries. So a very big thank you to you all for taking the time to read my musings and ramblings, and to those who comment or follow thank you for joining in. So until the next blog I wish you all well 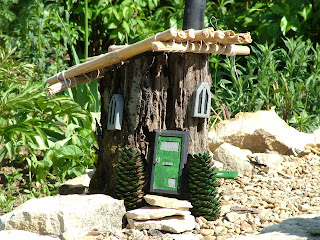