On the first Saturday of Lent, five weeks before Easter, Bulgaria celebrates Todorovden. This is also known as Horse Easter. We were told that the village of Ivancha was going to be celebrating this and so we decided that we would go along and see what was happening. It was a bit up in the air on the Friday as it was snowing, and would we be able to make it down off of the hill.

Luckily Saturday morning started with bright blue skies. The wind had picked up again, and the gusts certainly had a bit of a raw edge to them. As we had never been to Ivancha before, we thought it best to meet up in Polski trambesh and follow from there. It also gave us a chance to have a coffee and a loo break before we got to Ivancha, as we were told that it was only 12 minutes away.

We arrived in the square shortly after 10, and there was a ladies choir singing, but only a couple of horses there. We didn't know if we had missed anything as we were told that there would be a parade of horses and carts, but everyone seemed to be getting in their cars and leaving. We thought that it might be wise to follow them, although there was no one to really follow by the time that we had loaded up. We had seen the general direction that everyone had headed so off we went. Thankfully someone managed to point us in the right direction, and eventually we saw a lot of cars parked up near the cemetary, It was either a bloody big funeral, or it was the right place, and as luck would have it there were plenty of horses, donkeys and carts milling round. 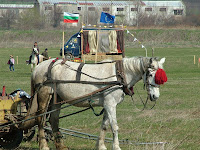 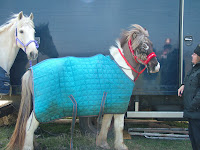 Everyone seemed to be hanging around waiting for the wind to die down. Looking at the area geographically we were in a valley with hills either side, and the wind was being channeled straight down between them. They held a race but it wasn't too successful, as the wind was spooking the horses, so for safety they decided to call off the other races, but the attendance was a distinct improvement on last year when they only attracted 3 horses.

A local family of Storks were about the only things enjoying the wind. They were just gliding head on into the wind, like some modern day version of a Pterodactyl. You wouldn't want to be beneath the flight path of one of these if it was caught short, but we shouldn't complain too much as the warmer weather is just around the corner. Our next task was to find a cafe back in the square, so that we could get a coffee and warm ourselves up. It was decided that despite the wind the day was too nice to waste, so we wanted to go walking somewhere. On a previous trip I had noted a sideroad off of the main road that the fishermen use, the big question was would I be able to find it again?

I am happy to report that I didn't suffer a navigation malfunction, and managed to find it without any problem. As we drove down the side road towards the river one of those 'traffic census' ladies was walking back up. I have a sneaking suspicion that she had not been fishing. Even though we are mid March, we sat down on the other side of the bridge, out of the wind, and had our first picnic. The noise of the bullfrogs in the pond next to us was louder than the traffic on the road. The river was running quite fast and the sunshine was causing little diamond sparkles on each wavelet, and what a civilised way to spend an afternoon.

With the picnic done it was time to explore along the river. There were signs of life springing up wherever we looked, the trees are showing signs of coming into leaf, and the wild fruit trees are plastered in blossom. Even with the strong wind at our backs it was great to be out in the fresh air. It is disappointing to see the amount of rubbish that has just been dumped. Sometimes I do wonder if people actually appreciate the beauty of the countryside that Bulgaria has in abundance. Surely it can't be too difficult for people to take their rubbish home with themselves.

Even in the most surprising of places there are little splashes of colour, as Mother Nature wakes from her winter slumbers. We have daffodils growing in the garden, but they are not even close to flowering, so we have that treat to look forward to. We have the other direction of the river to explore next time, and there will be a next time as it really is a great spot for a picnic. It is surprising what a little bit of sunshine, and longer days, can do to make for long term plans. The countryside is wonderful round here and we fully intend to make the most of it. All in all I count yesterday as a great success, and we spent it in the company of some great people, which makes it that much better. You know who you are so a very big thank you, and looking forward to the next time already.