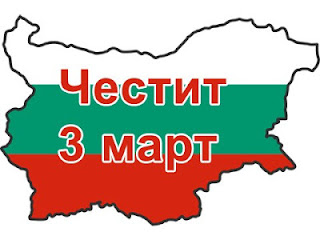 Today is a very important day in the Bulgarian calendar. This year marks 135 years of Bulgaria's Liberation from under the Ottoman yoke, where they had been held for five centuries. The actual Independence Day is celebrated later in the year in September. Today commemorates the signing of the San Stefano peace treaty in 1878 between the Empires of Russia and Turkey, which enabled the Bulgarian nation to re-emerge, although that wasn't the final version of the peace treaty. 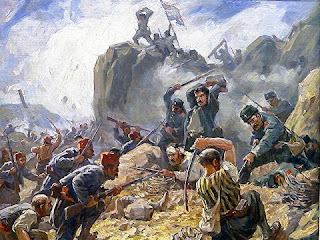 This peace treaty came at the end of the war of Liberaion which was fought between 1877 and 1878. The Russians became involved due to attrocities that the Ottomans had carried out against the  Bulgarians in the April uprising of 1876. Fortunately it was reported by an American journalist who was working for the British press. There are many famous names linked to the Independence movement of the 1870s, some are even known to us foreigners. People such as Hristo Botev, Georgi Rakovski, Lyuben Karavelov and Vassil Levski were leading figures in the Independence movement but the deciding factor in ousting the Turks was the Russian involvement. This was when Tsar Alexander II of Russia declared war against the Ottoman Empire, over concerns about treatment of orthodox christians in Bulgaria. After the liberation Bulgaria came under Russian administration for a couple of years, but it also allowed Bulgaria a gradual transition to achieving nationhood once again. 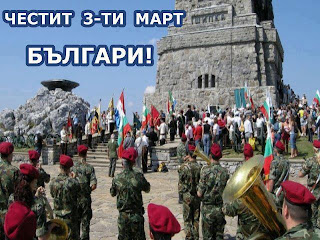 Today there are celebrations being held throughout the country. There are normally large solemn celebrations held at the memorial atop the Shipka Pass, which was where fierce fighting took place during the war. Flowers and notes of thanks are often placed at the various liberation momorials.

This year the are also various protests being held across the country, but the organisers are hoping that these protests will pass peacefully. In Varna people are being asked to wear a badge depicting a flame. This is in recognition of Plamen Goranov, a 36 year old who set himself on fire as an act of protest. In a village of this size not a lot happens, as people tend to head into the surrounding towns or the city of Veliko Turnovo. Despite a chilly start we now have sunshine and clear blue skies, a change from the snows of previous years. 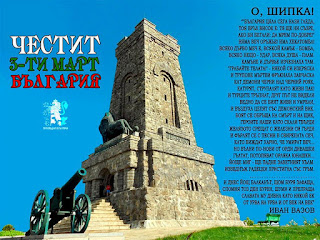 Happy National Day of Bulgaria! Happy March 3 to all Bulgarians! 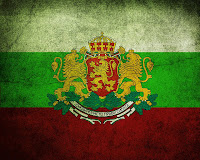