We Have A Little Snow 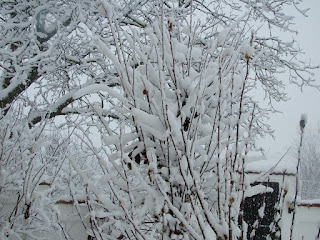 Well here we are in the grips of another Bulgarian Winter, and the novelty of snow has definitely worn off. A  few days of living in a Christmas card world is enough for me. This is our 4th winter here, and each one has been different, and try as we might we can never plan for every eventuality. This year we have had snow, it has then disappeared only to reappear again. Initially I thought that the majority of the snow was going to pass us by, and admittedly we haven't had the usual three feet of snow but what we have had recently seems to be fairly constant. Nothing seems to be moving in the village, and even the chickens and dogs sound as though they are muffled. Our cats and dogs have developed an affinity for our wood burners, so much so that even SillyO tried climbing in one as I was putting logs into it. 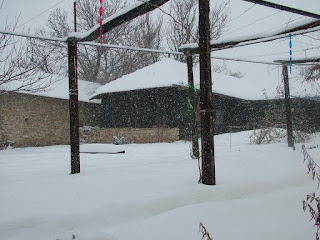 One constant that we do have is that nasty layer of ice that lurks underneath the snow. As an added bonus we have also had an ice storm, and then ended up with about an inch that was on top of the snow which was on top of the ice. Even walking round to the Post Office or the Magazin was not the easiest of things to do. Our temperatures do not seem to be as low as in previous years, but according to the Bulgarian news items record lows have been set. To put it all into perspective, other areas of Bulgaria and indeed other areas of Europe have had it so much worse than we have. Down in Southern Bulgaria a couple of dam walls have failed causing fatalities and a lot of damage, in the Ukraine the cold snap has killed a lot of homeless people. I don't wish to downplay the Bulgarian winters it can get slightly chilly during the day, often struggling to get above zero, but the big difference between here and the UK is that here it is largely a dry cold, and not that horrible bone chilling damp cold. So a few sensible precautions and we find that we can manage.
One odd thing that happened last week was that I was interviewed for the television, they would have preferred to interview both of us but it would have to be the day that Net was suffering with a head cold. I think that is what is commonly known as 'Sod's Law'. It was a bit of a follow up to the newspaper interview that we did previously, and they also wanted to know how we cope with the Bulgarian winters. They did find it rather strange when I stated that I had worked in colder temperatures, but I didn't tell them that I spent 3 months living in tents inside the Arctic Circle after I had completed my Arctic Survival Training. Hopefully the Kmet will let me know when it will be televised as I neglected to ask. I was more surprised that they had managed to drive up to the village in a Renault Megane when even the delivery vehicles can't make it through to the Magazin.
Like a lot of people we are looking forward to Spring, but who can tell when the winter will end. Only another 3 weeks and it will be March, but Baba Marta can be a fickle old lady and we can have brilliant sunshine one day and a hail storm the next. There could still be a long way for the winter to go yet. 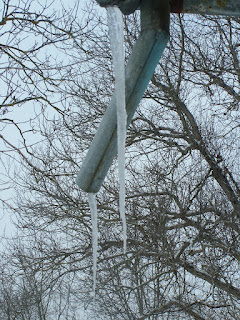