The English Struggle In Winter? 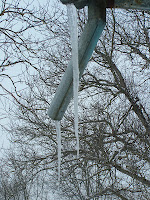 Here we are, still February, and still snowed in. I did make an attempt to get the car out yesterday, and surprisingly it even started first time despite some of the night time temperatures which can kill a battery. We have quite a long drive down to our main gates and some of it is quite deep in snow, I managed to shift some of the snow, now we have big snow mounds in the drive, but the dogs seem to enjoy these. I backed the car out from under the barn, got about 10 feet and that was it. The car wouldn't go forwards or backwards, so not wanting to leave the car where it was it was back to shovelling snow from under the wheels. No joy with that, or with warm water, I eventually managed to use some spare bitumen shingles as snow mats (Net's idea not mine) and now the car is safely back under the barn until the snow melts a bit more. So gravel, snow and ice don't really mix at this time of year. This is the longest winter out of the four that we have been through since arriving, we might have had blue sky days but the snow hasn't really shifted. Every time that it starts to shrink and melt we have had a fresh batch swirling out of the sky. We have had some thaws, and the icicles have been out, hanging like Dragon's teeth from roofs and guttering. As mentioned the snow starts to thaw and shrink, but the worst thing is that it just refreezes, so we have been largely ice bound for about four weeks. No wonder I often refer to our village as 'Ice Station Zebra' at this time of year. I have noticed that the weight of the snow has damaged some of the branches on the Pine tree in the garden next door, so hopefully something will be done about that later in the year before it becomes a potential problem. 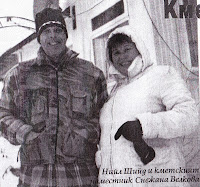 As some of you might remember, a couple of weeks ago I was interviewed by TV7. It seems as though it wasn't a follow up to the piece that 'Borba' did the other year, but how the English cope with the winters out here. One part was about how the new English family arrived in the village at the end of January, and the Kmet had to make sure that they had enough wood for burning to keep warm throughout this long winter. The interview was aired on TV7 about 2 weeks ago, but I have only just found out about it. Hopefully this is the link http://tv7.bg/news/4705662.html for anyone who might not have seen it. By Bulgarian friends I have been told that in the piece where the Kmet is speaking, she is telling the reporter how the English have to be taught how to light their fires and stoves. Maybe I was asleep when this happened but as far as we are aware she must have forgotten to do this for us. The report has also made it into a newspaper, from where this picture has been taken, unfortunately I have yet to find out which newspaper so that I can get the article translated. If it is anything like the previous interview in 'Borba', the translation makes for quite amusing reading. In case anyone is wondering, I am the one on the left in the woolly hat, with our village Kmet.

I do remember the reporter asking how Net and I cope with the cold, and he did look at me rather oddly when I told him that I have worked in colder than this. It is true though, as I have previously spent 3 months inside the Arctic Circle, during the Nordic winter living in tents and snow holes. There the night time temperatures were regularly below -35C, and you could hear trees explode as the sap froze. I don't want to put anyone off, yes the winters here are cold but it is a dry cold, and not the damp bone chilling cold of the UK. We have gone through more firewood than I anticipated, but we haven't run out, and a lot of the ExPat community throughout Bulgaria have said the same. So although it might not have been 'that'cold continuously, it has seemed to drag on for a long time. We do get bright blue skies at times, and by and large the Village bus is like the Pony Express it always gets through. Despite this being our 4th winter here we are still learning, but a lot of our preparations have paid off. So do we struggle? I think that the answer lies in the fact that we are still here.

So until our next blog, this is Ice Station Zebra signing out
Posted by Unknown at 14:44