There Is Life Out There

Well we have finally both made it off of the hill and into Gorna, and we didn't even have to use the village bus. It was a bit touch and go as to whether we would actually make it, but on a wing and a prayer we did it. Today being Thursday, I have to take you back to Tuesday. We have been scanning the various weather forecast sites, and decided that Wednesday looked quite favourable. We were down to our last gas bottle for the gas fires, we have three of them, and I had run out of fuel for my chainsaw. Yolanta also wanted to fill up a gas bottle too, so it was decided that Wednesday would be the day. 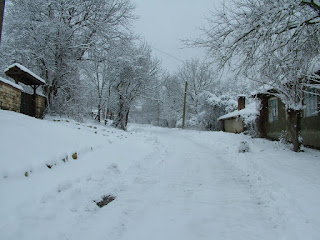 So on the Tuesday, armed with my trusty shovel (or should that be rusty shovel, as I have killed my snow shovel) I started to clear the drive of snow. You know these jobs that 10 minutes after you've started them you wished that you had never had the bright idea in the first place? Well this was one of them. Despite the recent sunshine, the snow was still over a foot deep behind the house, and unfortunately the driveway was buried underneath it all. So while the dogs and cats enjoyed the sunshine, I started to clear the snow. It was hot sweaty work, and I got told off for removing my shirt, but I was sweating like a Marine in a spelling test. Eventually, after about four hours, I reckoned that I had cleared enough snow to actually get the car out from under the barn, down the drive and out of the gates. I had muscles like Arnie, unfortunately not Swarzenegger but Higginbottom, the doddering old man. To save time in the morning, I thought that getting the car out and turned round would be worthwhile, and also the morning sun would help to warm it up.
Wednesday morning arrived, and the sun was shining in a bright blue sky, it was going to be a good day. The animals were all sorted out, the gas bottles and petrol can were in the back of the car, Net was sat in the car and I went to open the gates. First problem, I couldn't get the gates open wider than 3 feet, all of the snow melt had run down the drive and had frozen with the overnight temperatures. Brilliant!!!! My shovel wasn't clearing it fast enough, so I went and got my wood axe. There were bits of ice and frozen mud flying everywhere,  but slowly but surely I managed to open the gates wider and wider, until I had an opening wide enough to get the car through. So back up to the car and turn the wing mirrors in, into the driver's seat turn the key, and nothing, not a bloody dickie bird. Were we actually destined to be able to escape the village under our own steam? Net wandered off down to Yolanta's to let her know what was going on, I took the battery out and put it on a fast charge as the voltage wasn't that low. Meanwhile Net was helping Yolanta dig her driveway out so that we could use her car to jump start ours, as Net didn't know that that I had put our battery on a fast charge. She only realised this when she came back up the drive to let me know that the car had to go down to the bottom of the drive to enable the jump leads to be connected. I took the battery off charge, refitted it, secured it in it's cradle, turned the key and it started first time. Meanwhile Yolanta was bringing her car up, and we met her halfway. So Yolanta had to turn round and park up in her garage and sort out her empty gas bottle.
Eventually, we managed to set off into Gorna. The main road through the village still looked a bit 'iffy' so we decided to use our normal winter route of the cemetery road. It was still snow and ice, but at least that had made the surface fairly level, and if we did happen to go 'off road' there are no nasty ditches or banks to go down. We made it out to the main road, despite having a fully laden wood lorry tooting at us and trying to pass, I learnt my lesson last year and refused to let him pass, luckily at the main road we both went in different directions. The main road was nice and clear, and the trip into Gorna went without further mishap. In way of a mini celebration we had a nice meal, which even included beef stew. We even managed to visit Linda and Geoff in Dragizhevo, before heading back home before the melted snow and ice started to re-freeze. 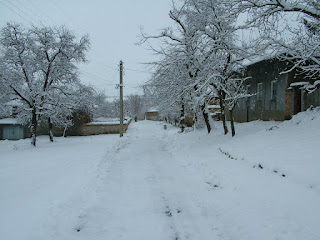 We had such a good time that Net and I even did it all again today, but fortunately without any of the hiccups of the previous day.
Posted by Unknown at 21:07