It's Now The New Year 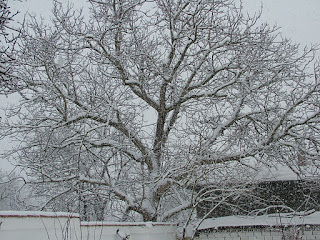 Well here we are, 2012 and a bright and shiny New Year. If you believe all of the rubbish that has been said about the Mayan calendar, the world ends in December, so I thought that I had best do a blog just in case. So far we haven't had the usual amounts of snow that we are normally faced with at this time of year. That is not to say that we haven't had any, but it snows, it thaws and then it freezes, add another layer of snow on top and trying to get anywhere turns into a major evolution. We have even had some blue sky days, and they have felt very mild compared to the normal winters here. The dogs and cats don't seem to mind the snow falling, snow flakes are there to be chased and barked at. Once their duties have been done then it is back indoors for them and they then crash out in front of the fire. 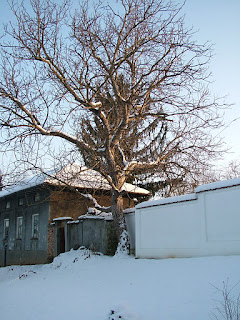 For some strange reason our Post Office has not been open since mid December, so different to when Ivanka was the Post Mistress when it was open without fail. Normally it wouldn't be a problem, but I pay the majority of our bills round there. Not wanting to be without electricity, telephone, TV or internet there was nothing for it but for me to get the bus into town and pay the bills there. So into Gorna I went on the lunchtime bus, which as I have mentioned on previous blogs is an adventure in itself. To ensure that I can get the bus home again I only stay in town for about two and a half hours, but it does give me enough time to get everything done, plus any odds and sods that we need shopping wise, and if I'm lucky coffee. I normally take my Kindle in with me, and over coffee download any books that I have selected. The problem with the coffee house is that they have the heating turned fully up, and it ends up feeling like being sat in a sauna. Most likely that is where I have got this head cold from, so far it hasn't developed into Man Flu but you never know. Unfortunately Net has also got it from me, and after the worries of last year I am keeping an eye on her, as we can definitely do without another trip to the hospital or the Doctors.

Whilst in town I managed to get the insurance for the car sorted out, so that is done for another year. Normally I would get the vignette, that's like the road fund licence, at the insurance brokers but they didn't have any when I went in, so I had to go round to the main Post Office. A whole 67 Leva for the joys of using the Bulgarian road system, pot holes and all. Compared to the UK road fund licence it is an awful lot cheaper, as is the insurance. It does amaze me that some Expats over here admit that it is cheap, but will still insist on swapping the vignette between vehicles. They are just asking for trouble, and a fine, if they get caught at a traffic police document check. 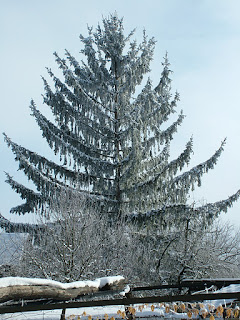 The bus home was a pleasant surprise compared to last winter, when it was a clapped out old thing that was in dire need of being put out of it's misery. It was a health hazard as there was probably just as much diesel fumes inside the bus as there was outside. The downside is that the 'new' bus is a bit smaller, so a bit more cramped but at least I'm not worried that the seats are going to detach from the floor as we go round the country lanes. Whilst waiting at the bus station in Gorna I was talking to one of the village gypsies, and he informs me that there is a new English family who have recently moved into the village. Maybe when we are feeling less like death warmed up we will go and have a nose round the village. So after three years I can now have a basic conversation, in Bulgarian, make myself understood and get more than a gist of what is being said to me. By all accounts it hasn't gone unnoticed either, as a lot of the locals like the fact that we are trying to learn the language and to fit into the village way of life. One thing that we did say before we made the move across, was that we wanted to integrate into the village way of life, so far so good.
Posted by Unknown at 12:10