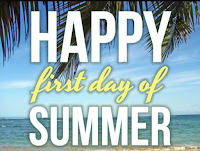 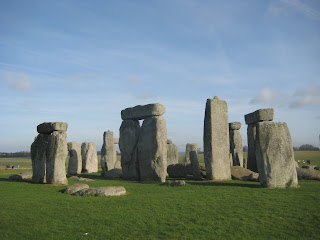 Perhaps something like the mystical wonder of Stonehenge? I consider myself lucky enough to be of an age when Stonehenge wasn't ringed by fences. You used to be able to wander between the stones themselves, and I distantly remember that there used to be a photograph of me, with my Grandparents,and I was sat on the altar stone. Nowadays it is a much more popular destination, so to preserve it for future generations the fencing was installed. Unfortunately that means that apart from special occasions you can't get up close to the stones,and so people miss out on sensing the mystical aura surrounding these stones. Wouldn't it be ideal if there was something similar which could be enjoyed in the Bulgarian sunshine, rather than the dampness of Salisbury Plains? 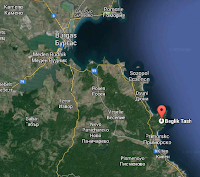 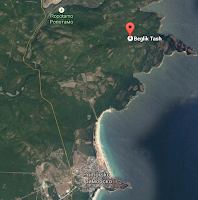 If you find yourself on the Black Sea coast near to Burgas, I might have a solution for you.It is a place known as Beglik Tash,and lies between Burgas and Primorsko (15 minutes drive), on the Maslen Cape. It was only rediscovered in 2003, when trees were being cleared in the area, as more trees were cleared the size and importance of the site gradually became clearer. Now as an open air museum, it is maintained by the Burgas Regional Museum and the Burgas Historical Society.

There are sign posts directing you to a small dirt car park, but from there you have a walk through the trees to reach the site. So sensible footwear is recommended. It is situated on a wide meadow, within the woods. As there is a boggy area fairly close by, the various biting insects are normally out in force, so insect repellent is advisable unless you fancy being on the menu for an extended family of mosquitoes, gnats, midges and deer flies. Watch where you put your feet and hands, as it is not unusual to see various reptiles basking. 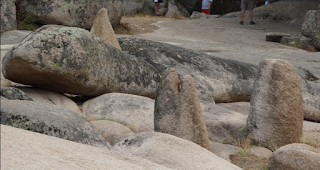 The rocks and boulders are volcanic in origin, and are formed from hardened magma. The volcano erupted about the same time that Dinosaurs roamed the Earth, in what is called the Mesozoic Era, so it has been extinct for a good few years. Even though the elements have rounded and softened the rocks, the larger megaliths still have traces of the original carvings. Beglik Tash is widely regarded as the oldest Thracian megalithic sanctuary found in South Eastern Bulgaria. With more than a third of Bulgaria still covered by forests there is no telling what other mysteries remain to be discovered. 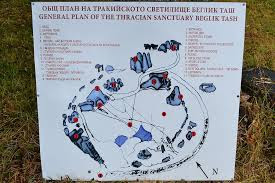 It is thought that it was used for about 1000 years, from the 14th Century BC, until the 4th Century AD. The area was settled by a Thracian tribe called the Skirmiani. Various finds have indicated that this site was used by the Thracians in the worship of the Mother Goddess, or fertility. The site was used both ritualistically and sacrificially. The total area is spread over about 6 hectares, with the main sanctuary comprising the large central area, with two smaller areas off of this. The large stones were worked on site, and positioned by hand. On some of the flatter rocks you will see water channels, circular holes and even large footprints. 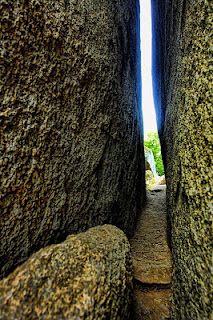 The remains of a labyrinth can also be seen, such as the slit pictured opposite. Some locals claim that the site has mystical powers, which are to do with the temple dedicated to Orpheus.It was said that the music and singing of Orpheus could charm the birds, fish and wild beasts, and also coax the trees and rocks to dance. Perhaps this might explain some of the positions you will see the rocks in.

Some of the highlights you will see include 'The Throne', from where the Thracian high priest would conduct the various ceremonies. Then there is 'The Marital Bed', a large central stone surrounded rocks, with various carved pits which were possibly used during rituals, so maybe it was even the sacrificial altar. There is a 'Sacred Cave' formed by rocks, and symbolises the womb of Mother Earth. Another highlight popular with tourists, is the sun clock. There is normally a guide available, or you can choose to do your own thing. Either way you can soak up the mystical energies from this amazing place. Unlike Stonehenge you can still wander through, over and under the stones. Hopefully this has piqued your curiosity, and you will take the time to search out this place, as it is slightly off of the beaten track. 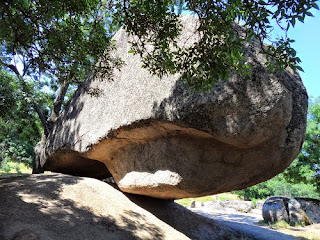 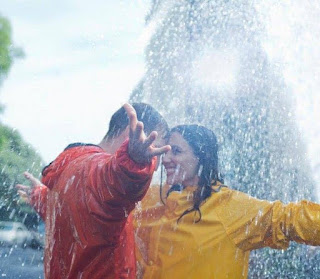