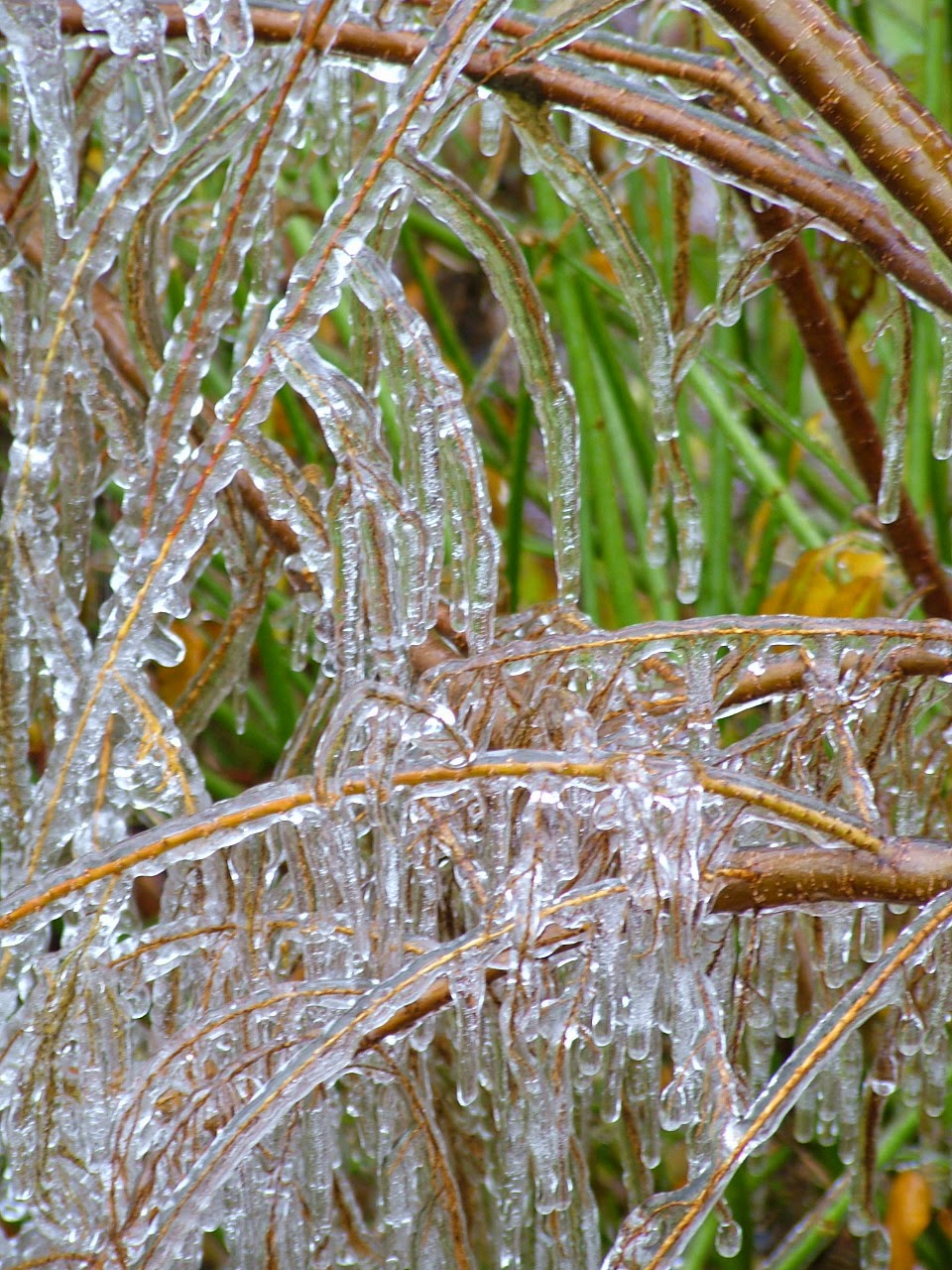 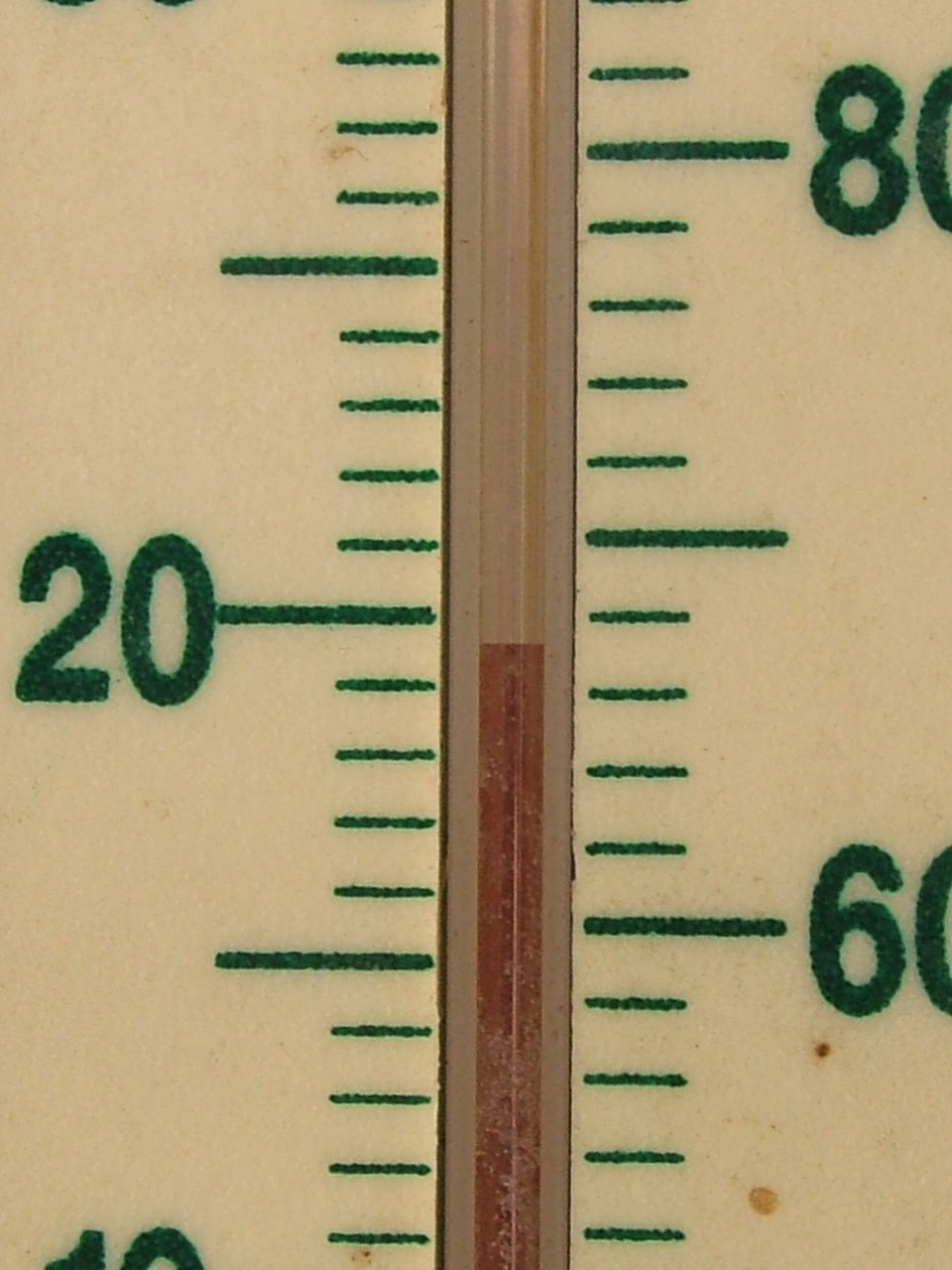 Believe it or not, today is Christmas Eve and I am sat here wearing a t-shirt, no jumper or jacket. The fire isn't lit, and even the gas fire is sat idle. We seem to be having a little bit of a warm spell at the moment. The last cold days that I can remember were at the very start of the month, it has been otherwise damp and foggy, up until about a week ago. Now we have sunshine and clear blue skies. The only ones making use of my snow shovel at the moment are spiders using it to hang their webs from. To say that the weather is a bit odd is an understatement, it is nearly as odd as one Christmas spent in Florida when it snowed for the first time in over a century. Maybe someone is trying to tell me something.

I have seen Bees trying to hunt for any available flower, but they seem to be in quite scant supply. Every so often you see a fly drift past, and you think that can't be right. Here we are as the end of the year draws closer and insects are still out and about. Until I had seen the weather forecast I was slightly concerned that these mild temperatures might have meant that we would be inundated once the summer months get here. I think that we can safely say that we are not going to be getting a white Christmas this year, the New Year might be a different story. 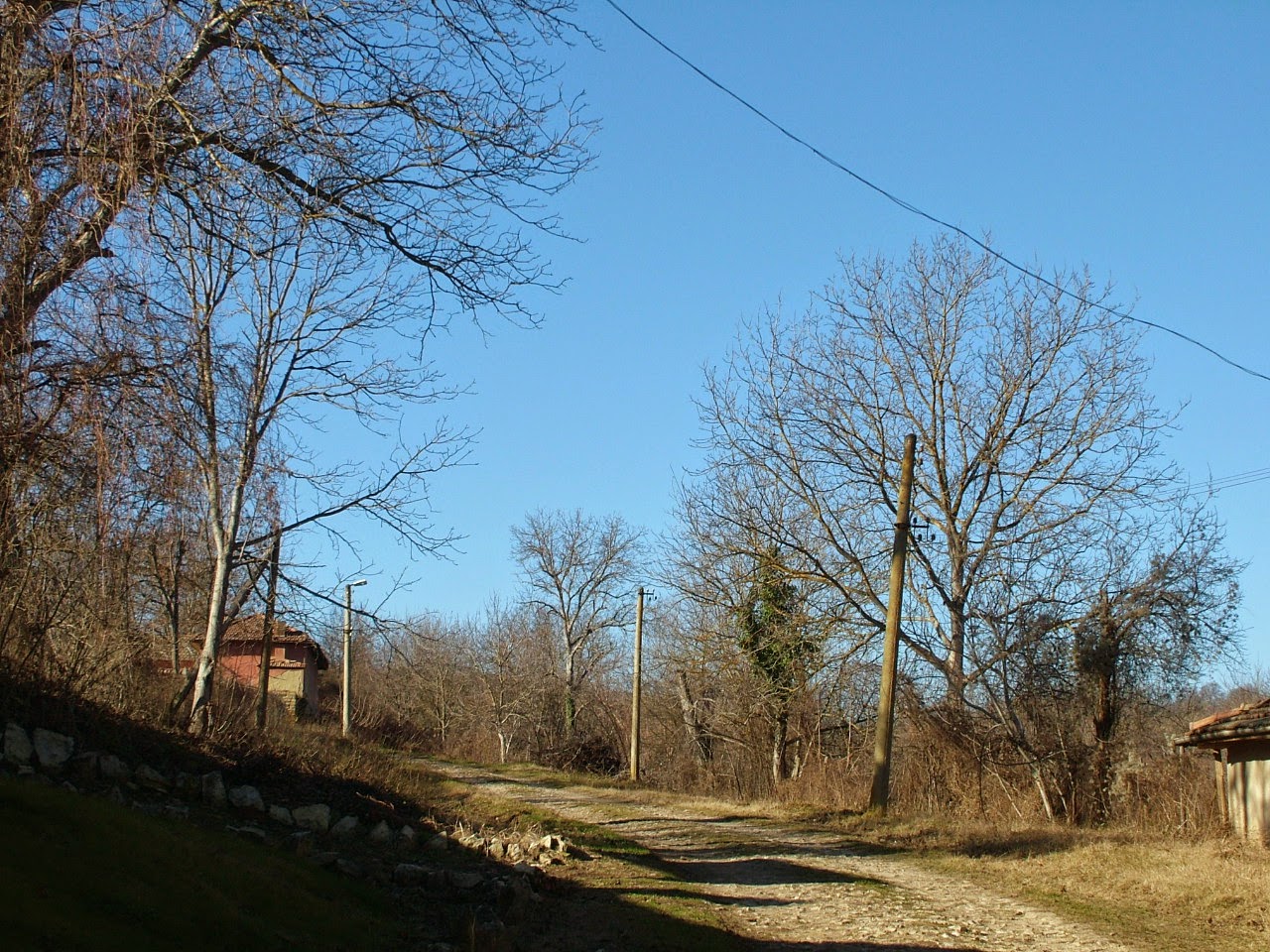 In the meanwhile all we can do is enjoy the weather, the firewood pile is slowly going down but nothing like in previous years. All of the stocking up we did in case of bad weather is still there, so we are still fully prepared should we have to face a prolonged cold spell. Who knows I might have to evict some spiders before the year is out, as I might find it necessary to once again wield the snow shovel. The dogs are enjoying the sunshine, as they drag their beds and blankets round chasing the sun. They still head in front of the fire as soon as they come in, even though it hasn't been lit. The cats, especially Billy, will soon move them out of the way if they feel that there is a dog where a cat should be.

Anyway I digress, today is Christmas Eve, although in many traditional Bulgarian homes it signifies the start of three days of celebrations. Today goes by the name of Бъдни вечер, and depending on who you listen to some say badni vecher while others say budni vecher. At least everyone seems to agree on the vecher part. Not only is it known as Christmas Eve, but either Little Christmas or Incensed Eve can smetimes be used too. All too often the preparation work for the meals which are an important part of the traditional celebrations got underway yesterday. On the table itself you will often see both pine and ivy, and underneath it you will notice straw has been laid. 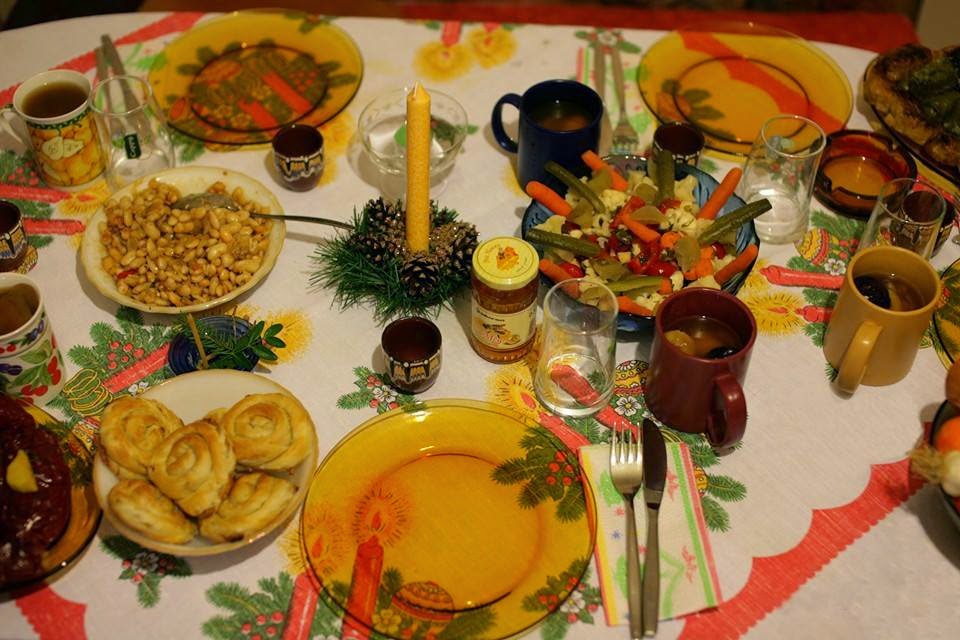 Tradition says that the dishes laid on the Christmas Eve table should be an odd number, and they should be meat free. Many of the dishes are made from the crops which the villagers grew themselves earlier in the year. You will see various dishes with beans, stuffed peppers, stuffed vine leaves, fruit and nuts, garlic and onions, quite often honey and ritual bread. Perhaps many ideas hark back to more pagan times. For instance honey is meant to symbolise a sweeter life, garlic to drive away evil spirits, nuts and seeds for health and luck and the fruit to symbolise fertility. Also a lot of the dishes are used as they swell during preparation and cooking, this is also something else used to symbolise fertility and pregnancy. 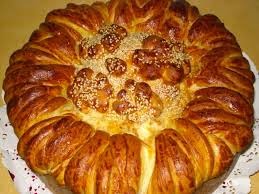 Perhaps more so in villages, this is a time for the family gathering together. You will often find many different branches of the same family in just the one village, although some have now moved away to seek a better life for their families. If they can make it back they do so, as this is an important time for families. The festivities start early with incense being burned thoughout the house, this is also meant to drive away any evil spirits. Once the table has been incensed and blessed the oldest member of the family breaks the ritual bread. Traditionally this is homemade and often decorated with crosses, circles and flowers, a coin is also baked within the bread. The first piece of bread goes to the Virgin Mary and the families ancestors, the next goes to the house, then to the animals and the finally a piece of bread is given to each family member from oldest to youngest. Whoever gets the coin will be blessed with health and luck for the coming year, should it be in one of the pieces given to the Virgin Mary or the house then everyone will be healthy and fortunate. On sitting at the table everyone moves a place to their right which is said to leave room for family ancestors and benevolent spirits. Even when the Christmas Eve feast is finished the table is not cleared away. There are two thoughts behind this, there is always something to offer an unexpected guest, and also it is these for those departed ancestors. 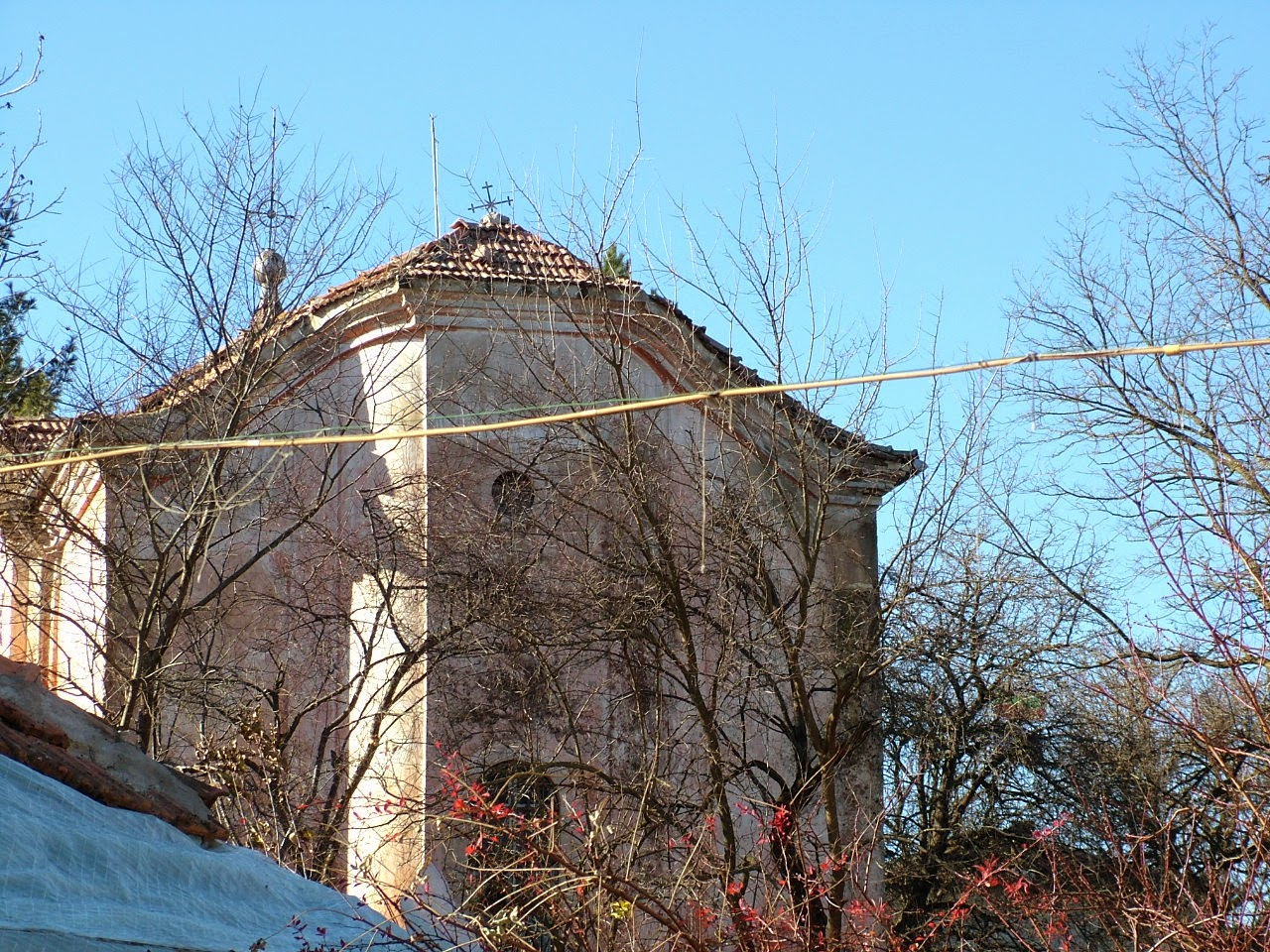 They do say that there are two different groups who come round to the villages houses singing Christmas songs. The first group is made up of boys who go round during daylight hours, once nightfalls the men take over. As you might expect for doing the difficult job of blessing houses and households certain small items are passed their way. However if you are in a small village such as this everyone is busy with their own families, so marauding bands of carollers are something which we have yet to witness. Many say that the Christmas Day church services are worth attending, but when you have a village priest responsible for several villages it can be difficult to know where such services are being held. Maybe we will just get the bells this year, and when the church is only a stone's throw away they can be hard to ignore. So the celebations often continue onto what we would call Boxing Day, or St Stephen's Day on the 27th. There are some familiar traditions too, such as the Yule Log (badnik), which is normally Oak and is placed on the fire on Christmas Eve, and is supposed to keep burning until Christmas Day, the ashes are then gathered and used in rituals in the coming year, as is the straw from beneath the table. 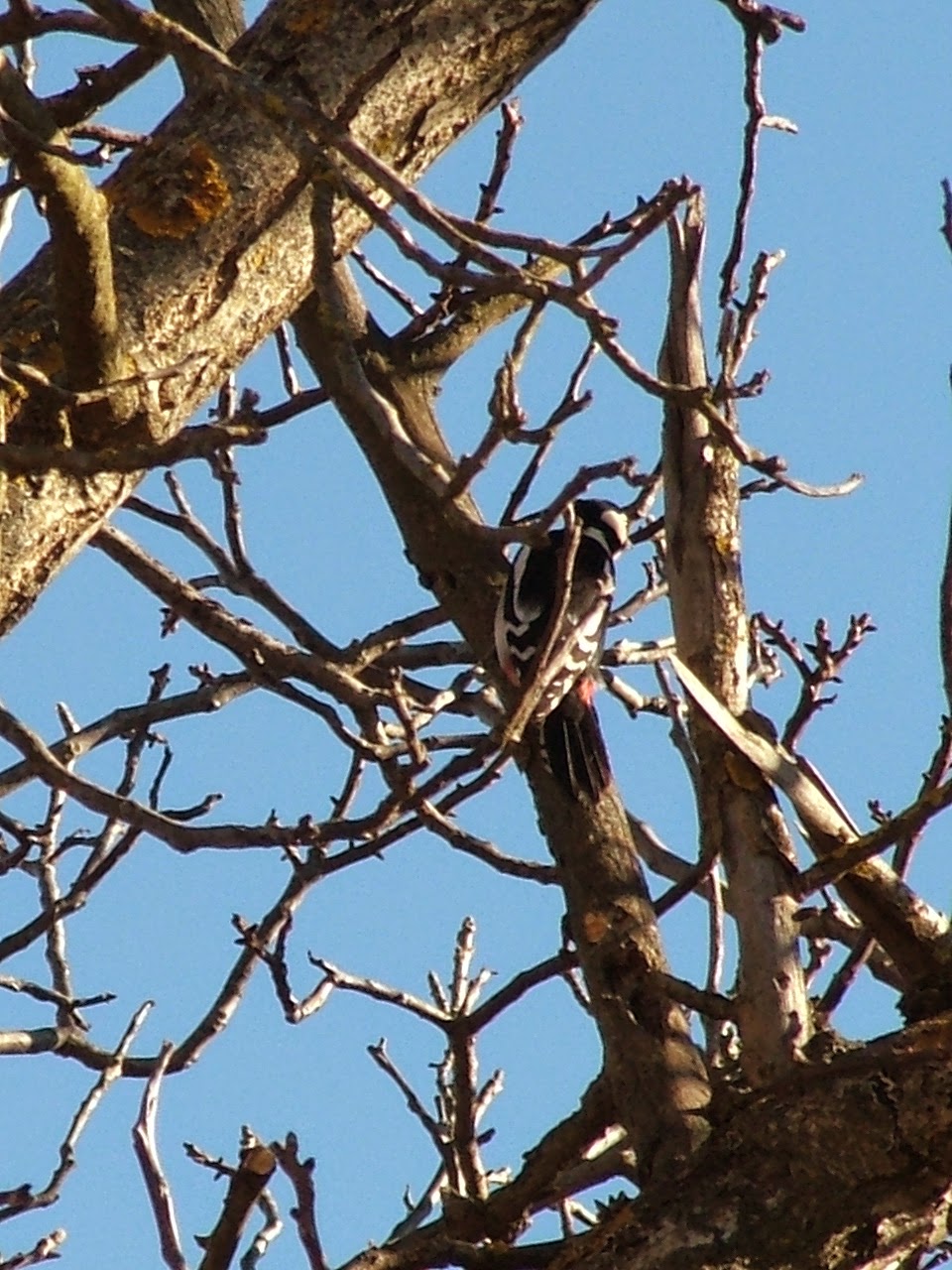 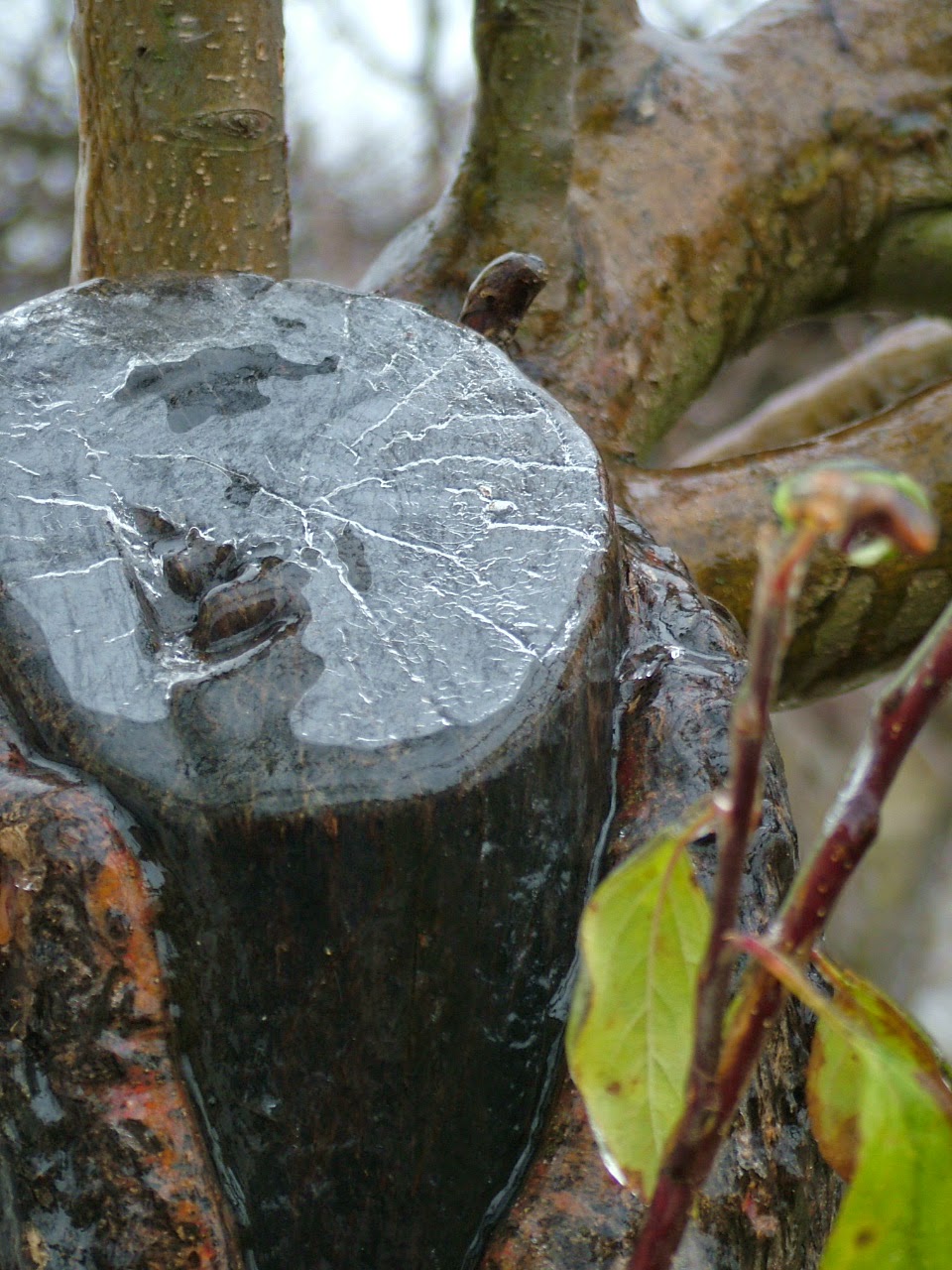 Finally all that remains is for me to wish you and your families a very Merry Christmas. Also to pass on my heartfelt thanks to you all for your support of this blog. At the start of the year it had been accessed 30,000 times, which I thought was no mean achievement. Now come the close of year that figure has moved up to 90,000. None of which would have been possible without people reading these blog articles. Thanks to you all, this blog has far exceeded my wildest expectations.

So once again wherever this blog may find you I wish you a very Merry Christmas and a Happy New Year. May the coming festivities bring you all that you need, and some of what you wish for. 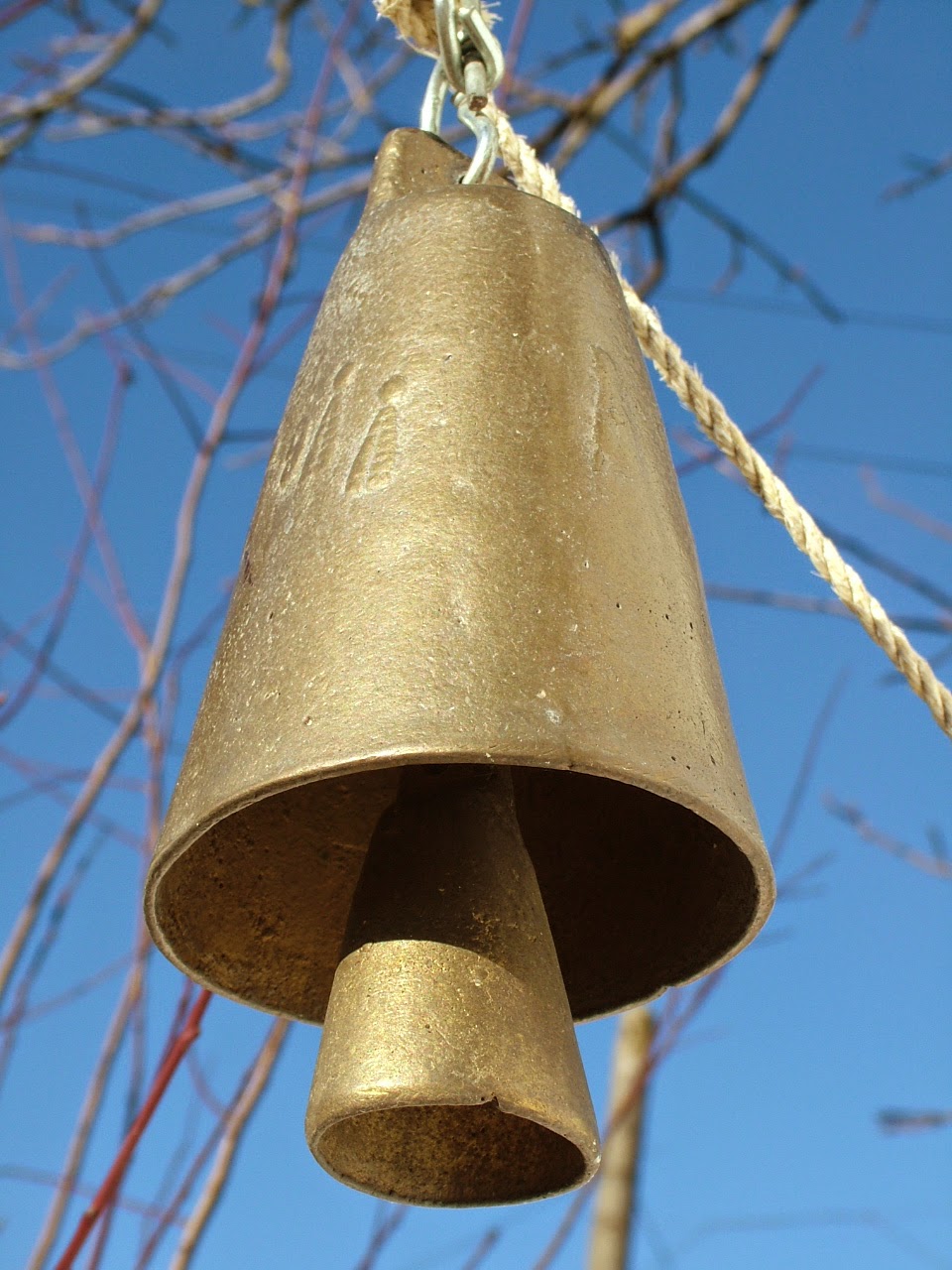