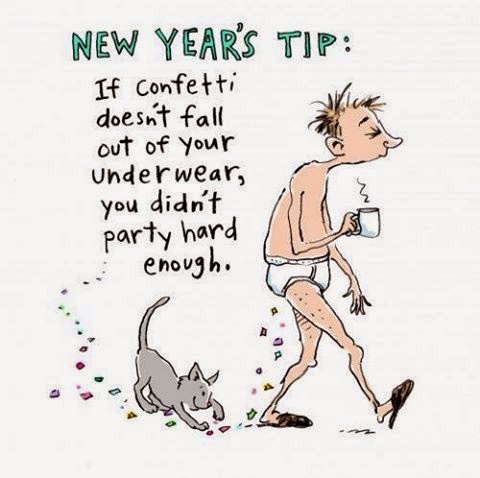 First let me wish each and every one of you a very Happy New Year, and I hope that 2015 is all that you hope it to be. Most of you I haven't seen since last year, and thanks to you all the figures on the blog were far beyond my wildest expectations, from a starting point of 30,000 you all helped push the figures to just over 91,000. Now here we are into the second week of the year and already that figure has risen by over a 1000. So once again I can only convey my thanks, but you didn't come here to be dazzled by figures, you came to read the blog and see what has happened so far. I think that I can safely say that the weather has been variable, in the past three weeks it has gone from almost t-shirt weather to being bundled up and looking like the Michelin Man, and now back again. We have had sunshine, sleet, snow, rain and wind, possibly everything in between too. 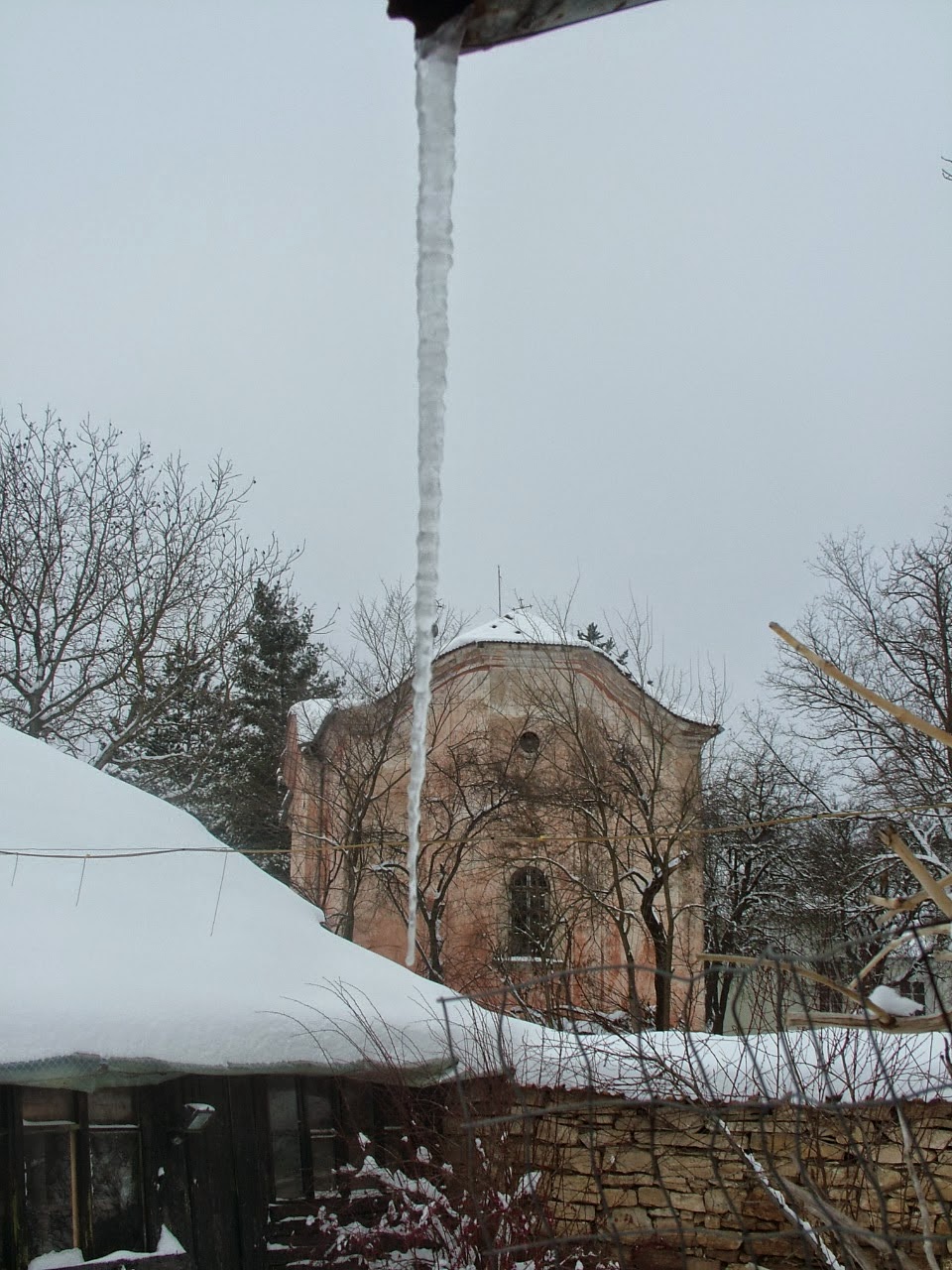 As usual I have tried cultivating my icicle of doom, this year it managed to get to almost a metre long before a sudden thaw caused it to part company from the  downpipes on the guttering. Fortunately it didn't impale anyone or anything, although at daft o'clock on New Year's Day I wouldn't have minded if it had. Once again the village children were out and about with their decorated twigs and wands, tapping you on the back and saying the little rhyme in exchange for small gifts. I'm trying not to cover old ground here as this tradition has been covered in previous year's blogs. Each year I am surprised by the number of children who trudge through the snow to our gate, and yet they are not in evidence throughout the rest of the year. So they are either alien abductees given time off for good behaviour, or they are visiting family. The previous evening we had made up 20 little goodie bags, each one containing fruit, sweets and loose change. I thought that 20 would be plenty, but they all went, maybe next year we will have to make more. I have yet to work out at what age the village youngsters will stop coming round. 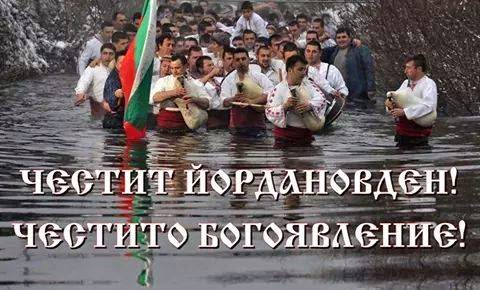 Earlier this week, the 6th, it was Yordanov Den. This is the day when young men of the village gather at rivers and lakes and casting caution to the wind plunge into the icy waters to retrieve a cross which the local priest has thrown into the water. Supposedly whoever retrieves the cross will be blessed with good health and good fortune throughout the coming year. Although it doesn't seem to happen here, I think that the closest event to us would be at the Lion Bridge in Parvomaytsi. There the winning man not only got blessed but he also gained 100 Leva, and a 20kg piglet. It would appear in some areas that some of the local gypsy lads have been trying to shoe horn their way in just to get the prize money. 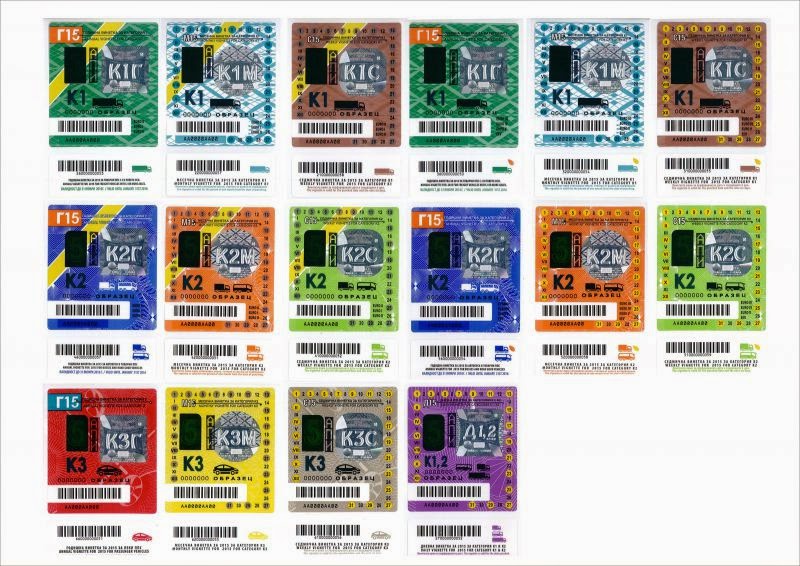 Once again due to the road conditions we were unable to get out of the village to go and observe. Normally when I renew the car insurance at the end of the year I would get the new vignette at the same time. Sod's Law meant that the Post Office wasn't open so that put the kibosh on that idea. Which meant that I resorted to the village bus, this now seems to be like an annual pilgrimage for me. Net is left at home tending fires and exciting things like that and I am sent out into the wintry wastes armed with a to do list and a shopping list. I was surprised that the bus fare had remained the same as last winter, unfortunately I think the smell of the bus was also a hangover from last winter too. Either that or someone didn't get any soap in their Christmas stocking. Apart from the whiffiness the bus is a safer option on these village roads, especially when logging lorries have plastered mud everywhere, leaving frozen ruts behind. Where there weren't ruts the snow and ice had been compacted down making for a skating rink, even the back end of the bus drifted on some bends. 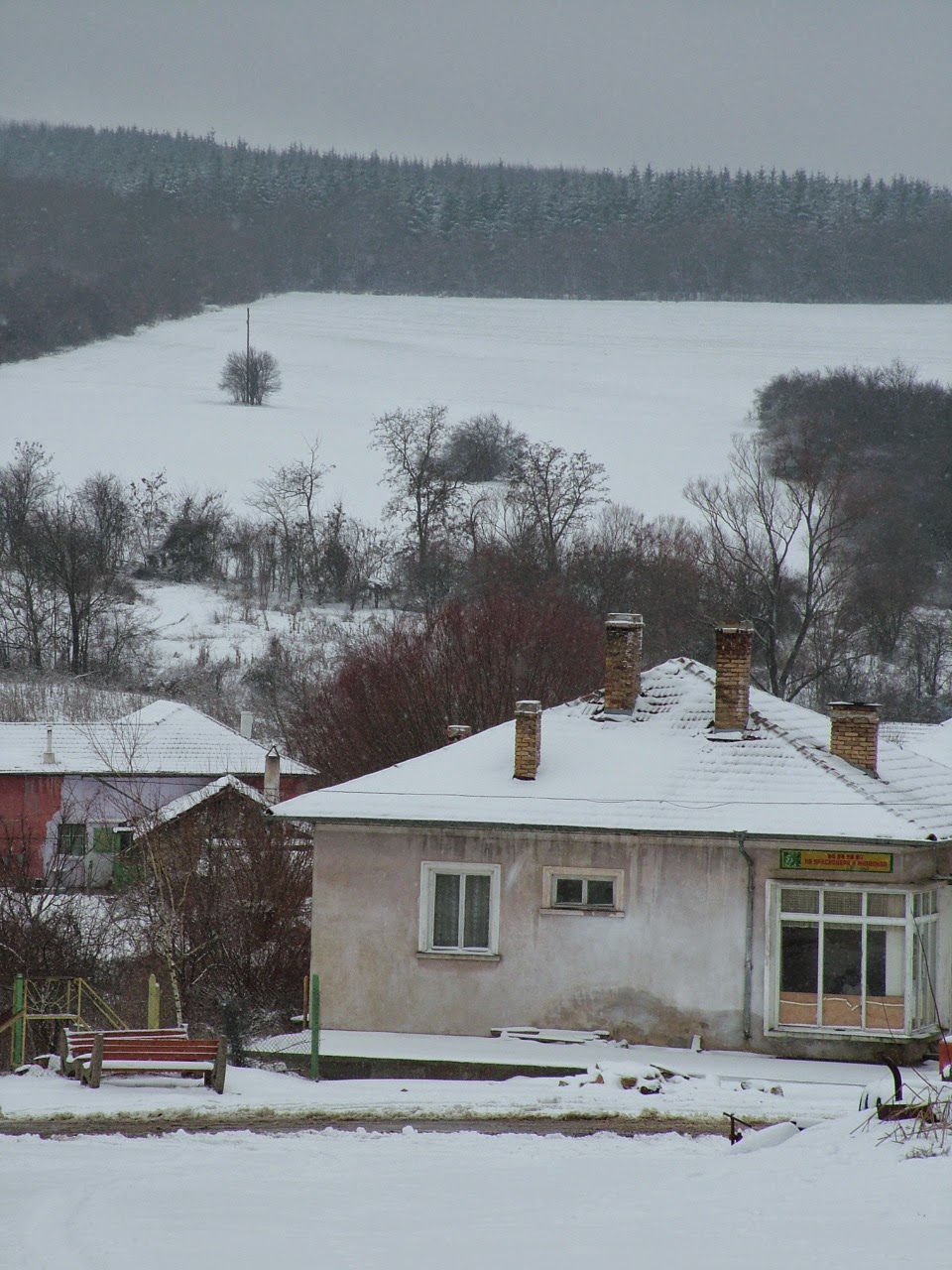 By the time we got to the main road you wouldn't have realised just how slippery the village roads were, as it was totally devoid of either ice or snow. Looking at the fields, as we made our way closer to Gorna, they were having less and less snow in them. Arriving in Gorna itself, apart from some small piles of snow at the roadsides and minor patches of ice on pavements, you could easily think that winter had passed the town by. The first stop was the post office to mail some bits and pieces to the UK, and to get the new vignette. Once again the annual cost has not risen, as it is still only 67 Leva for a full year. I seem to remember it has been that price for at least three years, unlike the road tax in the UK which always seemed to increase. Post Office done, bills paid and that just left sorting the TV package out with Vivacom and the shopping. Due to the length of time in Vivacom sorting everything out, including house phone and mobiles as well as the TV which I initially went in to sort out, I only had enough time for a quick visit round CBA before getting the bus home again. I have had a further trip into town on the bus, as you are limited to what you can get shopping wise by what you can carry, and cartons of milk take up a fair bit of room. So I have had shopping trip mk2 to enjoy, I even managed to find time for a coffee in town. 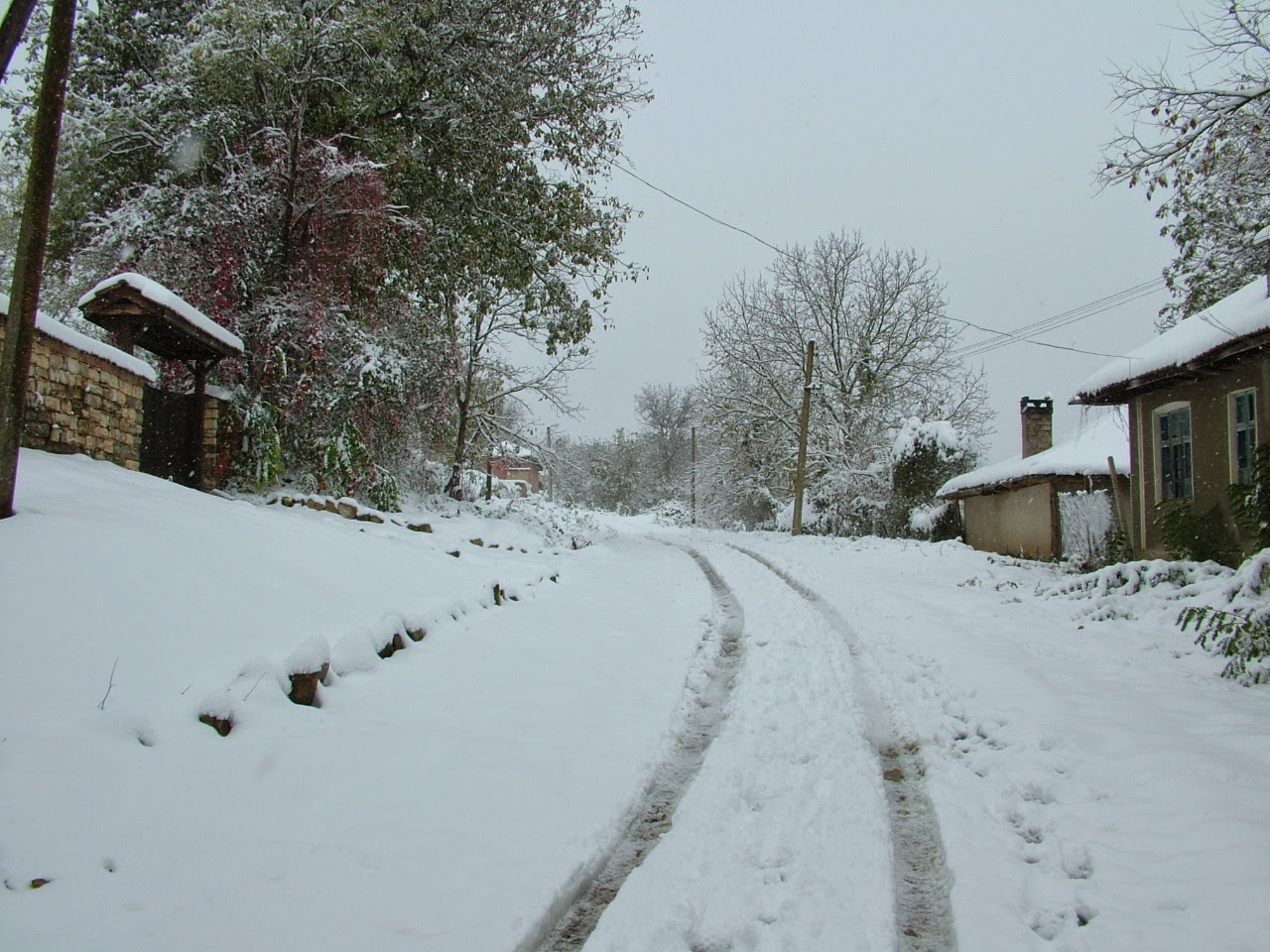 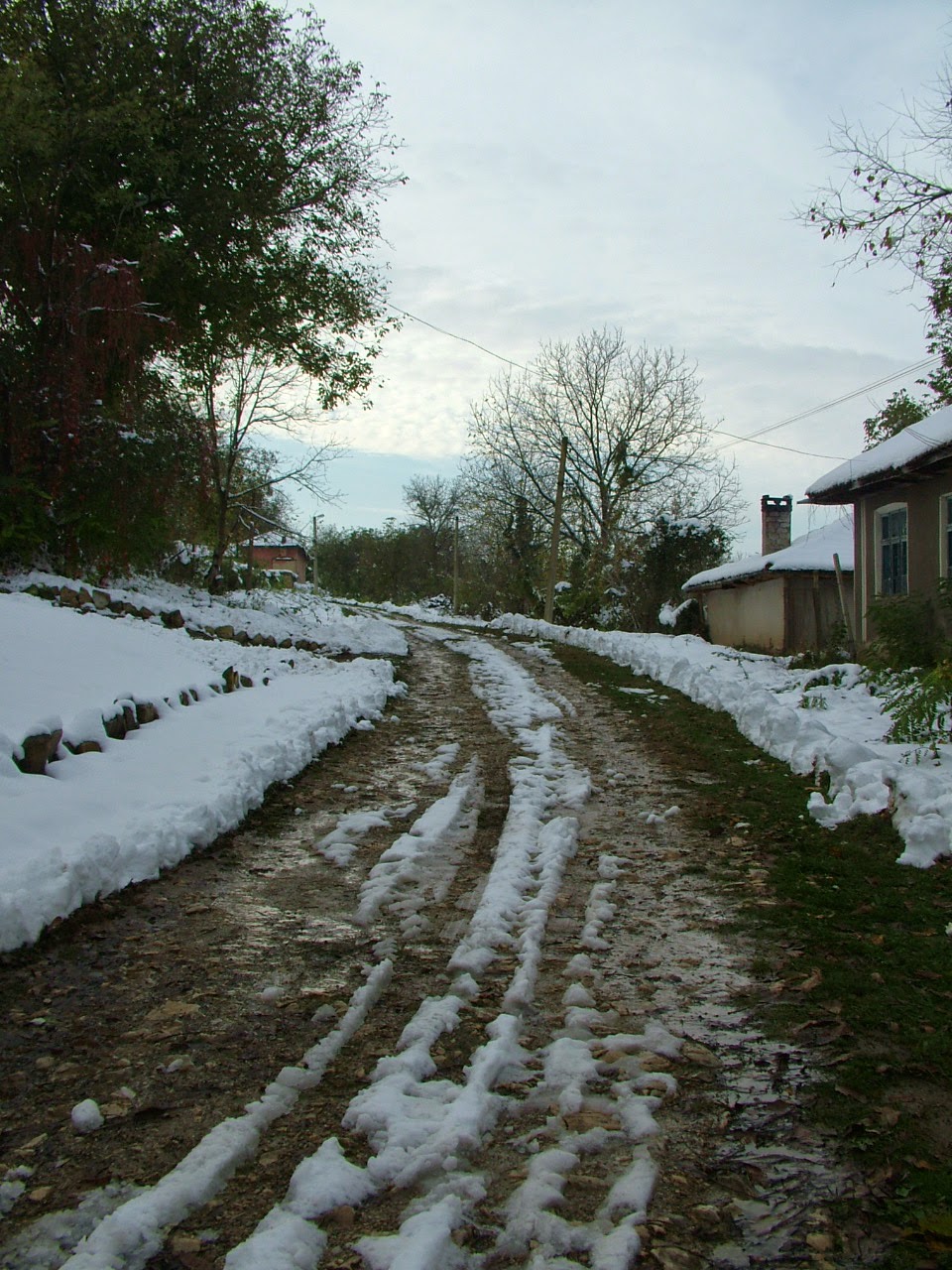 Over the last couple of days the temperatures have certainly been on the rise. I even took the chance of driving down into Draganovo to refill one of our gas bottles. Today I was outside building my wood pile back up without having to wear 93 layers of clothes. To say that it was quite pleasant would be a slight understatement, there were even bees flitting round. Heaven only knows what they expected to feed on. We have been quite lucky so far this winter, we have only had about four nights where the temperatures have dipped down below -15C. So far all of our water pipes have survived, I did have a bit of an ice build up on the kitchen waste pipe as it exits onto a North facing wall, but that have been sorted out now. The thaw has come quite quickly so now the garden is a bit of a boggy mess. If I', unlucky I will be mowing the grass before I realise it. 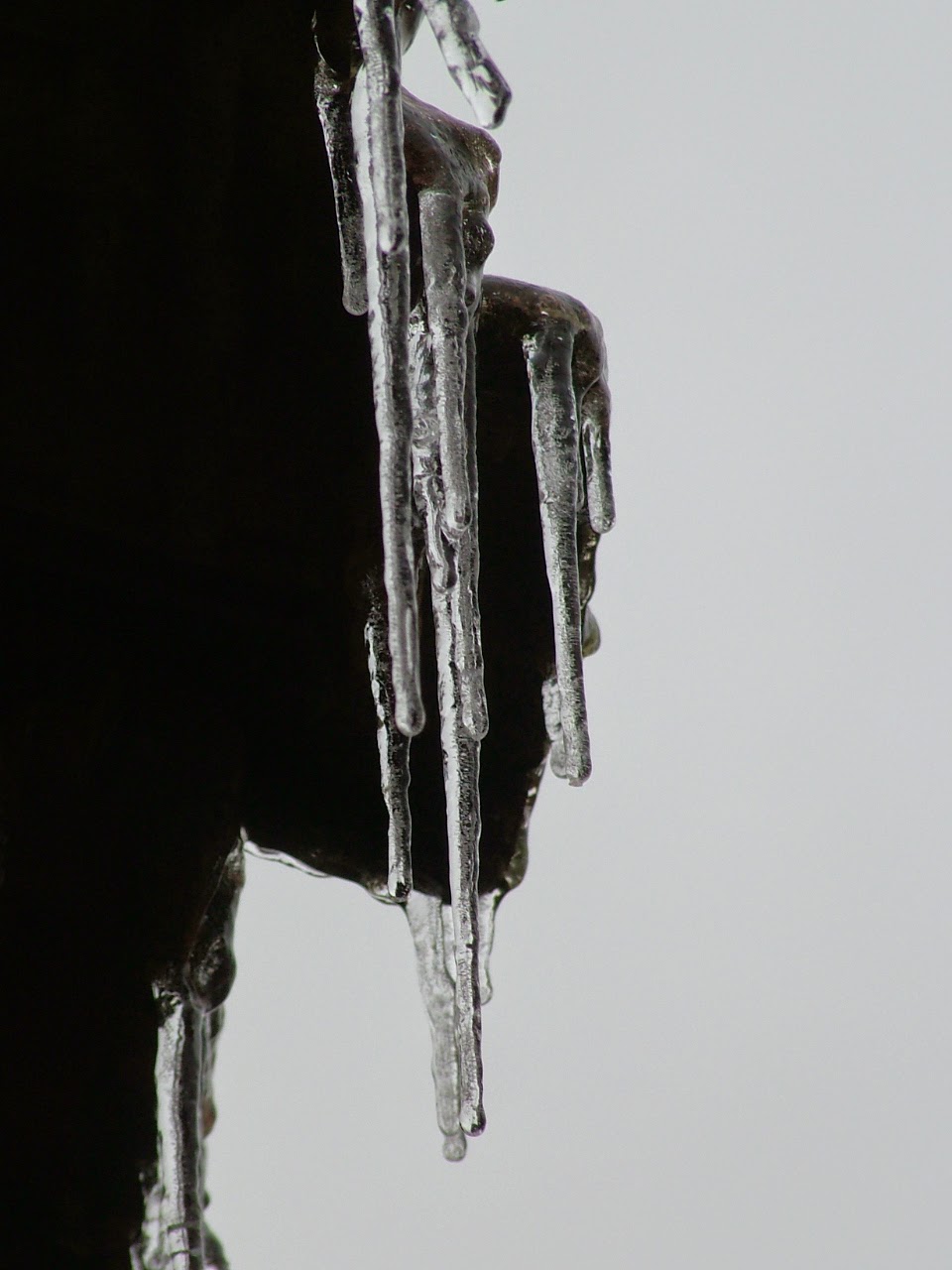 So far this winter has been very pleasant, reading in the warmth of the cellar of an evening with a big mug of coffee, the animals contentedly basking in front of the fire. Each morning I do the log run, and sort the fires out for my bit of winter exercise. Soon we will be back to work in the garden so it is worthwhile recharging the batteries while we have the chance.

As to whether the winter has finished with us, I very much doubt it. Everyday the sun is rising just that little bit earlier, and setting a little later, we have had cloud but we have also had blue skies too. The weather can be a fickle thing. Looking on the bright side of things the Martenitsa stalls will soon be out in the main square of Gorna, and apparently Storks were building a nest in the village last year so hopefully they will return again this year.
Posted by Unknown at 19:42