Every so often we get asked the question, "Why did you move to Bulgaria"? Some of you may well have heard this answer before, but I'm guessing that the majority haven't, until now. 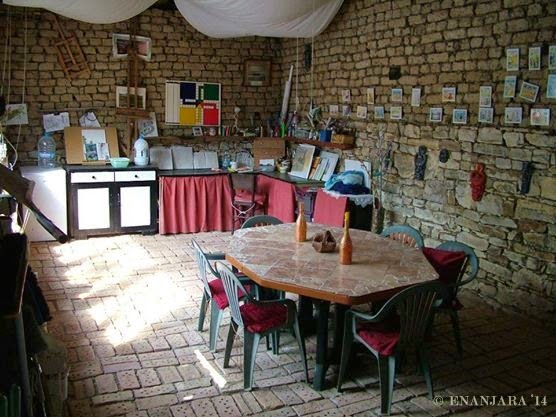 For those of you who don't know me, I served in
the British Armed Forces for 24 years. Once my time was up it would then be time to head into Civvy Street. So a big decision needed to be made about the direction our lives would head. Net has always said that she had no intention of seeing out her days in the UK, so we decided to test the waters and think about living abroad. Others were in the same boat, and through various chats, discussions and idle musings New Zealand started to look a very attractive prospect, and after enquiring at the New Zealand High Commission in London we found that we were acceptable with our qualifications. It was time to get really serious, should we up sticks and move to the other side of the world, away from everything and everyone that we either knew or had known, family included? In the end we decided to shelve the idea temporarily, the deciding factor being that the two youngest children were still in school and it wouldn't be really fair to uproot them and disturb their education. 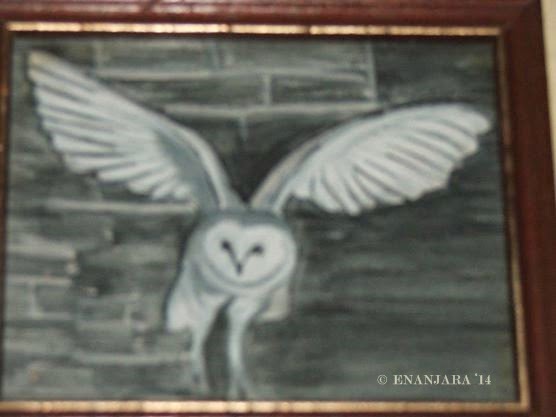 Fast forward a few years, we were both working, the children had grown up, had left school and were leading their own lives. Net started to get painful fingers and pains in her hands. At the Doctor's appointment she was diagnosed with the early stages of arthritis in both hands. Now this was quite a blow to Net as she does like doing her arts and crafts, especially her painting. Through reading various forums and helplines, it seems that its quite common, and is not helped by the damp British weather. So with the main concerns being our quality of life we resurrected our emigration plans, We discussed it with the family, and most said to go for it. So we got back in touch with the NZ High Commission, but they had moved the goalposts and no longer recognised my military qualifications. So undeterred we started looking at other options. 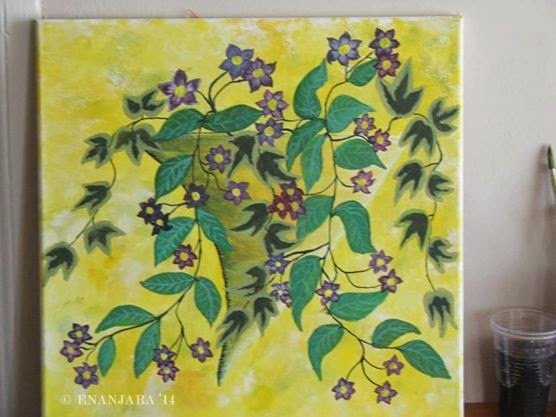 Initially we took quite a broad approach, and nowhere was off limits for our consideration. We looked at Australia, Canada, South Africa and even America. Slowly these places were discounted for one reason or another. Which mainly left Europe. At that time there were various TV programmes on about buying a place abroad, for all I know they might still be shown. Lots of places, which were shown, had plenty of merit, and because they often interviewed others who had made the move you began to get an insight into living a foreign lifestyle. We also got to hear some things which put us off various countries. Northern Europe we didn't really look at, as we felt that the weather would not be overly different to what we were trying to leave behind, and so Net's hands and fingers would not enjoy any benefits. 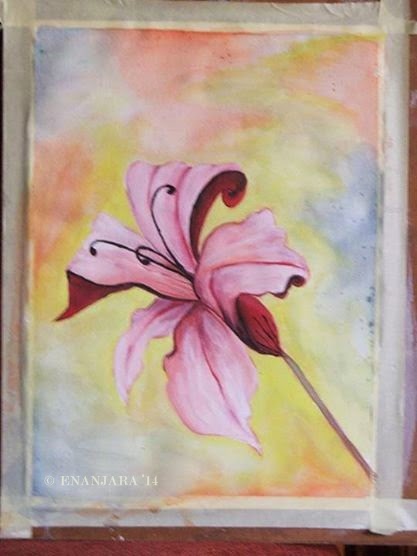 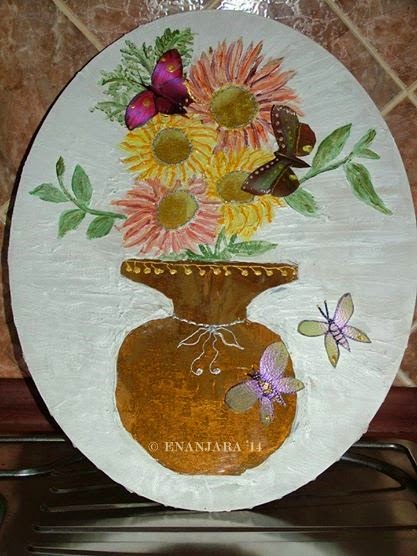 So it was looking more and more like somewhere round the Mediterranean. A friend who was retiring at about that time was enthusiastic about the Greek islands, especially Rhodes. So that made it onto our short list. I quite liked the idea of island living so Corsica, Sicily and Sardinia made it, as well as mainland Italy. Then one afternoon Net watched one of these programmes, and it featured Bulgaria. The first I knew about it was Net phoning me up at work and telling me all about the country which she had just discovered. Up until then my knowledge about Bulgaria was limited to they do some nice stamps, but they have 'funny' writing on them. I could open up an atlas and point to it, and tell you that it was formerly behind the 'Iron Curtain'. 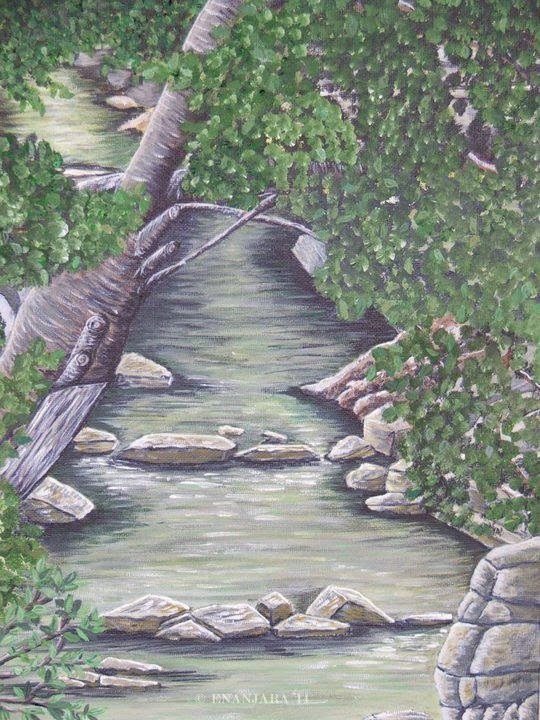 So we joined various forums, and asked question after question. We read up on things, and tried to glean as much information as we could from as many sources as possible. The first thing was deciding where we wanted to live, neither of us are that keen on cities, so that ruled them out. We were already living on the coast in the UK, so we fancied something different. It seemed to be looking like a town or village inland. Despite being able to find the country in an atlas, neither of us had been to Bulgaria before. So our next stage would be to actually go and have a look. We were fortunate enough to deal with a wonderful estate agency. We gave them a list of properties which we were interested in viewing, they sorted out transport to and from the airport and accommodation. Our first experience of Bulgaria was as we came out of the airport and through the shanty town. Now I have been to some less than salubrious places round the world, but it looked awful. If that was an indication of what Bulgaria had to offer, I could see it being a wasted journey. 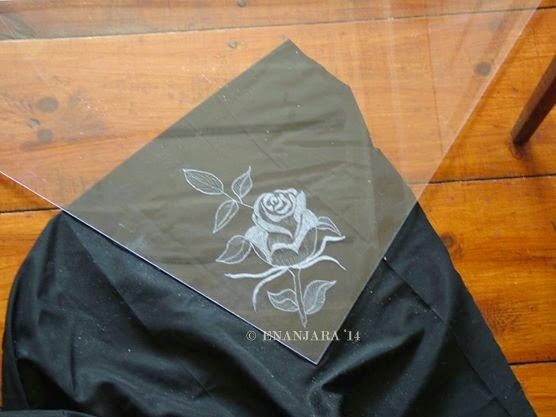 Fortunately once we left Sofia, things became more and more scenic, and I could see Net thinking "I could paint that, and I could paint that". Now maybe I'm a bit of a soft touch but if Net's happy then I'm happy. All thoughts of Sofia's less than desirable area were soon forgotten as we headed towards Veliko Tarnovo, one of the former capitals. Net was as happy as a little sand boy, plenty of history and plenty of different scenery to paint. We had even checked up on the average temperatures, and worked out that when we went across it would be the coldest time of the year. We wanted to see if Net's hands and fingers would be able to cope. Thanks to it being a dry cold they didn't give any problems at all. We even found a very nice house here in the village of Paisii, thanks to the agency, with barns that could be turned into a studio. 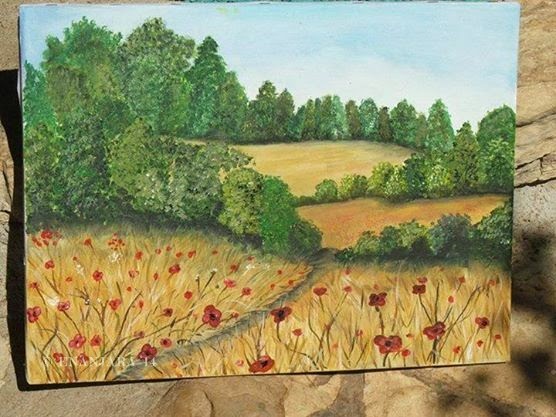 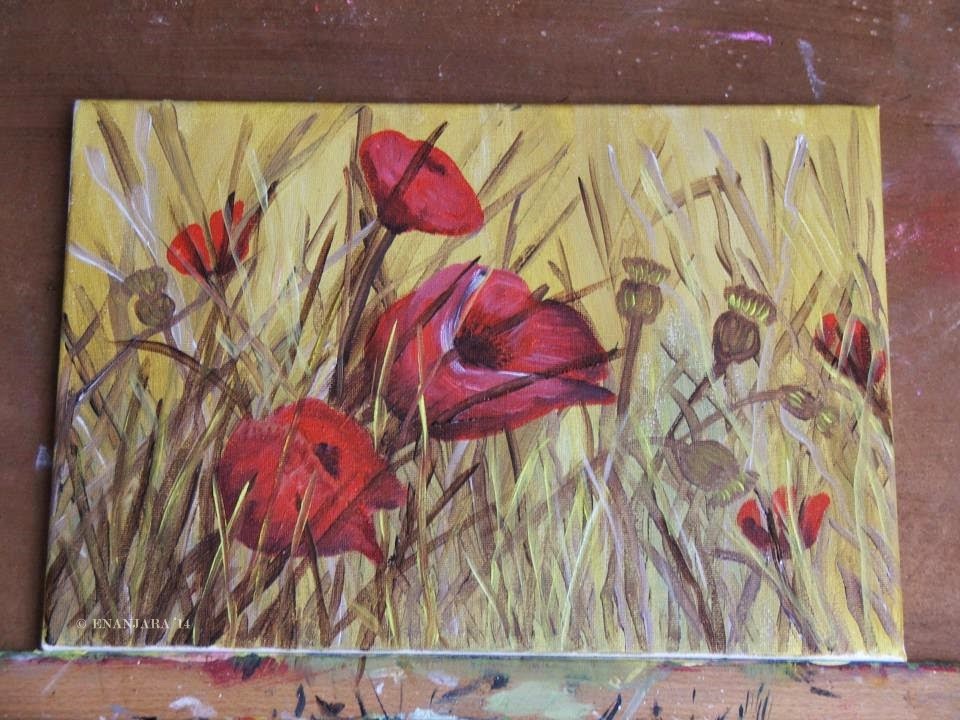 So now we find ourselves fortunate enough to be living in this small village, here in Bulgaria. Net has somewhere to paint during the summer months, with plenty of natural light. On going projects can be left where they are and don't have to be packed away. During the winter its slightly different as most of it gets brought indoors so that the cold doesn't affect it. Mostly Net works with acrylics, and for the first few years trying to find fresh tubes, tubs and pots of the stuff was a bit hit and miss. We have found a small art shop in VT which stocks Winsor & Newton, and Reeves acrylic paints, along with canvases and good quality brushes. Apparently it helps to stick to one type of paint as you know how to thin it, and to work it to achieve the desired results. 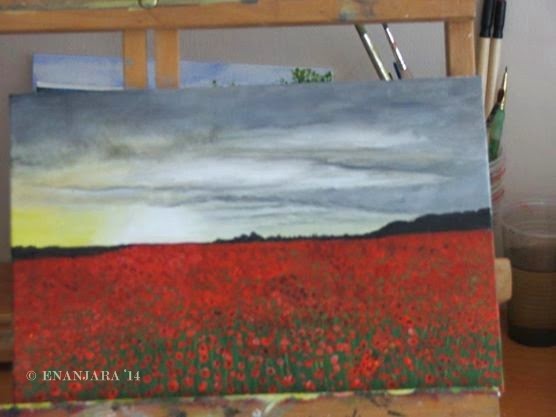 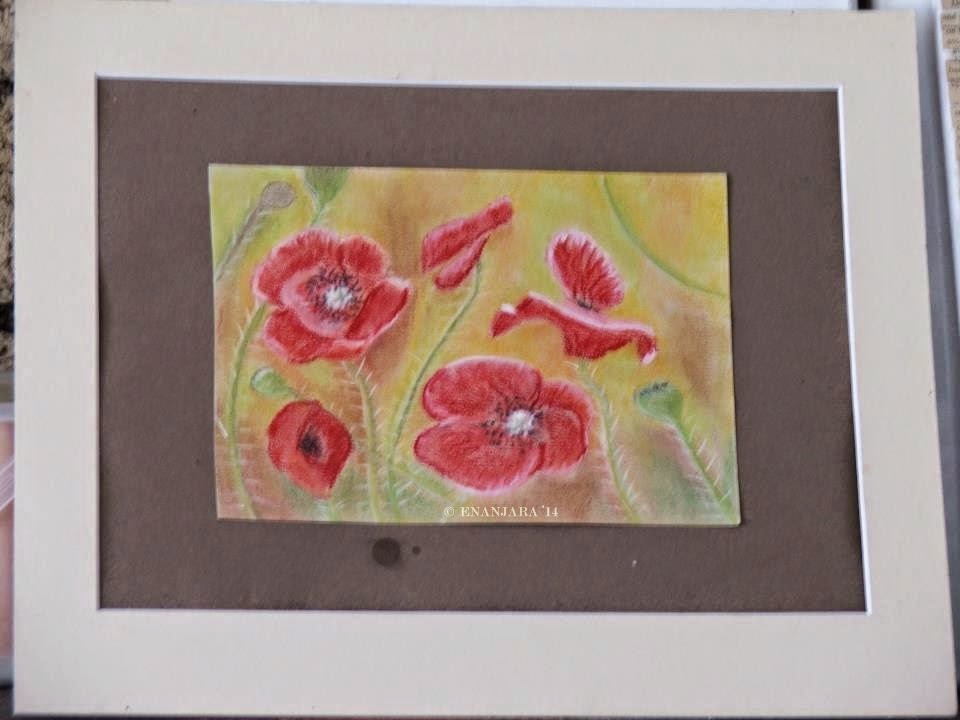 Once upon a time we acted as a host family for foreign students who came to the UK to learn English. Many of them were fascinated to watch Net create one of her paintings. All too often they were badgering Net to allow them to take 'that' painting home as a souvenir. Not only have people paid money to have one of Net's paintings, but people have also commissioned her to paint for them. I think that the furthest Net's paintings have gone is Colombia one way and Hong Kong the other way. 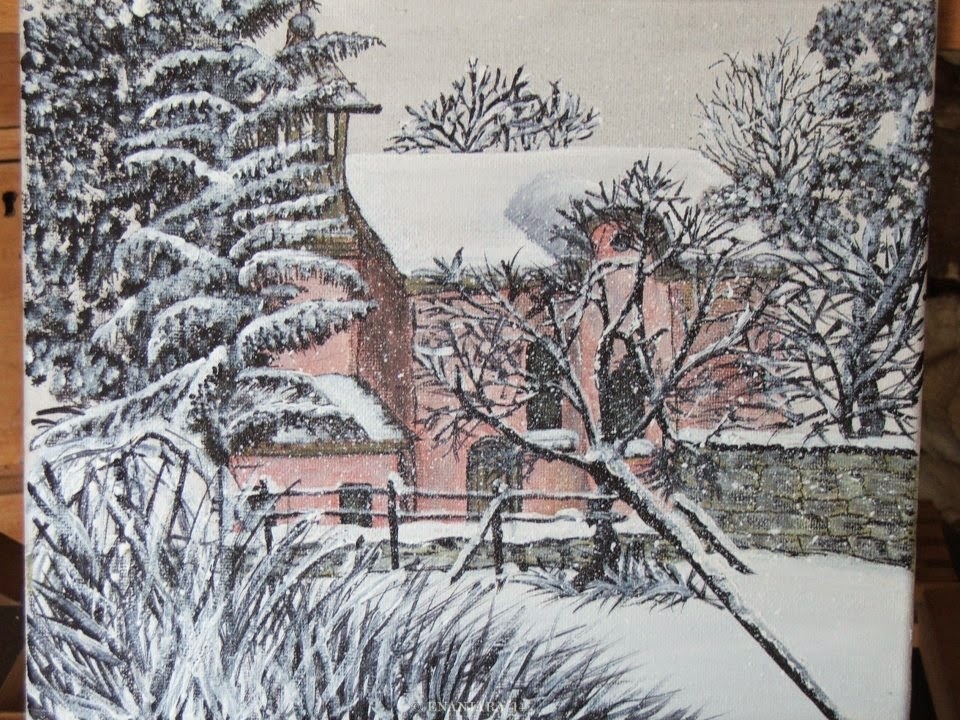 Sometimes Net has offered, or been asked, to donate a painting to be raffled or auctioned for charity. All too often they get given away to friends and neighbours. There is even a set of three paintings by Net hanging in our village Kmet's office. I do have to admit that I love the smell of paints and inks as they are being used or as they are drying. Maybe I associate them with my aunt, as she was one of the last lithographic printers left in England while she was alive. She will be happy knowing that Net still uses her old drawing board, and that out of all her brushes Net still likes to use some of Auntie Rena's battered and mangled ones which we 'rescued' from the bin. 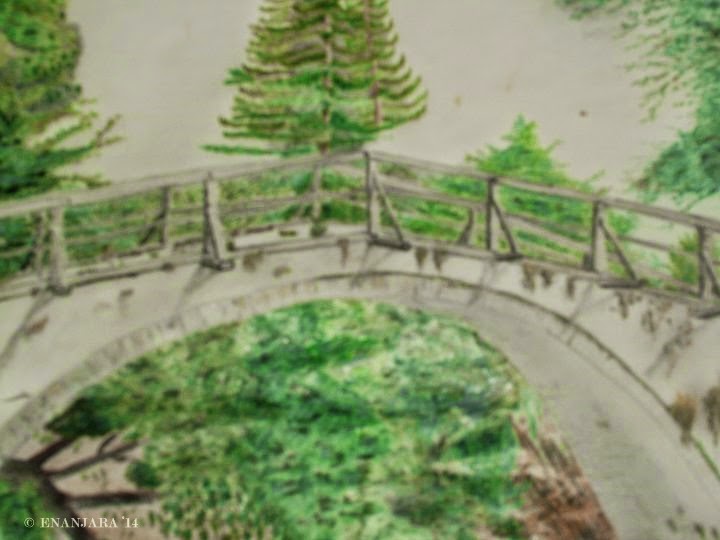 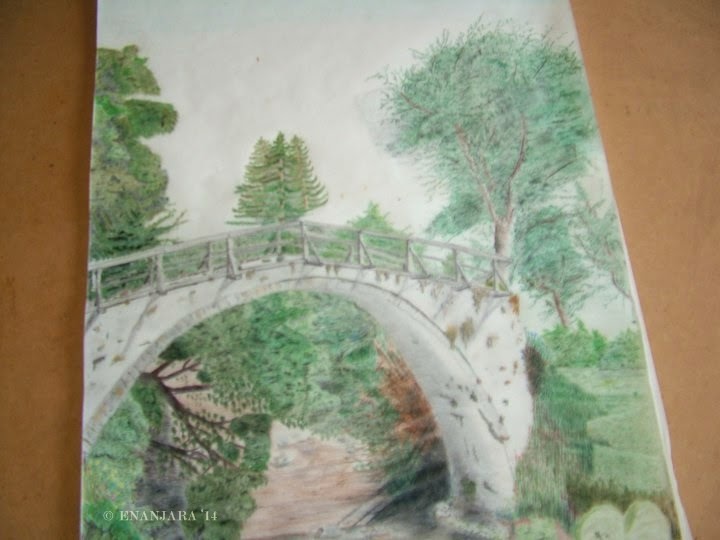 Sometimes I get asked if I paint too, and besides using a six inch paintbrush and a tin of emulsion the answer is unfortunately no. However, on occasion I have been known to pick up pencils and draw. With paint I can never seem to get the colours to merge or to flow how I want them too. If I feel extremely adventurous I will even have a go at pen and ink drawing. Net did try teaching me how to draw with charcoal once, but I ended up with a smudgie mess and looking like I had been cleaning the flue pipes.

The good news is that Net is still enjoying her painting, and that her hands and fingers are an awful better than if we had stayed in the UK. So hopefully that has answered the question for you all.
Posted by Unknown at 15:40