The other day on the Facebook group, The Very Friendly Group For ExPats And Bulgarians, there was quite a lively debate going on about the problems facing Roma integration. As a side issue another question was thrown into the mix. It was "How Well Do The ExPats Think That They Have Integrated Into Their Villages?". I thought that was an excellent question, but unfortunately I don't think that it received the attention that it deserved. It was certainly a question that got me thinking about how we have fared.

At the end of next month we will have been living in this little village for 5 years, so maybe it is time to take stock of the situation. Depending on which map you look at, or even the detail that a map contains, some of you might be able to find this village whereas others will have a problem doing so. This is because the village is so small, and as a description remote doesn't really do it justice. According to 2007 figures there were 202 people living in the village, I think that figure will be slightly lower now as there seem to be more deaths than births. There is definitely something about this village which attracts us foreigners, as round about 10% of the village population, either permanent or holiday home owners, are foreign. Even though there is such a proportion of us foreigners here is doesn't mean to say that we all live in a small enclave, or spend each day in and out of each other's houses at the exclusion of the other villagers.

It has been said that the English are quite lazy when it comes to speaking, or even learning, a foreign language. To be perfectly honest that does often hold true to those still in the UK. Those who have relocated to a foreign country will often make attempts at learning the language. Bulgarian is possibly not the easiest of languages to tackle, and when we left the UK there were no classes available, maybe that has changed now. What we did learn from books and CDs had to be relearned when we got here, as noone could understand the way we pronounced words. I am not suggesting that we are anywhere near fluent, I very much doubt that we ever will be. What seems to make all the difference is that we make the attempt. It really used to annoy me back in the UK whenever I used to hear 'They come over here, why don't they learn to speak the language'. Well now the shoe is on the other foot, but some people find learning another language more difficult than others do. I still make mistakes but I plod on. I have to apologise if I have ever kept people waiting in a cafe or restaurant, even if the waiting staff speak English I insist on ordering in Bulgarian. I think that it helps me, and I must be doing ok as we have never had to eat carpet with a side order of dog biscuits, or something along those lines. In the village magazin we have sat with the locals and had varying levels of success at holding conversations. Sometimes when Rumen is there, if there are problems trying to work out what a word means, we can end up with German and French thrown into the mix.

So when the magazin was open on a more regular basis we used to be quite frequent customers. I have even been invited to go round and watch the football with the owner on previous occasions. Unfortunately they have changed the opening hours and their custom seems to have suffered, and that isn't just ourselves, as people are taking their trade to neighbouring villages, whereas these villages used to come into this one for the same reason. Maybe it is a case of swings and roundabouts, but you can't support your village shop when it is not open. One thing that we can definitely say is that with it being such a small village everyone knows who everyone else is, and there is a nice feeling of neighbourliness. So whenever we meet people as we are wandering round the village everyone is quite happy to stop and chat.

We have made the conscious effort to try and fit in with village life. The villagers grow their own fruit and vegetables, and so do we. Before we came out here there were numerous postings on the various forums about villagers giving you their surplus produce. Since we have been here it has only happened a couple of times, but the village knows that we work our garden in much the same way that they do. Our first summer here and our vegetable plot was the talk of the village. We were growing giant pumpkins, and Nickolai the waterman used to monitor their progress each month, when we harvested them the seeds were going here, there and everywhere.

I keep the grass cut down at the front of our house, and quite often while I am out doing so I get the nod of approval from the Kmet. When Baba was alive I also used to cut the grass at the front of her house. Despite being totally unable to understand a word she would sit outside and natter away, it was quite disappointing when she died. Sometimes it is a bit of a drawback having a garden totally enclosed by walls as village life can pass you by, but it does prevent our dogs going on the rampage round the village.

Some of you will remember the other winter and me appearing on a news item. This was largely down to our Kmet, sometimes I do think that my name has changed as quite a few times when she spots me it is 'Neil tuka, Neil tuka'. At times like that you do feel as though you are actually integrating into the village. In the winter if I think that the roads are too icy I will do the same as the villagers and get the Freddie Krueger bus into town. So for the most part I do think that we are just considered as part of the village, even if we are foreigners. We try to fit into the village way of life, rather than try to make village life fit to us. One thing that we have to remember is that the villagers have been existing this way for allof their lives and we are the new comers.

At other times you do get the impression that as foreigners you do not get invited to, or made aware of, certain events. Take the village day for example. There was a big hoo hah about getting permission to have a pensioners club in the village. People were chipping in with this and that, the ExPats were asked to supply an air conditioning unit. Then we were asked for additional funds to pay for fitting it. Since then we have been invited to the pensioner's club on 3 occasions. Once for a village day, once for another celebration and once for a pensioner's club meeting. I have also pointed out that the ExPat wheelie bins are targetted by the bin baggers. The village Roma are not shy about coming forward and asking for handouts, although thankfully not all of them. Some do just want to get on with their own lives but will help out if you need them, others if you give them an inch they will take a mile. 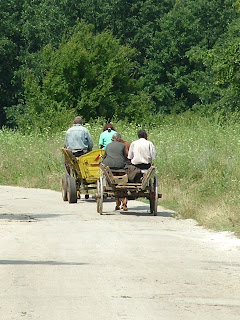 So the question was about whether we feel that we have integrated into the village. The answer has to be both yes and no. I can now go round to the Post Office or the magazin and get what I need, chat with neighbours that I meet, all without speaking any English. We are known in the village, and the Kmet and her predecessor seem to think we are ok, Nickolai the waterman is a very quiet man but happily chats to us. Amy, Saeed and their two children keep a watchful eye on our house, and only ever ask us for anything in the direst of emergencies. They get our surplus produce and first refusal on anything we have grown out of or no longer need, we occasionally get eggs and fresh banitsa's. If people are waiting for the bus to go into town we have stopped to give lifts. On the down side we have been ripped off, but that was maybe just us being a bit naive. As foreigners we do often feel that we get overlooked, but sometimes it is difficult to integrate into a village where nothing really happens or changes on a day to day basis. The good news is that this village does feel like home and I wouldn't swap it to return to anywhere in the UK, so the village is stuck with us. No matter how hard I try I just can't get to like the music though. Thankfully the internet is now much better and UK radio can be streamed through the computer, so at the moment I am listening to Steve Wright in the Afternoon on Radio 2.

Well this is blog number 99 and I am still open to suggestions if people want anything particular covered in the next blog. I would also like to say a quick hello to Bev the latest blog follower. :o)
Posted by Unknown at 16:30