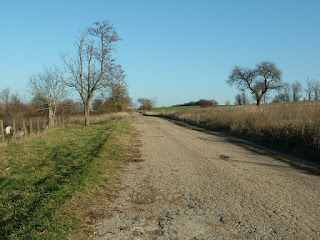 So we come to the end of November, and still no sign of the dreaded snow word. The closest that we have come to snow has been to wake up to a few frosts in the morning. Today is a real surprise, I have checked my thermometers outside and it is 21C, and this isn't even in the sun. We now have a full line of washing out drying, even the breeze yesterday morning had a warm feel to it. In one way we did make up for it last night, as we had a wonderful thunderstorm and the rain did come down like stair rods. One thing that we do get at this time of year is a fair bit of fog, but fortunately this has normally burnt off by mid morning.

As is usual at this time of year we have had to do certain things to get ready for the onset of winter. Wood for the fires has been cut and stacked, we have been up in the attic checking for damaged tiles and any possible leaks. While we were up there we have also laid out even more of the rolls of insulation. We have also been down to Yolanta's and given a hand there too. All of the petchka's and their associated pipework have been cleaned. To some it might seem as if this is being carried out far too early, but last year we had snow on the ground in October, other years we have managed to get up to Christmas morning before the snow has arrived. So no year is the same as another, as it does pay to get yourselves sorted out early rather than rush things. Our winter preparations are nearly complete now, the freezers are full, the cupboards are full, we have a healthy stock pile of animal food, we have even managed to get elasticated crampon type things that will slip on over shoes and let us walk round a lot easier. One of the last things left to get on my list  is a replacement snow shovel as I managed to kill mine last winter.

We have also helped some very good friends do various bits and pieces to their home too. It is surprising what can be achieved if people pitch in and help each other. These lovely people now not only have a wood store, but I feel sure that it can double up as a nuclear bunker should the need arise. It even took the weight of two of us up on the roof, so I don't imagine that the weight of snow will cause too many problems. 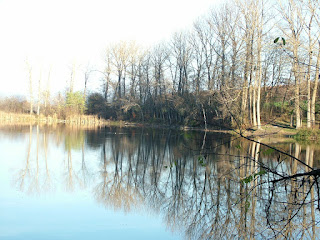 Despite these preparations we have still managed to get out and walk round the village in the sunshine. It was quite pleasant doing this as you end up in places that you can't get to in a car. For example we managed to walk all of the way round a lake on the outskirts of the village. The only downside was the amount of rubbish that we found just dumped there. The worst of it being that it can only have come from  the villagers themselves, as this lake is largely hidden. Sometimes they fail to see just what they are ruining. Maybe in time they will learn, but in the meantime they might follow our example and take their rubbish home with them, hopefully this won't be too difficult for them to understand otherwise there will be nothing left for future generations. 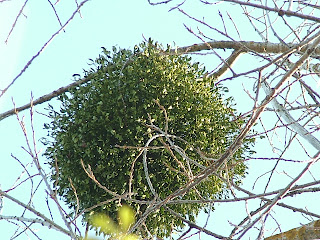 When we went on one of our walks we did meet a couple of Bulgarians from a neighbouring village who were out mushrooming. It just goes to prove that a lot of the villages are interconnected by small tracks and trails, and not just by roads. One thing that I did spot on one of our walks, was something that I didn't even see very often back in the UK. At the top of a tall tree was a ball of mistletoe. I can't remember if I have seen sprigs of mistletoe sold on Bulgarian markets, so I can not comment about whether it holds the same position in winter lore as in the UK. Even if it is not the case then it is an alternate source of food for the birds. I am pleased to report that there has been no repetition of last year's visitor from the plant pots, but we have asked the cats to keep an eye out just in case. 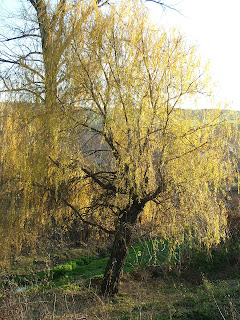 Sometimes it does seem hard to believe that all of this will soon be under a coating of snow. If we are lucky the winter will not be as prolonged as the previous one, or that the temperature will plummet quite so far. Whatever happens we will be prepared for whatever happens, and if I am lucky I might not be interviewed by  any odd TV news team that might be about this time round.
Posted by Unknown at 15:11