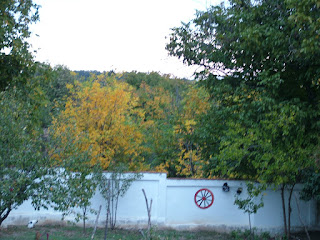 Now here we are mid way through October and it has got much more Autumnal. Even though the colours are mainly just greens and golds at the moment. When the wind blows through the trees there are sudden flurries of falling leaves, as they clatter their way to the ground. There is the normal battle of trying to keep the leaves raked up, and as you go around the village there are plenty of mounds of smouldering leaves. The wood lorries have been doing their rounds and delivering people's winter firewood. Here we get the wood in metre lengths, and it is up to us to get it cut and split. My chain saw has decided that now would be a good time to pack up, so we have had one of the locals in to saw the wood up into cheeses for us. I am quite happy splitting it, there seems to be something quite satisfying, and therapeutic, about log splitting. Even in the depths of winter I find it good exercise to split a few logs. I have quite a nice pile of split logs growing, and as I fill the log baskets up I intend to split some more to replace those used. 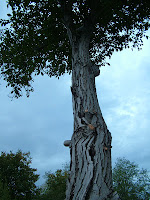 Our neighbour Dencho seems to have got a bit carried away pruning some Walnut trees. I thought that they were protected, but maybe pruning them is ok, and you have to obtain permission to actually cut one down. Most of them we haven't had a problem with, but one of them, even he has previously told us, stands on our land. Not only that but when he 'trimmed' it the branch damaged the corner of our barn. I eventually managed to catch up with him and pointed this out, but this was met with the traditional Bulgarian shrug of the shoulders. The next day his son was in the field cutting the branches up, I pointed out the problem and the damage to the barn, again I got the shoulder shrug. I wrote out my points of concern, and then used Google translate (which I realise isn't wonderful) and then showed it to Dencho's son. Once again the shoulders were shrugged. Even though it was a Saturday me and my piece of paper went round to the Kmet's house. I don't know what she said or did, but half an hour later Dencho's son is knocking on the gate with his mobile. He had got a friend to translate for him, he said that the roof of the barn would be fixed, and that our walnut tree causes too much shade in the field where they want to grow fruit trees. I explained that was all well and good but if the tree is ours then shouldn't we have been consulted first. I would even have given a hand. He tried telling me the tree was his, but thanks to the sketch the tree is actually within our boundaries. I pointed out that as a foreign national I had to form a company to buy the land on which my house sits, so therefore anything on the land is a company asset. 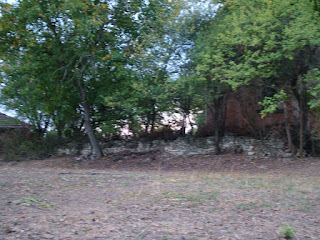 Anyway Dencho and his son have now got a nice clear field, surrounded to the South and East by Walnut trees that look like they have come out of a Dr Seuss book. We have both got some firewood from the tree branches, and the barn roof has been repaired. So much of this could have been sorted out over a coffee before the chain saw massacre took place. Hopefully we will not suffer too much with the natural windbreak no longer being there, I am sure that we will find out soon enough. We have fared ok with the first rains in I don't know how long, and hopefully we will do the same when the snow arrives. This time last year we had already received our first snowfall. 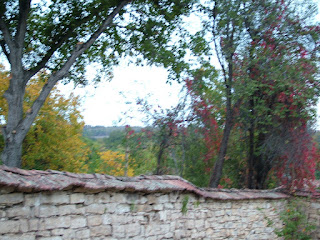 Like everyone else in the village there are certain tasks that have to be carried out, otherwise the winter will catch us on the hop. It's silly things like getting up on the roof and checking for damaged tiles, and replacing them. The chimneys and flue pipes also need to be swept, and any damaged piece of flue replaced. Whenever I do this job I always seem to end up looking like an extra from the Black and White Minstrel Show. I must be showing my age being able to remember things like that. The garden also has to be sorted out, with a lot of the old bits and pieces removed, various bits lifted for storing over winter, and other bits. I always find that it is better to just do as I am told, otherwise I would be lifting weeds for over wintering. 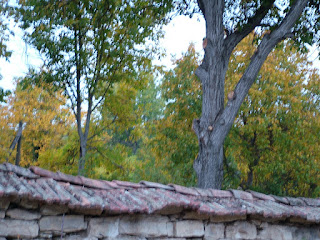 It is still a nice time of year, and the countryside is constantly changing. The daytime temperatures are still quite good, and we haven't woken up to frosts yet. We have had a couple of foggy mornings where the fields have not emerged from the murk until nearly lunchtime. You can still hear the steady chug and wheeze of tractors as they work the fields, and even though you can't see them the roosters have been in fine voice. The only downside to this time of year is that it always comes before the winter. If we are lucky it will be better than the last one. People are already forecasting another harsh winter, I can't see how they can manage this, as each year the winters have been different. So at the moment no one can really say how severe our fifth winter is going to be, or even how long it will last. Maybe we will be lucky and have a little snow, and plenty of sunny days. It would be nice but somehow I doubt it.