As We Go Into September 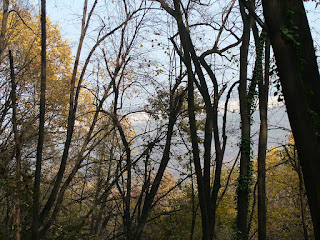 Well we are now nearly midway through September, and even though the days are still sunny, the evening temperatures are definitely dropping. During the day we are still facing temperatures in the 30s, but at night we are down to about 15C. That might sound warm to those still in the UK but because we have got so used to the temperatures in the midst of the summer, it does feel quite nippy of a night time.

The trees are starting to take on an autumnal hue, now whether this is due to the time of year or that they have had so little water through the summer is anyone's guess. Whatever the cause there are now starting to be drifts of leaves at the road side. I have noticed the days are getting shorter too, we left Gorna in daylight yesterday, but it was dark by the time we got home. There didn't even seem to be any real twilight, it was light and then it wasn't. It even seemed to catch a lot of the wildlife out too.

So the summer seems to be losing its grip on the country, the summer Olympics, and Paralympics, are now finished for another four years. The football seasons have kicked off again, in both the UK and over here. Farmers are busy in their fields, and quite often you get stuck behind a lorry, carrying grain or wood, as it drives round the back lanes. Well it seems to be lorries or farm vehicles at the moment. The trees all seem quite laden with fruit ad nuts at the moment. It might have taken nearly 4 years but I have finally managed to pick, and eat, a peach from one of the trees in our garden.

The fruit trees about the village will soon be battered by the local gypsies, as they try to gather up as much fruit as they can. It wouldn't be so bad if it was for their own consumption but they sell it on for a pittance. It is the same with the walnuts. If ever you see the locals hands at this time of year, you would think that they have all been doing oil changes on the village tractors, but they have been shelling the walnuts. We have already been approached about the nuts in the trees surrounding our house. 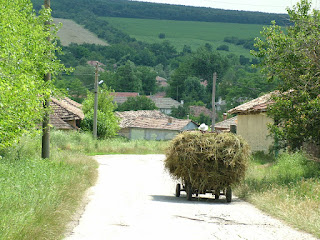 The winter fodder for the animals is also being collected up and put into storage ready for the winter. At least the weather is that much cooler so at least you can get out and about and do things. We have learnt to start to adopt a siege type mentality round about this time of year. Down at the fruit and vegetable market as things come into season the price drops, so we stock up and freeze a lot. At least this means that we do have access to fruit and veg when we get snowed in up on top of our hill. Some things like the basic bread, eggs and milk we can get round at the local magazin, other things like pet food we can't. So we will shortly be doubling up on certain grocery items. It might sound a bit early to be doing things, but winter doesn't always give you advance warning before its arrival.

Our wood pile has been drying out since this time last year, and has now been cut up into cheeses. This means that come the winter while Net is indoors doing the housework, I am getting some exercise splitting logs for the fires. I think that the animals are already eyeing up their spots in front of the fires. It does seem to be worthwhile doing a winter job a week at this time of year, at least everything isn't going to be such a rush when you don't need it to be.

So soon we will be able to look forward to the smell of wood smoke on the evening air. If we get any rain then we will always get mist and fog up on the hill. So soon it will be a case of putting the shorts and t-shirts away for another year, and digging out the warmer clothes.

Before I forget I would like to welcome John, who has just started to follow these Blogs. A pleasure to have you here with us all. Once again thank you all for taking the time to read these Blogs, please feel free to pass the link on to any friends who you feel might like to read them. The more the merrier :o)