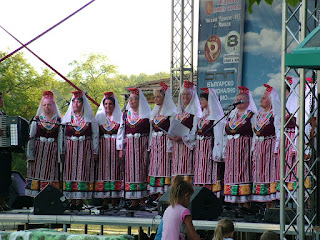 This has been a busy weekend musically, in Veliko Turnovo there was another Moto Rock Fest, but at the same time in Mindya there was also their Rock Fest. As we are possibly the same distance from the two the choice was ours. We decided on Mindya, mainly for the reason that we went there last year, and we both thought that it was brilliant. This year didn't disappoint either, but we went on the Friday this time and not the Saturday. Maybe next year we will take in both days, but it was the thought of driving there in this heat that was a bit off putting this year.

For those that have never been to Mindya, it is a village that lies to the South East of Veliko Turnovo. The times that I have been there it has always struck me that it is quite a bustling village. There certainly seems to be a certain amount of civic pride in this village. The kerb stones are painted, as are the bases of the lamp posts, and I couldn't see any sign of litter. Even at the start of the Rock Fest the Kmet made a speech welcoming everyone to the village and hoping that everyone would enjoy themselves. We were then treated to the ladies village choir. For some it might not be rock and roll, but they deserve as much time on the stage as anyone else, besides which they had probably all been busy getting the village ready in the lead up to the festival, it also shows that it really is for everyone. Even though there is a Police presence there at the festival they don't actually have anything to really do. 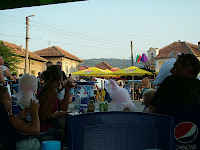 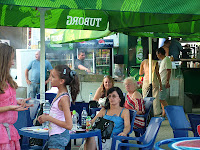 As I have previously mentioned the Rock Fest is enjoyed by everyone, and age is certainly not a barrier to any enjoyment. There were certainly plenty of young children, some in pushchairs, enjoying the music. There were also plenty of ageing men with their hair tied back in a pony tail. Hopefully that will be one look that I never try and imitate, despite someone trying to convince me otherwise. We had arranged to meet people there, but with one thing or another Barb and Dave were the only ones who actually made it. Considering they had never been before they must have been following some excellent directions, as even though they arrived well over an hour after us they had managed to park directly behind us. 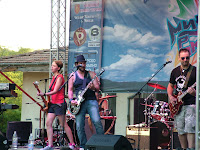 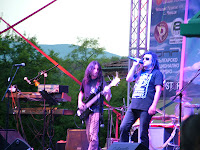 The bands were what everyone had come to see, and on Friday they didn't disappoint. We thoroughly enjoyed ourselves, and should anyone wonder if the next one would be worth going to I would say that judging by the two times that we have been most definitely. As foreigners, the groups might not be exactly household names for us, but they are enthusiastic about their music and this is a great venue for them to perform in front of sizeable crowds. that is one thing about the Mindya Rock Fest, you don't actually notice the numbers swelling. One minute it seems quite empty and the next someone has just bumped into you, at least we were not all wedged in like sardines. 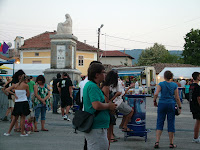 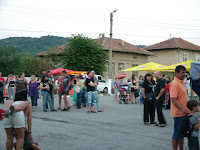 You also don't seem to notice the time either. At one point we were convinced that it must have been about 9pm, in actual fact it turned out to be about 7.30. It did start to feel less sticky once a slight breeze had sprung up, and at least it did waft some of the cooking smells away from us. I am convinced that someone, somewhere there was cooking fish, not that I looked too keenly for it. 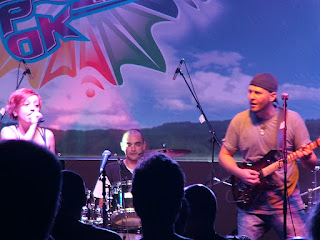 There was an interesting mix of music, the majority of the UK/US music being familiar, but there was also some Bulgarian and what sounded like German music being performed as well. The sound engineers certainly had their work cut out for themselves with so many different bands performing, and they would each have had different levels. Even the music that was being played between the bands was enjoyable, I even heard The Knack's "My Sharonna" at one point. One thing that I did notice was that members from different bands were also enjoying what the performing band were doing. So there didn't seem to be any petty jealousies, which certainly makes a pleasant change to the UK and stupid rivalries. I'm not sure who it was, but I think that it was Nana and the Gang who covered part of Pink Floyd's The Wall, for me that was one of the highlights of the evening. 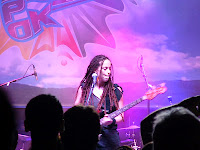 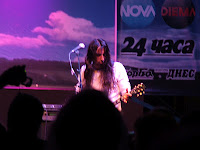 It would be wrong to try and say which was the best band of the evening, as music is all about individual taste. You either like something or you don't. What can be safely said is that all that went to the festival on Friday, be they members of a band, or Joe Public, enjoyed themselves. Some people in the UK might find it hard to believe but this Festival was free. There was no trouble that we saw, and yes there were people drinking. 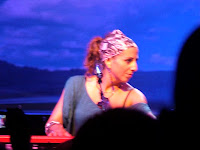 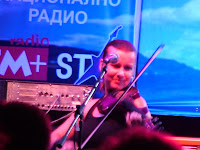 Maybe this is something that the UK can learn from? One thing we did notice as we drove home was the Police were starting to set up a breathalyser stop just as you left the village to join the main road. The young policeman who flagged us down did seem a bit confused as we were in a right hand drive. We were asked if we had been drinking alcohol, to which we replied no and we were just waved on. just goes to prove that sometimes you can have a great night out without drinking anything stronger than Pepsi Twist.

If the Rock Fest is on again next year we intend going, and who knows we might even end up taking in both days. We would like to say a very big thank you to the organisers, the bands, the Kmet and the villagers of Mindya, that was an excellent Friday night.