August Has Been A Bit Warm 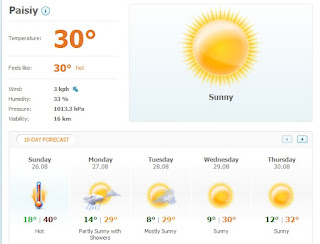 With any luck today should be the last day of these scorching temperatures. This might sound a bit strange for those reading this blog in the UK. However, for those of us out here in Bulgaria it makes perfect sense. It seems as though we have been battling these temperatures for about three months now, but in reality it will prove to be shorter. We have had the occasional respite from this weather, but not many. As with a lot of Southern Europe there have been various brush fires cropping up, and once these get hold are very difficult to put out. They have even halted HGVs from using the roads during the heat of the day, as they have just been trashing them. Maybe it is something to do with the way that roads are constructed here. Talking of which there is a big road repair programme going on at the moment, we have noticed that the road between Strelets and us has been repaired, also the road through Strelets itself has been patched. Here in Paisii we are still waiting, they might have got round to us by the winter but I am not holding out too much hope. The garden is quite knackered now, as plants and vegetables have succumbed to the heat. You can only water it so much, maybe the ground has heated up so much that the roots have ended up being partially boiled when I have watered. We are still surviving without air conditioning, we have some ceiling fans and some oscillating fans, but our main area of comfort is our cellar lounge. As this is largely underground it does stay nice and cool.

The idea of long sunny days might sound wonderful, but it can get a little bit repetitive. The ground is so dry and cracked that it will take more than a couple of days rain rain to sort out. I do enjoy the sunshine and it doesn't really cause too many problems if you are sensible. We are trying to do the same as the rest of the village when tackling outside jobs, they either get done first thing in the morning or as the heat is going out of the day in the late afternoon. Even if we have to go and get some shopping we are now going into town later in the day. If you do venture in during the day you will quite often find that it resembles a ghost town from an old western. Even the stray dogs disappear as they try to find some shade, the good news for them is that with the number of public drinking fountains there is always enough water for them to drink.

Mentioning which we have also noticed that the water level in one of our local lakes has nearly got down to last year's low level already. It is not unusual to see a whole herd of cows wallowing in the waters there, the only down side to that is we have a sneaking suspicion that this lake forms the bulk of the two village's water supplies. I hope that Nikolai has enough chemicals to see us through the rest of the summer. People are already preparing for the winter weather though, as they get their stocks of winter firewood in. Even my chain saw is in having an annual service done on it, and then in slow time I will be cutting up the logs ready.

The dogs have taken to digging small hollows to snuggle down in, and then when it gets a bit warmer they move up under the barns and into the shade. About half an hour after we have gone in and down to the cellar we will hear the click click click of dog claws on wooden floors. That will be Fenny as he has taught himself to open the gates and door. If he hasn't been put back outside after about half an hour Sirius will also come and join us. The only ones who don't seem overly concerned about the heat are the cats, but they will have found somewhere nice and cool to rest up in during the day. Sometimes it is a bit of a worry with the cats being so independent, as just recently the hunters have been out trying to get a Wolf that has appeared round the village. You know that you are out in the middle of nowhere when you get to see a lot of the local wildlife, our highlight so far has been a pair of wild boar, typically neither of us had a camera handy.

Sometimes you can't help but go out, and on these times you try and get as much done as possible. We have now sourced a different venue for next year's It's A Knockout games. Well we did say that it wasn't going to be a one off event, but an ongoing project. We have also been to the printers to see about getting a calendar made for next year, all proceeds are going to BinkyAid. While I remember next year's fund raising is going to be used to help the Yambol area. If anyone would like their area considered then please get in touch with a committee member on the BinkyAid website.

Looking at the stats for this blog I notice that it has been accessed over 5000 times, so I would like to say a very big thank you to all who have taken the time and trouble to read our ramblings.