A few months ago we were asked if we could possibly arrange a car treasure hunt, this was by one of our Bulgarian friends. We said of course we could, thinking that it would be an easy thing to do, we soon found out differently. First we had to work out a rough route, with both a start and finish point. We decided to go for somewhere that everybody knew, so we opted to use the VT camp site. Poor Nick and Nicky must be getting fed up with the sight of us. So using Dragizhevo as both the start and end point, it was a matter of consulting the map to work out a circular route. With the route roughly plotted we then had to drive it ourselves looking for suitable clues as we went. It took in several villages that even we hadn't been to before, but we had to make sure that the route itself was drivable, and didn't end up disappearing into some goat track into the middle of nowhere. As we went round Net had a notepad and was busily writing down possible clues, and their answers. 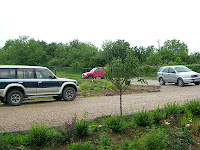 With the route, clues and answers I then had to type them out in a logical form. We couldn't really use cryptic clues, as we weren't sure how any Bulgarian teams would fare with these, so decided to keep the clues and directions straightforward. Once I had typed them out, it was then a matter of reading through them all, and with the map ensure that it all made sense. My next task was to get them translated into Bulgarian. I asked our lovely friend Bianka if she could spare the time to help us out. Bless her she did all of the translating for us, not only for the questions, but also for the poster that we did to advertise the event. Question sheets were printed out in both English and Bulgarian, team numbers were printed up, along with time sheets and score sheets. 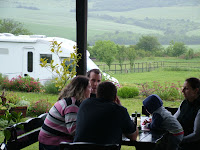 Now if any of you have read my previous blog, you will be aware that we have been having some rather damp and inclement weather. We were in two minds as to whether to postpone the treasure hunt, but looking at the forecast for Saturday, it said that there were possibilities of showers, so we decided to go ahead with it. Armed and ready with all the necessary bits and pieces we set off for the camp site, so that we could get ourselves organised. Net took her laptop, so that we could keep everyone in Facebook land  aware of what was going on. The only problem being that we couldn't get the damn thing to recognise the network, Net tried, I tried and even Nick tried, but the laptop just wasn't cooperating. Eventually I managed to get it to actually link up to the campsite's network. Round about this time the sun started to come out, and  first team turned up so it was then a matter of explaining the rules and bits and pieces to them. 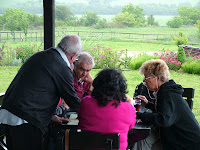 At the designated time of 1230 the first team was off, and heading into the great unknown. The teams were set off at five minute intervals to prevent congestion. It wouldn't have really mattered as only 6 teams actually turned up for the event, which was a bit disappointing after all of the work that we had put into it. So all of the teams had departed by 1 o'clock, leaving Net and I to drink coffee and await any problems. Sure enough we did get a text message from one team saying that they were tired and wouldn't be completing the course. That wasn't really surprising as they had been moving a lot of timber the previous day. So that left only five teams to worry about as they travelled the minor roads of Bulgaria, on their hunt for the answers to the clues. 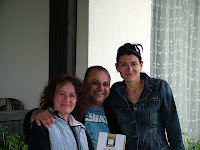 After 2 hours and 35 minutes the first team reported back in, closely followed by the next team. They were only separated by just 3 minutes. It was the two Bulgarian teams fighting it out to be the winning team time wise as they both had the same score with their answers. So the winners for the fastest team going round the route were our friend Katia and her team. Funnily enough it was Katia who had originally asked about the possibility of a treasure hunt in the first place. So well done to them. Soon the ExPat teams started to return, even though they might not get the fastest time, it was all to play for with the most answers correct. One of the questions I had to discount, as the answer had been removed between the time of us setting the questions, and the day of the treasure hunt. All of the answer sheets were getting very close, but it eventually came down to John and Sue, and their American friends who were victorious. 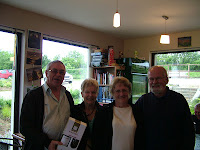 Despite it not being as well supported as we had hoped, we were somewhat reassured to hear that those who took part enjoyed themselves. They must have done as we have been asked if there is any possibility of us setting another one later in the year.

So it just remains for me to thank all of those who took part, a very big thank you to Nick and Nicky at the campsite, not only for putting up with us once again, but for also supplying the prizes. Before I forget I am meant to be doing an interview on Trust Global Radio on Tuesday, maybe that could be the subject of another blog.
Posted by Unknown at 15:22