So Here We Are In June

June is now finally with us, and so far the rain seems to have disappeared for a while. Someone somewhere certainly seems to have turned the heat up too. These past few days have been glorious, wall to wall sunshine, and what rain we have had seems to have confined itself to the evenings and night time. It has meant that we have finally been able to get out in the garden and tackle some much needed weeding, and the grass has all been cut again.

This has not been the limit of our activities though. It was on Tuesday that I made my first appearance on Trust Global Radio, talking about this summer's It's A Knock-out Olympic Challenge. I have to admit to feeling a wee bit nervous before I went on air, although that might have been down to the coffee that I had been drinking earlier. My first experience was doing the sound level check, and then about half an hour later I was live on air with Bobby Martin. I have to say that Bobby did make it very easy for me, and quite a few people have said that they enjoyed the interview. I certainly hope so as I am back on the radio on Tuesday, as I will be every week in the run up to the Games. The good news is that we now have eight confirmed teams, with at least another two possibles. So maybe I did do something right, as the interest has really taken off. We appreciate all of the support, time and energy that people are putting into this, and we all feel that this is a very worthy cause. Some of you might not be able to make the Games but would still like to find out what is going on, so there are a couple of websites for you to follow. This first one was the one that I mentioned on the radio on Tuesday http://www.olympics.gornaoryahovitsa.com and then we have just had this one go live this weekend http://www.binkyaidbg.com/ but don't tell Bobby as I will be letting him know about it this coming week.

There was also the craft day on Wednesday, and in the morning there were Inge and Iona showing us all where the fabric shops are in VT. We did try to have a look at the prices of art supplies in the VT University  Art Department. Sadly though that shop was closed, but we did get a tour round the place. It was fascinating to see the mosaics being made, nothing seemed too much trouble for the faculty staff and they were happy to give up their time explaining the processes used. My particular favourite bit was the Lithographic Department, as my Aunt used to be one of the last lithographic printers in the UK. Although she never used stone for her lithographic printing.

Friday saw the return of the Pub Quiz, and even though the turn out could have been better those that made it enjoyed themselves. So much so that they have asked me when the next one is likely to be. I guess that in hindsight Friday might not have been the best of days on which to hold it, as it was also the first day of the smoking ban in Bulgaria. So now there is no smoking inside any bars or restaurants, all smoking had to be done outside. So for our particular venue it meant going up a spiral staircase, and wouldn't you just know it there was a thunderstorm raging. So the smokers were huddled together trying to keep as dry as possible, before traipsing all the way back down the spiral staircase again. 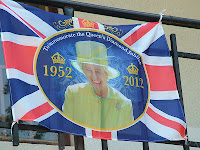 Today marked the Queen's Diamond Jubilee, as the UK and ExPats celebrated 60 years of her reign. We were invited out to a Jubilee party in a neighbouring village, so thanks very much to Ellie and Gary Martin. It was a wonderful day, and attracted press coverage, both TV and print, and I finally got to try some of John Hodge's wonderful baking. Many might know him by the name of The Baker's House, as he used to be a Baker before retiring out here. The weather was wonderful, and you did have to feel sorry for the flotilla sailing up the Thames in the pouring rain. We just had to suffer with the temperatures in the 30s, it was a touch warm to say the least, but the food was good and the company even better, and attracted both Bulgarians as well as ExPats. From the British Embassy in Sofia the Charge d'affaires, Catherine Barber, also attended. So now the Embassy will be fully aware about what we are hoping to achieve with this summer's It's A Knockout, and if we are lucky they might even send a representative down. 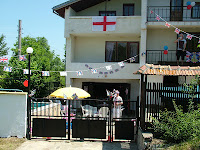 So all in all it has been a busy and varied week for us all, and long may it continue. There's just one thing left to say. God save The Queen :o)
Posted by Unknown at 22:20