What to do when the lights go out

Hopefully none of you got too excited and overcome with emotion at the title of this latest blog. Honest, it's not as bad as it seems. I was only thinking last night, how lucky we have been with the lack of power cuts so far this winter. I have probably jinxed things now, and we will get a massive power outage until the spring, never the less I shall plough on. Now all of you sensible ones have probably got candles and torches situated at convenient points around your houses just waiting for such an eventuality, some like us might even have dual fuel cookers. But in these modern times how do you entertain yourselves? Just think, no lights, no TV, no radio, and worst of all no computer or internet.

Some of the best purchases that we have made, since being here, have been head torches from Popovo market. They give you light and as an added bonus they still leave your hands free, but depending on how long the power will be off how do you entertain yourselves? Last year I came up with a solution for Net and I. 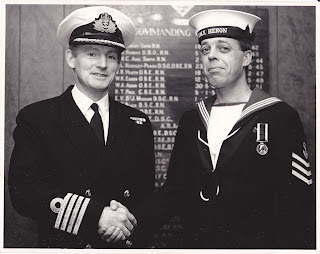 Now some of you may know my background, and some may not, but for 24 years I served in the Royal Navy, and when you are stuck in the middle of the ocean you tended to devise means of entertainment. Stop giggling in the back, and yes that does mean you!!! 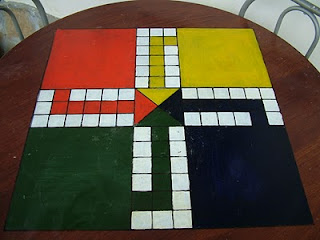 A very popular item of entertainment in messdecks and crew rooms was a game known as Uckers. To the uninitiated it might seem a bit like Ludo, but it is much more strategic than that. It is a game that can be played by 2 or 4 players, and 2 dice are used rather than just 1 as in Ludo. If 2 people are playing they control opposite colours (blue and red against yellow and green), but if 4 people play two teams are formed and team mates sit opposite each other and control their own respective colour. Rules do vary, but I have taught Net the advanced rules (or WAFU rules). The basic objective of the game is to get all of your pieces out, round the board in a clockwise direction, up the chute and home. Not only do you want to get your pieces home, you also want to prevent your opponent doing the same with theirs. This can be done by the use of blobs, which will prevent their progress. You can see one of the Uckers boards that we have made, using the top of one of our patio tables. It wasn't ideal bringing it in and out, so I have also made one on a flat board which is much easier to carry indoors. Before anyone asks the results haven't all been one sided, as Net has won quite a few games. No 8 piecings in the pen so far, or even any up boards, but we live in hope.

If anyone is interested in making their own Uckers game, here is how we used to do it in the Navy, so some of the slang might be a bit confusing

Apologies to any ex-services reading this, but if anyone's curiosity has been piqued the rules of the game can be found at the following web site.

http://www.uckers.co.uk/index.htm
Posted by Unknown at 16:25