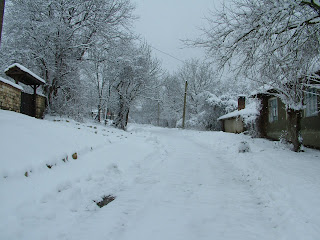 Well here we are, and only a week to go and then we are into February already. As a lot of people will have noticed the snow has returned, I guess that we can't complain too much as the winter has been very mild so far. From the looks of things we won't be able to get out of the village this week, which is a bit annoying as Net has a Doctor's appointment on Wednesday. The tractors were out last night clearing the roads, but we ended up with more snow falling over night. The dogs seem to enjoy the snow, bounding around like things possessed and barking at the snow flakes as they fall. Two of the cats, Albert and Razzy, also enjoy the snow, as they pop up out of the snow and then chase each other, rolling over and over in it like cat shaped snowballs. Once they have tired themselves out, they retire in front of the fires. The cats are up in the top lounge, and the dogs are down in the cellar with us.

Yesterday was pretty much a non-event for me. I felt like death warmed up, running a temperature, glands up, joints aching, and a mouth like the sole of a Nagasaki bomb dodger's flip flop. I was asked "What are they like?", and by all accounts they are a bit like the bottom of a budgie's cage crossed with a Gorilla's armpit. I  could have said like the inside of a Sumo wrestler's loin cloth, but I know a lot read this blog in the morning and I didn't want to spoil your breakfasts. The only place that we have been to contract something like that would have been the Doctor's waiting room. that's the problem with those types of places, they are always full of ill people. Living in a very small village we don't have a lot of daily contact with people, so maybe our immune systems are not as resistant as they used to be. Luckily on our last trip into town we stocked up with anti-biotics and Coldrex. I'm sure that with all of these tablets I will probably rattle when I walk. So yesterday was spent mutually nurse maiding each other, and making sure that we both drank plenty of fluids. We used to boil a kettle on top of the fire, but Net had the good idea about using the coffee maker down in the cellar, so now we can have convenient hot water at either end of the house. Just by luck I had done a big stock up with logs for the fires the previous day, so we were able to spend the day in the warm without having to venture outside apart from feeding the animals. Thank heavens for the internet, and laptops, as we didn't feel cut off from humanity, and with the laptops we could do it all from the comfort of our sickbed. I have managed to catch up on the football goings on and have chatted with some Bulgarian friends on facebook. Thanks Магдалена and Елена! :o) Магдалена has kindly offered to meet us next time that we are in Gabrovo, so that will give us something to look forward to when the weather improves.

I've just had a thought, something that I try not to make a habit of, if I don't fancy driving or the roads still look iffy, I might have to get the bus into town so that I can pay the internet bill, at least that will be later in the week. Somethings we can manage without, but as bad as it is, the internet isn't one of them!! 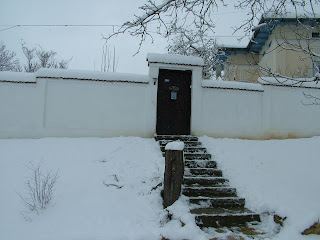 Today I am feeling much more like my normal self, I'm not sure if that's a good thing or not! Net is also slowly getting back to normal, and fussing over me like a mother hen. So far I have managed to get dressed, restock the log baskets, clear the paths, do the animals breakfasts and go round to the shop for bread, and it is only midday. Admittedly I am not doing anything too quickly, as there doesn't seem any point in rushing things just yet. Looking out of the window, I can see that it is still snowing so there will be more to clear tomorrow, and looking at the forecast it isn't going to thaw very quickly. The good news is that it will soon be Spring, and we are already making plans about what we will grow, and what we won't, and where it is all going to happen. Looking on the bright side, if we're going to be ill then this is the time of year to do it, as nothing much is happening gardenwise.

Well, I don't know about you all, but I feel the need for a coffee, so I had best end here. So until the next time take good care of yourselves, and remember coughs and sneezes spread diseases!!! :o)
Posted by Unknown at 13:15