So much for the predicted harsh winter 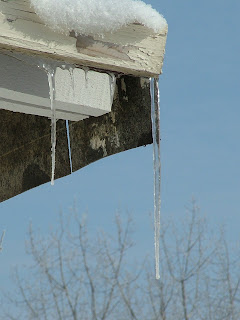 So how has this first week of 2011 treated you all? The weather here in Paisii has been variable to say the least. We have had snow, freezing fog, but best of all today with glorious sunshine and temperatures of 15C. Back in September/October the weather forecasters had been predicting a harsh winter lasting six months. I, for one, am very pleased that they got that one wrong. There is still plenty of time for the big falls of snow to come, but the longer it takes the closer we get to Spring. So far this winter we have only had about 10 inches of snow, so the village tractors have largely been idle. They have been out and about a couple of times clearing the worst of the snow away, but then their large tyres compact the rest which turns to ice and makes getting about difficult. I have just returned from our local shop with fresh bread, and noticed that the road surface is starting to break through the ice in places. So if this thaw continues the roads should be clear come Monday. One thing I like about this time of year, with the thaw and freeze overnight, we do get icicles, something that I can only vaguely remember seeing back in the UK. The two days of freezing fog left the trees looking white and fuzzy, and when the breeze blew you could see ice crystals floating in the air, sparkling like tiny diamonds as they reflected the sunlight.

One of our first visitors, apart from the village children, was Nicolai the water man. He is a very quiet, unassuming man, but always ready to help and he does try to offer me advice about the garden. I just wish that I could understand more of what he says. He always reminds me of one of the Super Mario Brothers with his cap and moustache. He is quite particular with his work when he reads the meter, and before he enters the figures into his book he shows me his calculator and checks that I agree with his readings. I guess that that is one way of finding out if we have a water leak anywhere. In his spare time he also helps out the village Post Mistress, and acts as a fill in postman. As we live just round the corner from the Post Office, the routine seems to be that the post mistress will telephone us and let the phone ring four times if there is anything for us. If there is then we just pop round and pick it up, as happened when we got our 'Red Cross' parcel full of goodies from the UK, and a new photo of our youngest Grand-Daughter. While we are round there we will also check to see if there is any post for Mum and Dad, as that will save them having to come out in the cold.

On a sad note one of our English cats has died. Well she was actually killed by one of the dogs, we don't know exactly how it happened. I had just taken an armful of logs in from the wheelbarrow, and went to get another load when I saw her body in the drive with dog. It was heart breaking and I have never shouted at any of the dogs like I did then just then. She is now buried in the garden in one of her favourite sunning spots. Trying to dig frozen earth is no fun, but I managed it and it was more dignified for her. At least some people had the decency to offer their sympathies, whereas others were more concerned about the dog. Personally, I was all for having the dog put to sleep, but they were all punished and now we are very careful not to let any of the cats and dogs interact. That might not be the best way to go about things, but that is what has been decided. If there is any other re-occurrance then there will be a one way trip to the local vet, but we are hoping that it won't come down to that. Mother nature can be so beautiful on one hand but so cruel on the other.

On a brighter note, another Bulgarian tradition was reported on one of the forums. On January 6th an Eastern Orthodox priest throws a cross into the river. It is believed that the young man who retrieves it will be healthy throughout the coming year, as will all those hardy souls who dance in the icy waters with him. I am pleased to report that I am far to old for any of those shenanigans, and saw no sign of soggy, shivering young men in the village.

Just read that a 3.5 Earthquake has been registered 55km East of Stara Zagora with, luckily, no reported damage. Just another of the joys of living here, by all accounts we have had minor tremors round here, but I can't say that I have felt the earth move for me since being here.

Well soon going to be time for me to follow the football, so I had best sign off for now. Until next time, thank you for reading this far and keep yourselves warm.
Posted by Unknown at 15:04