Some of you will hopefully be aware that today is National Election day here in Bulgaria. This has been brought about by the resignation of Boyko Borisov, and his ruling GERB party back in February. To prevent the country being rudderless the President, Rosen Plevneliev, appointed an interim government in March, headed up by the diplomat Marin Raikov. Many people have said what an excellent job Mr Raikov has done, and wouldn't it be nice if he could be persuaded to stay on. Unfortunately he has always made it clear that he considers the position to be purely temporary. Which brings us rather nicely to today.

The lane which passes outside of our house has been rather busy today, with all manner of vehicles as people go to cast their vote. I think that the last time this lane saw so much traffic would possibly have been the last local elections. It seems as though we are on the most direct route to the polling station at the back of the Kmetstvo. As you can see from the above photo the ladies were outside the polling station ensuring fair play. Although it did somewhat resemble a Women's Institute meeting. They seemed slightly bemused as to why a strange Englishman would be wandering about taking photos. I did try to explain that they would be used in my blog, although whether any of them understood remains to be seen. I am sure that Reni, who owns the main village magazin, knew what I meant as she suddenly turned a bit camera shy.

By all accounts they are expecting quite a high turn out for these elections. The weather certainly helps, as does holding the voting on a Sunday. Maybe that is something that the UK could look at, as there doesn't seem to be the same apathy over here. Even for a small village, such as ours, voting is taken seriously, and it even warrants a Police presence, although that might be to ensure that the ballot box safely gets to where it is going once the polling station closes. As to whether we are permitted to vote in National elections seems to be a bit of a grey area, I think that we are permitted to in the local ones unless they have moved the goal posts again. In all fairness I wouldn't really know who to vote for, as no one seems inclined to make people aware of what their particular party stands for.

So far, from what I can make out, each party pays people to go round and stick their party posters on top of opposing party posters. If they run out of posters then they can always resort to defacing other posters. To them that might be OK, but to my mind I might not be so cynical if they at least tidied up after themselves. Here we are surrounded by beautiful countryside, and bits of campaign posters will soon get blown here and there. Quite soon you will be confronted by the face of Boyko peering out at you from a carrier bag bush. It is one of the few things that really frustrates me about Bulgaria, they don't seem to care about the beauty that surrounds them. All too often when I have pointed out to someone that rubbish goes into a bin, I am confronted by a Bulgarian shrug of the shoulders. It is as if to say that someone else will tidy it up, maybe some will only be happy when the country is knee deep in rubbish. 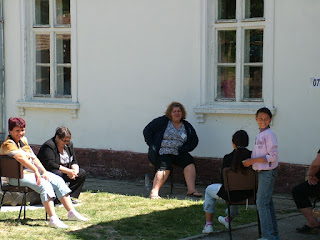 I would like to report that the village has been a hot bed of political debate in the run up to these elections. Unfortunately there doesn't seem to have been any reaction to it at all, apart from the poster wars. It would not surprise me to find out that it has been the same person putting up and defacing all of these posters. The posters themselves will still be in evidence long after these elections have been decided. The only thing that seems to have affected people's lives, was the fact that since 9pm last night no one could buy any alcohol. So all they will have done would have been to stock up beforehand, just so they would have beer and wine today.

Will the elections make a difference? Who knows, and maybe only time will tell, but it is good to see people getting off of their backsides and using their votes. For me today involves more grass cutting, and village life continues much as it normally does, accompanied by the occasional slap as another mosquito bites the dust.