As many of you will know Monday was quite an important day. This was because we had arranged through Daisy that it was going to be the day when we handed over the funds raised by BinkyAid. An appointment had been made to meet the head of hospitals throughout the region, a neurosurgeon by the name of Dr Getsov. It seems quite a novel experience to find a medical man in charge of healthcare and not some shiny trousered accountant. Daisy had arranged for an 11 o'clock appointment for us all. We were not sure how these things are conducted, whether the funds get electronically transferred or if cash is the preferred way. We were assured that cash would make a greater impact with the press, and were also assured that withdrawing anything up to 5000 Leva would attract no fees. This was ideal for us as over the year BinkyAid had managed to raise a grand total of 4930, once shrapnel had been used to round things up.

Knowing what banks are like we thought that it would be best if we got there nice and early. It would have all been so much simpler if the branch in Gorna had stayed open just that little while longer. As it was we arrived in VT for 9AM, and parked up. Normally when you park you can send a text via your mobile and pay the hourly fees that way. I tried this several times with no luck, but fortunately a parking attendant chose that moment to put in an appearance. Despite us being early there was still a queue inside the bank, and so we patiently waited our turn. Eventually we made it to the head of the queue and went to the next available cashier. We explained what we wanted, and this was followed by endless clicking of mouse buttons, and forms being churned out. All of this to withdraw the balance from the account and then close it. The cashier informed us that because it was above 3000 Leva being taken out we had to pay a fee of 40 Leva. Banks don't miss a trick, they charge you to open an account, they charge you monthly fees and then they charge you to take the money out too. No wonder people used to stuff money inside of matresses. We didn't even get a free envelope to put the money in, just this wodge of bank notes pushed across the desk to us. We had over estimated the time that we needed for dealing with the bank, so we had plenty of time for a coffee in the sunshine before meeting Daisy at the hospital.

Sure enough at the appointed time Daisy turned up, we knew that she wouldn't let us down. So we all headed off into the hospital, hoping that someone would remember the way to the Doctor's office. We arrived outside there and Daisy thought it would be a good idea if she let someone know that we were there, so she spoke to the Doctor's secretary. Unfortunately Daisy had been speaking to him directly, and the secretary had nothing written down in his appointments book. She made a quick call to Doctor Getsov and all was explained to her, she did apologise as she lead us into his office but as she didn't know anything about it all, she hadn't made any appointments with the press. I think that both Net and I were secretly relieved, as neither of us go seeking attention, although some would have you believe differently. The Doctor turned up in his green scrubs and white coat, shook hands all round and explained how he intended to utilise the money that BinkyAid had raised. Daisy was translating, and we had to stop him when he mentioned the Children's Ward. Through Daisy we reminded him that this was to be used for equipping ambulances. You could see the penny drop, so there are others out there fund raising. 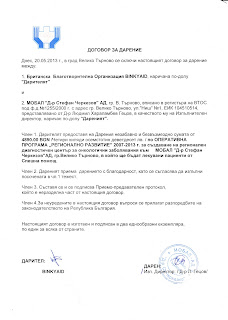 He took us on a tour of the new Accident and Emergency unit that is being built. He seemed ever so proud that various machines were going in the various rooms, and quite rightly so. Although to me it seemed like a lot of medical mumbo jumbo, I did understand X-Ray and MRI scanner. Included in this new department are also ambulances, so we felt that it was ideal that the sum raised be invested here. After all it is something that the community as a whole could benefit from. As we were leaving the department he said that a framed certificate with our names on would be displayed in the waiting room. Again we had to explain that there were a lot more people involved in BinkyAid and not just us, couldn't the certificate just mention BinkyAid? He agreed to this and had words with the hospital's Chief Accountant to that effect. We thought that we had got away quite lightly as we returned to his office, he explained about the certificate once again, and answered the query we had about tax liability, and then he was gone on his rounds again.

While we were waiting for the accountant to sort out the certificate, people were ushered into the office. Bugger they had cameras and microphones and things, we hadn't managed to escape the press after all.
It was explained to us that Bulgarians don't really understand the concept of charity, and so we were being used to illustrate the point. Luckily enough most of the questions that were posed were roughly along the same lines as have been asked before. Daisy could have answered them all for me. For such a big thing to be made about handing over the cash, they insisted that it had to be in an envelope. So as a consequence it now looks like a bung is being handed over, although I am sure that this wouldn't normally happen in front of the press. Once the press had finished with their questions, that was it all done and dusted. I have included some links to the press releases just in case anyone is interested. For the Brits reading this then try using Google translate as they are in Bulgarian, and it will give you a different look at things. For some reason the press reports keep mentioning a round 5000 Leva figure, maybe they had a whip round between themselves after the interview and rounded it up.

All that remains to be said is a very big thank you to all who got involved with BinkyAid, in whatever capacity, no matter how big or small. As without your good selves none of this would have been possible, now we can get on with enjoying our retirement.