Full Of Ups And Downs

It has been a strange week full of ups and downs, even the weather can't decide what it has wanted to do. We have even had a smattering of more snow just over a week ago, this was on the Sunday, and everyone had hoped that we had seen the last of it until next winter. With Monday's arrival we were greeted with bright blue skies, sunshine and heat. We decided to make the most of it, and head off into town and pay the bills and do a bit of shopping. All was going well until we started our journey home. The car, which has normally been so reliable, decided that it was going to let us down. The battery light came on as we passed through Dolna, and that was it, we were stuck at the roadside. Luckily I had been able to get her into a small pull off area, so at least we weren't blocking the road. Opening the bonnet, I did find that I could move the positive terminal on the battery, not that that helped us much. We had to get some assistance, and as far as we are aware there is nothing like the AA or RAC here. We did try phoning our mechanic, who speaks English, but he was in Popovo, his suggestion was to try and get someone to give us a tow to his garage, failing that he would get his recovery truck out to pick us up. We had to resort to phoning Dad to come and give us a hand. he turned up, closely followed by Tony and Diana, this was helpful as between us we were able to cobble enough tools together to remove the battery.  Even though it might not have been the battery causing the problem, we decided that it would be worthwhile to get a new one. Dad and I went to get one, while Net stayed with the car. While we were gone Yolanta turned up and kept Net company, and also Peter the mechanic pulled over on his way back to the garage. Dad and I put the replacement battery in, connected it up, and Net started the engine. We still had a fault light so the best option would be to take it to Peter's garage, so with Dad following we set off, and despite not getting there at any great speed we arrived without too many problems. As it wasn't the battery it could only be the belt or the alternator. Peter suspected the latter, but said that it wasn't a problem as he knew a man in Lyaskovets who repaired alternators and he would have all of the parts. We left the car at the garage, and cadged a lift home with Dad. 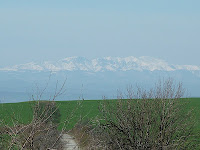 Tuesday was another brilliant morning, which was fortunate as we had been invited out on a mystery tour with Mum and Dad. There was no worry about our car as we were going in theirs, and they would drop us off at the garage once we had finished. Going down the ridge road we could see the distant snow capped mountains in front of us. It is not often that we actually get to see them, and even rarer that we actually have a camera with us. So the day was starting off really well. The first part of the mystery tour was to be a walk along the riverbank. We have driven across various bridges that span the river many times, but we had never actually walked along it. It is surprising just what you can find right on your own doorstep. 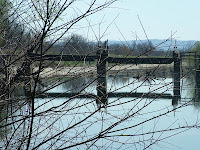 The only sounds that disturbed the silence were the water rushing over the weir and the steady plod of horses and donkeys as they pulled their carts along. Butterflies were already out and about, and they flitted between the wild flowers that were actually brave enough to open. Fishermen were out on the banks trying to catch heaven only knows what, they certainly seem to be a very patient bunch. Unlike the UK there were no signs of rusting shopping trolleys or dead bicycles, but I do wish that they would remember to take their rubbish home with them. It does tend to spoil the beauty that they seem to take for granted, but with the glorious sunshine we were not going to let that spoil our day. 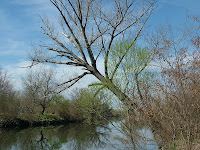 One thing about walking along the riverbank, it does tend to give you an appetite. This led to our next port of call, a small restaurant in Polski Trambesh. Once everyone had recharges their batteries it was time to explore Nikopolis ad Istrum. Another place on our very own doorstep, somewhere that you always felt that it is so close that we can always do it another day. Even for Mum and Dad who have been here for about six years. Situated near the village of Nikyup, the access roads were not brilliant, but then again after the winter what roads in Bulgaria are? 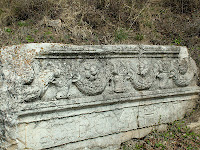 I have to say that you do get an amazing sense of history walking around here amongst the ruins. It has been settled at various times throughout its history. Originally it was built on the order of the Emperor Trajan, to celebrate his victory over the Dacians, and was one of several built across the Balkans. Built along the classic lines of a Roman town of that period, the city's main roads pointed to each of the cardinal compass points. We entered though what would have been the position of the gate in the north wall, and meandered our way towards what would have been the centre of the city, walking on large paving slabs. Who knows how many feet have walked over those same slabs during the course of history. 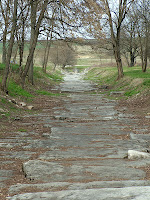 There are plenty of carvings still evident on the surviving masonry, and it is surprising just how clear they still look today. While we were looking at some of the grave monuments it was easy to pick out a face emblazoned on a sunburst. We surmised that it might have been something to do with one of the ancient deitys, possibly Helios who was the sun god in ancient Greek mythology. Some of the inscriptions on the masonry are still clearly legible, and we were able to see both Latin and Greek characters. As it was just the four of us wandering about, the peace and tranquillity was undisturbed. I just hope that the local schools make use of this history right on their doorstep, history would be so much easier to learn about when you can actually see an example with your own eyes. We will definitely take the family there the next time that they come over. I must remember to keep hold of the little ones hands to prevent then disappearing down a culvert that runs underneath the main street. 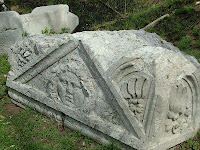 All in all I found it more worthwhile than a trip round Tsaravets, and will gladly return another time. Our trip over, it was back to the garage to find out what was happening with the car. It wasn't ready, as the chap in Lyaskovets didn't have the parts. Peter had managed to order them and was just waiting for them to turn up. They arrived on the Wednesday, and although the alternator worked on the bench, it didn't work in the car, so Peter got one from a scrapyard. We had the phone call, letting us know that the car was ready to be collected, but decided to wait until Thursday as Mum and Dad were going in then and I could scrounge yet another lift. It was early in the morning and I anticipated that I would be back in plenty of time to give a hand taking SillyO down to Yolanta's to keep her appointment with the travelling vet.
As Sod's Law would have it I broke down again on the way home. As I moved out of the way of a flying Dustcart, the car stalled and no matter what I did she refused to start. So back on the phone to Peter, he was going to send out his recovery truck, and I also phoned Net up to let her know what was happening. After a while I was able to restart the car, so had to phone Peter up and cancel the recovery, and finally made it home in time to take SillyO for her appointment.
Between the two of them Net and Yolanta had decided that SillyO and Yolanta's cat, Ringo, were going to be speyed at the same time. Unfortunately Ringo will have to be done at a later date, as she is with kittens, but SillyO has been walking round quite gingerly. She is a lot more mobile than she was, and I have even seen her up a tree.
On Sunday we had our first ramble of the season, and I think that everyone enjoyed themselves. We went for a traipse across fields and up hills around Momin Sbor. It was definitely a case that boots were needed, as we must have all ended up a few inches taller due to the accumulation of mud. At times it was like walking with a pair of diving boots on, our legs must have had a good workout. We were confronted with different weather during the ramble, one minute sunshine and the next hammering down with rain. At the end we all went back to Norma's for a quick drink, but she had done us all proud by laying on a lavish spread. So if you are reading this Norma, once again a very big thank you. The car seems to be behaving itself now, and made it to Momin Sbor and back without a hiccup.
Posted by Unknown at 18:31