I thought that I would let you know about our excursion yesterday. We had planned on going for a day out to Ruse with Peter and Claire, but unfortunately poor Claire wasn't feeling very well so they had to cancel. Net and I were dressed for a day out so decided not to waste the gorgeous weather, so out came the map and the difficult choice of where we wanted to explore. I thought Etara sounded good, as quite a few people have recommended it to us, and it was somewhere that we have been meaning to go but just hadn't got round to it. On the map it looked quite a straight forward journey, but we all know what maps are like. The animals were all sorted out, and the housework had been done so there was nothing to stop us. The car gets parked under the barn at night so it was nice and cool inside, but by the time we had got through the gates and locked up we could tell that it was already warming up.
So with windows open off we set, we were between our village and the next when we could see a figure plodding down the road. It was the 'mad one', we couldn't very well ignore her so pulled up alongside and asked where she was headed. Into Gorna, but she had no hat and no water, and with the weather being without either wasn't a very sensible option, so we said that we would give her a lift, even if it meant a detour for us. All the way into Gorna she didn't pause for breath and insisted on telling all of her extended family news, I'm sure that our ears must have been bleeding by the time that we dropped her off. All was not lost though, as we took the opportunity to have a nervous wee before we left Gorna and got back onto our proper route.
Once on the main road it was straight through to Gabrovo. We did pass a couple of those 'young ladies' in the bright clothes at the roadside. I'm sure that they must be doing traffic surveys or something, and the bright clothes mean that they don't have to wear the hi-vis vests. We got as far as the cafe opposite the turn for Dryanovo monastery, and decided to have a coffee break and some water. Even though we parked in the shade the car was still like an oven when we got back in to continue our journey. We made it to Gabrovo without mishap, or incurring the attentions of the abundant police patrols, and started following the brown signs for Etara. The signs were quite easy to follow, once I got used to the fact that there seemed to be quite a few different spellings, but we arrived none the worse for wear and parked up in the main car park. Just over the road from there we saw a restaurant, and decided that it was about lunchtime so headed over and found a table. The food wasn't overly special, the chicken seemed very oily and the coffee strong and bitter, but I did enjoy the garlic bread. 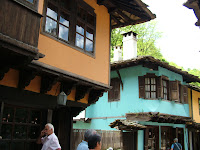 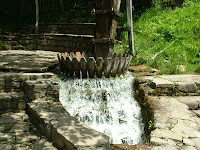 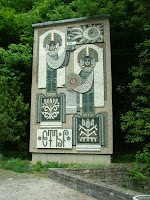 The Ethnographic village only cost 4 Leva a head to enter, which I have to admit is well worth the money. It is like a walk back into history, and as you stroll around at your own pace you can peer in at various workshops and see how things used to be done here. It is a peaceful and tranquil place, with the sound of running water everywhere along with birds singing in the trees above. The main street part reminded me very much of a world heritage village that we visited in the Czech Republic, a place called Cesky Krumlov. Even though it is smaller, I think that Etara is better, here you can feel and see history being brought to life rather than just be a collection of old buildings. You can buy things that the artisans have made, and I have to admit that I did buy myself a new knife to use in the garden. It isn't one of these tourist traps either, where the prices get hiked just for the benefit of the gullible. We did notice several coach parties of school children being shown round, so maybe they will appreciate the rich history that this country has to offer. One of the few places that I  can remember being like this in the UK was the Weald and Downland museum, but I'm not certain if that is still a going concern. 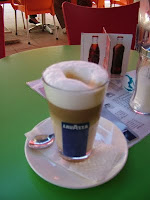 Once we had finished at Etara, it was back into Gabrovo and a well earned coffee, and as you can see it's a latte. It seems like Bulgaria is finally coming to terms with the fact that I like these. When we first arrived here and asked for one we were looked at as though we had grown two heads. Now I know that not only can I get them in Ruse but also in Gabrovo, another reason to like this town.
Sitting outside over coffee is an ideal opportunity to indulge in one of my favourite pastimes, people watching. The main area just up from the clock tower is largely pedestrianised, so people from all walks of life wander backwards and forwards in front of you. Even better next to the cafe they were selling ice cream, so cornets in hand we found a convenient bench to sit and enjoy the late afternoon sunshine. All in all a highly enjoyable day out was had by both of us 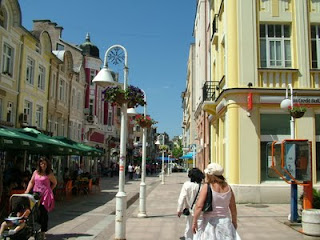 Before I close I would like to take this chance to say thank you to all of you who have taken the time and effort to read these blogs. According to the counter these blogs have been accessed nearly 1500 times, so once again a very big thank you.
Posted by Unknown at 18:27